Ginebra San Miguel has introduced actress, model, and GSM Blue endorser Myrtle Sarrosa as their calendar girl for the year 2018.

Myrtle’s latest project enabled her to allow mixing work and passion for cosplaying with the characters, resulting in five sets of calendars representing each Ginebra San Miguel product: For the Ginebra San Miguel, Myrtle modeled the brand’s iconic angel costume, while on GSM Blue she wore a cyber chic that made her look out of this world. Myrtle then channels an illusionist persona for Primera Light Brandy while she transformed into a forest enchantress for Vino Kulafu, their Chinese wine.

Myrtle Sarrosa’s participation as Ginebra calendar girl also proved how one can live an epic life like her. Aside from being one of the popular cosplayers today, she dons the hats of being an actress, blogger, singer, and VJ to name a few. 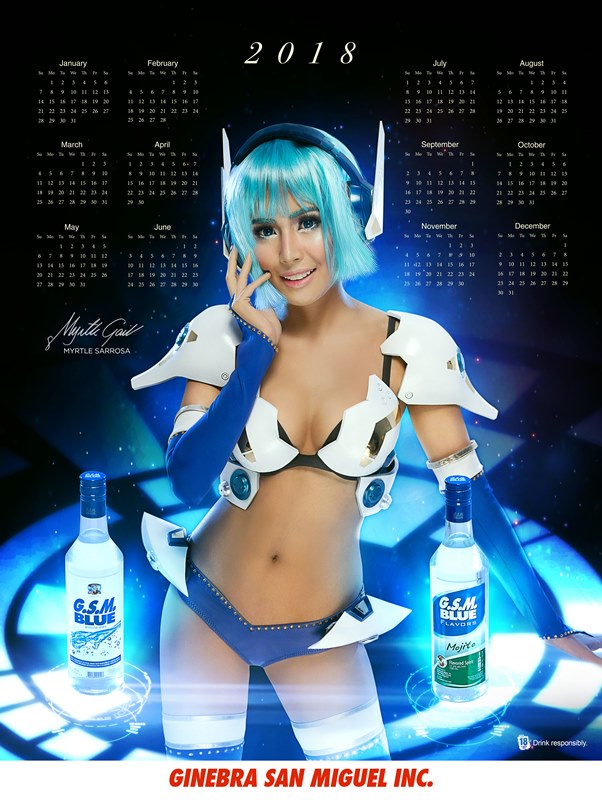 And aside from the big news, Ginebra San Miguel also announced two new flavors for their GSM Blue: Margarita and Gin Pomelo.

GSM Blue Flavors Margarita is the brand’s rendition of the classic drink from Mexico. It comprises the combined tang of lime, sweetness of orange liqueur with lime and distinctive strength of tequila flavor. While on the other hand, GSM Blue Flavors Gin Pomelo is based from the original Pinoy combo of pomelo juice and gin called Gin Pomelo or “Ginpom,” which became a hit in the 90s and compliments the taste palate of Filipino.

GSM Brand Assistant Mira Pontrias said during the launching event that these new flavors give millennials options whether they’re chilling at home or partying with friends, as well as the freedom to mix things up; something that being a millennial is all about.