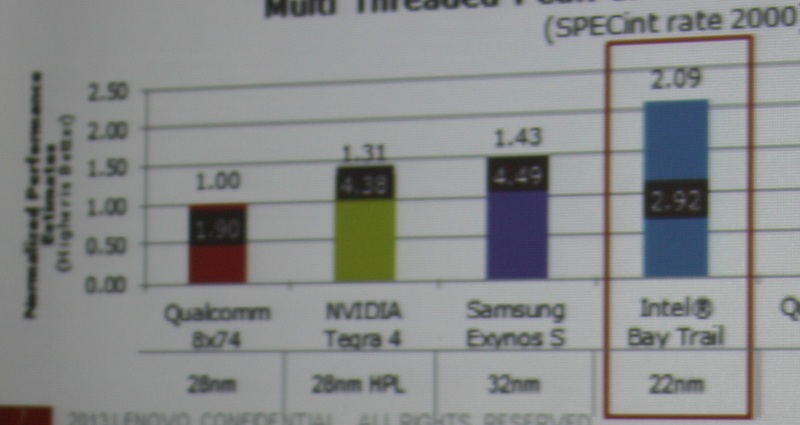 One of the presentation slides that we spotted yesterday at the launch of the Lenovo Miix 2 8” tablet provides an advanced look at the performance of chips that will power top-end smartphones in the coming months. The particular slide (pictured above) is actually meant to highlight the performance of the Intel Bay Trail processor, which in the case of the Miix 2 8”, is a 64-bit Atom Z3740 clocked at 1.3GHz. SPECint 2000, a benchmark application for testing CPU performance, was used to grill Intel’s processor, along with some contemporary chips such as the Qualcomm 8x74 (Snapdragon 800), NVIDIA Tegra 4, and the Samsung Exynos 5. While Intel’s Atom Z3740 has the slowest clock among these processors, we believe that its 64-bit feature significantly helped in making it achieve the highest benchmark score. Noteworthy, in spite of being the highest in terms of processing performance, it also appears that the Z3740 is the most energy efficient in the group as well.

The second half of the table shows more interesting details, as it presents two chips that are not yet officially revealed. These are the Qualcomm 8094 and the Samsung Exynos 6. The NVIDIA Tegra 5, which is actually the K1, was already announced during CES 2014 last January. As highly anticipated as the Galaxy S5, the Exynos 6 has been rumored as the brain of Samsung’s next flagship smartphone. While a previous report suggests that the Exynos chip will be based on the 14nm semiconductor technology, the slide is stating 22nm. Intel’s Atom Z3740 surpassed it in terms of CPU performance, but the results show that the Exynos 6 is a little bit faster than the K1 and the preceding Exynos 5. If we would follow the chart, it means that the Exynos 6 does not present a significant performance improvement over the 32nm dual-core version of the Exynos 5. This should not be the case if the Exynos 6 would actually feature eight cores and 64-bit technology according to the report.

Another thing that is quite questionable about the chart is the item regarding the Qualcomm 8094. Based on our research, the 8094 pertains to the octa-core 64-bit Snapdragon 810 which is yet to be released later this year. The 8094 is anticipated to be manufactured using the 20nm fab process, but the table shows that it is based on 28nm instead. The most recent Qualcomm chip that uses 28nm fab process is the 8084 which points towards the Snapdragon 805 – the successor of the Snapdragon 800. We assume that the chart should be showing the 8084 instead, as it is the logical successor to the 8x74 and the nearest competitor of the K1 and the Exynos 6.

In spite of the perceived inconsistencies, the chart provides an overview of the roadmap which processor manufacturers will take in the months to come: upcoming high-end processors will have eight cores and use 64-bit technology. With these features, upcoming processors will be much faster than the ones that we currently have. MediaTek has already released its own octa-core champion, the MT6592, which powers the likes of the Cherry Mobile Cosmos Z2, Starmobile Diamond X1, and ThL T100 Monkey King II. Earlier this month, MediaTek announced the MT6595 which is targeted towards LTE-capable octa-core smartphones.