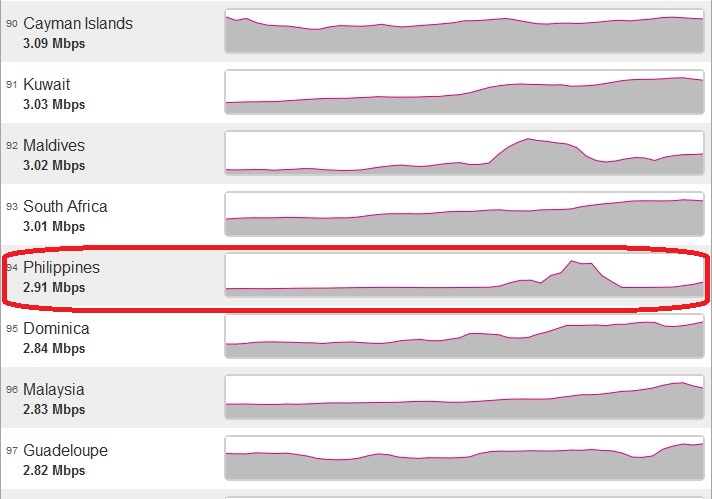 Out of 168 countries, the Philippines ranked 94th worldwide with an average speed of 2.91Mbps on Net Index. Reasonable, but still a far cry from South Korea's 33.70Mbps.

Like the previous Holy Weeks that I had encountered, I chose to stay within the comfort of my humble abode this past Holy Week. I intended to stay home and avoid the hassles of packing up and going out of town. The decision was actually advantageous on my part as I was able to take a rest and clear up my mind.

But part of my vacation was a horrible experience. I had no Internet connection, a matter which bugged me throughout the week. As soon as the problem arose on the 17th of April, we had notified the ISP’s technical support representative (TSR) about the issue so that they could do something about the problem immediately and for us to enjoy the Internet during the vacation. The TSR told us to wait within 24 hours and check out our connectivity from time to time.

We had waited until the 18th until the ISP’s technician called us informing that the onsite visit was cancelled due to area maintenance. Like what the TSR told us, the technician advised us to wait within 24 hours and check out our connectivity from time to time. The 19th and the 20th passed by but no technician appeared to our sight in between our call backs. We decided to give the TSR a ring on the 21st, Maundy Thursday, the beginning of the no-work period. This time, irate, I asked the TSR on the line the reason of the delay. The TSR told me that the technicians were still conducting network maintenance in our area. I told her that the technicians might be doing the opposite and enjoying the holidays considering the lingering absence of our Internet connection. The TSR reasoned out that they do not have a vacation. Like the spiel of the previous TSRs whom we had talked with, the lady on the line courteously and apologetically told me to wait another 24 hours and check out the connection from time to time.

The 22nd, Good Friday, was not even better because my issue remained unresolved. Calling back, this time, I demanded to talk with the supervisor twice. The TSR on the line put me on hold twice and told me that the supervisor was talking with other customers twice. The TSR added that they were receiving a lot of phone calls on that day. I sarcastically told her that other customers might be having the same problem like mine. Attempting to console me, she promised that they will give me a rebate. I asked her the cost of the rebate to see if it can justify the hassle that my absence of Internet connection brought me. But after telling me that I will receive a rebate of less than PhP 200, I was appalled to learn that our pain feels like not properly compensated.

I just thought that our situation might be an isolated one, but every time I saw my neighbours, who have subscribed to the same service, enjoying their Internet connection, the feeling was like an open wound being rubbed with salt.

At the time of writing and publication of this blog, I still have no Internet connection at home. I’m disappointed, not with the fact that the Philippines is a country with fairly slow Internet connection. I have no gripes if our country ranked 94th globally with an average connection speed of 2.91Mbps, a far cry from South Korea’s whopping 33.70Mbps. I feel more dissatisfied with the ISPs’ slow responsiveness in resolving their customers’ issues. Although I do not intend to make a sweeping generalization, for me who have experienced such kind of treatment through three different local ISPs, I see that ISPs should also invest in accelerating and enhancing their customer service in the Philippines.