A Techier Look at the Evolution of Gaming

We all have heard of the games that are circulating the gaming industry nowadays with their almost flawless details, epic storylines, and breathtaking cinematics. But have you ever thought of how it all started? What gave those designers the idea to make the very first video game? And most importantly, how did they go about making the first game with the resources that they had?

In 1947, Thomas T. Goldsmith Jr., a physics professor, invented something called “cathode ray tube amusement device” together with Estle Ray Mann. Basically, it was just a machine in which a person uses knobs and buttons to manipulate a cathode ray tube (CRT) beam to simulate firing at "air-borne" targets which was viewed at the CRT screen. Pretty fun, right?

In 1958 William Higinbotham created a game using an oscilloscope and analog computer. The game was called “Tennis for Two” which showed a simplified tennis court from the side, featuring a gravity-controlled ball that needed to be played over the "net". This was one of the earliest forms of games that were made using a cathode ray tube. Watch the following video to see the actual game being played!

I wonder what kids these days will say if you give them something like this for Christmas...

From 1958, we jump to 1972 when Atari made its second game called “Pong” that was available in the arcades and at home. This game got really popular and bred many imitators forcing Atari to come up with Video Computer System or most commonly known as Atari 2600. You could think of it as one of the first “consoles” that was equipped with a processor speed of 1.19MHz and a whopping 128 bytes RAM! Yup, you read that right, 128 bytes of memory. Even a 200-peso USB flash drive today has much more memory than the whole mechanism of Atari 2600 back then.

From that time on, more and more games have been developed and consoles have been modified for better gaming experience. Nintendo released Family Computer which was also known as Famicom that had a slightly faster processor of 1.79MHz than that of Atari. They released the ever-so-popular game Super Mario Brothers. 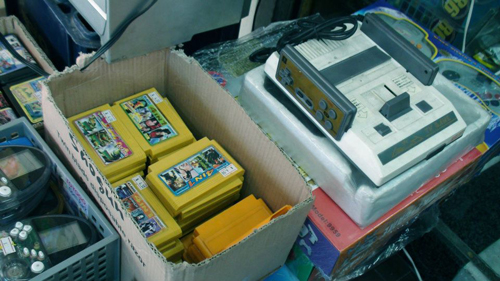 Sony, however, had its PlayStation that had a bigger RAM (2MB). It wasn’t much but I personally remember being really happy and excited when I first got my PlayStation. I remember playing Tekken 2 and it was just too awesome for me to handle.

And then the year 2000 came with consoles like the Xbox 360, Nintendo Wii, and the Playstation 3 that fully supports HD output. This is the period where gaming experience has been redefined. They have amazingly fast processors to support fast rendering of the game like that of Xbox 360 running at 3.2GHz per symmetrical core.

Just from the consoles today, you can now surf the web and play with other gamers from all over the world. Don’t forget that they have cameras to involve your movement and give you that in-game feel. Who would’ve thought from way before that this is going to be the future of gaming?

So what’s my point in writing all these? I just want to personally point out that technology is an ever-changing thing – and for the better, might I add. In a few years’ time, who knows what the game developers would release? So for all the gamers out there, hold on to your seats (that are probably filled with potato chips and soda spills) because I think there are more awesome-packed games that are about to pop out of your HD screens in a couple of years!

Just for fun, watch this impressively-done video about the evolution of games.

A graduate of Digital Filmmaking, he makes videos for HWZ TV. Kevin also writes for the company's website and magazine. An aspiring filmmaker, a music junkie, and a superhero by night.