Not Your Usual Refresh

ASUS, in its quest to retain the title of being the top brand when it comes to motherboards, has recently held a tech seminar to showcase its upcoming boards, which will feature the upcoming Intel chipset for the Haswell or LGA1150 socket refresh. 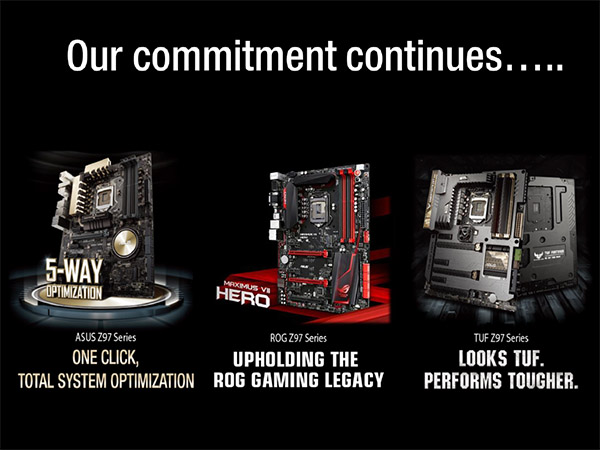 For starters, ASUS currently has three motherboard series, the classic ASUS series, ROG series, and TUF series. ASUS' commitment for innovation and in search of incredible continues for this generation. So without further ado, let’s start with the motherboard madness. 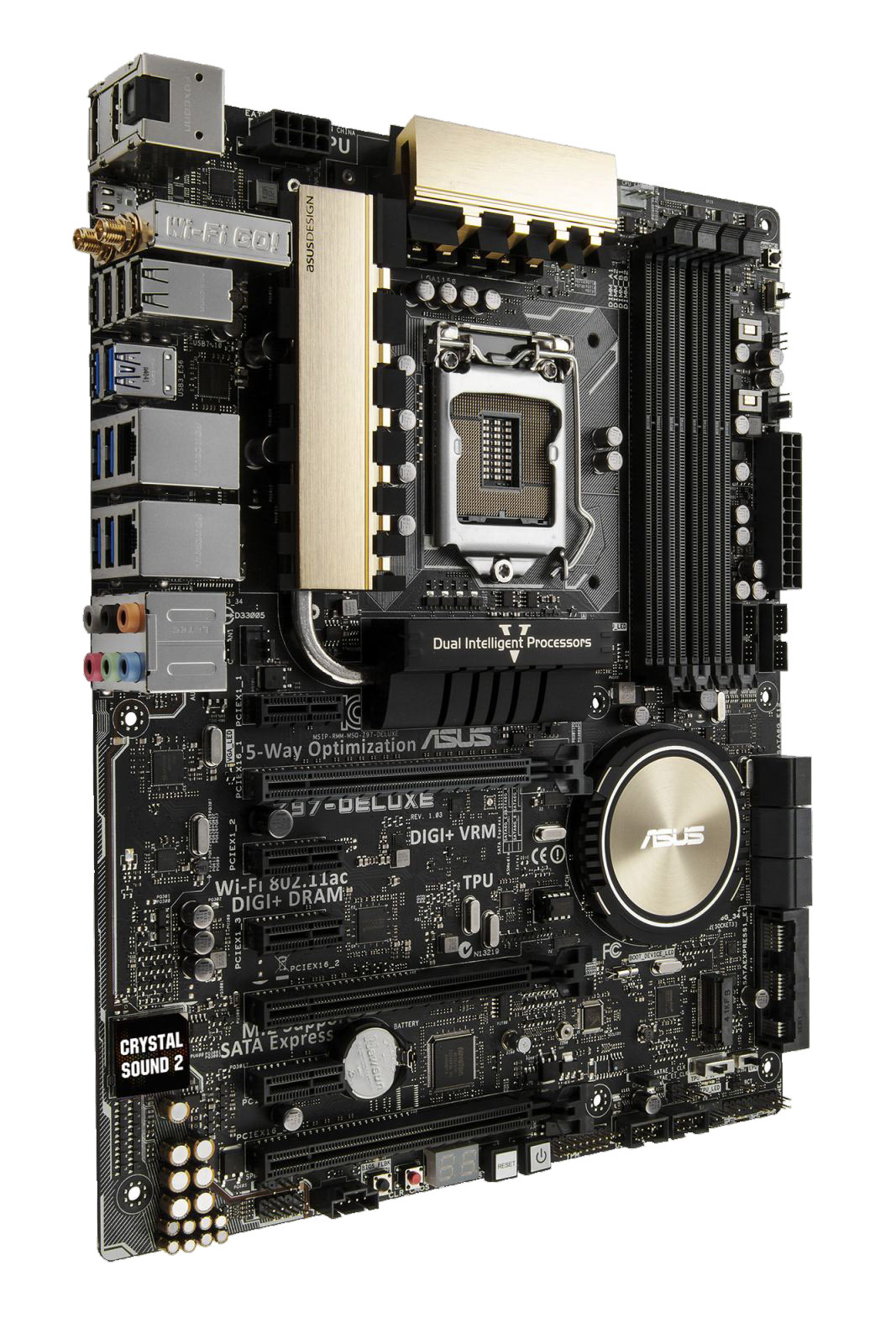 This year, ASUS is focusing on performance, gaming, and better interaction with its new mainstream motherboard lineup. To achieve this, ASUS is bringing in 5-Way Optimization, an improved UEFI BIOS, the latest storage interface, better onboard audio and control over your network connection, ASUS HomeCloud, a taste of the future with its NFC Express 2 and Wireless Qi Charging, and an all new design.

Last year, we’ve seen ASUS deliver with its 4-Way Optimization on the previous Z87 chipset, and now they’re bringing in 5-Way Optimization, which promises to deliver better optimizations to your systems with just a single click.

In essence, it is an upgraded version of the previous 4-Way Optimization with a great addition. Before, we had TPU for performance optimizations, EPU for energy efficiency, Fan Xpert for customized fan control, and DIGI+ Power for precise power control. Adding to the mix is the Turbo App, which lets users customize system performance, audio setup, and network prioritization for every application they have installed in their system. 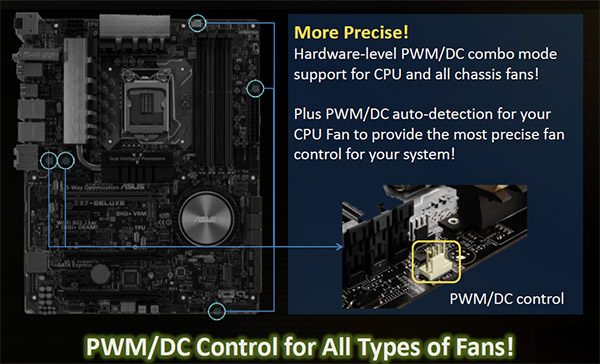 5-Way Optimization not only brings in the Turbo App, but it also brings in new features for the other four pillars. First up, Fan Xpert 3 now lets you control fans using PWM or Voltage control, which means you can control both 4-pin and 3-pin fans. ASUS also added more onboard thermal sensors so you can monitor every vital part of the board and choose which fans to keep running on 100% speed to further optimize cooling and noise. Lastly, an Extreme Quiet mode has been added to allow for very low RPM on fans when you don’t need that much cooling.

For TPU, we see the same onboard 2-phase switch for either ratio or BCLK + ratio boost on your CPU, which works together with the included TPU chip. This combination provides better control when it comes to optimizing your CPU. Also in line with system performance is DIGI+ Power, which lets users adjust how the power delivery system of the board responds to different types of load.

Lastly, we have EPU for efficiency optimizations, which now has detailed CPU Wattage setting and allows users to cut off additional power for the board’ USB and SATA ports to further energy savings. 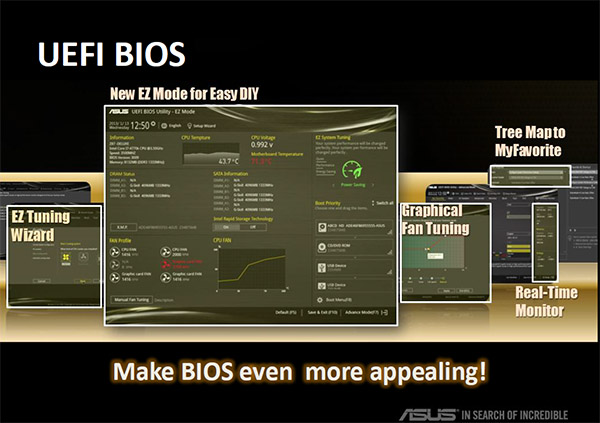 Moving on to the BIOS, ASUS has overhauled its UEFI BIOS for this coming generation. The distance between the traditional blue screen BIOS and UEFI BIOS is getting farther apart since ASUS has come out with a sleek-looking and more appealing BIOS this time. Every detail you need can now easily be located and tweaked with a much more graphic UI. 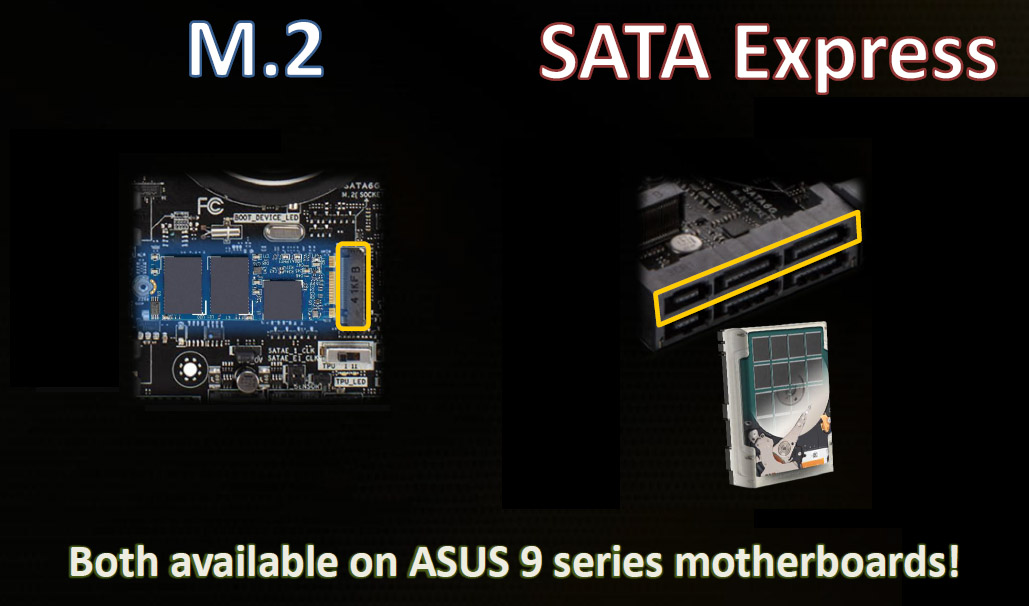 When it comes to storage on motherboards, ASUS is bringing the latest storage interfaces on its 9 series motherboards. Welcome the M.2 and SATA Express standards, both offer up to 10Gbps of transfer speed. ASUS also touts that its implementation of the SATA Express unlocks its full potential thanks to its SRIS architecture and that its HYPER EXPRESS accessory lets you enjoy SATA Express speeds with the use of either two mSATA/M.2 SSDs or two 2.5-inch HDDs or SSDs. 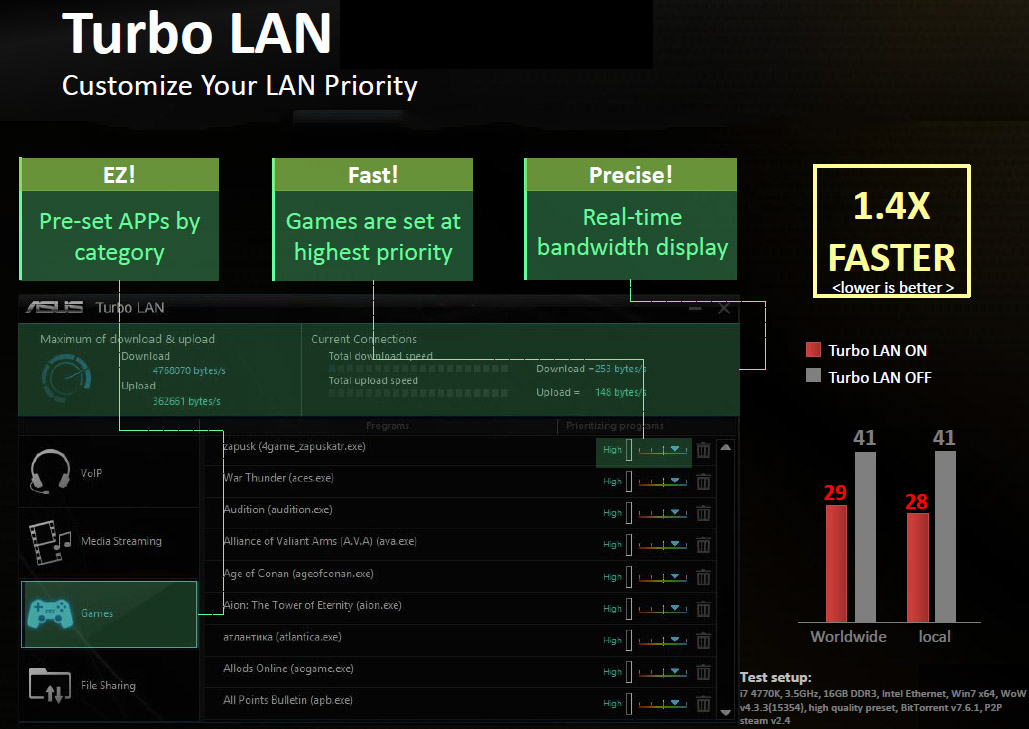 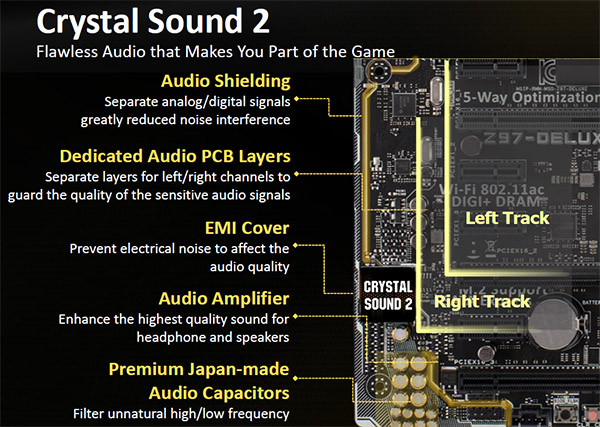 PC gaming has continued to grow over the years and this generation ASUS also ups it game when it comes to providing a better gaming experience. Not only does the new set of boards bring you the Turbo App, there’s also Turbo LAN so you can customize your network and prioritize your games over other applications. Audio is a big part of the gaming experience, which is why ASUS is now introducing the Crystal Sound 2 on its mainstream boards. Onboard audio is now shielded to separate analog and digital signals for lesser noise interference. There’s also dedicated audio PCB layers to separate the left and right channels, an EMI Cover to prevent noise, Audio Amplifier for better quality sound, and Premium Japan-made Audio Capacitors to better filter audio signals.

Cloud storage has also gotten bigger since its introduction to the masses. Tapping into cloud storage is ASUS with the ASUS HomeCloud. Your own PC can now become your own cloud server so you can access your file wherever you might be. HomeCloud also lets you stream media content from your PC to your smart devices with ease. 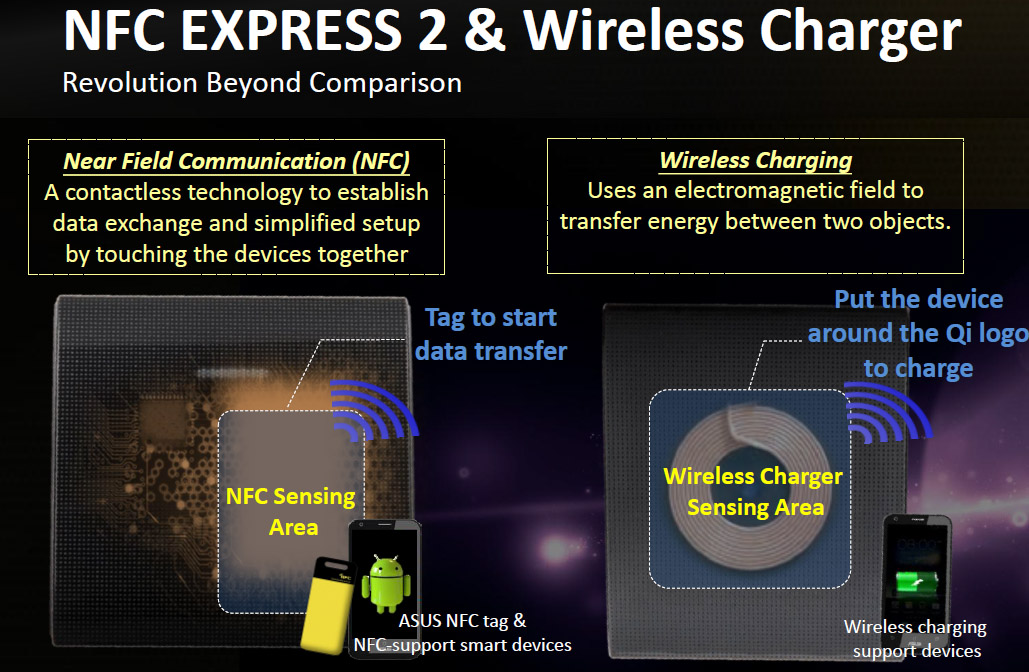 NFC and wireless charging might still not be that wide spread due to the rarity of devices which support these technologies but ASUS believes that going wireless is the future. NFC Express 2 adds in Bluetooth pairing and video-to-go, which lets you stream your music or videos from your PC to your smart device or vice-versa. Aside from these, users will also have access to the existing remote desktop, photo express, Win8 login, and quick launch features of the previous NFC Express. For wireless charging, you’ll need a Qi-certified device.

Here are a few more product shots to get the feel of how the new series looks like. 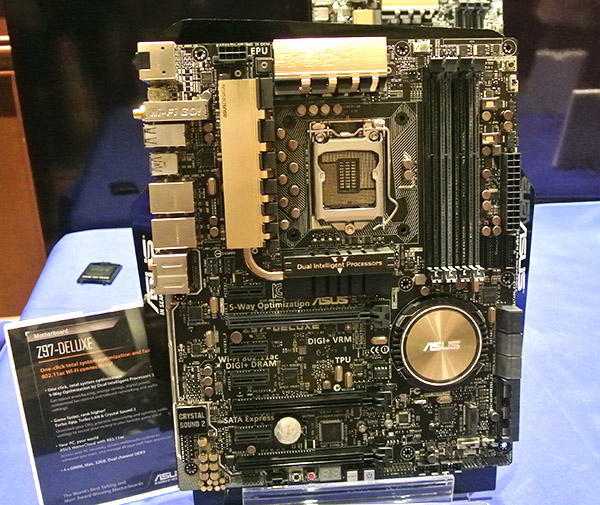 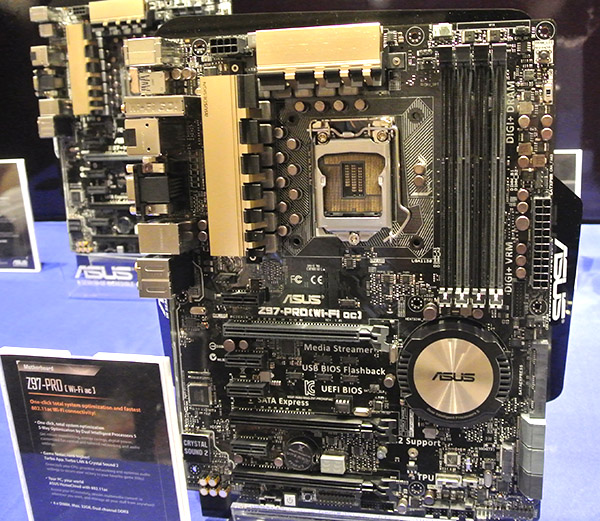 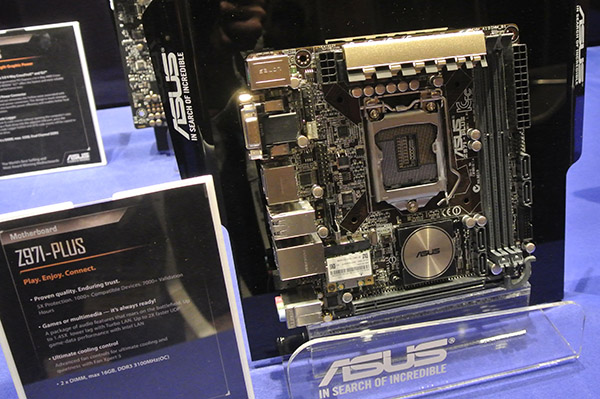 Now that we've covered most of the new things about the upcoming mainstream boards from ASUS, go to the next page to read on about the TUF series.

Stay tuned for exact specs on the new motherboards, we'll update you guys when we get the official spec sheet from ASUS!