TUF or The Ultimate Force is a motherboard line brought to us by ASUS. This series is dedicated to bringing extreme stability and durability, which caters to those who are looking for longevity for their DIY PC. Over the course of its existence, this line of boards have consistently improved to provide users more options while getting great performance and reliability.

Starting from the X58 era, all the way up to Intel's upcoming chipset for the Haswell refresh, the military grade of this lineup has just gotten better and better, or we could say that each new TUF motherboard gets tougher and tougher. The previous generation of the TUF series was well known due to them having the TUF Fortifier, Dust Defenders, Thermal Radar 2, and improved military-grade components. Just like the new mainstream boards, the upcoming TUF boards are also getting a makeover and new features. Starting things off, there is now a dedicated chip, the TUF ICe, which monitors and manages both system and thermal status without eating up precious CPU performance. It is also the one responsible for controlling the fans to keep your system cool. The addition of a dedicated controller on a motherboard is a welcomed addition so that users can absolutely push their CPUs while not taking a performance hit. When ASUS introduced the Thermal Armor on the Sabertooth P67 board, it came with two small fans dedicated to keep onboard components cool. This generation these small fans get an upgrade, they are now bidirectional, which means that they can either push away or draw in air depending on the orientation of their rotation. The ability to rotate either clockwise or counter-clockwise is what ASUS calls the Dust de-Fan feature. As its name suggests, this allows the fans to push out dust to keep your system safe from dust buildup. Thermal Radar 2 is also getting new features and this include the already mentioned Dust de-Fan feature and also the ability to control the fans on your graphics card. Do note that only ASUS GeForce 700 series cards onwards are supported by this feature. The previous features like thermal tuning, thermal status monitoring, and chassis fan control are still part of this software. The TUF Fortifier makes it return to the new Sabertooth and Gryphon boards, but it will be sold as a separate accessory kit for the latter. As its name suggests, it adds fortification to the motherboard, much like how a backplate works to prevent the board from bending or warping. It also brings in additional cooling with its included thermal pads to onboard components such as VRMs. Last but not least are the updates to the onboard components and the addition of the TUF ESD guards. New alloy chokes, Japan-made TUF 10K Ti-Caps, and military-grade MOSFETs with lower RDS are used on the upcoming TUF boards to ensure better stability, higher durability, and greater power efficiency.

Here's a preview of what the new TUF series boards look like, 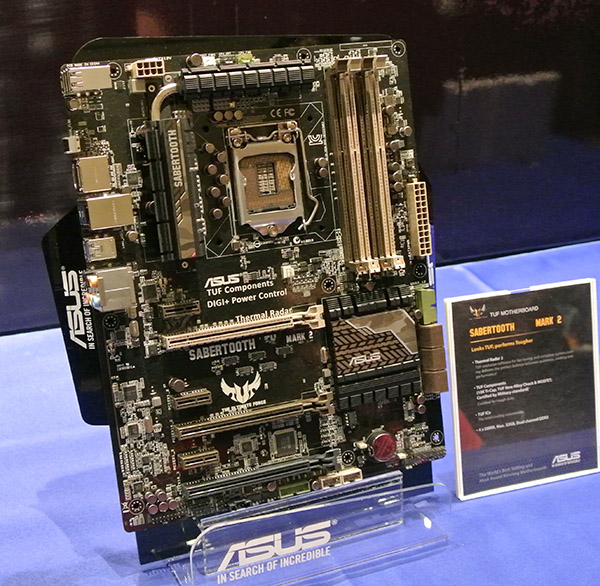 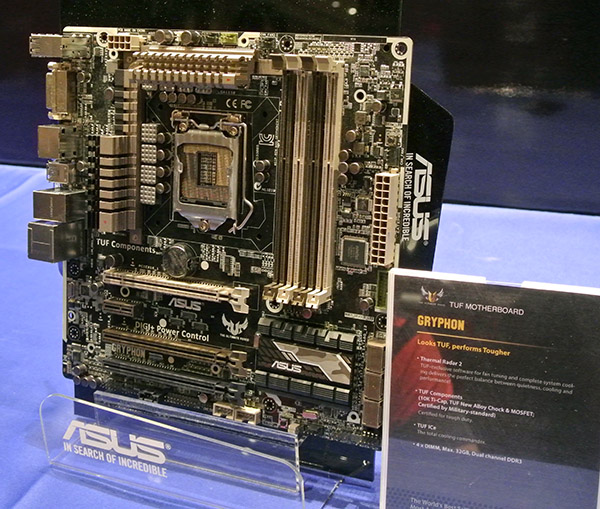 Again, we'll update this article once we get the official specs from ASUS.