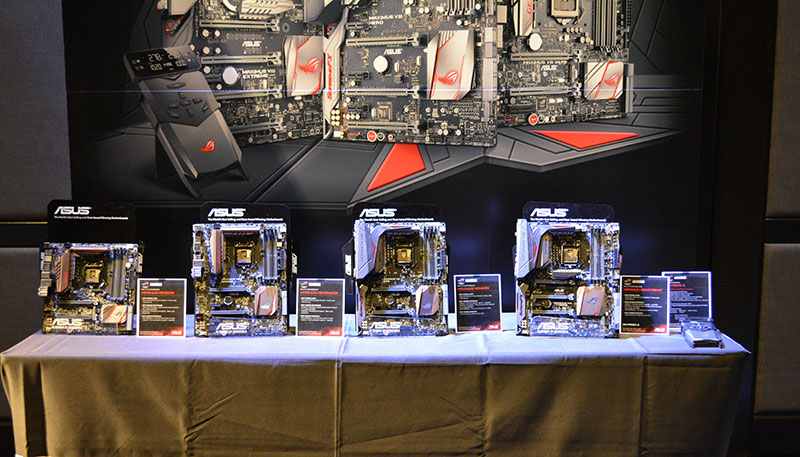 For gamers, ASUS has prepared a total of six ROG Maximus VIII boards and two Pro Gaming boards. As usual, the Maximus VIII Extreme and Formula occupy the high-end, while the Hero and Ranger comprise a more affordable performance segment. The micro-ATX Gene and mini-ITX Impact boards round up the small system builder market.

The aesthetics of the ROG series have also been tweaked to a feature a slate gray color with red accents over the predominantly black-and-color scheme of the previous generation.

The ASUS ROG Z170 Maximus VIII Extreme is targeted at gamers who want the absolute best performance and that's what we've gotten most time with in our preview session. Here's a video overview of what this board offers in a nutshell: 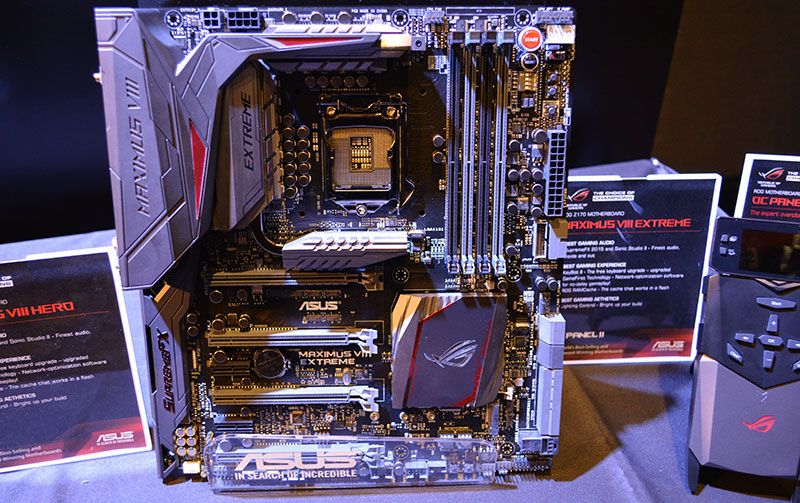 It also features a built-in U.2 connector that allows you to connect an NVMe 2.5-inch SSD without wasting any PCIe slots or using any bulky adapters. The connector runs off a PCIe 3.0 x4 interface, which offers up to 32Gbps of throughput. There is also a Thunderbolt 3.0 connector in the form of a USB Type-C connector on the rear I/O panel. 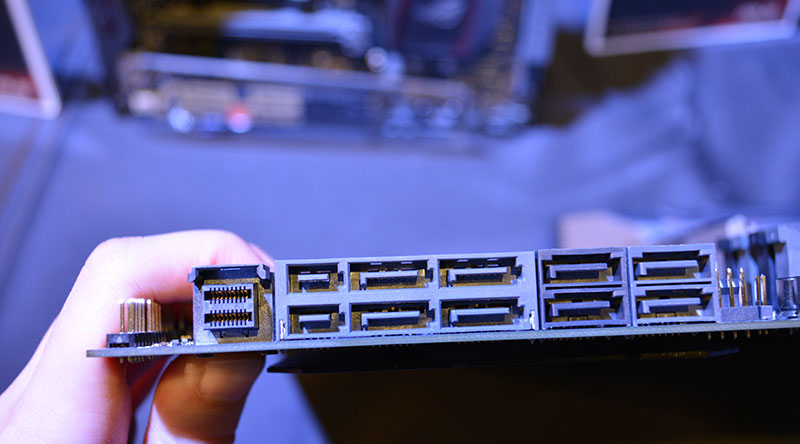 On the other hand, the Maximus VIII Formula is geared toward gamers and PC modders who place aesthetics over performance. ASUS didn’t have the board on display, but from the pictures we saw, it looks like it sports some variant of the Thermal Armor that’s found on the TUF boards. 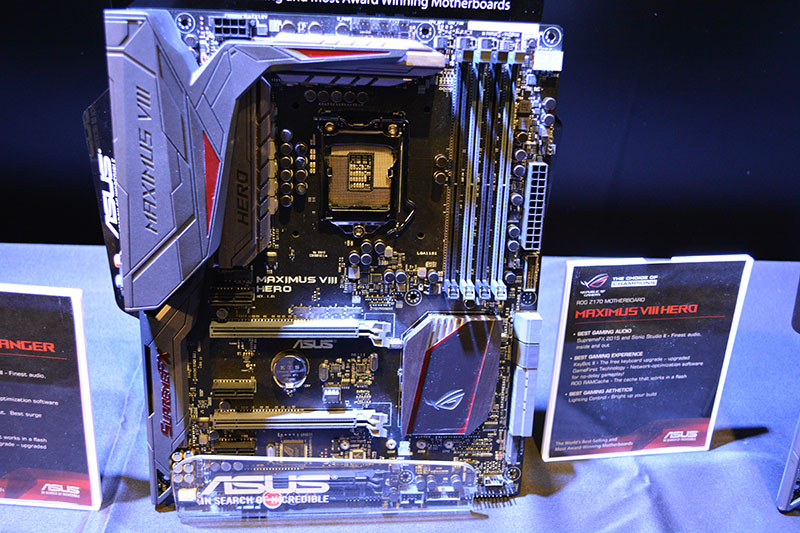 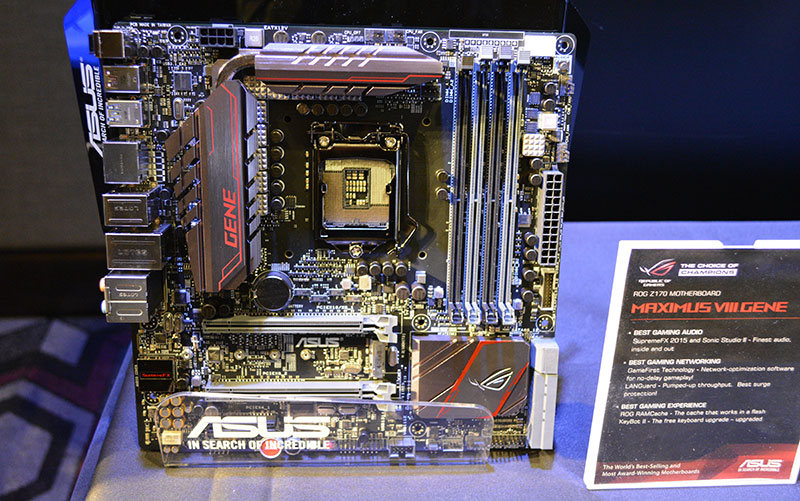 In the Pro Gaming line-up, there is the Z170 Pro Gaming ATX board and the mini-ITX Z170I Pro Gaming, both of which are intended to offer gamers more bang for their buck with a slew of gaming-oriented features. 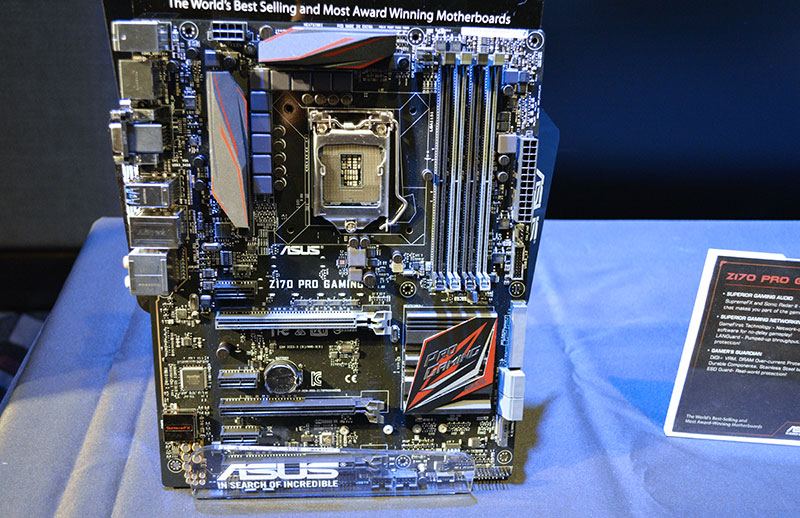 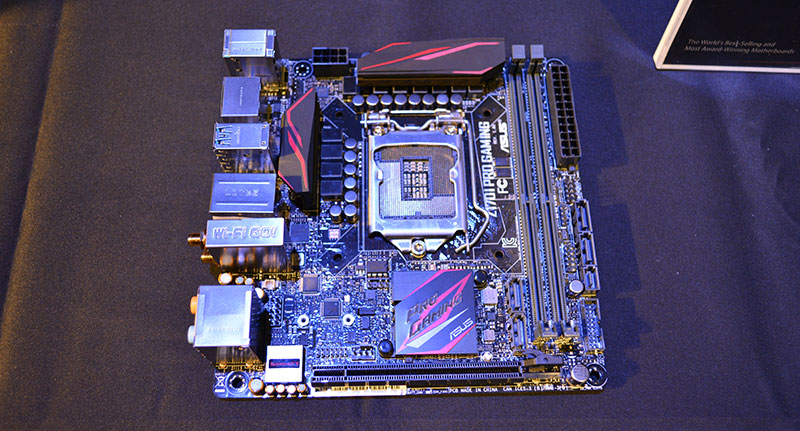 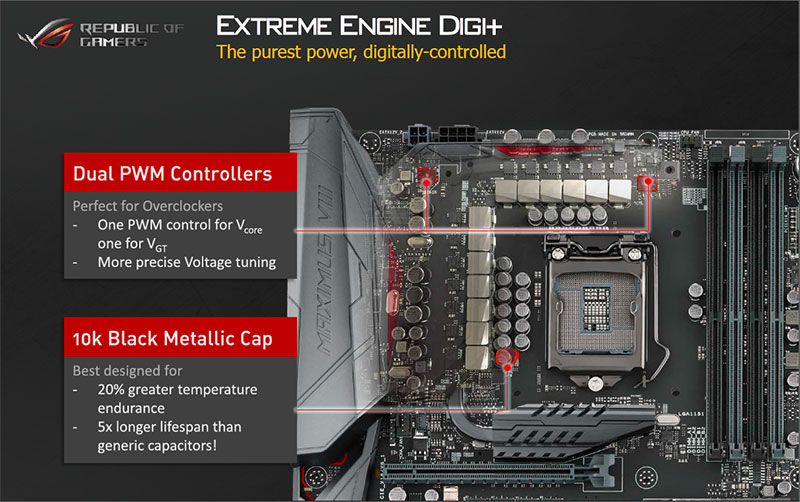 In addition, the capacitors, chokes, and MOSFETs have been selected for greater endurance, efficiency, and performance. 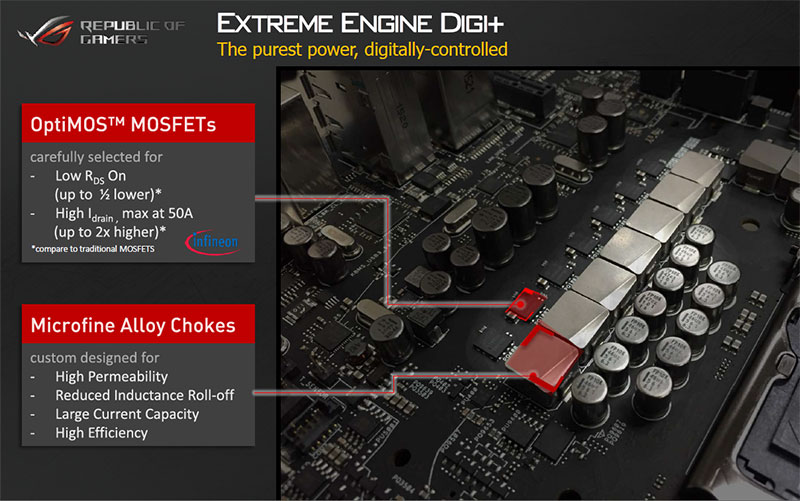 ASUS is also introducing a new feature called ROG RAMCache that provides a quick way to cache frequently used files, or fragments of files, in RAM to speed up access times. If you have excess RAM, RAMCache will use the extra space to expand your disk cache to minimize any performance slowdowns. 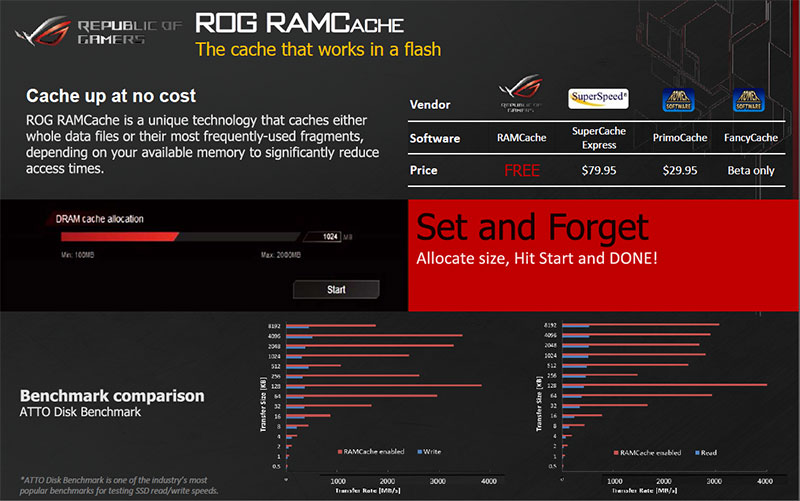 The GameFirst network optimization technology also makes a return on the Z170 ROG and Pro Gaming boards. Gamers will be able to prioritize data packets and bandwidth for online games where low latencies are of paramount importance. In addition, the networking hardware gets a boost with the newer Intel I219-V Ethernet controller, which improves throughput over the older I218-V on previous generation motherboards. 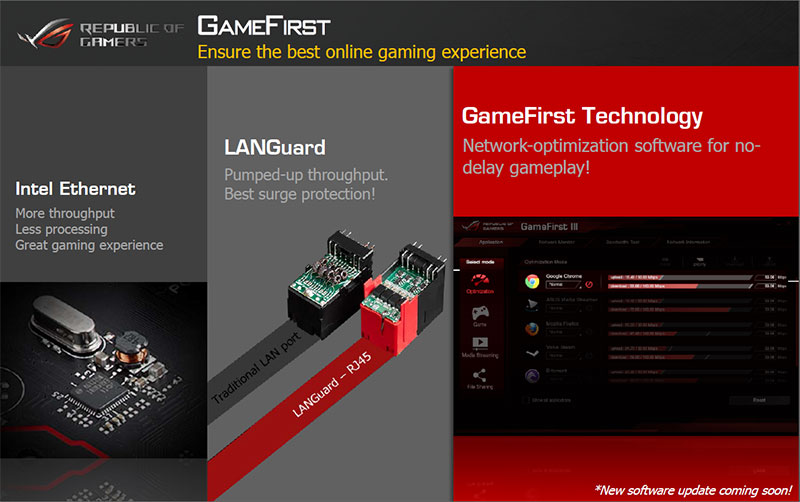 The latest version of the SupremeFX onboard audio uses an ESS ES9023P DAC, high-quality op-amps, Nichicon capacitors, and other quality components to drive headphones up to 600ohms, which includes most audiophile-grade headphones. The ES9023P DAC is also capable of using its own dedicated clock to eliminate jitter for a cleaner audio signal. 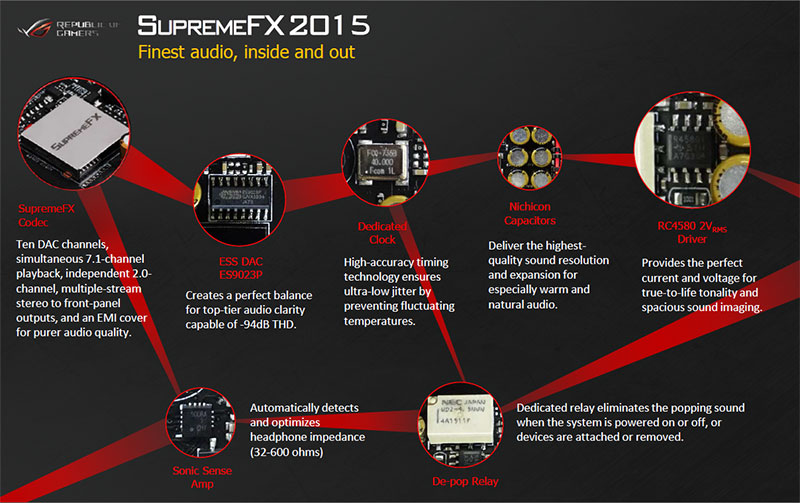 Here's a look at a close-up of the SupremeFX audio circuitry on the Maximus VIII Ranger. The audio hardware is actually shielded under by a plastic shroud on the Hero and Extreme boards so you can't really see the individual components. 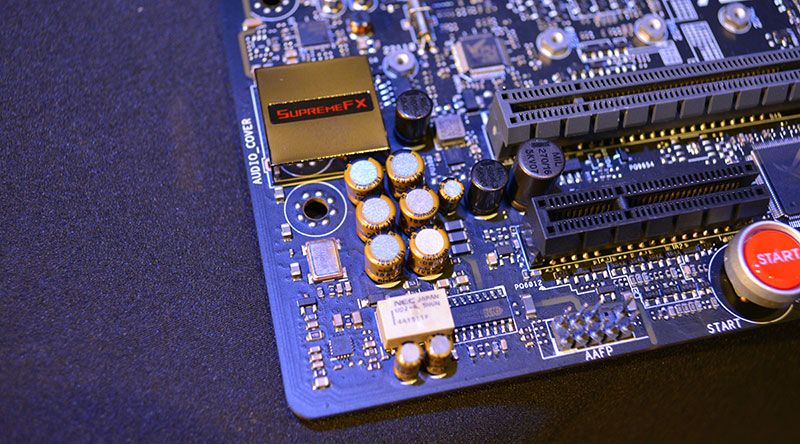 The new Sonic Studio II also includes a Casting Enhancer feature to improve the clarity of your voice recordings while streaming. With noise gate, volume stabilizing, and noise reduction capabilities, it helps you produce clearer recordings by disengaging the microphone when you’re not speaking, evening out large fluctuations in volume and filtering out unwanted background noise. 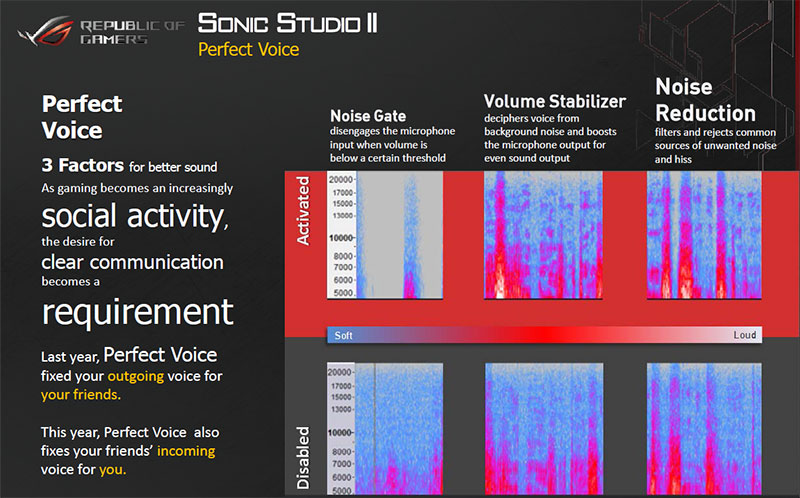 Furthermore, KeyBot gets an upgrade to KeyBot II, which adds the ability to link ASUS’ performance management Turbo App to your keyboard for faster profile switching according to your current usage needs. 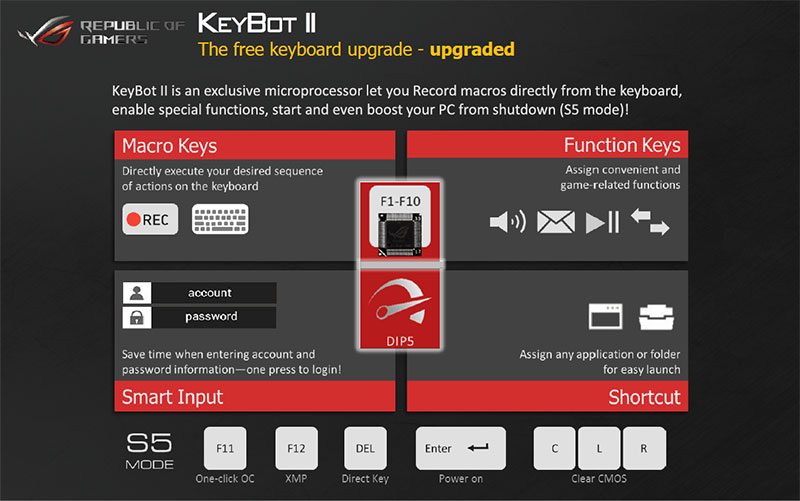 And like the regular Z170 series motherboards, the ROG boards will have onboard LEDs that can be customized with a variety of effects and colors. They can also indicate your CPU temperature and be set to pulse in time with your music. 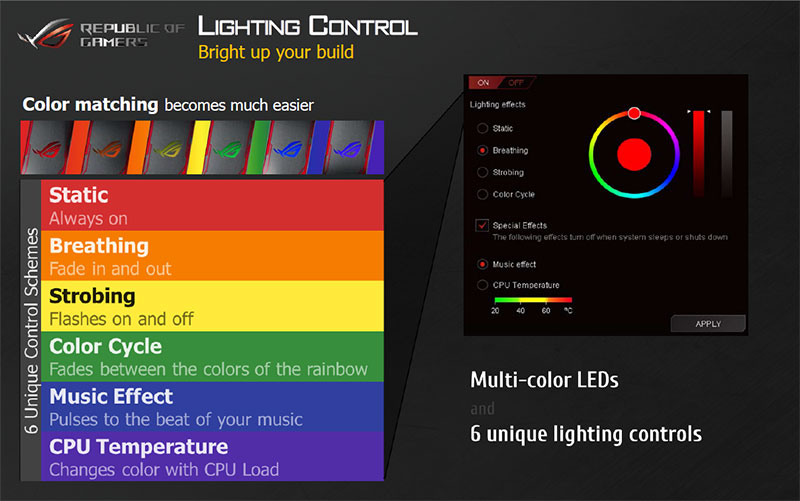 Finally, ASUS showed off a new overclocking tool in the form of the OC Panel II. It introduces a handful of new features over its predecessor, such as safe boot and retry buttons to recover from a failed overclock. There are also four additional four-pin fan headers that allow you to hook up system fans directly to the panel for easier control and monitoring of your fans. The LED-illuminated ROG logo on the panel's front also now serves a functional purpose in that it'll turn off if your system crashes so you know immediately if something's not right. 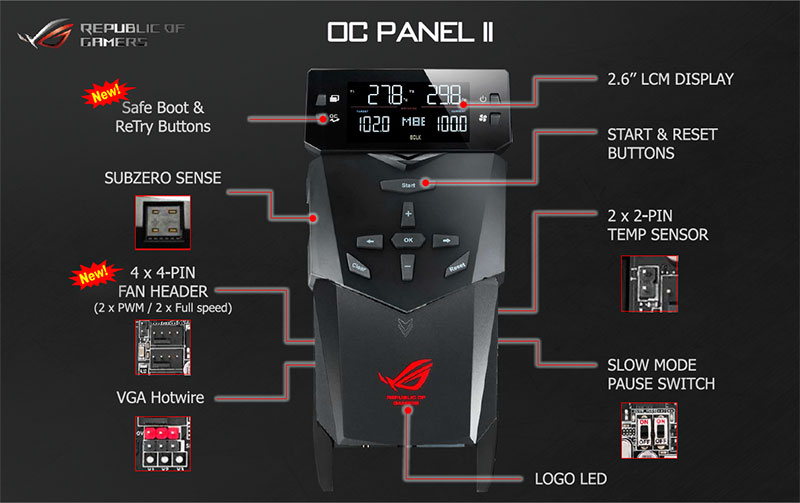