The Best Music FIT for the Active Lifestyle

The Best Music FIT for the Active Lifestyle 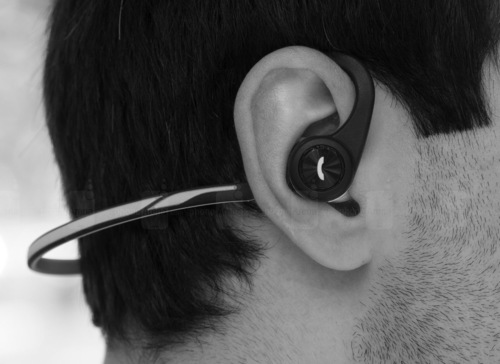 If there is one thing to be said about music, it is that music could be a driving force. It lends power and emotion to many things, from imitations of life such as movies and TV shows, to actual life, such as the scenario in many gyms and dance studios, where music fuels the efforts of people pushing themselves harder and further than before.

This is why there is a need for headphones that deliver excellent sound quality while providing the least amount of stress and discomfort when worn, particularly for long periods of time. Activities that require effort, such as gym workouts, endurance training, and dancing require focus and willful persistence, and more often than not, people use music as a driving force to help them focus and maintain their concentration, so as to better sustain their persistence.

In this need, the Plantronics Backbeat FIT is a superb choice. The construction shows careful consideration in the design, as the stable ear-hooks are able to keep a firm hold on the ear so as to prevent the headphones from falling off, regardless of the amount of sweat or movement by the one wearing it. 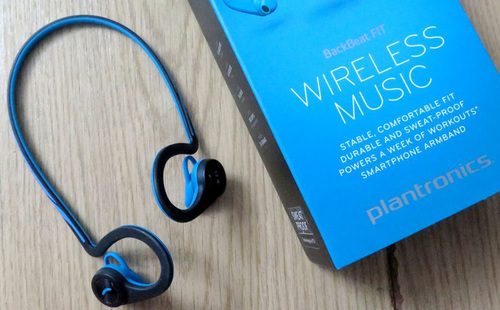 Durability worth talking about

The design allows the material to bend and flex well enough for either fitting properly to your particular head shape, and also for folding and tucking the headphones way in your pocket, without retaining any kind of deformation afterwards. This is a particular point of interest as there are many similar flexible headphones in the market that tend to retain a certain shape when kept or worn in a particular way long enough.

Water and sweat resistance also plays a large part in the flexibility and durability of the headphone material itself. Prolonged or continued exposure to moisture or sweat could promote degradation of the flexible material used in most headphones, leading to some becoming brittle over time. The design of the Plantronics Backbeat FIT allows it to resist soaking or retaining moisture or sweat for up to 30 minutes of non-stop exposure. The ability of the headphones to resist absorption for an extended period contributes greatly to its ability to retain flexibility and also prevents it from developing that "sweaty" pungent odor often associated with gear used in strenuous activities.

While there are headphone and earbud owners who are much more conscientious when it comes to proper removal of their gear, there are those who simply tug and rip off their headphones from their ears once they are done listening. This is one of the leading causes of damage. the dense rubberized audio cable and form-fitting back-of-head design is sturdy enough to resist damage from this practice. The design is such that while the headphones do fit snugly when in use, it can also be easily removed should the wearer wish to do so. It could be worth noting, however, that because the earbuds of the Plantronics Backbeat FIT, there is a tendency for a slight change in the sound profile of the device, although this is mostly negligible at best.

Unlike other sports headphones, however, the Plantronics Backbeat FIT does not come with replaceable tips or stability fins, should there be a need for such in the case of more uniquely shaped ears or head of the wearer. This could prove to be a disappointment for some who prefer to have a change of parts when they want it, although it is not a major pain point for most headphone users.

The controls of the Plantronics Backbeat FIT can be viewed from two different angles depending on the type of person using them. For those who prefer complex and great variation in the range of motions used to manipulate the controls, this headphone could prove to be disappointing, as the controls are quite simplistic in design and in function. For those who prefer uncomplicated and easy-to-remember controls, however, this headphone could be what they have been waiting for. This is particularly true for those who would really prefer to have their focus on what they are doing more than in trying to tweak their audio for whatever reason.

There would also be the consideration of how hot the ear area would be while wearing this headphone, particularly when worn during an intense workout, while dancing, or in the middle of endurance training. Although the Plantronics Backbeat FIT snugly hangs onto the ear to prevent falling off, it does not restrict the circulation of air around the ear area. This headphone is breathable enough that it will not make the wearer sweat any more than they usually do when they work out. The material will also not promote chaffing, which is usually an issue with some in-ear phones when the wearer uses them for prolonged periods of time while sweating. 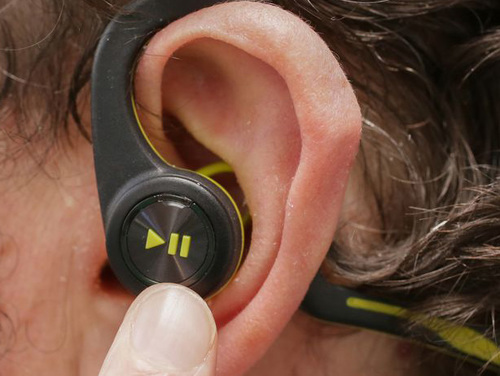 Reasonably sound when it comes to the sound

When it comes to sound quality, this headphone does behave mostly like other similar in-ear phones. Rapid and continuous movement does have the tendency to make the earbuds move quite a bit, which is sure to affect how sound is perceived, particularly when talking about the bass level of the phones. Sounds tests done on this headphone while in the midst of rigorous movement shows that depending on the amount of pressure and contact one has with the earbuds, bass level may vary quite noticeably, which is typical for this type of headphone. Properly fitted in and while the wearer is in moderate movement, the bass level does not tend to fluctuate massively, and the wearer can enjoy a well-balanced bass level. Rigorous movement has a tendency to make the earbuds move, which will change the pressure between it and the ear, leading to a lessening in the deep thump sought from bass-delivering earphones. Similarly, the treble also has a tendency to change when repeated and rigorous movement changes the pressure between the ear and the phones. Well-fitted earbuds delivers a well-balanced treble, complimenting the delivery of the bass superbly.

While the Plantronics Backbeat FIT is decidedly not a headphone designed to have noise isolation or cancellation, the snug in-ear fit does give a sense of external noise cancellation. However, much like the delivery of the bass when in constant rapid motion, there is a tendency for noise to "bleed in" when the in-ear fit is "breached".