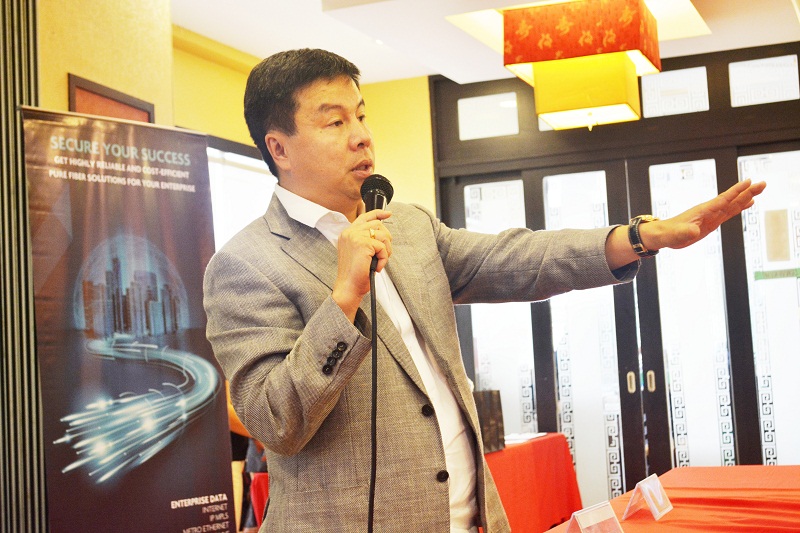 With a vast population of about 110 million Filipinos, the Philippines consists of around 20 million homes. However, less than three million of these are connected to the Internet through broadband, most of which are still relying on a copper cable system, and less than 300,000 of these homes enjoy the faster and more reliable fiber Internet, 200,000 of which are serviced by PLDT. While telco giants Globe and Smart address the deficiency through wireless Internet, we are experiencing network congestion as there are only around 20,000 cell sites available to serve the country’s 100 million mobile phone subscribers. We need at least 100,000 cell sites so that subscribers could get better mobile service.

“So we are really deprived to access the best service in this country. There is still a huge market. The market is very hungry that is why we need to put up the infrastructure. Once you have this information highway, the economy will follow, because the right communications infrastructure is vital to economic growth,” said Dennis Anthony Uy, president and CEO of Converge ICT.

Compared to some of our neighboring countries, the Philippines is far left behind. Singapore and Hong Kong are now 99% connected to the Internet via fiber technology because they are small countries. In addition, their connection is cheaper than us: a 1Gbps connection costs only around PhP 2,400 in Singapore and PhP 1,500 in Hong Kong. Indonesia, an archipelago similar to the Philippines but much larger, is 35-40% connected. Malaysia’s former prime minister Mahathir Mohamad built an information superhighway, connecting the country from end to end, before the culmination of his 22-year old rule. Today, its nearly 30 million inhabitants are enjoying fiber Internet with the government investing in national broadband. The Australian government took over USD 20 billion to build the backbone that can be used by different operators. Infrastructure sharing has been practiced in countries like China, India, and the United States.

“The budget of DICT (Department of Information and Communications Technology) last year is not even a percent of the national budget. It’s just 0.01%. We have a trillion budget and the budget for DICT is just three billion. That should be addressed. We have a lousy broadband service because the old infrastructure is still there, they need to be changed. We should compete with the service and the price. In due time, the price will erode. The more installations, the more rollouts, and the more users, the price will bring down, the more users will connect,” Uy added. 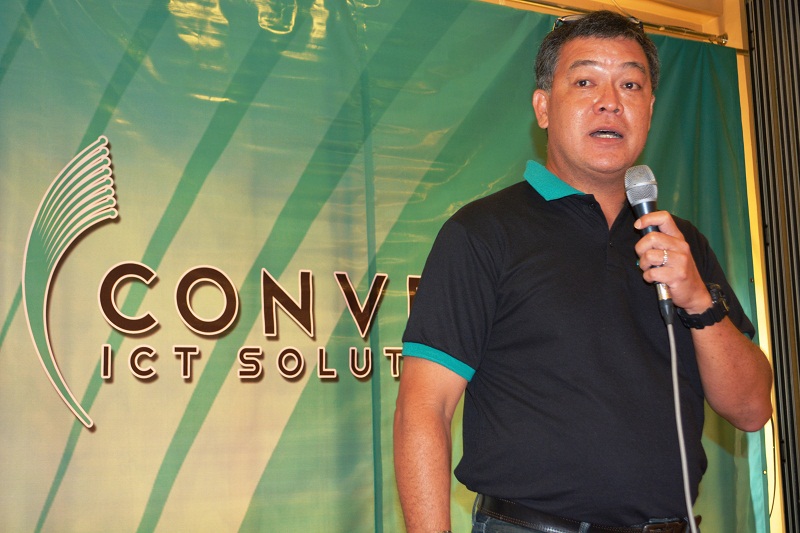 Not just a telco, a technology service provider

Helping in addressing the communications infrastructure and connection problems in the country, Converge ICT, a service provider of various IT products and solutions, is rolling out to consumers a fast Internet service based on pure fiber technology. One of its products, FiberX, offers speeds of up to 20Mbps for just PhP 1,500 monthly with PhP 2,500 one-time installation fee and 24-month lock-in contract.

“In Metro Manila, we operate in pure fiber technology network, and when we say pure, when you order our FiberX service, it’s all fiber inside down to the modem. No frills. Sometimes when you try to buy a data service, you will get confused, you will ask yourself, “Is it fiber or just fiber-fast?” When you’re looking for a service, you simply want it to be fast and reliable, you are not looking for freebies that you don’t need. If you’re not gonna get the freebies, somewhere in the pipeline you’ll see data cap. So what are you gonna do with that high-speed Internet but you have data cap? So when you see our product offerings you will see that there is an installation fee, a monthly fee, and there are no data caps because we do not believe in data caps. So when you say 20Mbps, you can use it as long as you want. How we want to be known to customers: simple, fast, and reliable,” said Jesus Romero, COO of Converge ICT.

Converge ICT is a 24-year old company that started in 1992. It has witnessed important technological milestones that had happened over the years, for example, the shift to digital from analog and coaxial. The company was one of the first to digitize cable infrastructure, allowing them to offer digital TV and Internet. It is also the first to launch GPON and FTTX.

Although it does not want to identify itself as a telco, Converge ICT has everything that a world-class telco requires to operate like marketing and site acquisition. The latter is important in acquiring additional permits to access subdivisions and buildings. The company also has a customer service department and it is working very hard as it is one of its key competitive strategies. Apart from providing Internet connection, Converge ICT’s portfolio also includes hosting, managed services, and supplying of mainframe-grade computing equipment, among many others.

“We don’t actually want to be called a telco because sometimes it is no longer a good word. In the United States or in some other countries, they will call us an MSO (multiservice operator). But the bottom line, we are a service provider and what we ought to do is to solve real problems,” Romero said.

Building its own infrastructure

Converge ICT owns a subsidiary called MetroWorks ICT Construction Inc. which does the construction of its infrastructure, differentiating the company from other service providers or telcos that would typically subcontract. MetroWorks have machines that implement microtrenching (see example video above). While the traditional way of building a fiber network is open trench which is very disruptive and would take one lane of the road, microtrenching is non-disruptive. The machines are just as wide as a person and come with a big wheel that can dig two-inch wide trenches. In these trenches pass microducts that contain 1,000 fibers. The machines can do up to two kilometers of trench in an asphalt road in one day. Of course, if the road is concrete, the process would take much longer. Converge ICT revealed that the cost of its infrastructure per kilometer is PhP 2-million.

“We actually built in fiber optic network and its more than 6,000 kilometers already. This is from northern central Luzon, starting in Metro Manila. In fact, if you are looking at the network today, we are as far north as Baguio and as far south as Balayan, Batangas. We design the backbone to be fully redundant,” Romero explained.

Converge ICT’s existing backbone is in Metro Manila, beginning in Valenzuela down to Las Pinas, Muntinlupa. As of last week, the company has been putting a lot of networks in Las Pinas subdivisions. Outside Metro Manila, the service provider is trying to get to Nasugbu in Batangas. It is already in Naic, Cavite and is almost reaching San Fernando, La Union.

In terms of its international backbone, Converge ICT cannot own an international network at the moment. In the meantime the company is working with other telcos in the Philippines, using diverse cables from PLDT and Globe. Some of the submarine cable stations that Converge ICT utilizes are located in Bicol, La Union, Batangas, and Cavite. It also owns data centers located in Pasig and Clark. Converge ICT is aiming to connect Luzon, Visayas, and Mindanao through an 800-kilometer long subsea cable that will cost USD 50 million. Its CAPEX this year is PhP 2.2-billion. Building a network of customers and a nation of smart cities

Converge ICT may not be well-known among residential customers, but it has several customers in other business segments like education, broadcasting, BPO, hotels, manufacturing, retail, financial institutions, and insurance companies. In order to service all of these customers, Converge ICT is working with various technology and carrier partners.

Another set of important customers of Converge ICT includes government agencies and local government units. One of the key initiatives of the company is smart city projects. Its fiber technology serves as a foundation for CCTVs in cities. MMDA, for example, used to have standard definition CCTVs because it was relying on wireless transmission. But with Converge ICT’s fiber technology, MMDA is now using high definition CCTVs. The company has smart city initiatives in Manila, Quezon City, and Baguio.

“We do some partnerships with LGUs to connect the barangays to the city government and for disaster preparedness. When I visited Shanghai in China, for example, the city has 20 million population and 220 districts. Each district has a command center and is connected to the central command center. Nowadays, the crime rate of Shanghai is almost reduced to 0% because they have a "big brother" looking at the citizens. Each street has monitoring devices that can capture your plate number with time stamps and everything is collected to form big data. Everything is recorded that can be implemented for crime prevention and disaster-preparedness. We already have this in Bataan. They use our fiber technology there to monitor entry and exit points. We also did this for APEC summit last year, covering a total of 14 hotels, the PICC, and the airports. They were all connected to a media center in just 30 days,” Uy added.

Promising to deliver better Internet connection and other IT services, Converge ICT seems to become a threat to bigger Internet and technology service providers. Uy was asked if there were attempts from other companies to buy Converge ICT.

“There were several attempts from other companies to acquire my company, but this is my passion. We are trying to help the country by building this infrastructure. We are still doing some contribution to the nation building because that is my passion,” Uy concluded.

Learn more about Converge ICT's fiber technology and the available plans for homes, SMEs, and enterprises at www.convergeict.com.