On one rare occasion, ASUS Chairman Mr. Jonney Shih appeared before the international media at a pre-Computex 2011 event which was held at the Le Meridien hotel in Taipei City today. During the affair, Mr. Shih showcased new innovations, which included the new UX notebook, the refreshed N Series notebook, the ET2700XVT All-in-One PC, the WAVI Xtion, the Eee PC X101 netbook, the Eee Pad MeMO 3D, and the Padfone.

Mr. Shih shared with us his dream of ASUS becoming the world’s most admired leading enterprise in the new digital era. The chairman admitted that the company is still far from that status but based on the products that were presented, ASUS is making every effort to keep itself on track and achieve such a grand ambition.

Let us take a look at the innovations that defined ASUS’ recent pre-Computex event in Taipei.

Starting off with the new UX notebook, the new offering is ASUS’ response to the evolving notebook landscape brought about by the continuing success of tablets in the market. Tipped as the company’s current ultrathin, ultralight, ultra-responsive, ultra-powerful, and ultra-beautiful notebook, the new UX notebook presents an artistic design inspired by the finest luxury timepieces, sporting a needle-thin frame, and polished metallic finish.

ASUS ensures that comfort is not compromised by packing this piece of beauty with an oversized isolation keyboard, a smartphone-like touchpad, and extra-durable hinges. Powered by Intel’s Huron River processors, the UX notebook features USB 3.0 with USB Charger+ and weighs 1.1kg. ASUS also boasts that it is the first notebook to carry a SATA III SSD.

The N series notebook sports a glossy, piano-like lid cover framed by a polished metal border. With ASUS’ Instant On feature, the N series notebook can resume in just 2 seconds, yet it can hibernate up to 15 days. The hibernation data is mirrored between the notebook’s hard drive and memory for security. 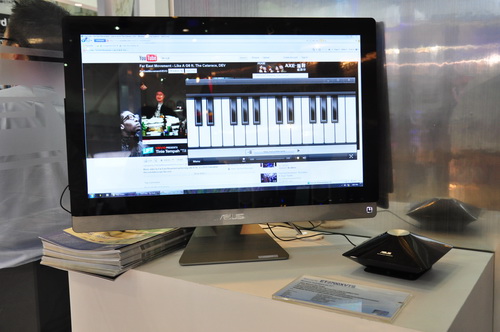 Featuring support for DTS Surround Sensation | UltraPC technology, the aural intensity of the ET2700XVT is further enhanced when watching movies. A great looker in today’s living room, this AiO presents an aura of neatness and slimness with its 27-inch frameless display that has a wide view angle of 178 degrees. ASUS also throws in 10-point multi-touch as an optional feature for the ET2700XVT for a fully consolidated computing experience.

Another result of a fruitful collaboration, ASUS has realized the WAVI Xtion by working closely with PrimeSense who specializes in motion-sensing technology. The world’s first and only open-source, controller-free, gesture-based device for PC, the WAVI Xtion enables users to play games, manipulate desktop content, and browse the Internet by just using hand and body movements.

Through this innovation from ASUS, the user achieves a deeper sense of immersion when using his or her computer with a huge display. ASUS bundles the WAVI Xtion with games like MayaFit, Beat Booster, and DanceWall. Adding value to the WAVI Xtion, users can get new games and utilities that are supported through the Xtion portal.

ASUS’ pre-Computex event will never be complete without unveiling an update for its Eee PC lineup. This year, ASUS presented the Eee PC X101, which is momentous for the company as it is the first newly launched netbook with a price tag of USD 199 or less than PhP 9,000, if converted to our currency. What makes this netbook less expensive is its use of the MeeGo operating system.

The other MeeGo netbook that we know is the Fujitsu LifeBook MH330, which was anticipated to be sold at less than PhP 20,000. Weighing 950g and measuring 17.6mm thin, the Eee PC X101 will also be on offer with Windows 7 OS and storage option of either HDD or SSD. The netbook sports a 10.1-inch display and powered by an Intel Atom N435 processor.

Designed to be ASUS’ alternative take on the 10-inch tablet, the Eee Pad MeMO 3D is a portrait-oriented device that has a 7-inch multitouch display. Powered by the tablet-optimized Android Honeycomb OS, the MeMO 3D is bundled with a stylus, so users can opt for handwriting input and treat the handheld like their digital personal notepad.

Aside from the stylus, the device also comes with the MeMIC Bluetooth headset that supports call reception and music playback. Putting the MeMO 3D in a landscape position turns it into a glasses-free 3D display, so users can view movies, games, and photos in 3D.

The last but not the least, ASUS’ pre-Computex showcase was top-billed by the much-anticipated Padfone. A combination of two distinct mobile devices, the Padfone offers the best of both worlds by being capable to handle the functions of a smartphone and a tablet. Like an authentic smartphone, the Padfone can make calls, send SMS, instant message, play music, and view emails. Its tablet part can compose emails, do productivity stuff, video conference, browse the Internet, and play videos.

When browsing a website or viewing a photo, the user can have a larger view of the content by just inserting the smartphone to the tablet’s slot. With the Dynamic Display Switch feature, the viewed content on the smartphone is automatically fitted to the size of the tablet’s display. Once the battery life of the smartphone depleted, the tablet can double as a battery charger.