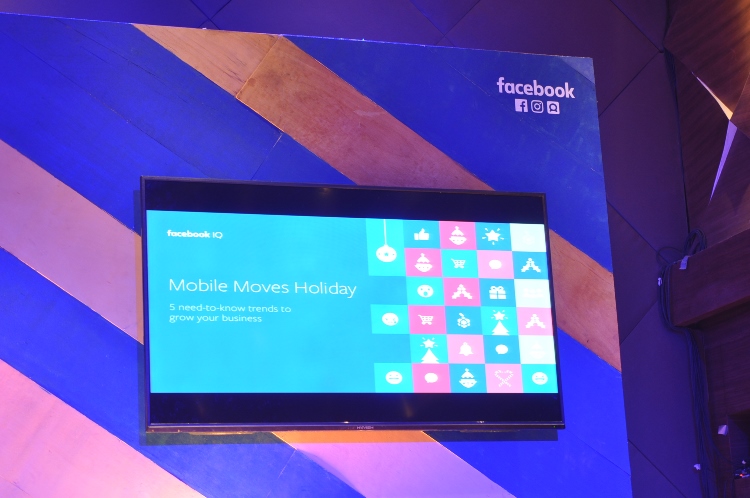 Facebook Mobile Moves Holiday took place last week at Maybank Performing Arts Center in Bonifacio Global City and one of the social networking portal’s agendas during the event is on how does Facebook being harnessed – and can be harnessed – by several Filipino businesses to reach mobile-savvy people during the holiday season.

Kenneth Bishop, the Managing Director of Facebook Southeast Asia shared his insights and the data they gathered during the press briefing held during that morning.  According to the executive, the year 2016 saw the Philippines – the country that has around 59 million mobile active users – with the staggering growth in mobile-cart shoppers across the globe.

Data shows that there are 3 in 5 Filipino shoppers who use mobile in shopping journey during the holiday season. And the new form of screen-shopping has become the norm among Filipinos by simply turning to their phones and browse for their prospect shopping items; thus, making Facebook the top and viable venue as a shopping cart.

Aside from that, 1 of 2 Filipino shoppers relies on their smartphones when shopping in-store to check out the best deals they can get. That said, Bishop has enlisted five need-to-know trending items to grow your business as the Holiday approaches by:

The season for multi-screening. Around 70% of Filipinos on Facebook do multi-screen while watching their favorite programs. While people are already adapting to the habit of having their mobile devices as their second screen whenever they engage in other forms of media and activities (especially television), the strategy is to pair digital with TV and measure right.

Mobile is the New Shopping Cart. That said, businesses are advised to reach out to more potential market in the mobile users' population by speaking the language of mobile and pair the in-store sales with e-Commerce strategy.

Screen-shopping is the modern-day version of the window shopping, which means mobile users don’t need to roam around the malls and shops just to check out the products and sale offerings. That said, they must set the mobile medium as their second front and use it to wage brand campaigns early.

Mobile complements the shopping experience. This is made if businesses will be utilizing the medium to create convenience and drive people into the store. It helps people avoiding the hassles of falling in line. Facebook’s data says 42% of their Filipino users rely on mobile for holiday shopping because of the intense volume of people inside the stores.

Lastly, Christmas isn’t the finish line. In fact, it was during the first weeks of January the next year where sales are reaching skyrocketing levels. Thus, Facebook’s offering solution for business is to bring people back to your stores and do the cross-selling into the New Year.