So far, we've discussed the various panel resolutions you might encounter on retail shelves. Whilst TVs tend to look alike, the technology that drives them can be very dissimilar. In essence, there are two main HDTV categories – LCD and Plasma – to deliberate between. The LCD category is further split into two sub-types – CCFL and LED – depending on the kind of backlights deployed by that manufacturer and make. Furthermore, each HDTV segment has its own share of pros and cons, so remember to choose the one which tailors to your needs. To keep things simple, here's a brief description of each HDTV segment, and what they offer :-

Traditional LCD (Liquid Crystal Display) TVs with CCFL backlights are generally fatter than their more recent LED counterparts. Its deeper girth is attributed to its CCFL (Cold Cathode Fluorescent Lighting) tubes which are generally thicker than LED bulbs. Fundamentally, LCD panels are made up of liquid crystals encased by two glass panes with polarizing filters. These crystals "twist" according to the picture source to allow the appropriate light to pass through. CCFL-based LCDs offer a decent picture quality, and are about 30 to 40 percent cheaper than the LED breeds. Unlike LEDs, however, they lack local dimming capabilities since the light tubes' brightness cannot be individually manipulated, and they're less power efficient as well. Both, CCFL and LED types are prone to backlight bleeds where light seepage is discernible on the panel.

If you're on a shoestring budget, you might want to lean towards the CCFL backlights based TVs since they're inevitably the cheapest of the lot. Take note that on the store shelves, they are commonly referred to as "LCD TVs" while the more expensive cousin is called an "LED TV". The latter is technically wrong since both are LCD TVs but just deploy different backlight types. However for the sake of talking with the less informed people such as the store salesmen, just go with the common lingo. 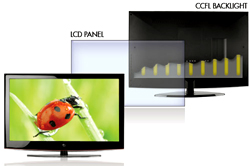 LED-backlit TVs are relatively new to the retail scene having made their entrance only a couple of years ago. The use of LEDs not only improves picture quality as a whole, but it also allows manufacturers to engineer slimmer housings. LED-backlit LCD TVs with direct local dimming features tend to do better than their CCFL-backlit counterparts in aspects such as contrast ratio and black levels.

There are three main LED configurations:-

For the direct example, LEDs are mounted directly behind the panel as shown below. Edge-lit types have LEDs lined along the side of the panel frame. The third Edge-lit option offers "pseudo local dimming", so to speak, since it's able to dim or brighten a general cluster with the help of a light guide plate, but it's unable to target specific areas. LED-backlit TVs have the lowest power consumption, compared to LCD (fluorescent) and Plasma TVs. 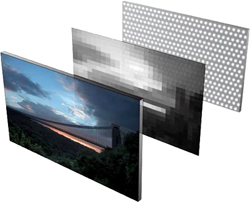 PDPs rely on charged plasma cells to produce a desired picture. Unlike LCDs, they do not require a light source or backlights. Since each pixel is luminiscent on its own, plasma panels are able to achieve accurate blacks and sharp contrasts without suffering from backlight bleeding issues. In addition, plasmas offer the best viewing angles amongst the three TV types, although LED screens have improved remarkably in this aspect as well. High refresh rates is yet another strength of PDPs, which results in minimal motion blur with fast moving sequences. On the other hand, some of its shortfalls include higher power requirements, possible screen burn-in, and deteriorating luminosity over time. Plasma prices have fallen drastically over time, and they're now pretty much comparable to LCD displays. Take note that very affordable plasma panels are available, but they are often just HD-Ready and not Full HD, so do take caution when buying. 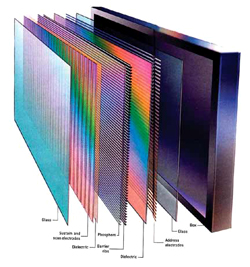