HelloMoto: Lenovo brings Moto Z along with new ecosystem of devices to PH

HelloMoto: Lenovo brings Moto Z along with new ecosystem of devices to PH 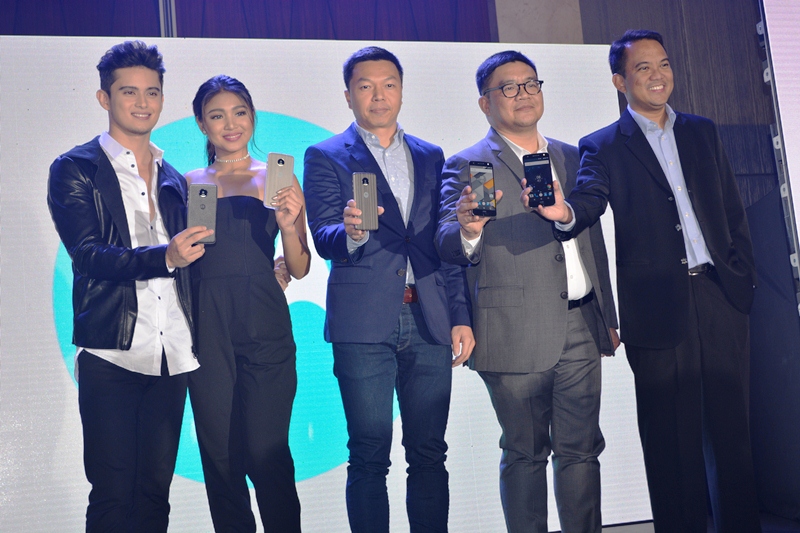 For the past years, Lenovo has been continuously rising as a star in its field and one proof to point that out is its status on the global Fortune 500 list where it moved up more than fifty points in 2015. Consumer awareness-wise, the company has been part of Interbrand’s list of 100 best brands and it is also among the top 50 most socially engaged brands in the world.

Coming a long way over the last ten years, Lenovo progressed from a USD 3-billion Chinese PC player to a USD 46-billion technology powerhouse. This transformation was further propelled with Lenovo’s long history of successful acquisitions and that really helped drive the growth of the company at a very substantial rate. In 2014, Lenovo, acquired Motorola and the company believes that the acquisition will help them ultimately achieve the status of becoming a global smartphone industry leader. At the City of Dreams in Paranaque City, Moto marked its grand re-entry to the Philippine market. 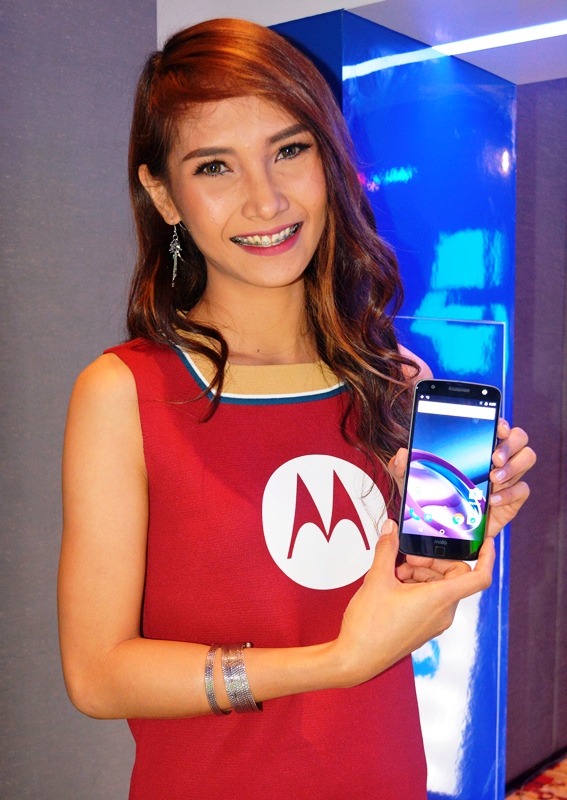 “Tonight is a very important and exciting time for all of us at Lenovo. It is a dawn of a new era in the smartphone industry as we officially launch the return of the iconic Moto brand. You heard it right: Moto. We think it sounds fresh, vibrant, and relevant for today’s tech-savvy generation,” Dino Romano, Country Manager, Lenovo Mobile Business Group Philippines.

Speaking of today’s tech-savvy generation, Lenovo also introduced power celebrity couple James Reid and Nadine Lustre as Moto’s brand ambassadors. “We are going to introduce to you our two brand ambassadors, two of today’s most influential and successful people in the Philippines. Just like Moto, they have the youthful vibrance and charm,” Romano added. 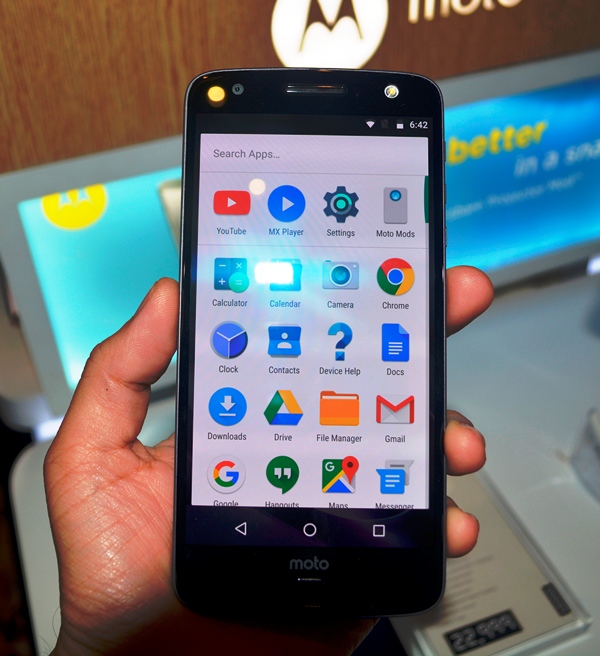 Moto plays a big part of Lenovo’s strategy to achieve its rapid growth and meet its ambitious goals. Likewise, Lenovo also plays an important role in the possible success of the rebirth of the Moto brand, given its vast global resources and a culture built on never standstill attitude that are key for global growth. In order to ensure brand recognition among its consumers and to create excitement around the Moto offerings, Lenovo revealed its intention to bring a unified Moto brand strategy approach to life consistently across its consumer touch points starting off from products then extending it to web, retail, and marketing.

Innovation has always been the talk point in many tech circles, but what does it truly mean when it comes to smartphones?

“For the past decade, looking at all the phones that were introduced, we actually believe that innovation has been incremental at best. The smartphone that we know today has been around since 2007. Can you believe that, it is almost ten years? Most manufacturers have focused on slightly better camera, slightly bigger display, slightly faster processor, and so on. Slightly is no longer acceptable. It has to be something new, something unique, something truly innovative,” according to Vincent dela Cruz, Marketing Manager, Lenovo Mobile Business Group Philippines. 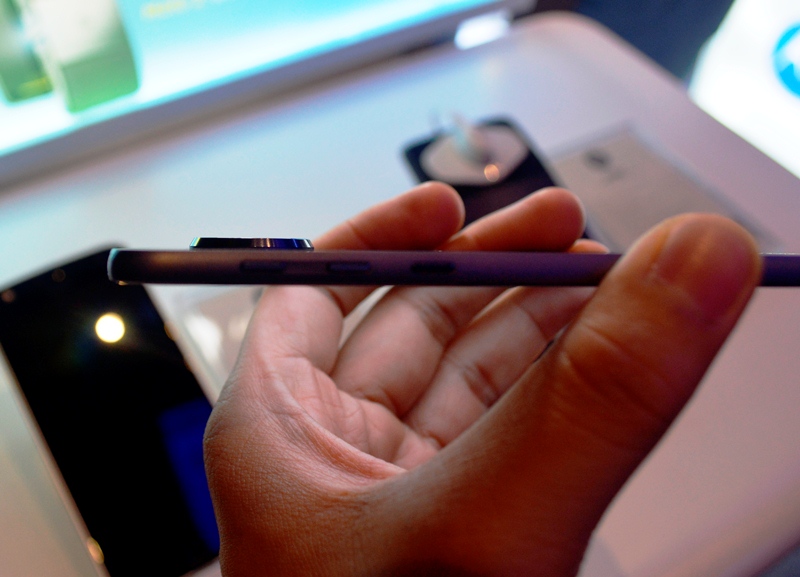 Lenovo observed that many mobile device players have tried to introduce other ways to excite the market. Some competitors have issued modifications to smartphones such as an additional battery pack or a zoom camera, but they are either bulky or not truly integrated. Several manufacturers have tried and failed. Lenovo thought that the only way how to make the smartphone experience better is by creating a smartphone that is more consumer-centric.

“Rather than just focusing on specs, we looked at consumers’ interests and passions, and for most consumers, taking photos is one of the top uses of their smartphone. Most consumers also use their smartphones in browsing the Internet, watching YouTube videos, or listening to music through Spotify. So we believe that these are some of the core interests and passions of our consumers. But simply enjoying these activities with your current mobile phone is not enough. So what we have done is to reimagine what is possible,” dela Cruz added. 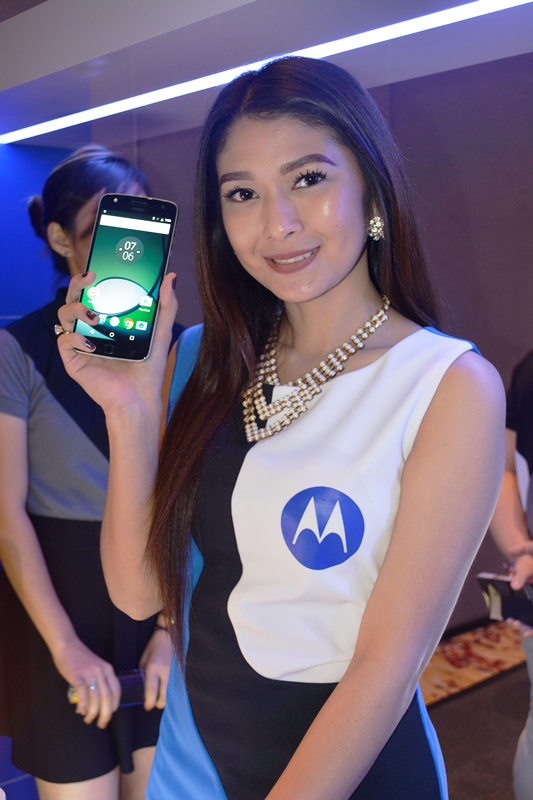 Lenovo’s re-imagination finally resulted in the introduction, not only of a brand new smartphone, but a brand new ecosystem, comprising of the flagship Moto Z and the Moto Z Play along with the Moto Mods. Catering to specific functionalities, the Moto Mods come in a variety of forms: a camera, a projector, and a speaker. Apart from these, there are Moto Mods that allow users to reveal their personality and differentiate style depending on the mood of the day. The Moto Mods have magnetic contacts and are exclusively compatible with the Moto Z and the Moto Z Play. 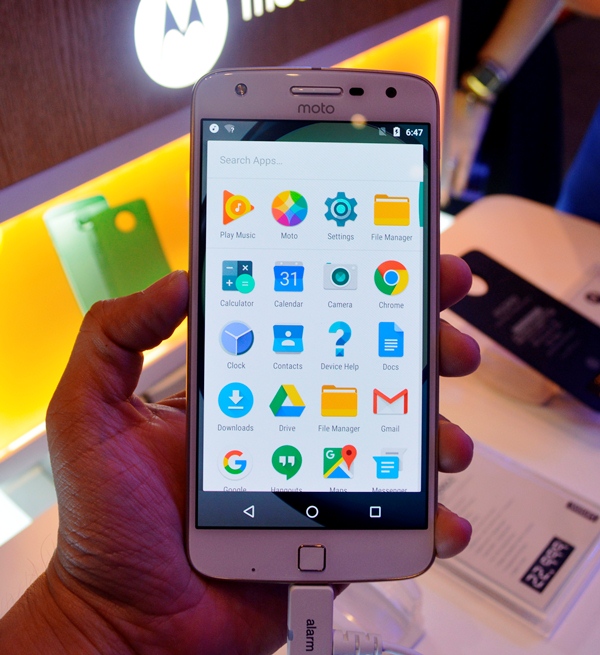 The flagship device, the brand new Moto Z is ultrathin at 5.2mm, sporting a premium yet durable metal design. On its own, it is a very powerful and stylish smartphone, but powered with the Moto Mods, it transforms and becomes so much more. Equipped with a main camera that features optical image stabilization, it allows users to capture crystal-clear photos. The Moto Z also boasts a high-resolution QHD 5.5-inch AMOLED display. The Moto Z also supports 15-minute turbocharging. The other core device that was introduced is the Moto Z Play, coming with a 16-megapixel camera and a 5.5-inch FHD display. Boasting a long battery life, it can last up to ten hours after 15 minutes of turbocharging. The Moto Z costs PhP 33,999, whereas the Moto Z Play sells for PhP 22,999. The two devices are now available in the market. 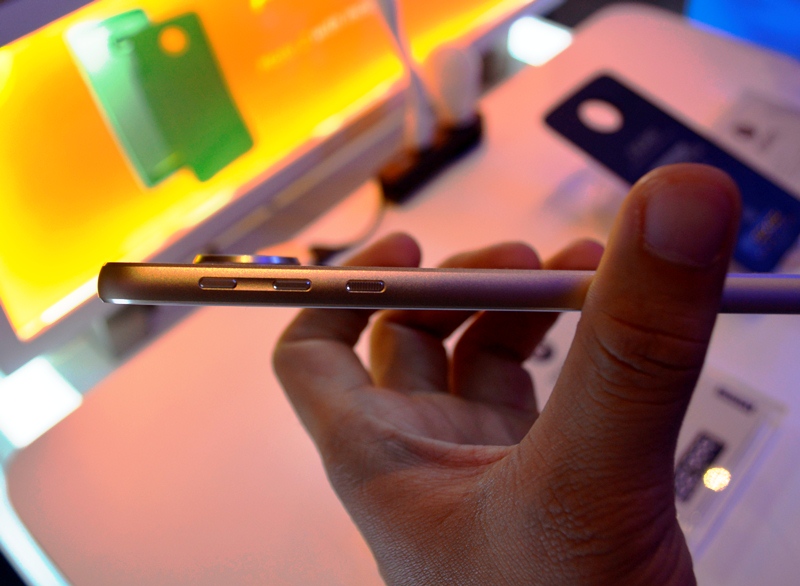 “We believe that the pricing of the Moto Z is very competitive and we are actually slightly lower than most of our competitors here. If you are going to spend PhP 40,000 or PhP 38,000, you’ll only get a phone with other brands. But with the Moto Z and Z Play, you can simply buy a phone and an add-on, a Moto Mod, for the same amount, presenting a great value for consumers,” dela Cruz explained, commenting on the pricing of the devices.

Aside from the phones, what really differentiates these is the ability to retransform quickly and seamlessly. With the Moto Mods, everything happens in a snap. They connect firmly and securely with the help of powerful magnets on the back. There is no need to turn off the power or remove the battery. Simply snap the Moto Mod on, and you’re good to go.

Beginning with the Moto Insta-Share Projector (PhP 14,999), this Moto Mod is for those who want to enjoy videos. It also gives users and opportunity to share the videos with their family, friends, or special someone. Simply snap it on and, within ten seconds, the projector function will be activated. It has 50 lumens of brightness level, enough for a dimly-lit room. It can project up to 70-inch of screen, a lot larger than most of today’s LED and LCD TVs, promising to deliver a new entertainment experience at home. 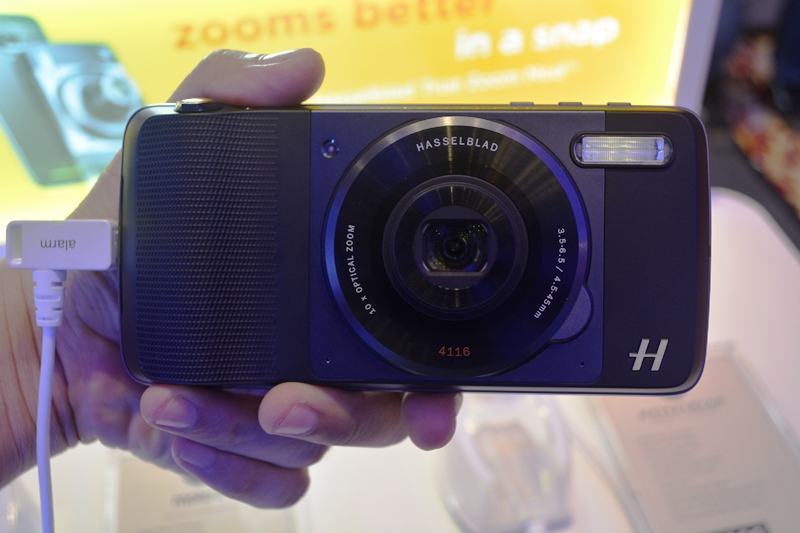 Next up is the Hasselblad True Zoom (PhP 14,099) camera. Carrying the label of one of the most prestigious camera brands out there, this Moto Mod is the product of Hasselblad’s very first exclusive partnership with Lenovo and the very first entry to the mobile device space. The Hasselblad True Zoom adds up to 10x optical zoom to the Moto Z and the Moto Z Play. It also features a physical shutter button, a xenon flash for low-light situations, software features that are unique to Hasselblad, and RAW format capability. 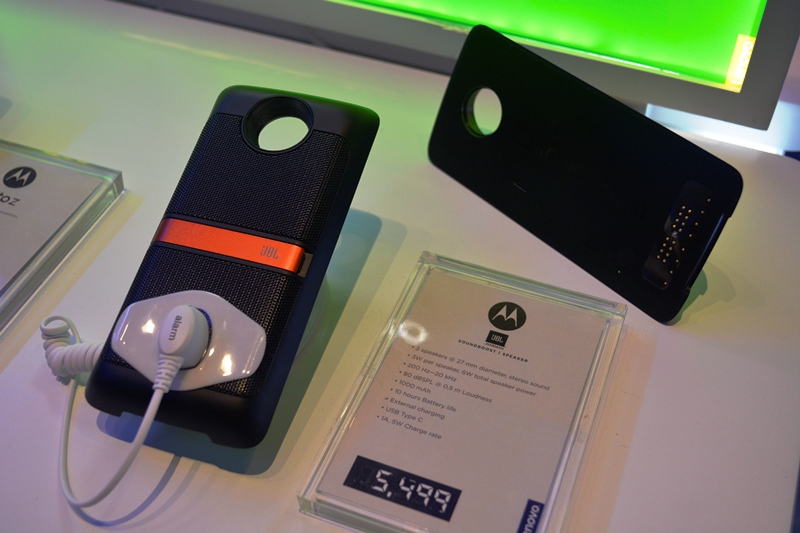 To those who are into listening to music, the JBL Soundboost Speaker (PhP 5,499) is the ideal Moto Mod. It has up to 6W of power output, enough to fill a fairly large room. It also allows users to have up to ten hours of battery and to those of who do conference calls, this Moto Mod also comes with a speakerphone as well. 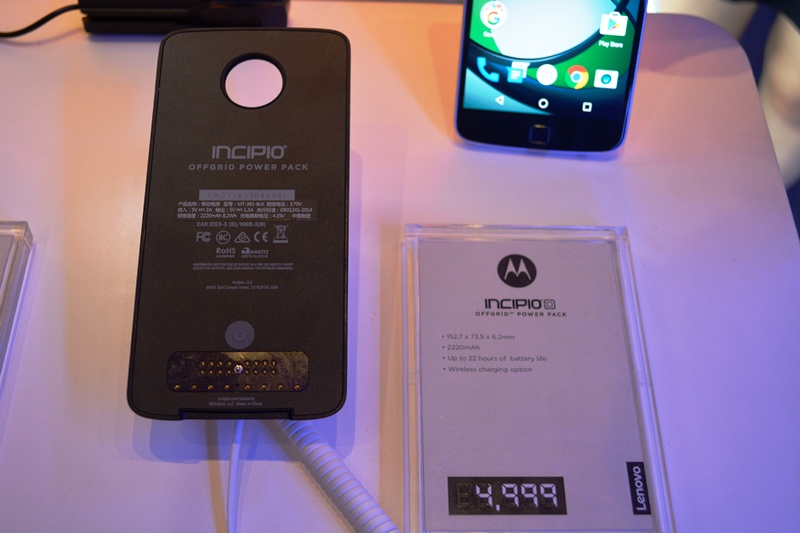 Other Moto Mods that were introduced include the 2220mAh Incipio offGRID Power Pack (PhP 4,999) which offers up to another day long of battery life and the Style Shells (PhP 699) for personalization. 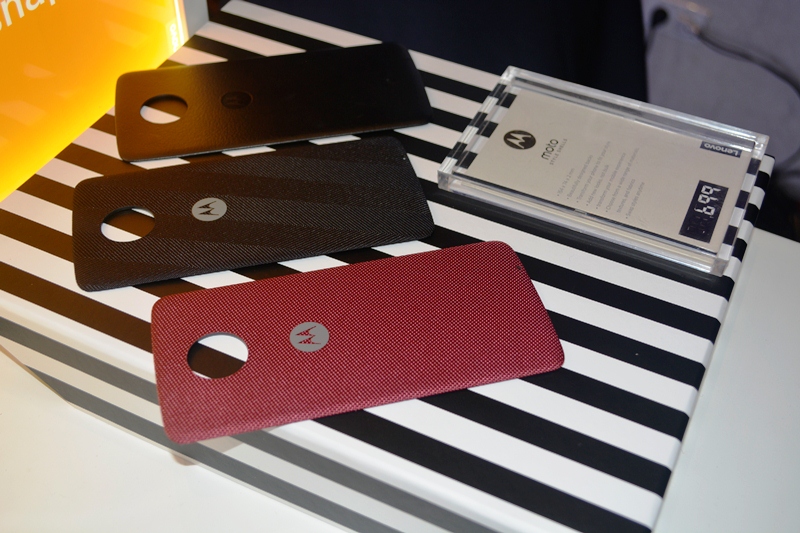 Lenovo is also introducing the midrange and entry-level smartphone lineups for Moto, namely the Moto G and the Moto E, consisting of models Moto G4 Plus (PhP 13,999), Moto G4 Play, Moto G4 Turbo, and the Moto E Power (PhP 6,999), some of which will be offered through Smart and Globe. 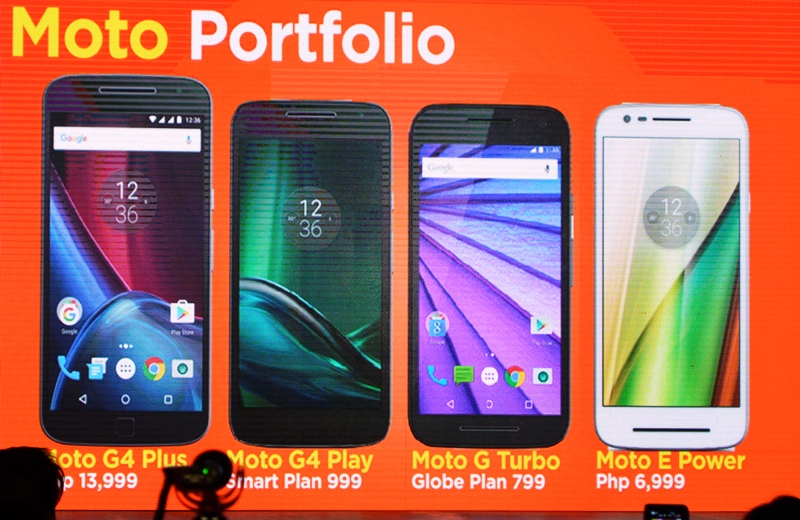 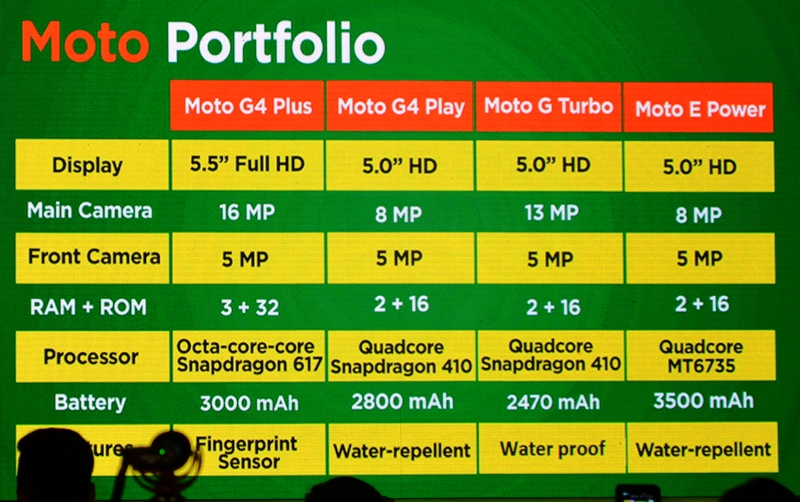 Motorola has been known for its groundbreaking innovation and Lenovo is continuing its tradition of excellence under the brand Moto with smartphones and devices that add "fun" to functional, are meaningful, and let you experience more in a snap. Stay tuned for a review of any of these devices soon!