Some information on this page were first published in our earlier preview article.

You may have read about it online, but apparently, the UD7 has been spotted for sale in retail shops in Taiwan. It's the same model that we'll be looking at here today, though we do have a few more shots than just the box. However, the packaging is indeed attractive enough to deserve its own shot, what with its profusion of logos and marketing slogans: 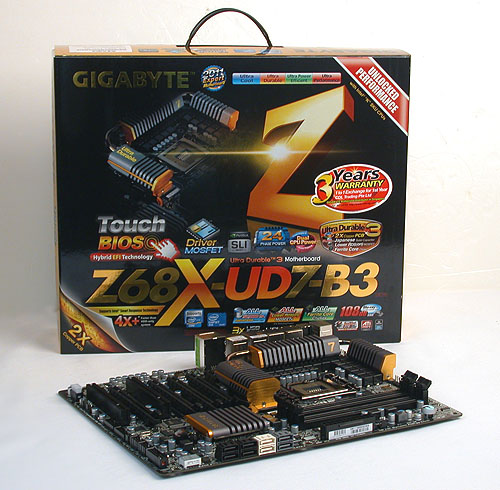 When we examined the physical Z68 board, we were slightly taken aback at how familiar it seemed. We weren't wrong, as a closer look, along with a check with our older P67 article showed that the new Gigabyte Z68 board was an identical twin to its P67 UD7 model. On hindsight, it's only logical that Gigabyte would replicate its P67 design with a Z68 chipset; the ASUS P8Z68V-PRO was also quite similar to its P67 boards.

There was nevertheless a major difference between this Gigabyte and the ASUS board - the GA-Z68X-UD7-B3 had no integrated display outputs at the rear panel like the ASUS. This makes this Z68 board even more like a clone of Gigabyte's P67 offering, as it offers only a discrete graphics option.

It also begs the question why Gigabyte went with a solely discrete option that appears to undermine the whole point of having a versatile chipset like the Z68 Express. From what we understand from Gigabyte, the manufacturer feels that the UD7 is a high-end SKU where the users are almost certainly going to have a discrete graphics card (or two), especially given the presence of an NF200 controller to allow for up to 3-way SLI/CrossFireX.

As for the other benefits of having the integrated graphics present, like Intel Quick Sync and Lucid's Virtu technologies, Gigabyte responded that Intel's Quick Sync was supported by a limited number of software currently for transcoding and it's not that essential for the target audience of the UD7.

The same too applies for Virtu, which while allowing dynamic switching between the integrated and discrete graphics, incurs a slight performance penalty (Gigabyte quotes between 1 to 3%) in the process. This is something that would not fly with users who have chosen to splurge on a high-end motherboard like the UD7. Those who wish to get the best of both worlds and enjoy the full advantages of the Z68 Express chipset, can look forward to Gigabyte's other, lower-end models, which will have Virtu and integrated display outputs for the Sandy Bridge processor.

It's a reasonable explanation for the design choices seen on the UD7, even if it does make this Z68 board practically indistinguishable from its P67 cousins, except for the chipset's support for Intel Smart Response. We would also have preferred that Gigabyte had allowed users to make the choice, rather than to make it for them. 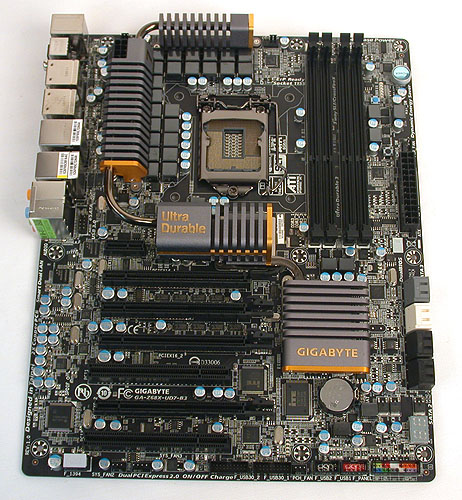 Outwardly, this Z68 board looks identical to its P67 UD7 cousin, from the hefty, eight layer PCB enhanced with Gigabyte's Ultra Durable technology (this just means more copper content in the PCB), to the matte black color scheme with gold trimmings. It's a handsome board and it comes with many features you'll associate with the high-end segment. From extra SATA 6Gbps ports to FireWire and dual Gigabit LAN ports, they are all here. There are also a generous number of USB 3.0 ports and of course, support for 2-way/3-way SLI and CrossFireX due to the NF200 controller. 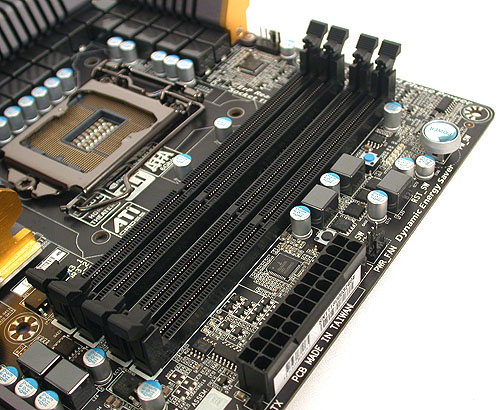 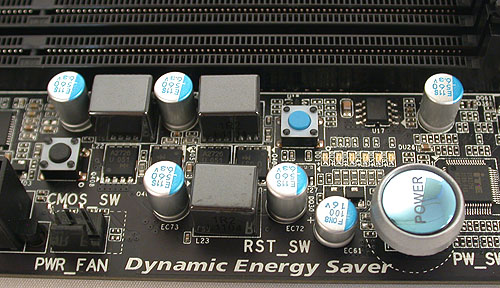 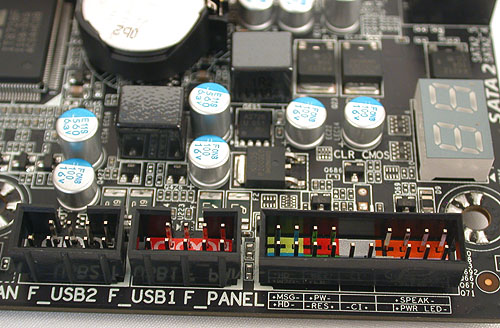 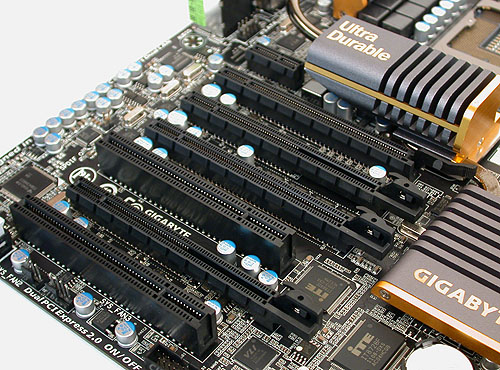 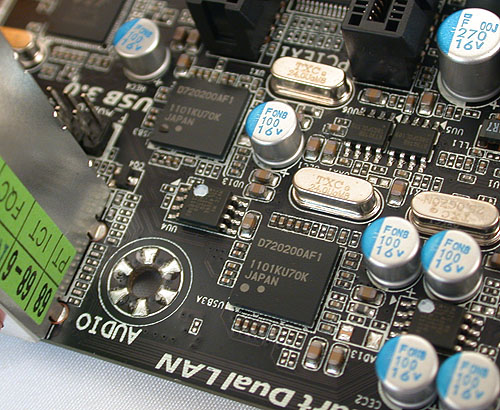 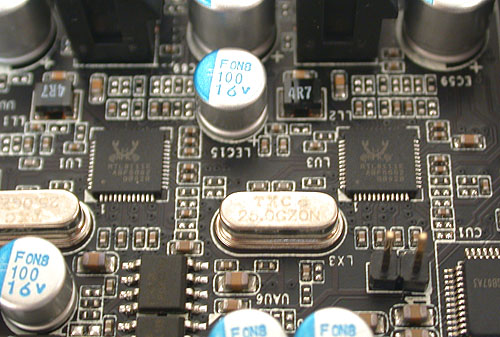 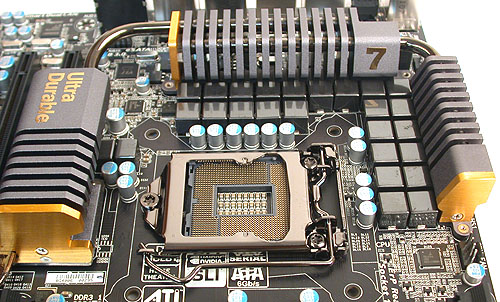 In short, we are repeating what we had said in our Gigabyte GA-P67A-UD7 review, including Gigabyte's Hybrid EFI BIOS, which looks exactly like an old-school non-EFI BIOS, but nevertheless supports the 3TB disks that users are concerned about. However, Gigabyte has now included a new BIOS utility that while not exactly what we were expecting, helps to alleviate the impression that Gigabyte is not following the graphical user interface trend.

This is none other than the new TouchBIOS, a Windows utility that brings a 'modern', graphical user interface to the BIOS. Available for download for Gigabyte's latest  Z68 based motherboards, users also have to update the BIOS on their boards first before installing. What you get after that is a rather colorful skin to the usual Gigabyte BIOS. And, it works with a touch-based display, so with the right monitor, you can navigating it completely using your fingers instead of a mouse. Of course, for most users, they will be using the mouse and keyboard.

The skeptics will say that this TouchBIOS is Gigabyte's response to criticism that its Hybrid EFI BIOS is not competitive with the EFI BIOS implementations from other manufacturers. It's no doubt a different tack from the other vendors, but we see no wrong with having a tool that allows you to tweak your settings within Windows, though the touch interface is perhaps a bit too gimmicky given the lack of touch interfaces for the desktop. 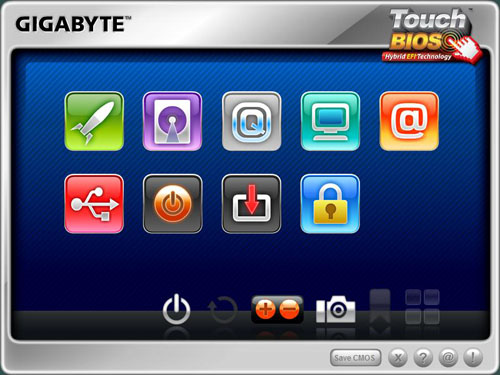 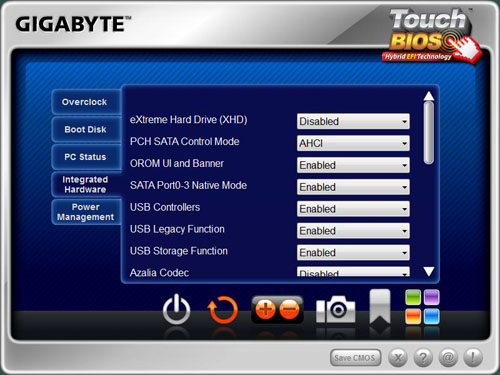