MSI at Computex 2017: All about gaming

MSI at Computex 2017: All about gaming MSI had one of the largest exhibition areas at the Nangang Hall of Computex 2017, so it was difficult for us not to notice it, apart from the fact that their products have been regular subjects of our news and reviews. In its entirety, gaming is the key theme of MSI's booth, which is consistent with one of the main focal points of Computex this year. Beginning with the motherboard segment, Intel X299 is a big deal for MSI as well. MSI's hero product comes in the form of the X299 Gaming Pro Carbon AC. Just as lengthy as its name, the board has a long list of features and specs that includes eight DIMM slots for quad-channel DDR4 support, four PCIe x16 slots that support either 3-way AMD CrossFireX or 3-way NVIDIA SLI, M.2, U.2, and up to eight SATA 6Gbps connectors for storage. For aesthetic enhancements, the board is bundled with swappable covers and X-mounting accessories as well as MSI's very own Mystic Light feature which allows users to organize and synchronize the color, activity, and frequency of the RGB LEDs on the board and the connected peripherals to it. 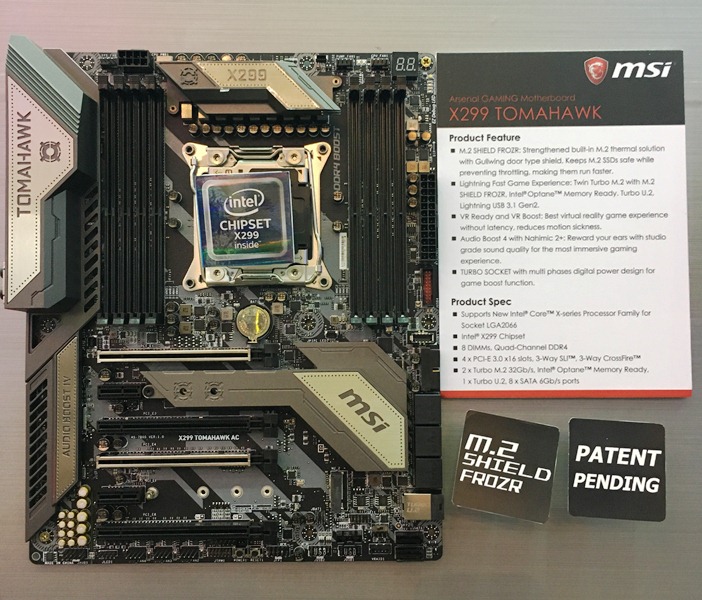 Classified as an enthusiast gaming motherboard, the X299 Gaming M7 ACK comes with Killer DoubleShot PRO feature for enhanced network performance (either via Ethernet or Wi-Fi) and M.2 Shield FROZR thermal solution with gull-wing door for M.2 SSD cooling and throttling prevention for faster performance. M.2 Shield FROZR is also present on the X299 XPOWER Gaming AC and the X299 Tomahawk motherboards. All MSI X299 boards, including the X299 SLI Plus, are Intel Optane-ready and equipped with Audio Boost 4 with isolated audio processors for better sound. 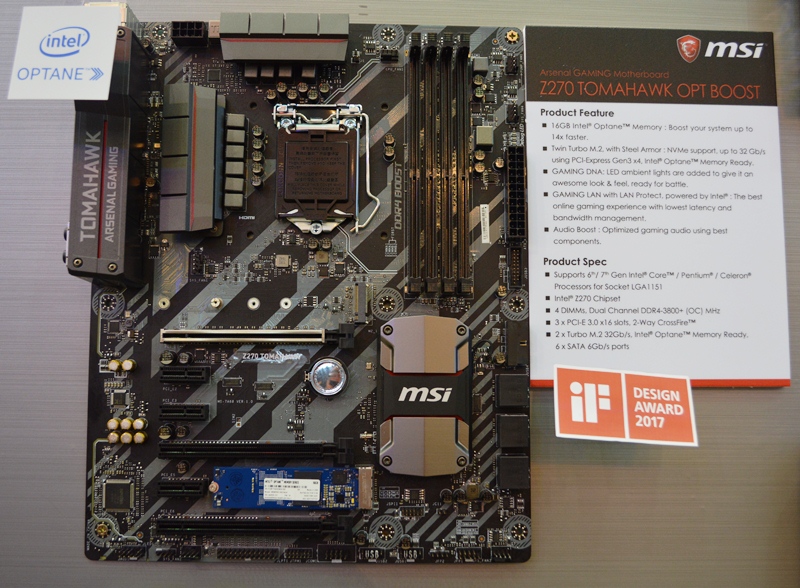 Complementing the motherboards, MSI also introduced new graphics cards at Computex 2017. MSI has a new flagship graphics card and it is called the GeForce GTX 1080 Ti Lightning Z. It follows the age-old recipe of taking NVIDIA’s flagship GPU chip and then mixing it with loads of high-end components and then topping it off with a large cooler. 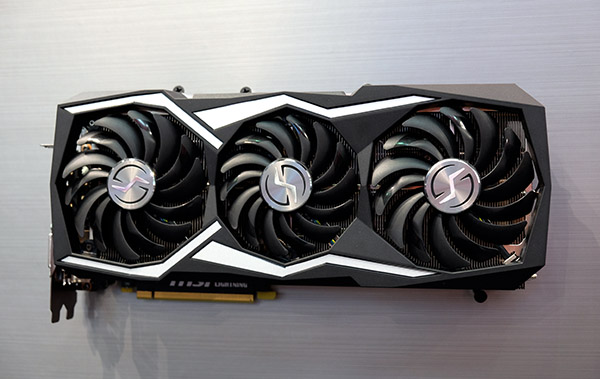 It features NVIDIA’s GeForce GTX 1080 Ti GPU and 11GB of GDDR5X memory. There are three operating modes: Silent, Gaming, and Lightning. Clockspeeds and memory speeds for the three modes are as follow:

Video output connectivity comes in the form of two DisplayPort 1.4 ports, two HDMI 2.0 ports, and a single dual-link DVI. It also has a customizable base plate with RGB lighting that can be configured to display over 16 million different colors. 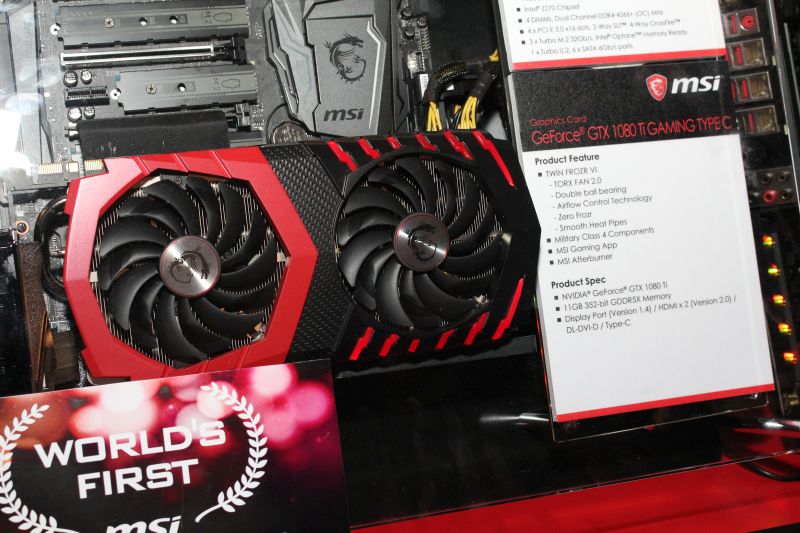 We also managed to get a brief look at MSI’s GeForce GTX 1080 Ti Gaming Type-C desktop graphics card, the first desktop GPU to carry support for the USB Type-C port. To date, most cards still use the full-size DisplayPort in order to drive display outputs at 4K and above, but given that the rights for the Type-C port with Thunderbolt 3 support will be royalty-free soon, it’s possible that MSI is hoping to jump on to this bandwagon early and gain momentum well before its competitors do. 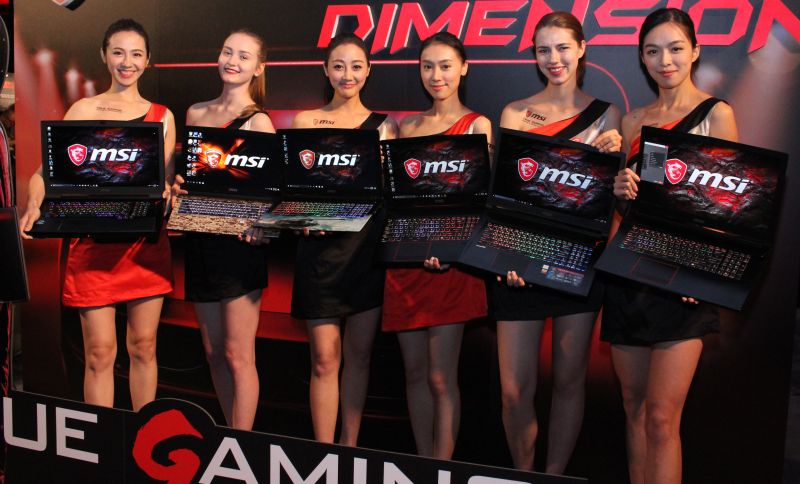 The two devices, the GT75VR Titan and the GE73VR Raider, are both designed to cater to specific consumer groups with different gaming needs. That being said, it should be pointed out that MSI’s Cooler Boost 5 technology can also be found within the GE73VR Raider as well. 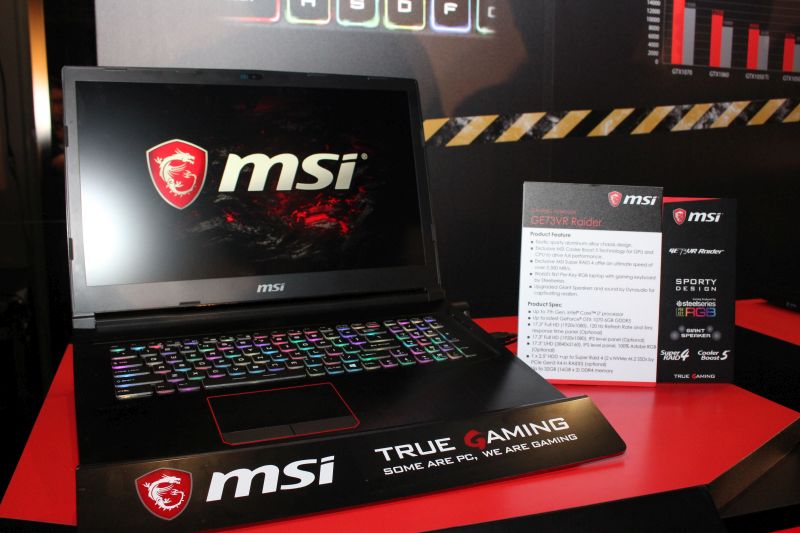 Moving forward, the GE73VR Raider is yet another option added into MSI’s popular GE gaming notebook series. Available with display sizes of either 15-inch or 17-inch, the GE73VR Raider installed with an NVIDIA GeForce GTX 1070 GPU. But what makes this notebook stand out from its competition is that its display has a response time of just 3ms and a refresh rate of 120Hz.

In terms of universal features, both the notebooks will come with a brand new RGB mechanical keyboard made in partnership between MSI and Steel Series, and both notebooks will be capable of supporting the Hi-Res audio standard. In the notebook department, MSI revealed the new GS63 based on NVIDIA's Max-Q design proposition. Following this design ethos, the GS63 achieved the feat of squeezing in a high-performance GeForce GTX 1070 GPU within an 18mm-thin chassis that weighs less than 2kg (1.79kg). The GS63 also comes in two display variants according to screen resolution: 1920 x 1080 and 3840 x 2160. Other Max-Q laptops that were present during Computex include the Acer Predator Triton 700, ASUS ROG Zephyrus, and the Gigabyte AORUS X5 MD.

Gaming consoles used to one have key advantage over their PC gaming counterparts: they are a lot sleeker and pleasant on the eyes. PC gaming systems are usually bulky and not very sexy-looking. However, a new breed of ultra-slim gaming desktops are changing that perception and the latest one is the Vortex G25 from MSI. 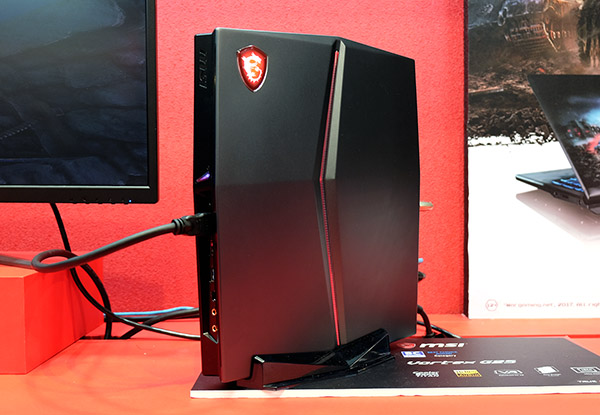 The MSI Vortex G25 displaces just 2.5 liters and is therefore fantastically slim. It will give the new PlayStation 4 Slim a run for its money. It’s designed like a console too, with the most frequently used ports, like the USB Type-C and USB ports, conveniently positioned on the front. The Vortex G25 was designed with VR use in mind, and so the front panel has a convenient power jack that can be used to power VR headsets. 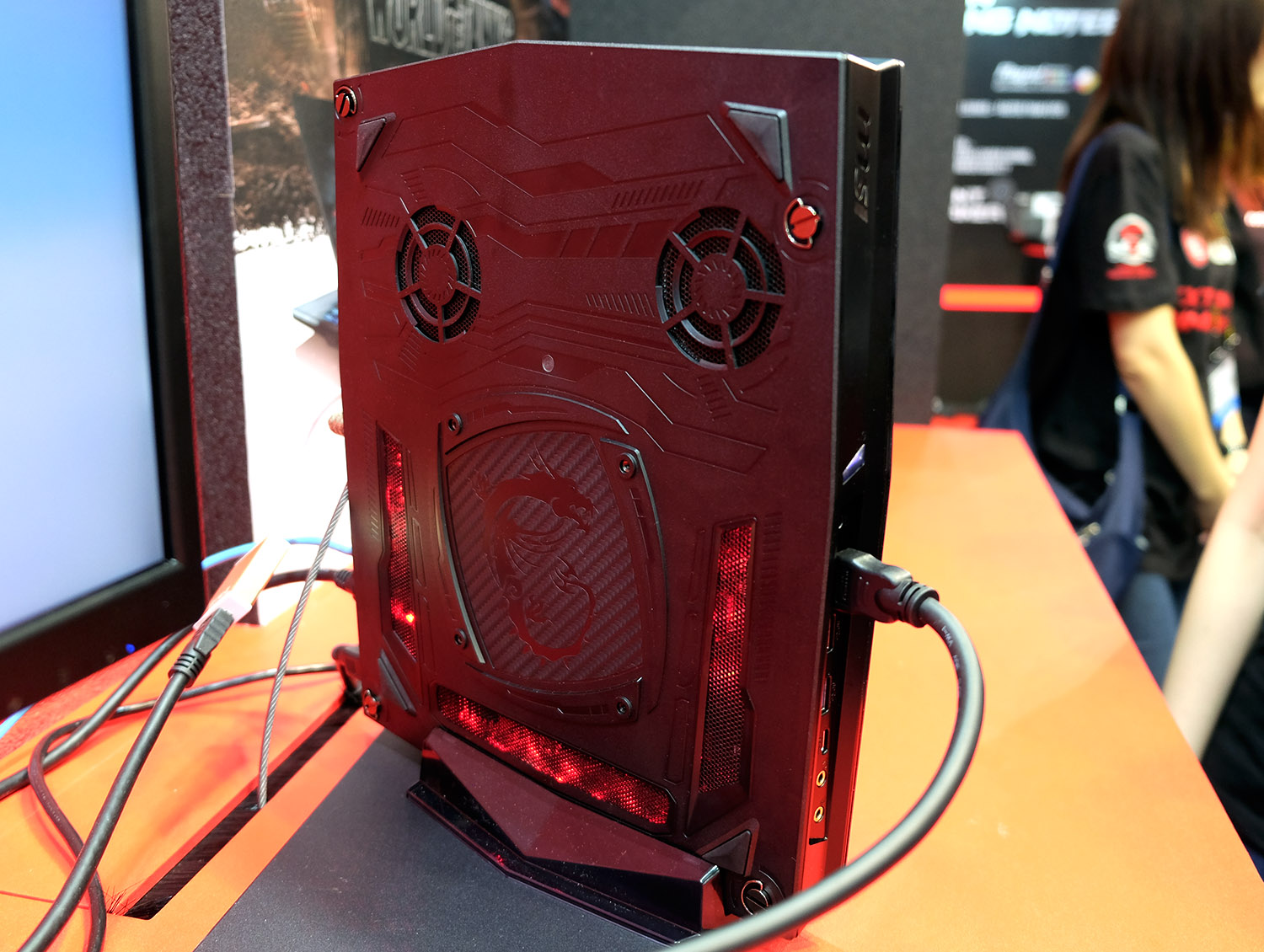 Inside, the Vortex G25 can be spec’ed with up to a seventh generation Intel Core i7 processor and up to an NVIDIA GeForce GTX 1070 with 8GB of GDDR5 memory. It can also be equipped with up to 64GB of DDR4 memory. Clearly, this is one of crazy powerful gaming machine.

The bottom panel can also be easily removed for users to upgrade the memory and storage on their own.