MSI Z97 Motherboard Showcase - The Heat is On in Saigon

MSI Z97 Motherboard Showcase - The Heat is On in Saigon

In spite of widespread reports regarding the declining and slow growth of the worldwide PC market, MSI executives at the recent MSI Media Tour announced that the company recorded good sales record last year. Supporting the premise, Intel, one of MSI's key partner put emphasis on its good relationship with the Taiwanese company and explained that the PC industry remains healthy. Because of PCs unique appeal to consumers, high-end Intel Core processors and NVIDIA graphics cards remain popular among gamers and PC enthusiasts. Intensifying its presence in the PC arena, MSI showcased in front of delegates from Southeast Asia, India, and the United Arab Emirates its latest array of motherboards based on the latest Intel Z97 chipset. The MSI Media Tour was held in Saigon, Vietnam. 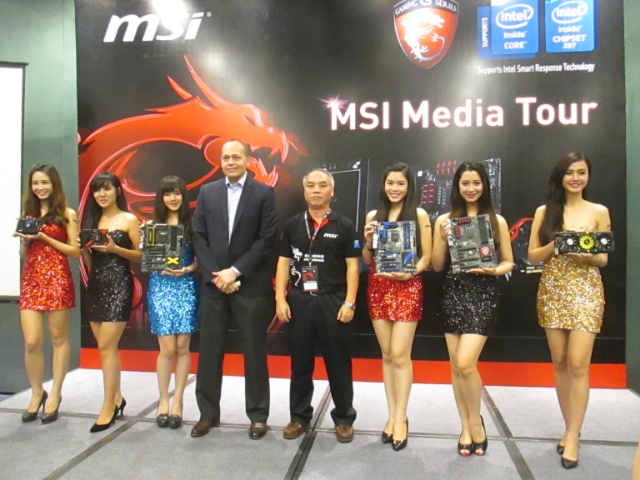 MSI's Z97-based motherboards are divided into three key categories: OC, Gaming, and Classic. With Intel's Z97 chipset, MSI's new motherboard models come with LGA1150 CPU socket and are designed to support fourth and fifth generation Core, Pentium, and Celeron processors from Intel, including Haswell Refresh which will launch in June 2. All of these come with RAM slots that can support up to 32GB DDR3 at 3200MHz (overclocked). 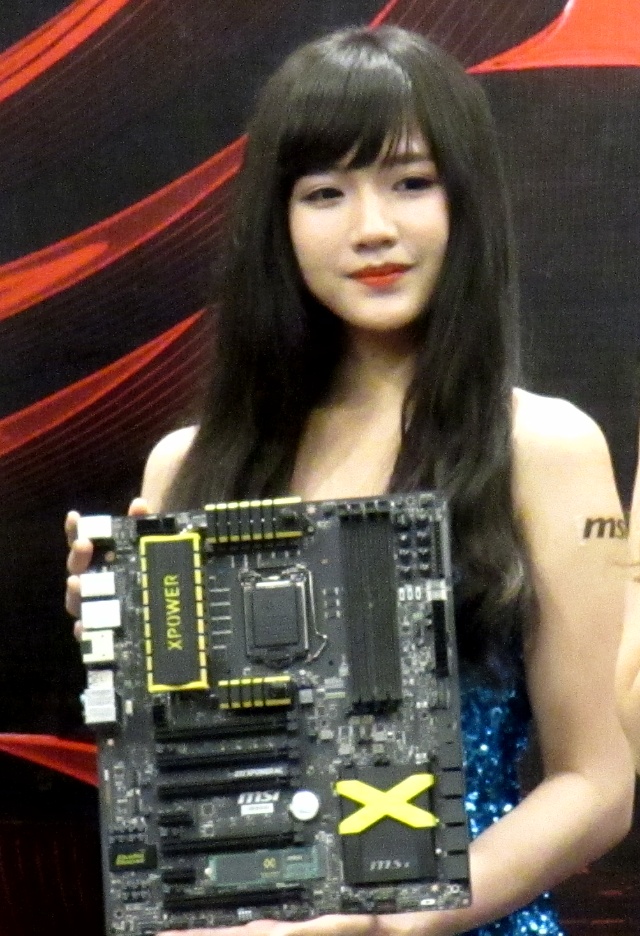 Notable for the black and yellow color scheme, MSI's OC series motherboards are targeted towards overclockers and power users. For very advanced users, some models even support liquid cooling with a specialized heatsink assembly. 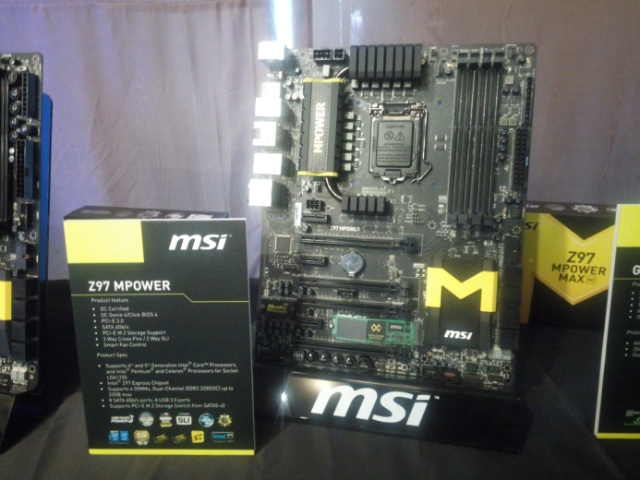 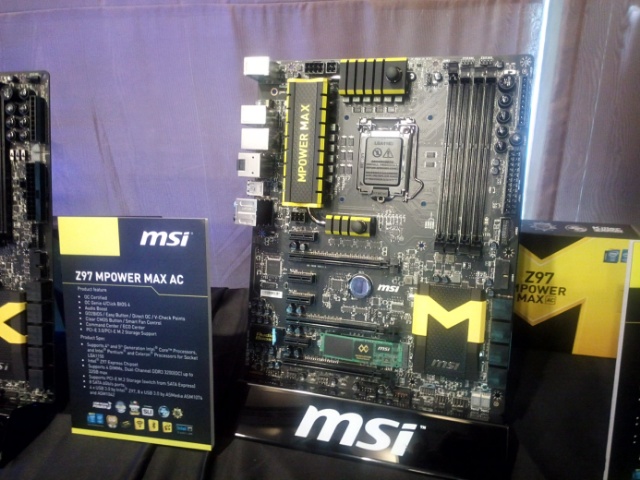 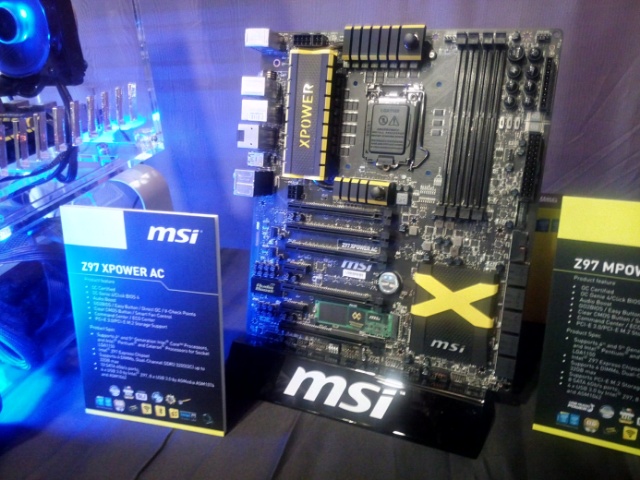 This board offers PC enthusiasts a lot of features like onboard liquid cooling support, five full PCIe expansion slots, four DIMM slots, and onboard switches for on-the-fly tweaking. The board comes with ten SATA 6Gbps connectors, four USB 3.0 ports linked to the Z97 chipset, and eight USB 3.0 terminals linked to ASMedia ASM1074 and ASM1042 chips. 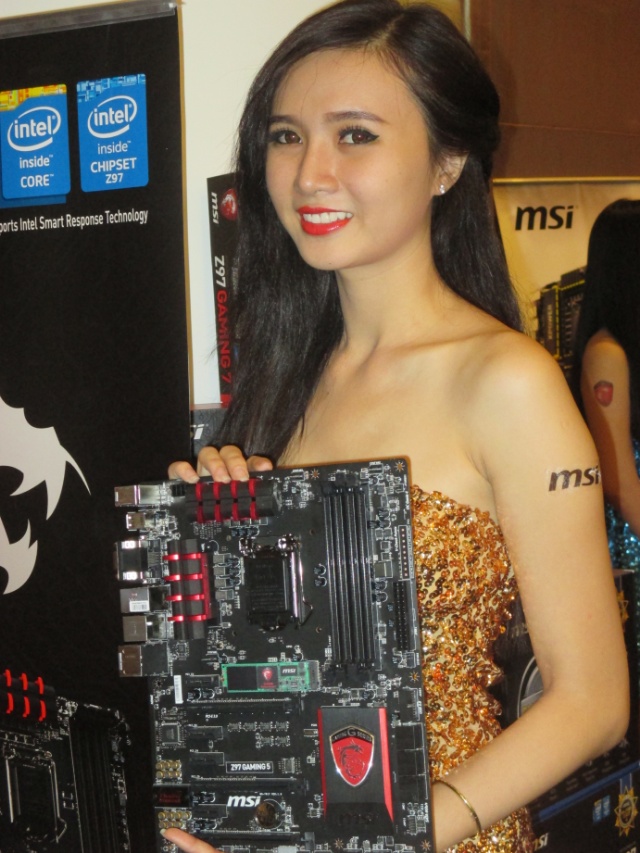 Targeted towards gamers, the Gaming series consists of Z97-based motherboards that flaunt a black and red color scheme. 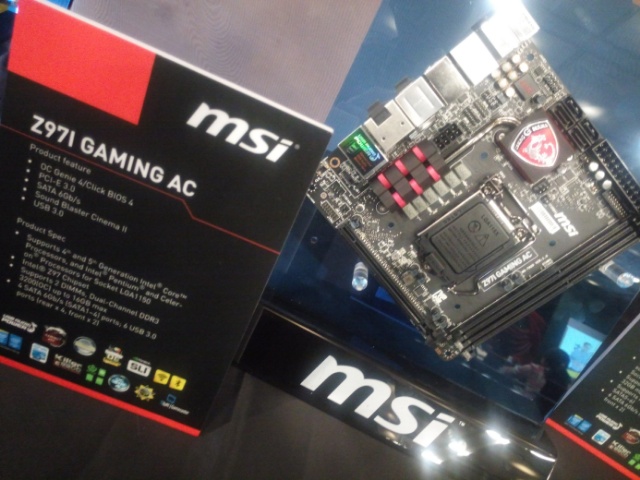 Starting off with the smallest member of the series, this mini-ITX board comes with two DIMM slots with up to 16GB DDR3 support at 3200MHz clock, four SATA 6Gbps connectors and six USB 3.0 terminals. It can also accommodate a graphics card with its sole PCIe slot. 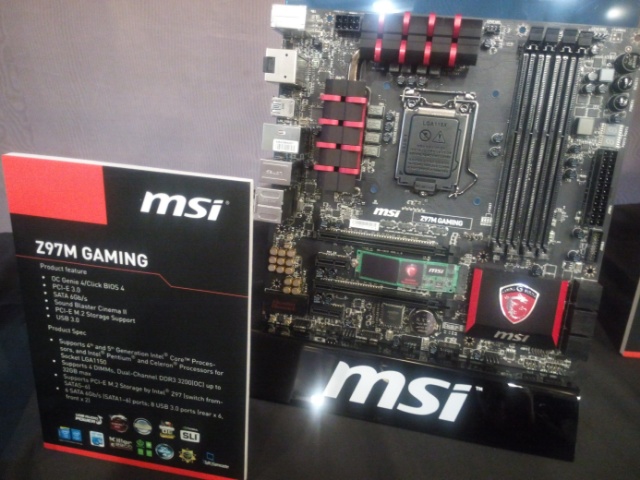 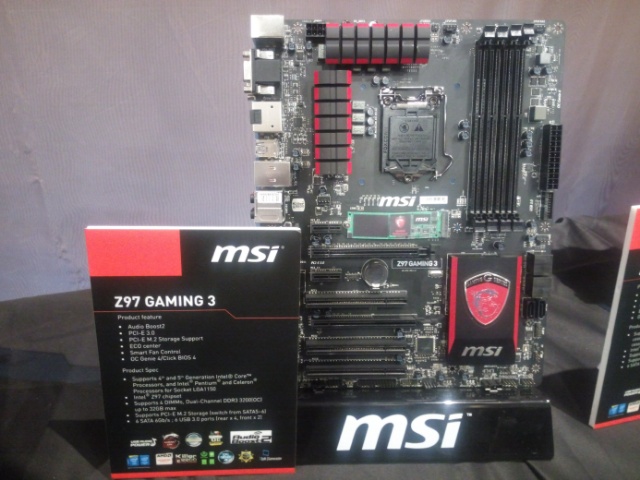 The board is positioned towards budget-minded gamers. It has a simple heatsink-based cooler, two full-size PCIe slots, three PCI slots, and four DIMM slots. Additional connectivity features include six SATA6Gbps connectors and six USB3.0 ports. It does not have onboard switches, but it retains the E2200 Killer LAN. 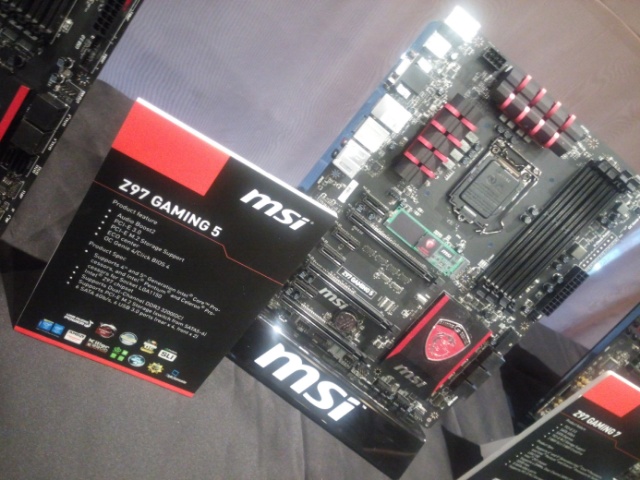 The Gaming 5 has three full-size PCIe slots and four PCIe x1 slots for expansion. On the connectivity front, it has six SATA 6Gbps connectors, six USB 3.0 ports, simple heatsinkbased cooler, and four DIMM slots. No onboard switches are present. 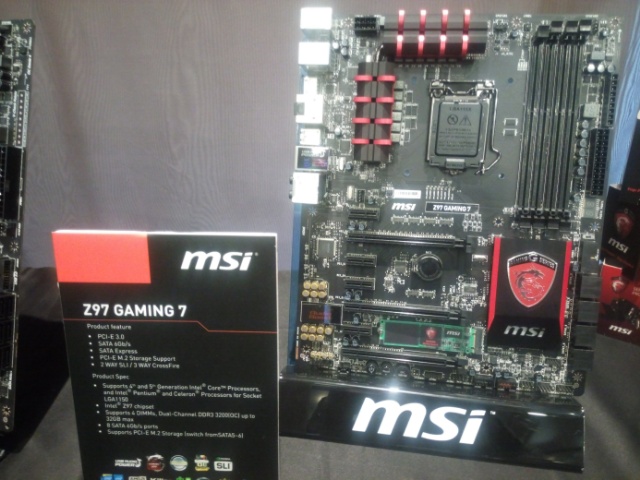 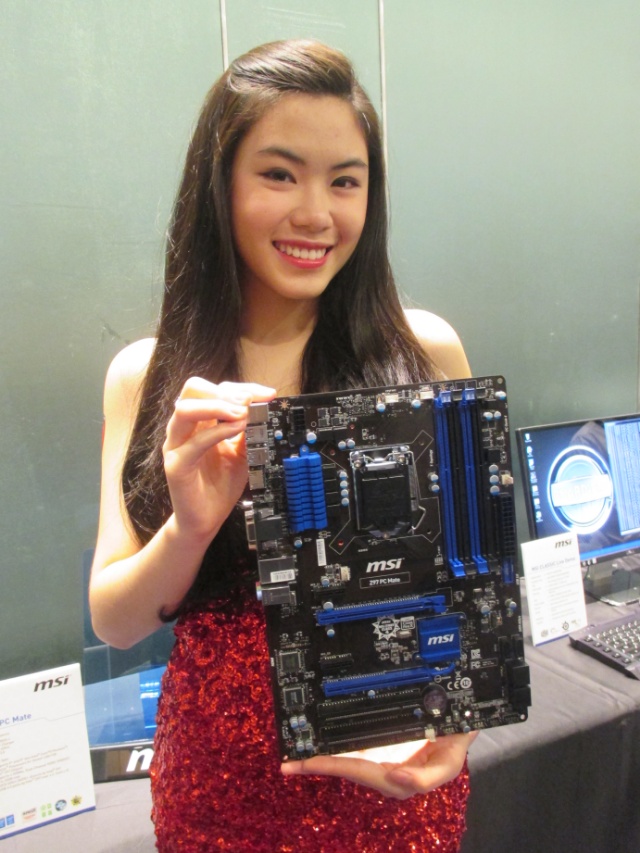 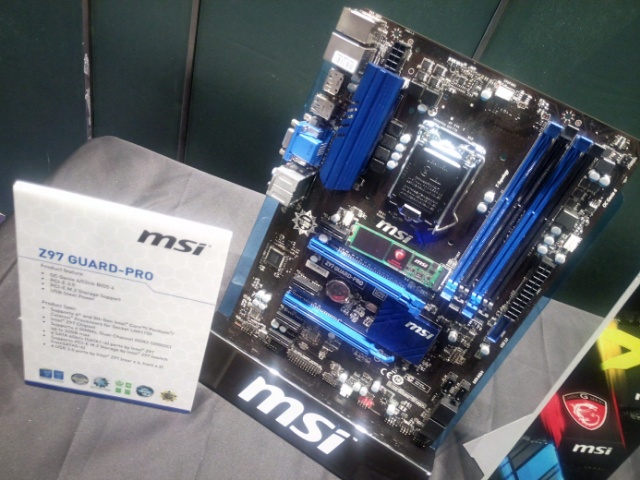 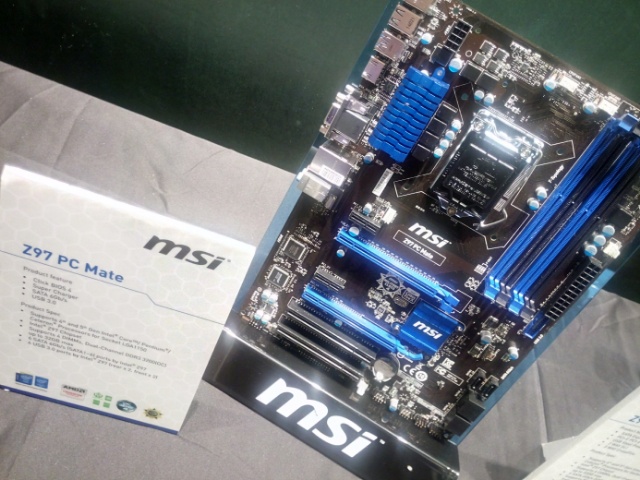 The board is seemingly the simplest model in the Classic series as it only comes with one CPU heatsink. It comes with two full-size PCIe slots, two PCIe x1 slots, and two legacy PCI slots. The chipset is cooled by a small heatsink. The board hosts six SATA 6Gbps and four USB 3.0 connectors, all of which are linked to the Z97 chipset. The board does not support PCIe M.2 feature. 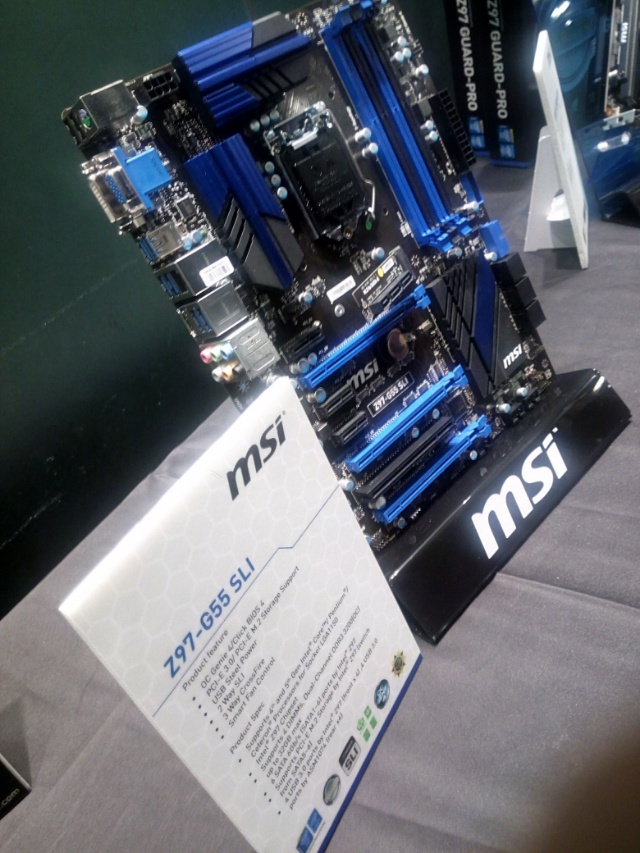 As its moniker suggests, the board comes with three full-size PCIe slots that support SLI multi-GPU configuration. It also has two PCIe x1 slots and one legacy PCI slot. On the connectivity front, the board has four USB 3.0 connectors linked to the Z97 chipset and four USB 3.0 ports linked to an ASM1074 chip. 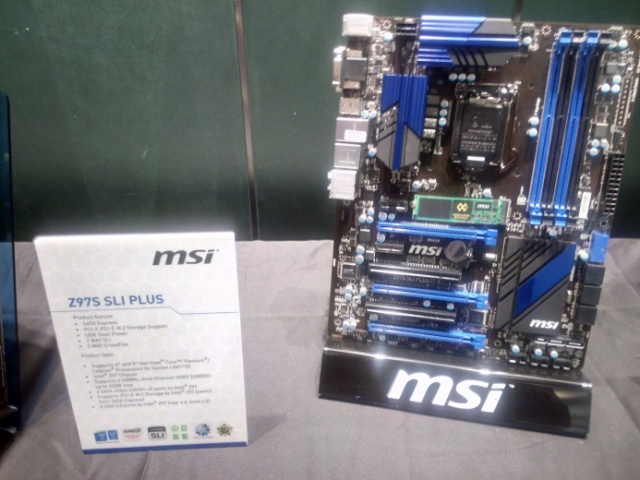 Seemingly more featured than the Z97-G55 SLI, this board has three full-size PCIe slots, two PCIe x1 slots, and two legacy PCI slots. For storage, the board hosts six SATA 6Gbps connectors and six USB 3.0 ports, all linked to the Intel Z97 chipset.