In SLI setup, the NVIDIA GeForce GTX 680 cards' GPU each run about 2 degrees Celsius higher than when operating as a single card. This temperature difference was also observed with the pair of Tahiti XT GPUs, but the difference was reversed. The differences are pretty much attributable to the loading of the GPUs. 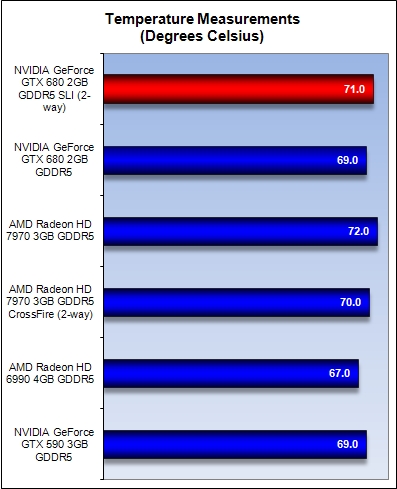 As expected, the dual GeForce GTX 680 graphics cards managed lower power consumption at peak power draw than the Radeon HD 7970 pair. On the other end of the scale, AMD's ZeroCore technology was well at work and ensured that the idle power of the system was kept in check despite adding a second graphics card. 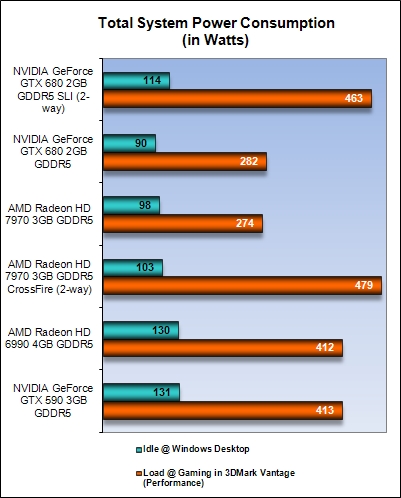 For our overclocking efforts, we made use of EVGA's PrecisonX utility software and applied settings that we've last tested to overclock well with the NVIDIA reference cards. GPU Offset Clock was set to a value of 130MHz, while the memory subsystem was set with a headroom value of 300MHz. For these settings, we left the voltage of the card at its default value of 0.987mV and left the Power Target at 100%. 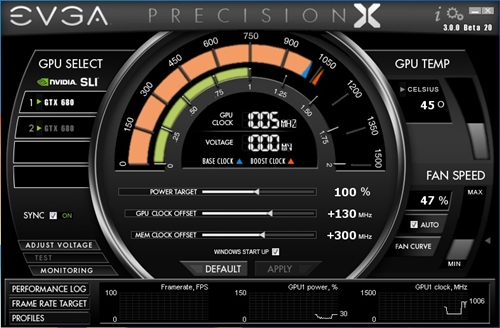 The overclocked pair of NVIDIA GeForce GTX 680 managed to set gains of about 8% over its unclocked state at Extreme settings of the 3DMark 11 benchmark. At the Performance settings, the margin was halved, to percentage value of slightly over 4%. The AMD Radeon HD 7970 CrossFire pair in its overclocked state made better progress gaining over 13% and 11% in the respective test settings.

Even so, the sad part is that the overclocked AMD pair was unable to outdo the non-overclocked GeForce GTX 680 pair. They got close with a 1% performance difference, but that's the best they could muster. We managed to overclock the core clock of the AMD Radeon HD 7970 cards to 1090MHz apiece (default is 925MHz) and we managed to push the clock speed of their memory subsystem to their maximum value of 1575MHz, for an effective memory clock speed of 6300MHz as compared to their default value of 5500MHz. When comparing both pairs of cards at their overclocked state, the NVIDIA pair maintained a lead close to 10% at the Extreme test preset and close to 5% at the Performance preset. 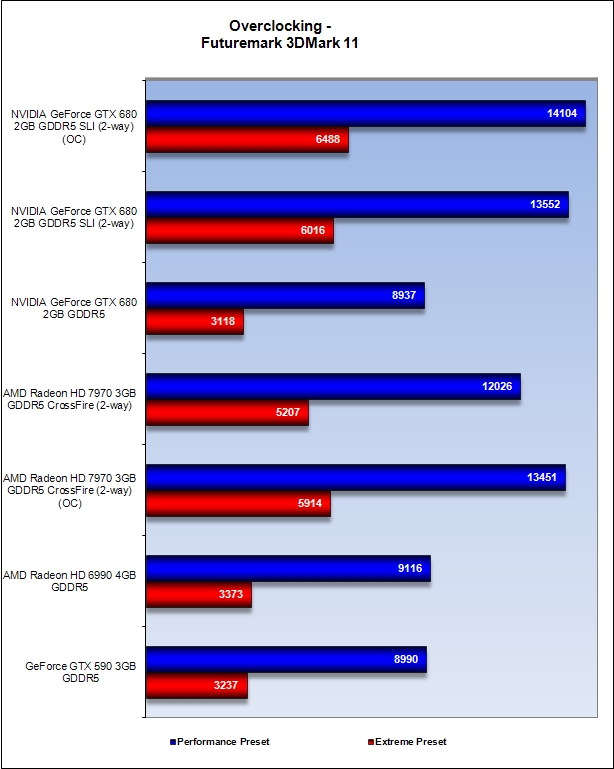 Following our scrutiny of the GeForce GTX 680 SLI's GPU Boost, the first Kepler GPU hit its maximum core clock speed of 1240MHz while the second hit its maximum at 1267MHz. This meant that we managed to increase the default boost clock of 1058MHz by almost 20% (at least for the second Kepler GPU). For GPU Boost, we saw an increase of 11.5% when the new base clock of 1136MHz (the sum 1006MHz + 130MHz) is taken into consideration.

In total, our 2-way GeForce GTX 680 SLI setup featured 3073 CUDA cores and the raw computing power showed in the performance benchmarks - some of the time. During our testing, significant performance scaling was only apparent at the highest tested resolution of 2560 x 1600 pixels. This only reinforces the point that only extreme gamers with demanding needs can appreciate spending a hefty amount for a multi-GPU setup.

Interestingly, over at the AMD camp, the Radeon HD 7970 2-way CrossFire tended to scale at both of our tested video resolutions of 1920 x 1200 and 2560 x 1600 pixels. The pair of Tahiti XT GPUs registered higher proportional gains in CrossFire against a single Tahiti XT GPU and we attribute this outcome to the lower overall performance of the single GPU. This allowed the AMD dual-GPU setup to seemingly scale better while the NVIDIA counterpart already registered higher single GPU performance than the competitor. This sort of indicates that our test rig needs to be pushed even further to get more out of the cards, but as it stands now, the overall raw performance of the dual Kepler GPUs generally garnered higher scores.

In terms of temperature, there was not much difference despite claims of NVIDIA's newly designed finstack heatsink cooler to drastically improve temperatures. However, the cooler still has its merits because while in 2-way SLI, the cards ran quiet even in their overclocked state - something that not many other graphics card pairs can boast about. Once you add up the value quotient for which the GeForce GTX 680 is a little more affordable than the Southern Island counterpart and its ease of setting up 3D gaming rigs, all of these aspects naturally puts NVIDIA in a more favorable light for your ultimate gaming rig - for now.