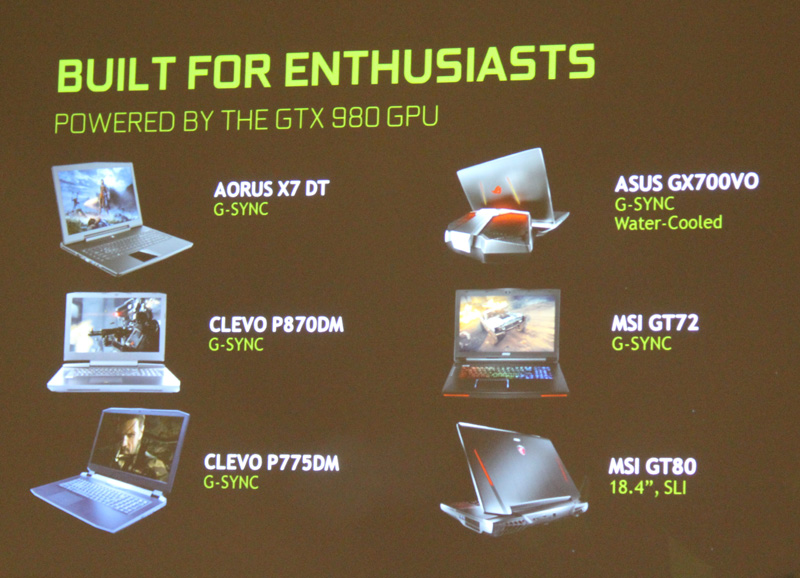 Right now, NVIDIA has revealed 6 different notebooks that will come with the NVIDIA GeForce GTX 980. It's interesting to note that only the 18.4-inch MSI GT80 is the only machine without a G-Sync display. In case you've forgotten, the MSI GT80 is hands-down the world's most overpowered gaming notebook. It's also the only gaming notebook in the world with a mechanical keyboard, which is also set to return when the new MSI GT80 makes its debut in the next few days or weeks.

Also, since all of the machines are either SLI or G-Sync compatible, none of them are running NVIDIA Optimus, which automatically switches to the CPU's integrated GPU when running on battery power and when non-gaming tasks are performed. Gaurav did say that while Optimus technology is compatible with the NVIDIA GeForce GTX 980 used in notebooks, it's not used in these machines because its incompatible with G-Sync and SLI machines.

There were three NVIDIA GeForce GTX 980 gaming notebooks on display at the event - they were the Aorus X7 DT, MSI GT72,and Clevo P870DM. The baseline system for comparison was the ASUS ROG G20AJ desktop gaming PC.

The Aorus X7 DT was powered by an Intel "Broadwell" Core i7-5700HQ processor and equipped with 16GB of system memory:- 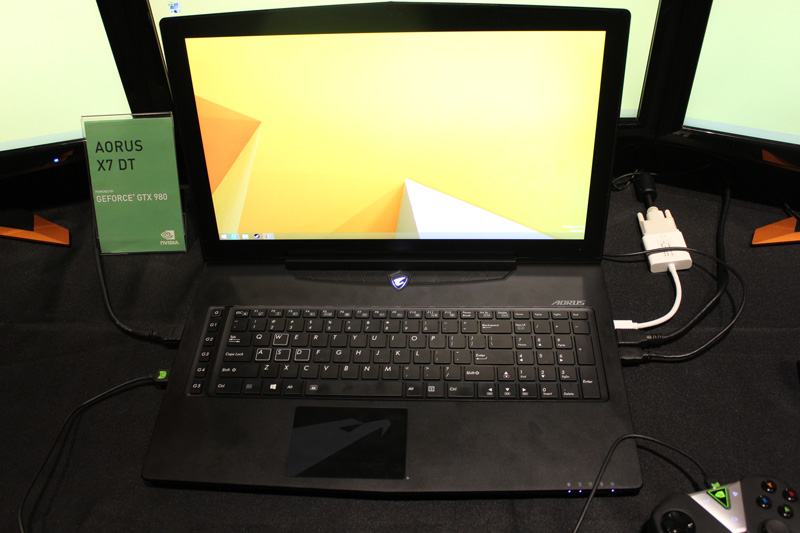 The MSI GT72 featured Intel Core i7-6820HK CPU, an overclock-able quad-core mobile Skylake processor with a base clock of 2.70GHz and a Turbo Boost clock speed of 3.70GHz. It was also decked out with 16GB of RAM. Looks familiar? 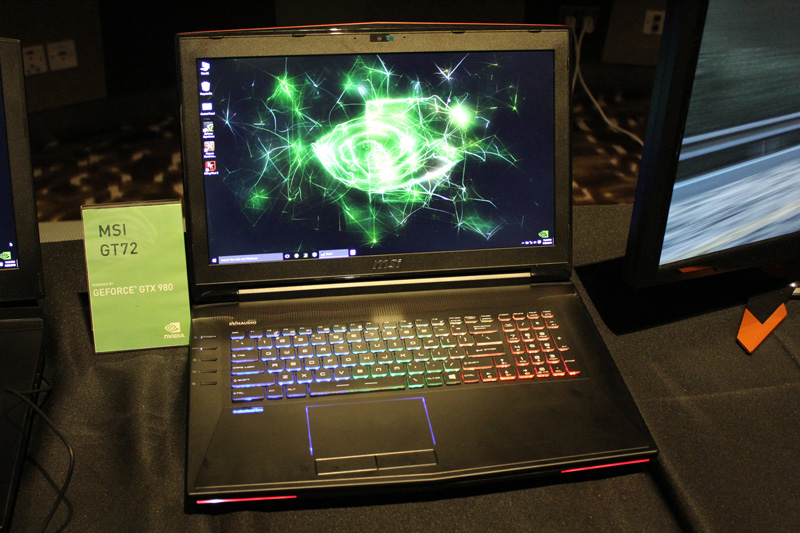 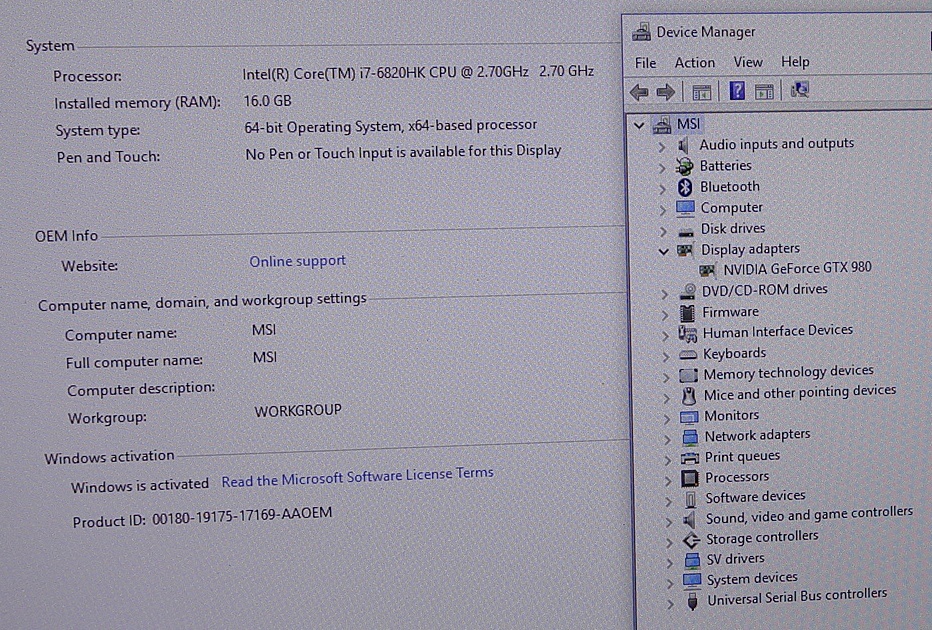 The last system on dislpay with the new GPU was the most powerful of all as the Clevo P87DM sports an unlocked desktop "Skylake" CPU, the Intel Core i7-6700K! Of course, like the rest of the notebooks, it too had an NVIDIA GeForce GTX 980 graphics module in it. 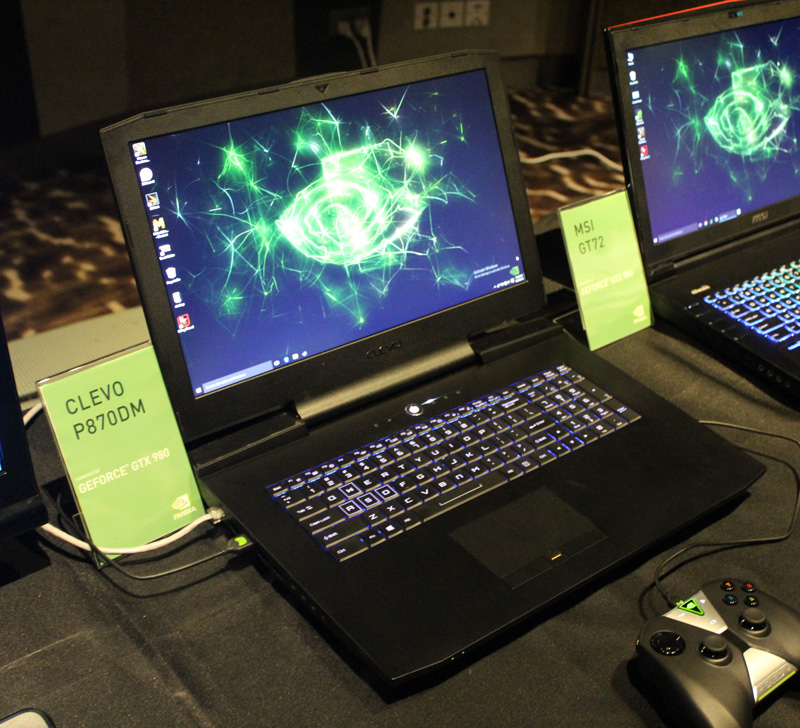 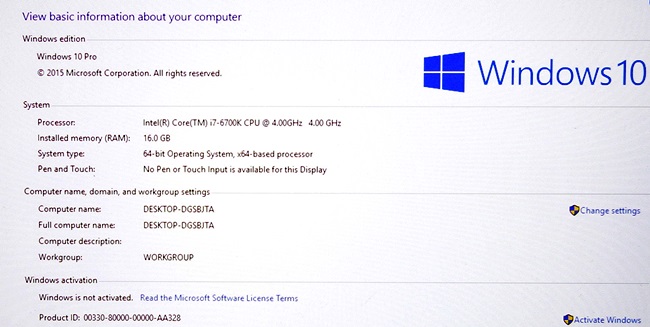 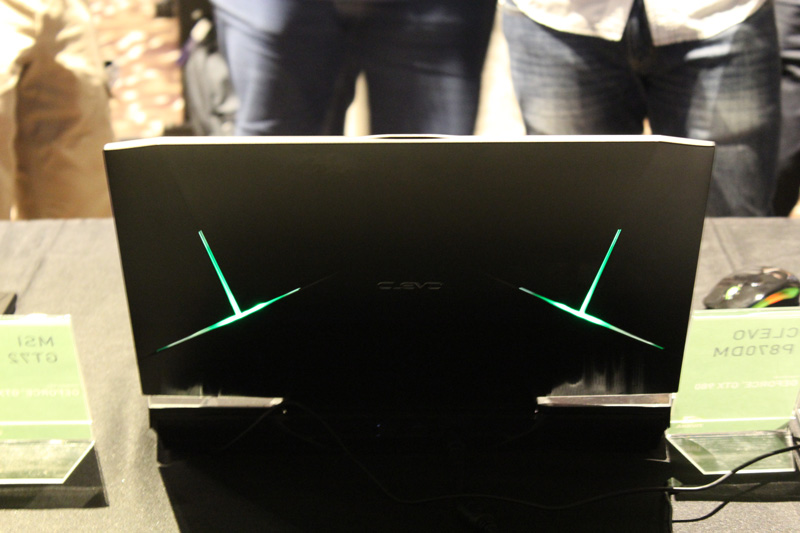 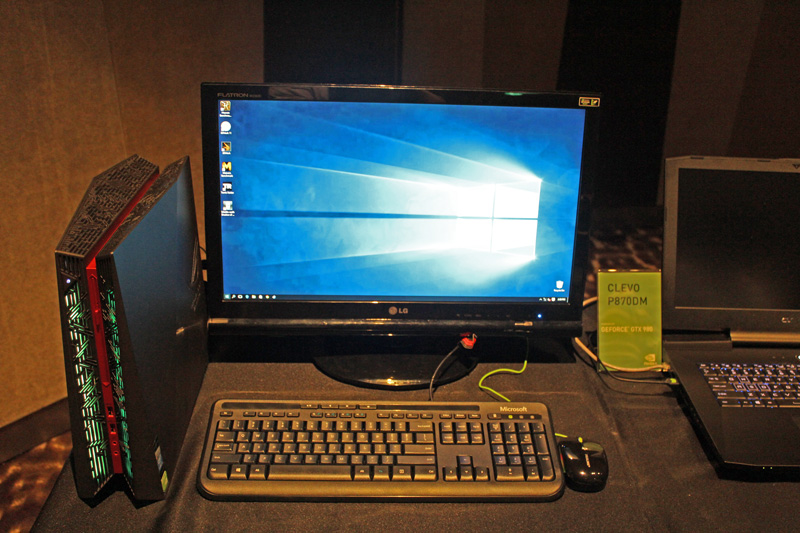 Game Demos with the GeForce GTX 980 in a notebook

During the 3DMark 2013 benchmark demonstration, the ASUS ROG G20AJ (located on the left) was pit against the Clevo P870DM (on the right). The score of the ROG desktop gaming system was 5887; while the Clevo had the score of 5898. Do bear in mind the Extreme test of the benchmark is usually reserved for systems with multi-GPU configurations or overclocked gaming rigs. The score of the Clevo was slightly higher due to its more high-end specifications, especially its GTX 980 graphics chipset and its updated Skylake desktop CPU. NVIDIA has made its point about experiencing desktop gaming, at high settings, with the notebook form factor.

In the next gaming benchmark Tomb Raider, the Clevo had an average FPS of 91.46 and the baseline desktop, 96.84fps. So this result is typical of the GTX 980-based gaming notebook as NVIDIA has emphasized the empirical results wouldn't be 100% on par with a desktop system; it's inclined to a percentile value of 95%.

This demonstration showcased the ability of the gaming notebook to drive three full HD monitors for an immersive gaming experience. As gamers know, Project Cars is a pretty demanding game, especially so at high settings. The Aorus X7 DT is running the game on its highest setting at 1080p and the frame-rate is still buttery smooth throughout.

We came to the event expecting NVIDIA to show off a new 'Titan M' class of cards and instead came away with the revelation that the company has finally succeeded in achieving parity between their mobile and desktop graphics cards. This begs the question on whether NVIDIA would stop here or whether it would actually take it one step further, introducing other NVIDIA GeForce GTX 900 series desktop cards to the mobile market.

We wonder too if market fragmentation will occur because of this. After all, most enthusiasts who play on notebooks gravitate to SLI systems or those with an NVIDIA GeForce GTX 980M. If there's a choice between that and a NVIDIA GeForce GTX 980, we reckon most of them will bite on the GTX 980, regardless of how much more it costs.