Taking The Galaxy S4 Zoom for a Spin

At the Samsung Premiere 2013 event in London today, we got a chance to take the recently announced Samsung Galaxy S4 Zoom for a ride. Although the new camera smartphone is pretty much ready in terms of build and hardware, the software features are still something that the company is constantly tweaking. So what we're showing you here today is based on the prototype product that they demonstrated at the event. 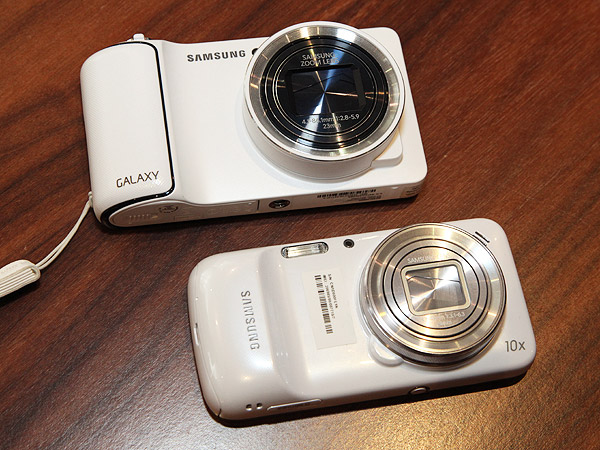 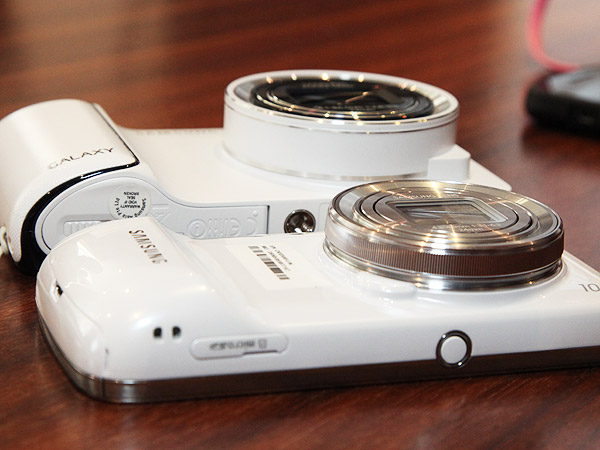 As shown in the images above, the S4 Zoom is slimmer and more pocketable than the earlier launched Galaxy Camera. We know it's not really a fair comparison here as the Galaxy Camera is really just a digital camera unlike the S4 Zoom which can be used to make phone calls at the same time. Since we didn't really have any other similar products to build a frame of reference, we thought we'd use the Galaxy Camera to give you an idea of the product's size.

Like what we said earlier about the S4 Zoom being a phone, Samsung actually designed it based on the S4 mini. So the size of the screen is similar to the S4 mini but with a 10x zoom camera slapped onto the back of the phone. It functions pretty much like a camera as well since it does have a dedicated shutter button, a zoom ring and various camera shooting modes. But what's unique with the device is that it lets you snap and send a picture via MMS while you're carrying out a conversation with a friend. So yes, you'll never miss a picture even when you're using the phone. 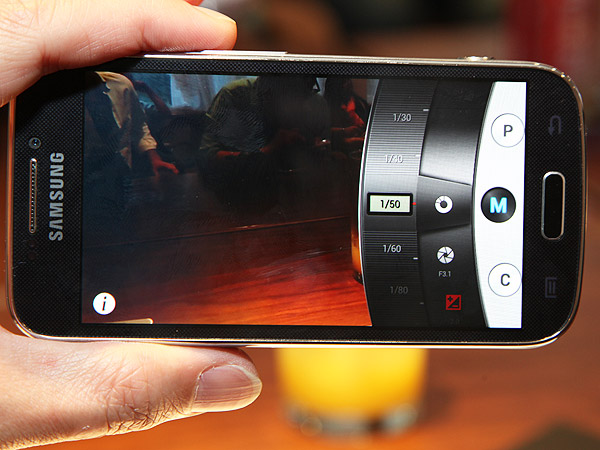 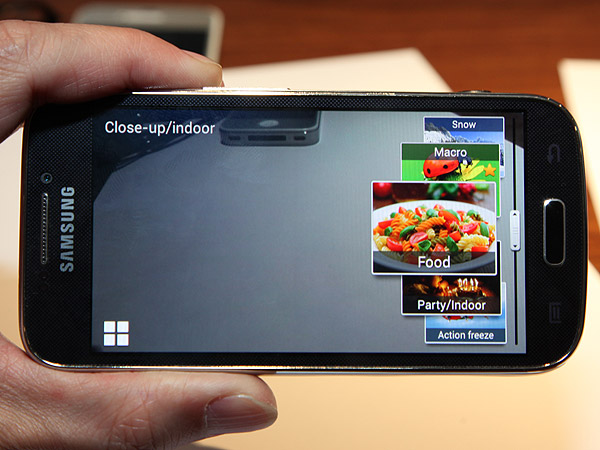 Similar to the Galaxy Camera and the recently announced Galaxy NX, the S4 Zoom also feature the Smart Mode presets that help beginners enhance their images. However, unlike the Galaxy NX, the S4 Zoom comes with only 25 presets, just 5 short of the 30 presets in the Galaxy NX. We're not entirely sure what was left out of the S4 Zoom, but there's still plenty of options to choose from. And if you're clueless, the Smart Mode feature could also offer the user suggestions. By pressing the top shutter halfway, Smart Mode will suggest 3 different presets based on the camera's analysis of the scene. 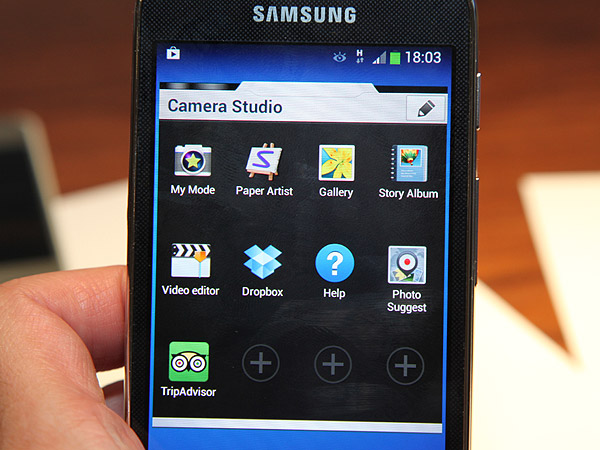 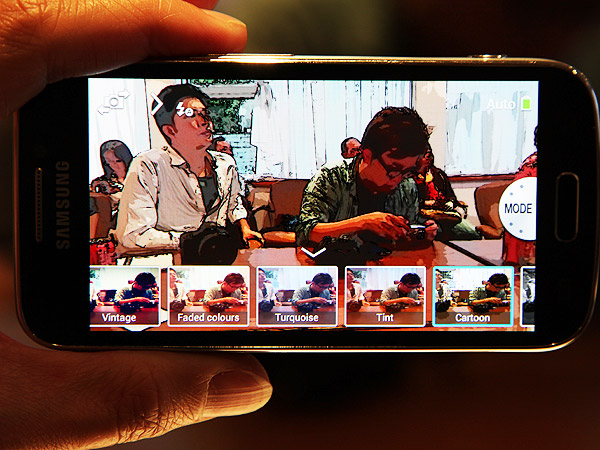 When you first pick up the camera, one would intuitively use the touch screen to manipulate the camera functions. While that makes it extremely easy for someone without any experience to learn how to use the camera, there are quite a lot of key strokes involved. So, Samsung added an intuitive feature into the S4 Zoom to help make it easier to access the camera features. Using the lens ring, the user can quickly spin the ring to activate the camera while the phone is at the home screen. This avoids any need to key presses and will get you to shooting your picture almost immediately. The lens ring can also be used to manipulate the selection of various photography functions as well as access to the gallery. While shooting, the lens ring can be used for zooming as well as manual focus.

Although our time with the Galaxy S4 Zoom was rather limited, we did find a peculiar issue with the handling, especially when you're trying to shoot with one hand. If you're holding the camera with one hand (presumably your right hand), we found the lack of a thumb rest rather troubling. In fact, most of the time, our thumb would rest on the back key of the phone and this accidental action kept throwing us out of the camera mode. It was also difficult to shoot without any of your other fingers resting on the screen because there are very limited areas you could hold the camera. The best way to hold, is of course, along the sides but that would require two hands. Perhaps we may have handled the camera wrong, so when we do get more personal time with the device, we would be able to figure it out. So you'll have to stay tuned for the full review later on. 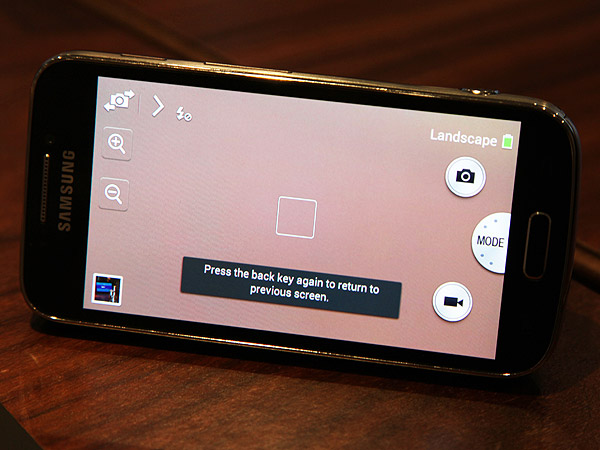 The new Samsung Galaxy S4 Zoom is a rather unique device that combines the best of smartphone technology with digital compact camera optics. It's hard to tell if this would gain mainstream momentum but we're pretty sure that it'll appeal to a certain group of users, particularly those who use the digital camera in their professional work, like property agents. Still, for the regular consumer thinking of buying a digital compact camera, the Galaxy S4 Zoom may just find a home in the pocket of those who want the convenience in managing their digital assets. In fact, when it comes to storage and ease of access, Samsung is making it even easier by pre-loading and offering 50GB of Dropbox storage for 2 years. But if you do run out of space, you can always download Flickr from Google Play and immediately upsize to 1TB of photo storage.