Review: Samsung Galaxy S6 and S6 Edge - The bar has been raised

After years of using Qualcomm processors, this year Samsung has broken away from the pack, and is using its own Exynos 7420 SoC rather than the Qualcomm Snapdragon 810 we expect to see in most of the other Android flagships this year, such as HTC's One M9 (and that we've already seen in the LG G Flex 2).

The Exynos 7420 certainly looks impressive on paper. Like the Snapdragon 810, the 64-bit processor is based on ARM's big.LITTLE architecture with four Cortex-A57 cores at 2.1GHz and four Cortex-A53 cores at 1.5GHz. Where it differs from the 810 is that it is the first mobile chipset to be built on a 14nm fabrication process (the Snapdragon 810 is 20nm). This makes it more power efficient, which should also reduce the chance of overheating and any subsequent thermal throttling problems like the ones the Snapdragon 810 was facing when it was first introduced. As for the GPU, Samsung is using a Mali-T760 from ARM.

SunSpider Javascript helps measure the browsing performance of a device when processing Javascript. It not only takes into consideration the underlying hardware performance, but also assesses how optimized a particular platform is at delivering a high-speed web browsing experience. Both devices scored very well here. In fact, their scores are a little suspicious, especially when you take into account that they're twice as good as any other Android-based smartphone and Samsung's past history of boosting benchmark scores. Having said that, in actual usage, both devices were snappy and responsive, delivering a smooth browsing experience without any lag or stuttering, so it's possible that the scores here might be real.

Quadrant is an Android benchmark that evaluates a device's CPU, memory, I/O and 3D graphics performance. The Exynos 7420 was very impressive here, easily beating Qualcomm's Snapdragon 810, with both the S6 and S6 Edge outscoring the LG G Flex 2 by a massive 35 percent.

For an in-depth understanding of 3DMark for Android, do head over to our article, "3DMark - Android Device GPU Performance Review." In a nutshell, it is an OpenGL ES 2.0 benchmark test that uses fixed off-screen rendering to run two graphics tests designed to stress the GPU performance of your device and a physics test to stress its CPU performance. The benchmark consists of three test portfolios:- Standard (720p resolution rendering), Extreme (1080p resolution rendering with higher quality textures and post-processing effects) and Unlimited (disabled v-sync, display scaling and other OS factors that make it ideal for chipset comparison).

As all recent flagship smartphones have been maxing out the scores on the Standard and Extreme tests, we will only be looking at the scores for Ice Storm Unlimited.

If there's one area where Qualcomm seems to have Samsung beat, it's the GPU, with both the S6 and S6 Edge falling slightly behind the LG G Flex 2's Adreno 430 GPU in this benchmark. Having said that, the Exynos 7420's Mali-T760 ARM GPU was still quite decent, and easily outperformed the Apple iPhone 6's PowerVR GX6450 and the S5's Adreno 330 GPU.

The camera on both the S6 and S6 Edge is identical, and uses the same 16MP Sony IMX240 sensor that we saw on the Galaxy Note 4, but with a new wider f/1.9 aperture lens. Like the Note 4 and Note Edge, both phones have built-in optical stabilization for easy shooting in low-light situations. Samsung has also added a couple of new features, our favorite of which is the simple camera Quick Launch: double press the Home key from anywhere on the UI - even while the screen is off - and the camera app launches in less than a second.

The default camera UI is fairly simple, and is the same for both phones. We really liked the Note Edge's camera app, with the settings relocated to the edge display, so we were a bit disappointed to not see it return for the S6 Edge. However the S6 Edge's curvature is more aggressive than on the Note Edge, thus there's a design limitation preventing the feature from making its way on the S6 Edge. As with most phones, the volume keys double up as a shutter button, and you can also activate burst mode (up to a maximum of 30 shots) by holding down either the volume butter or the on-screen shutter button. Testing burst mode, we must admit that the phone is really fast and is able to capture shots successively.

Both phones come loaded with a variety of different shooting modes, ranging from slow motion and fast motion (time lapse) to panorama and selective focus, the bokeh-imitating mode we saw in last year's S5. Selective focus is still a bit gimmicky, snapping two photos in quick succession and then letting you choose between near or far focus, and blurring the fore or background appropriately, but it doesn't do the best job at distinguishing the outline of objects. Actually, the f/1.9 lens is wide enough that you can get a nice natural bokeh effect without any software wizardry, especially on macro shots: 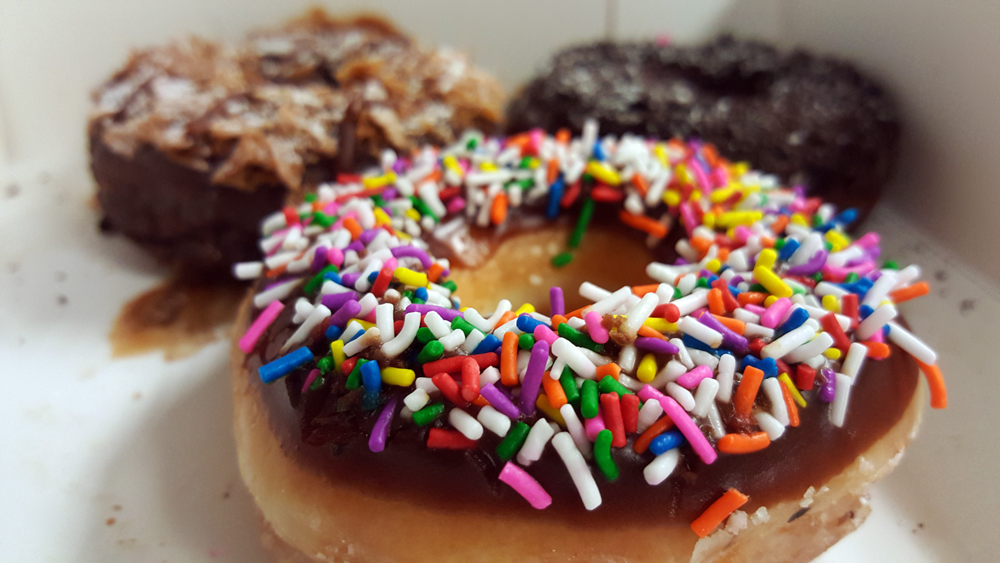 The mode you'll probably use the most is the new Pro mode, which gives you manual control over focus, ISO settings, exposure compensation, white balance and color balance. You could do all of this on the Note 4 and Note Edge, but the UI wasn't as simple to use, and you had to fiddle around in the settings menu to access them. As a nice touch, you can even save your current manual settings as a preset to use again later. This mode is surprisingly advanced and we were very impressed with the color balance settings. You get several presets to choose from, but you can also make your own if you can't find anything you like. There are sliders to boost shadows or highlights, and you can adjust the contrast and saturation, and even the temperature and tint. 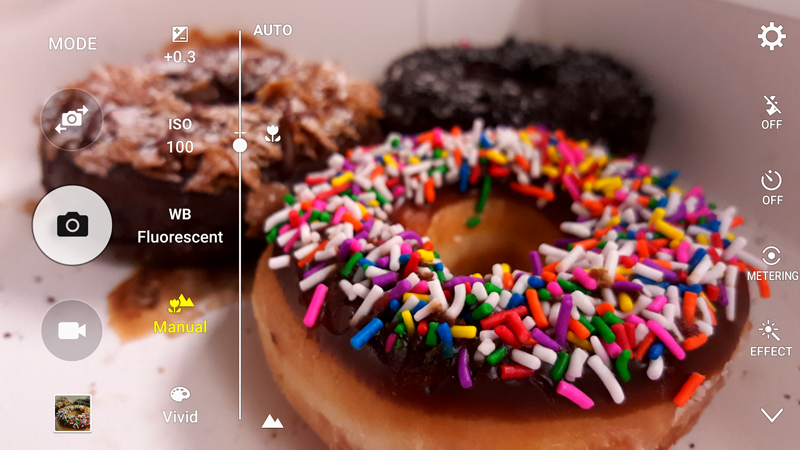 Image quality on the S6 and S6 Edge is excellent, with an impressive level of detail retention and sharpness throughout the picture. Noise is kept in check even when shooting at high ISO settings and we couldn't spot any artifacts from software processing. The optical image stabilization works well too, and lets you shoot at relatively slow shutter speeds even in dim lighting. White balance is always spot on, even in tricky lighting conditions, and colors remain accurate too. 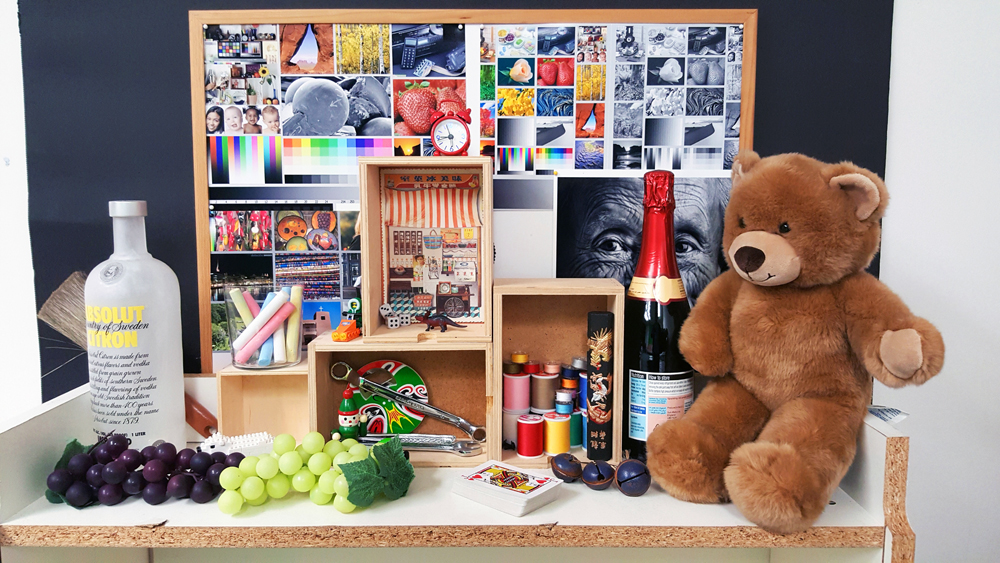 Here's the one area where the S6 differs internally from the S6 Edge. The S6 has a 2,550mAh battery while the Edge has a slightly larger 2,600mAh one. As mentioned before, both batteries are sealed, so you won't be able to remove and replace them like most of Samsung's other phones.

Battery life was quite decent considering both phones' QHD resolution screens, with the S6 Edge running for just over eight hours, and the S6 for just under. Just for comparison, the QHD LG G3 lasted for a mere six hours. Still, it's worth noting that last year's S5 lasted about half an hour longer.

As a nice additional feature, both phones support wireless charging and are actually compatible with both the Qi standard, as well as the lesser-known PMA standard, ensuring that you'll be able to charge your device anywhere that offers wireless charging.

We measure the portability of a device by calculating its battery life to (weight x volume) ratio. Thanks to their light weight and relatively compact size, both phones actually scored quite well here, even with their less than stellar battery life. 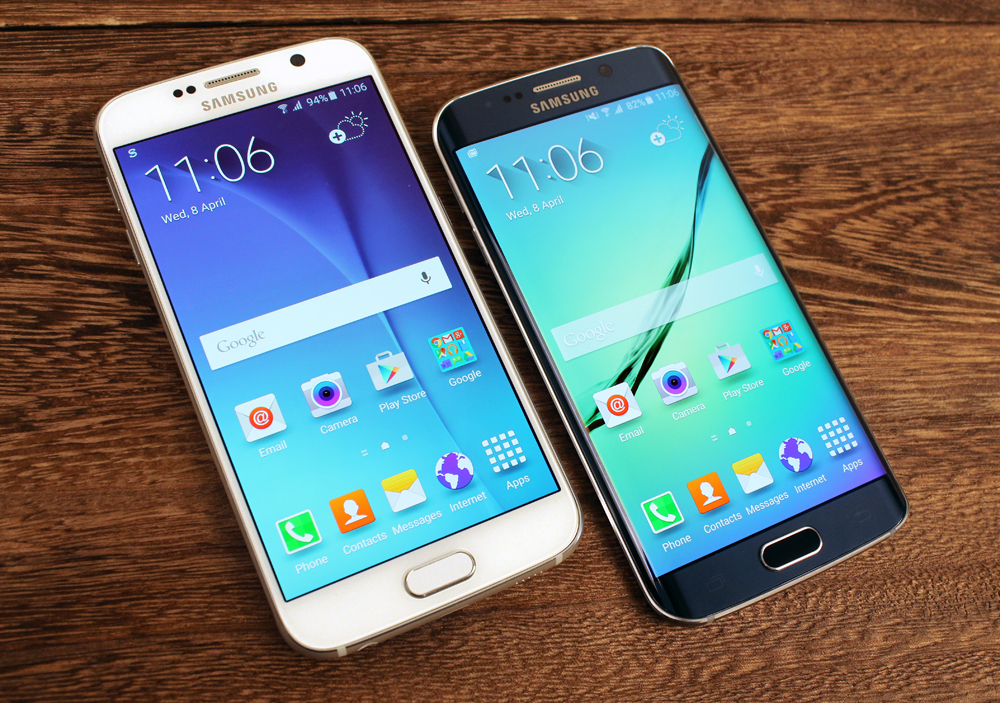 The S6 represents a new era for Samsung. Like its predecessors, the S6 is packed with high-performance hardware, but this time it does so with a new attention to aesthetics and build quality that is second to none. It's not perfect - that rear camera module really does stick out a lot - but it's the best thing Samsung has ever made, and as of the time of reviewing these devices, there's no better phone out there.

Performance-wise, Samsung has shown that it doesn't need Qualcomm, and its Exynos 7420 can easily match or exceed the Snapdragon 810 in most benchmarks. For the record, throughout all of our testing neither the S6 or the S6 Edge ever felt warm, something we can't say for the LG G Flex 2. And Samsung has finally gotten its software right too, stripping out bloatware and fixing problems that didn't just affect the S5, but have plagued Samsung phones for years.

Now the only question is, which one do you buy? We expect the regular S6 to be the model that will end up in most people's pockets, and rightfully so, but there's just something special about the S6 Edge that calls to us. To be perfectly clear, there's very little functional benefit to the Edge, it does everything the regular S6 does, and what few extra tricks it does bring aren't even all that useful, but it's undeniably one of the most attractive phones we've ever seen. The curved display is a beauty to behold, and a real joy to use, and unlike other curved displays that try to sell you on functionality, or "immersion", the S6 Edge just exists to be gawked at, but that's all it needs. We get the feeling a lot of people will walk into a shop with the intention of buying a regular S6, and end up walking out with an S6 Edge and a huge grin on their face. And that's why the Galaxy S6 Edge gets our Editor's Choice award.