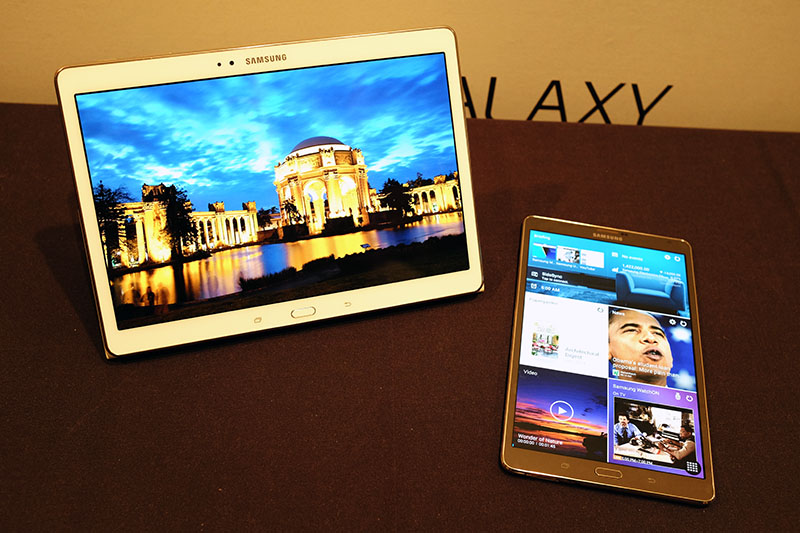 The Next Big Thing is Here for Tablets

While Apple maintains a leading 32% market share for tablets, Samsung is quickly catching up, increasing its market share to 22% in Q1 2014, thanks to new models like the Galaxy Note 10.1 (2014) and Galaxy Note Pro 12.2. But if that wasn't enough to make Apple worried, it should be when it sees Samsung's new premium flagship Galaxy Tab S tablets, 8.4- and 10.5-inch tablets with higher resolution 2560 x 1600 Super AMOLED displays and, despite having larger display sizes, thinner and lighter bodies than Apple's iPad Air and Mini with Retina display. Is this the iPad killer?

The Galaxy Tab S shares much of the same design philosophy as the Galaxy S5. Turn it over and you'll see the same dimpled, micro-dot pattern that people seem to either love or hate. As with almost all Samsung devices, both tablets are entirely plastic. 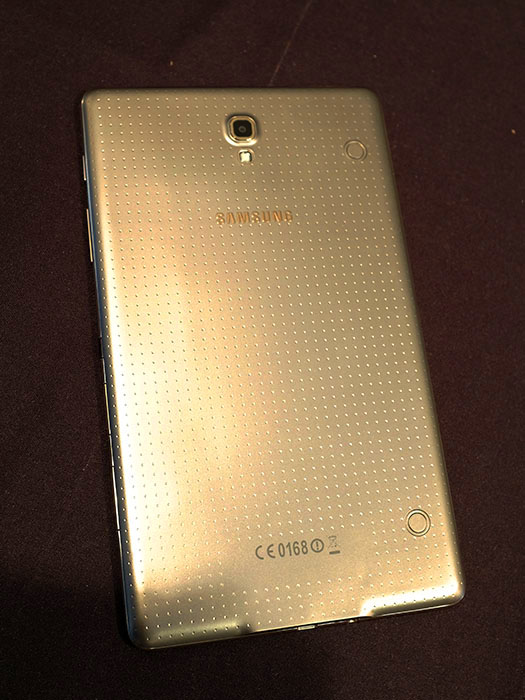 Two colors will be available at launch: Titanium Bronze, and Dazzling White, with both colors sporting rose-gold metallic edges. Samsung seems to have learned its lesson from the S5's Copper Gold color, opting for a more muted, less bandaid-looking, darker brown for the Tab S's Titanium Bronze finish. According to one Samsung designer we spoke to, the paint finish actually has more metal in it, which gives it a more premium look, although, realistically, it still looks plastic. The Dazzling White color appears to be the same iridescent off white that we saw on the Shimmery White S5. The designer we spoke to said that the Dazzling White "is inspired by the illumination of sunlight on a snow field" errr... okay. 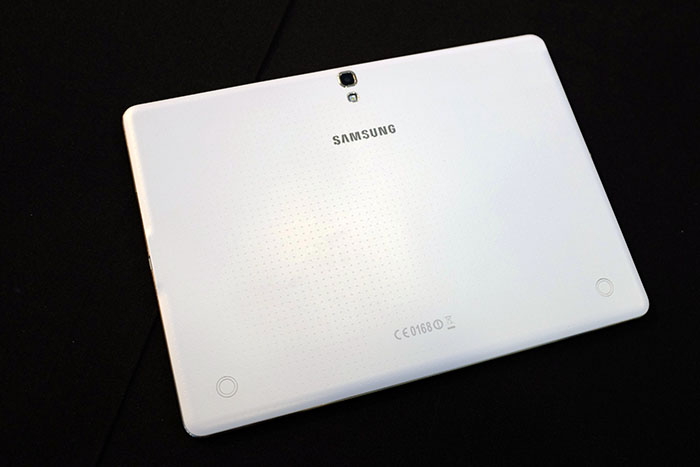 Unfortunately, there doesn't seem to be any plan to launch Electric Blue or Charcoal black at the moment, so you won't able to color match your S5 if you have one of those two colors.

Holding the Galaxy Tab S, it's impossible not to be impressed by just how thin and light the device is - it really feels like you're just holding a display in your hands.

Both models are just 6.6mm thick, which is nearly a full mm thinner than both the 7.5mm iPad Air and Mini with Retina Display. While the 10.5-inch model is slightly lighter than the iPad Air, coming in at 465g, compared to 469g for the iPad Air, the 8.4-inch model is substantially lighter than the iPad Mini with Retina Display at just 294g compared to 331g for the Mini.

The bezels along the edge are also quite thin, and both devices feel quite comfortable to hold. There is some slight flex evident if you try to bend the tablet, but its to be expected considering how thin the tablet is, and we weren't too worried overall.

Unfortunately, while the Tab S shares much of the S5's design, an IP67 rating isn't one of them, and it has no increased protection against dust or water.

Both tablets are armed with either a Samsung Exynos 5 Octa (1.9 GHz QuadCore + 1.3 GHz Quadcore) processor or Qualcomm Snapdragon 800 2.3GHz processor. Which processor you get will depend on region. Samsung has announced that there will be both 16 and 32GB models, however, in the US at least, we hear that the 16GB model will be the only model available at launch. As both tablets have microSD support up to 128GB this isn't as big of a deal, and we expect most people will just opt for the 16GB and then buy a microSD card. 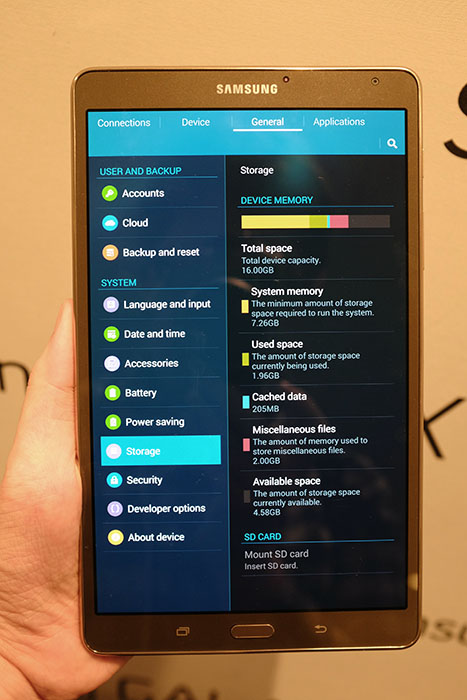 Samsung makes some of the best smartphone displays around, and it's always been a mystery as to why the majority of its tablets have been fitted with ordinary LCD displays. In fact, the last Samsung tablet to use a Super AMOLED display was 2012's Tab 7.7. Fortunately, that oversight has been corrected with the Tab S, with both tablets featuring absolutely gorgeous 2560 x 1600 pixels resolution Super AMOLED displays. This gives the 8.4-inch model 359 pixels-per-inch (beating the iPad Mini with Retina Display's 326) and the 10.5-inch model a ppi of 287 (beating the iPad Air's 264). Both displays are very bright and ultra sharp, and text and pictures look fantastic. 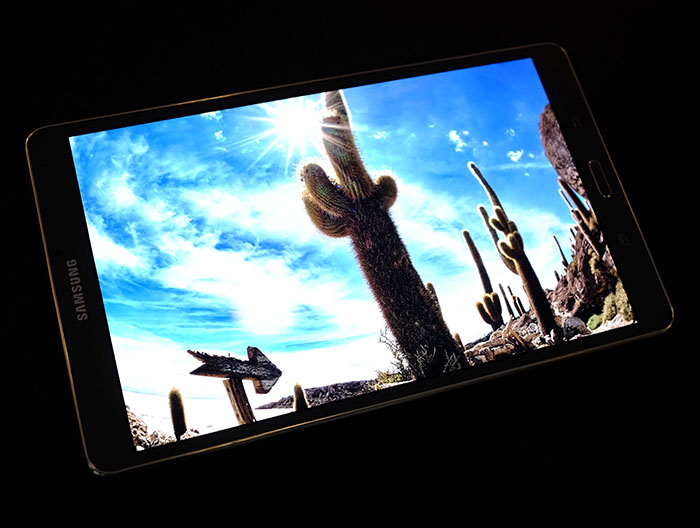 Thanks to the Super AMOLED display, contrast is far better than any of Samsung's previous tablets, with extremely dark blacks, and ultra vivid colors. The 10.5-inch model looks ideal for movie watching, and you can even share the screen and watch with friends, thanks to the excellent viewing angles. 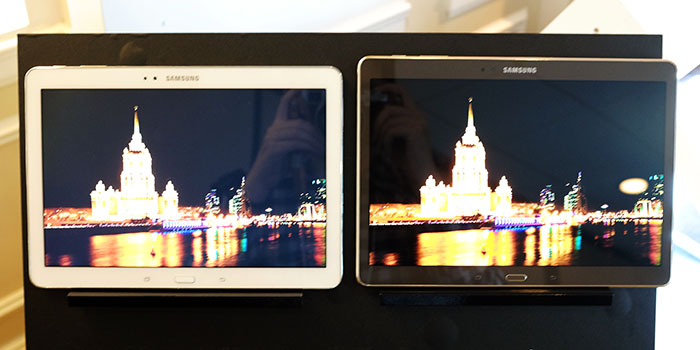 While the Tab S doesn't have the IP67 rating of the S5, it does have its fingerprint scanner. The scanner works in the same way, with a downwards swiping motion over the home button. We gave it a quick go and it seems basically unchanged from the S5's implementation - it's still not as good as the iPhone 5S' fingerprint scanner, but then no other tablet has a fingerprint scanner to begin with. You can store up to three fingerprints per profile and, as with the S5, you'll also be able to use the fingerprint scanner for online purchasing with Paypal. 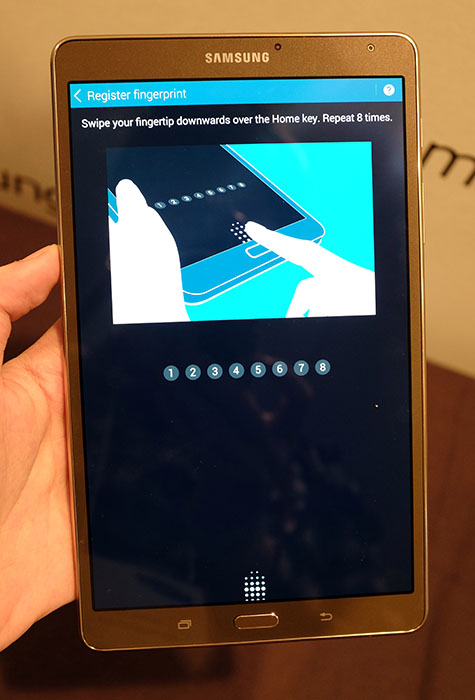 The Tab S runs Android KitKat 4.4, and includes the usual Samsung optimizations, such as Kids mode, Reading mode, and adaptive display lighting. The S5's Ultra Power Saving mode is also available on the Tab S. A few new features have also been added specifically for the Tab S. SideSync is Samsung's app that lets you clone your smartphone onto your tablet via WiFi Direct. You can use it to view and easily transfer content in between your smartphone and tablet, or to play your smartphone's games on your tablet. SideSync 3.0 will be released with the Tab S, and now also includes call forwarding on your tablet, letting you make and receive calls on your smartphone, and pick them up on your tablet. For now, call forwarding is only available when paired with an S5, however, support should be extended to other Samsung smartphones in future.

One of Samsung's product managers explained some of SideSync 3.0's features to us:

Another handy feature when you're in a phone call with somebody, is the drag-and-drop mode, which lets you easily share content such as Google Maps, website URLs or pictures by simply dragging and dropping the content directly onto the phone call. It will then send the content to that person via SMS.

A brand new feature specifically for Tab S is Papergarden, which is Samsung's new newsstand app with magazine content specifically optimized for the Tab S's Super AMOLED display. Unfortunately, Papergarden will only be available in the US, UK, Brazil and Korea at launch, although we're told more countries will be added eventually. 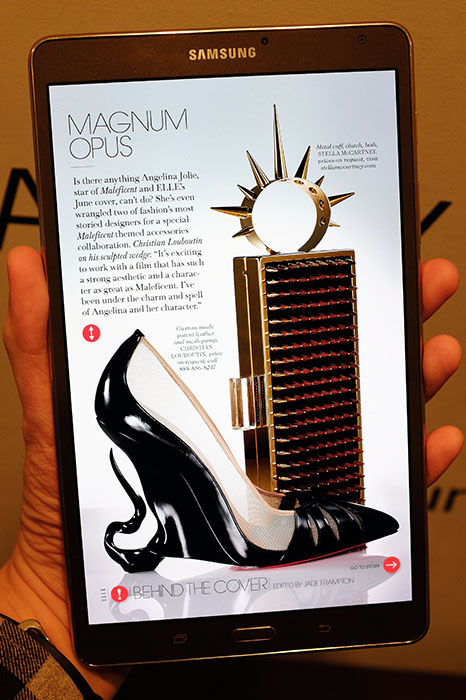 Two covers will be available for the Tab S, a Simple cover, which, as its name suggests, its just a front cover for the device, and a Book Cover, which wraps around the entire device and protects the rear. The Book Cover also acts as a stand, with three different viewing angles. Both the Simple and Book cover will be available in six colors: White, Bronze, Red, Blue, Black, Ivory 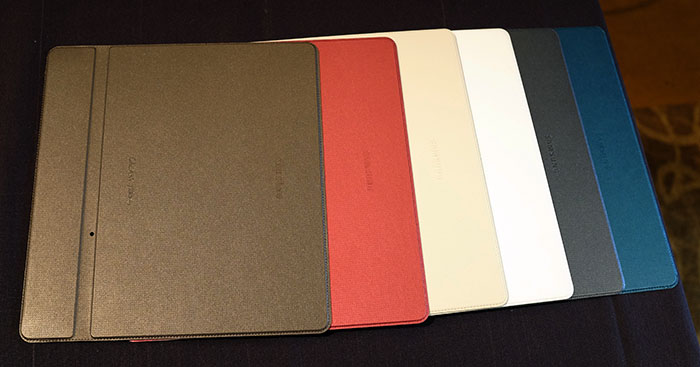 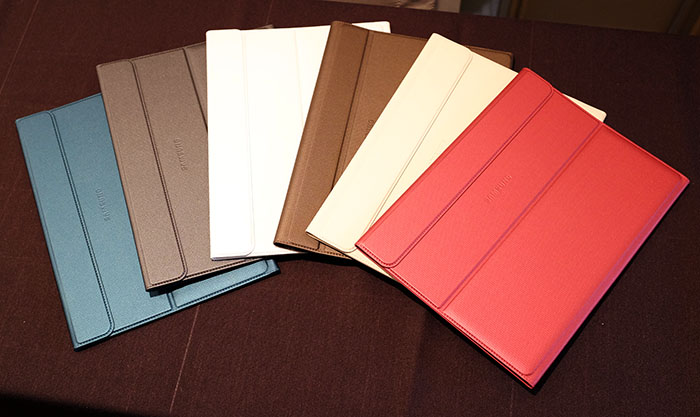 Unlike most tablet covers, the Tab S doesn't use magnets to attach, and instead, the tablet is fitted with two circular shapes on its rear. Without the cover, they don't do anything, and you can barely feel them as they're flat and flush with the rear. The covers have corresponding button-like protrusions that snap into these circles and are securely held in place. To remove them, just pull them out. It's a bit more fiddly than a magnet cover as you have to line up the button holes correctly, but it feels much more secure.

Along with the two covers, Samsung will also be releasing a Bluetooth keyboard case for the 10.5-inch Tab S, which will be available in Bronze or White to match the tablet colors. 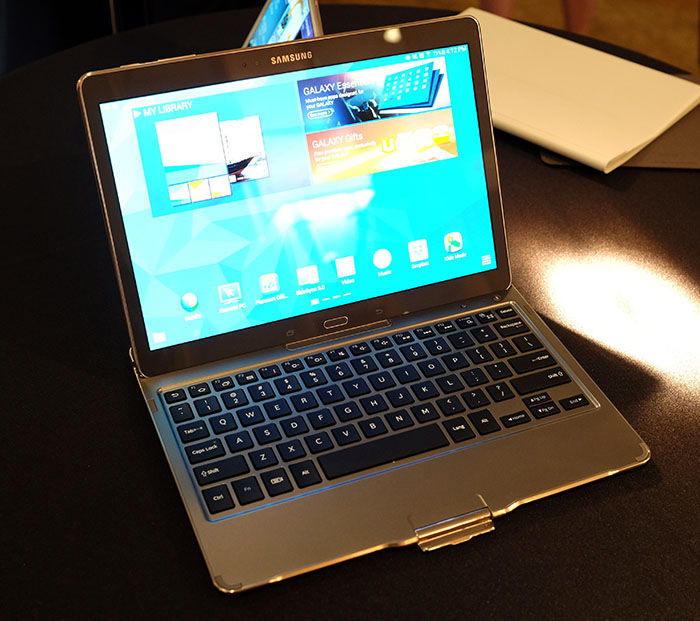 The keyboard includes a stand for the tablet, but unfortunately the viewing angle can't be adjusted. The keyboard itself is quite comfortable to type on, with firm, well-spaced chiclet keys. 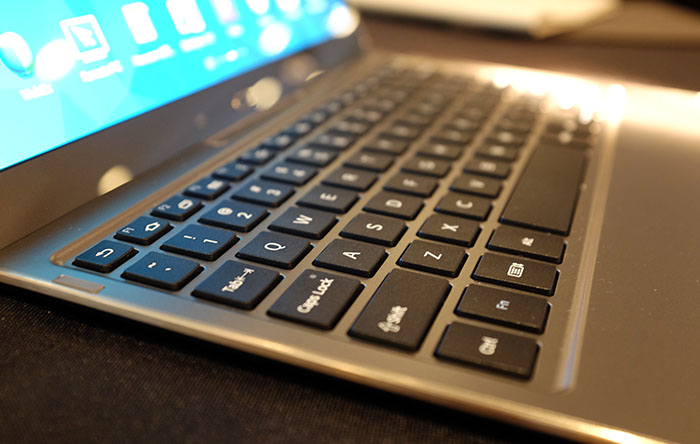 The Galaxy Tab S is Samsung's best ever tablet, and its pretty obvious that Samsung is trying to take it directly to Apple with these two devices. Specs-wise, Samsung emerges the winner, and the Tab S's Super AMOLED display is a real killer feature. While some might find its colors a bit too vivid, you can't fault its excellent contrast and viewing angles, and it's probably the best display we've seen on any tablet so far.

Design-wise, Apple probably wins, and it's unfortunate that Samsung is still stubbornly sticking to plastic everything, but if plastic means lighter, we suppose it's a reasonable trade-off.

Both the 8.4 and 10.5 inch Tab S will be launching in the US in June, with the 8.4-inch model retailing for US$399, and the 10.5-inch model available for US$499, which happens to be the exact same prices as the Wi-Fi 16GB iPad Mini with Retina and iPad Air, by the way. The Tab S's microSD support up to 128GB could be a big selling point for Samsung, as Apple users are forced to pay nearly double the price for 128GB internal storage.