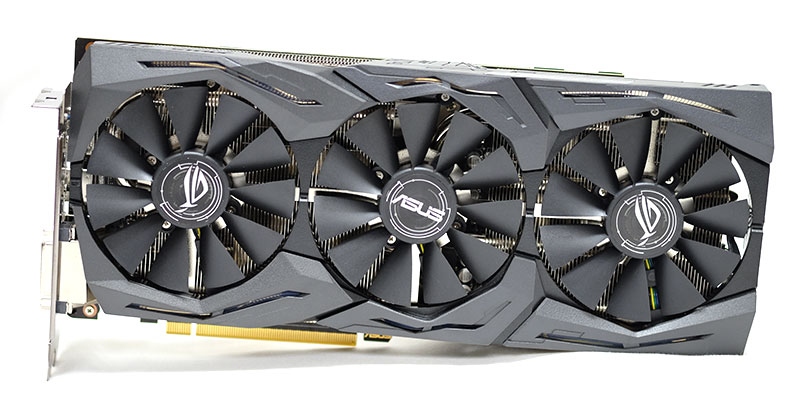 The design of the ASUS ROG Strix GeForce GTX 1060 OC hews close to that on ASUS’ other Pascal-based ROG Strix cards. This means a stealthy, all-black cooling shroud that can look almost boring. We say look, because the card actually comes alive once you plug it in, with LED lights on the cooling shroud and on its side. These are part of ASUS’ Aura RGB feature set, and can be customized using the Aura utility (more on that later).

Suffice to say, don’t judge the card on its looks before you’ve plugged it in. Here's a glimpse of how it looks when lighted up on the ASUS product page: 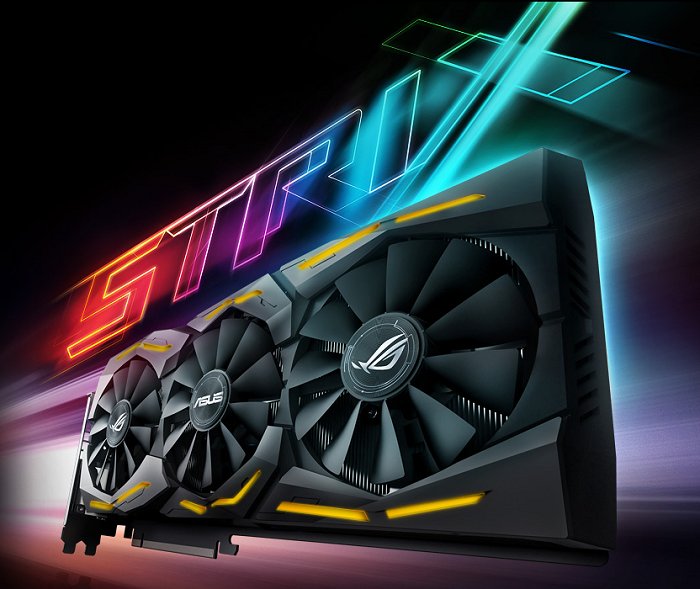 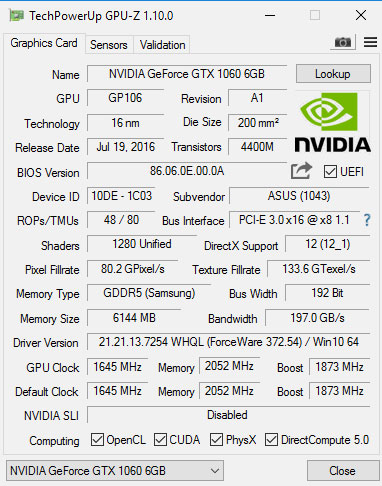 To deal with faster speeds, ASUS has gone with its own DirectCU III cooling solution with triple wing-blade fans. If you’ve spent any time at all observing the graphics card industry, you’ll notice that pretty much most brands have their own name for their own fan designs. The implementation always ends up looking different, but the object is the same – quieter operation and higher air flow.

We also set the fans to work at full speed to see how noisy they could get. While they do get fairly audible, the tone was less annoying than the Gigabyte card when running at maximum speed. With that said, the fans won’t run at full speed as often during regular use, and when you add on the sound insulation that comes from installing the card in a case (we used ours on an open test bench), you shouldn’t have to worry about noise at all. 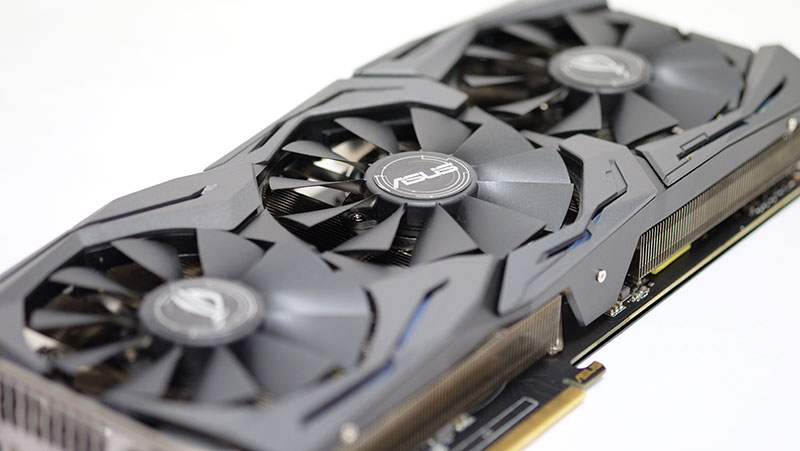 When put to the test, the DirectCU III cooler performs quite well. In fact, it put in the best performance in this shootout, so you shouldn’t worry that the higher factory overclocks will lead to toastier temperatures.

The heatsink spans nearly the entire length of the card, and is as chunky as it can go without encroaching into triple-slot card territory. There are a total of five direct contact heatpipes between the GPU baseplate and the heatsink, and you might even argue that this is overkill – albeit in a good way – for a 120-watt card. The beefy heatsink is the same one used on the ROG Strix GeForce GTX 1070. This means that the card has a decent degree of passive cooling capabilities to fall back on before switching to active cooling, which allows the semi-passive fans to remain idle for longer.

The PCB utilizes a 6+1 phase power design, an upgrade from the original 3+1 phase power delivery system on the Founders Edition card. It certainly looks like ASUS has over built the card this time, and that’s actually the case with the cards from Gigabyte and MSI, as well. Because of the limits NVIDIA has placed on the card’s 120-watt TDP and overvoltage settings, the card will not run anywhere close to the limits of the 6+1 phase system.

Another standout feature is ASUS’ FanConnect technology, which takes the form of two 4-pin fan headers located at the tail end of the card. ASUS is currently the only brand to offer this feature, and it allows you to connect two chassis fans to the GPU and peg them to the GPU’s temperature instead of the CPU. This is a neat idea – it makes sense as GPUs are usually the single largest source of heat in any chassis (especially when it's at load), even if there isn’t exactly a pressing need for it.

Like most custom cards, ASUS has also beefed-up the power draw capabilities of the card, replacing the 6-pin PCIe header on the Founders Edition model with an 8-pin one and bringing the total available power draw up to 225 watts from 150 watts. This theoretically gives more overclocking headroom, and a white status LED indicator will light up if a successful connection has been established. This will come in useful when troubleshooting, as it lets you rule out loose power connectors as the problem.

In addition, ASUS has made some changes to the usual selection of display connectors. One of the DisplayPort connectors has been replaced with an HDMI port, so you get two of each type of connector, plus one further DVI port. This is mainly a design decision motivated by convenience, as you can now connect both a VR headset and HDMI display at the same time without needing to hunt for a different cable or adapter.

Finally, there’s the usual software bundle to help you squeeze out the most from the card. The Aura lighting control utility is nothing special, and offers the run-of-the-mill options for color control and effects. A separate GPU Tweak II software lets you switch between Silent, Gaming, and OC modes, and provides access to several overclocking controls like voltage, power targets, and clock speeds.

The interface is straightforward enough to use, and first-timers should have little trouble navigating and getting things to work. 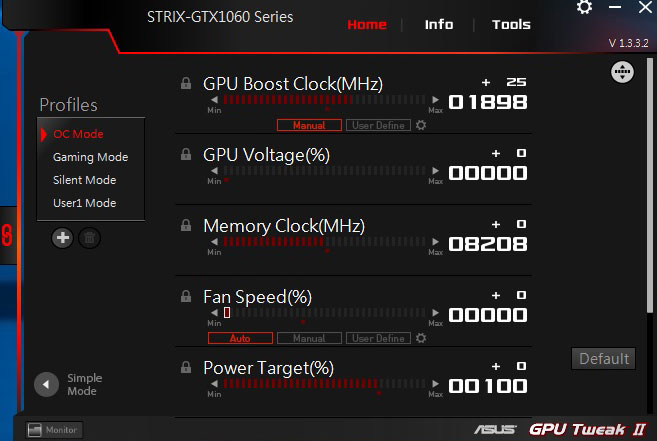 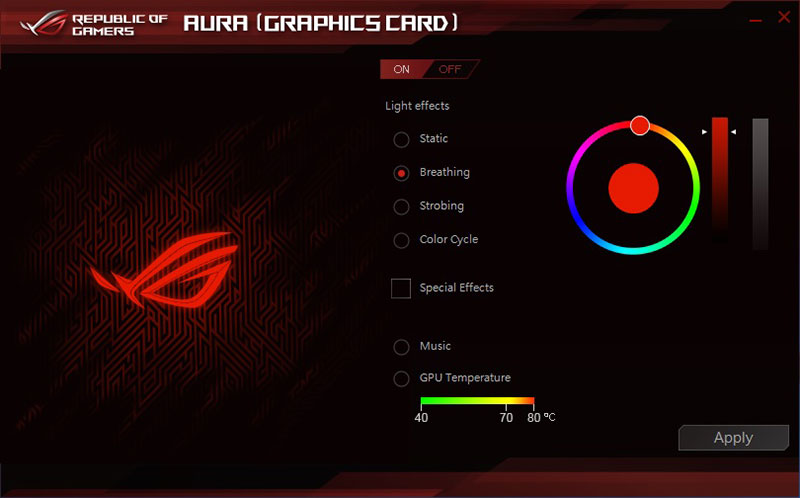