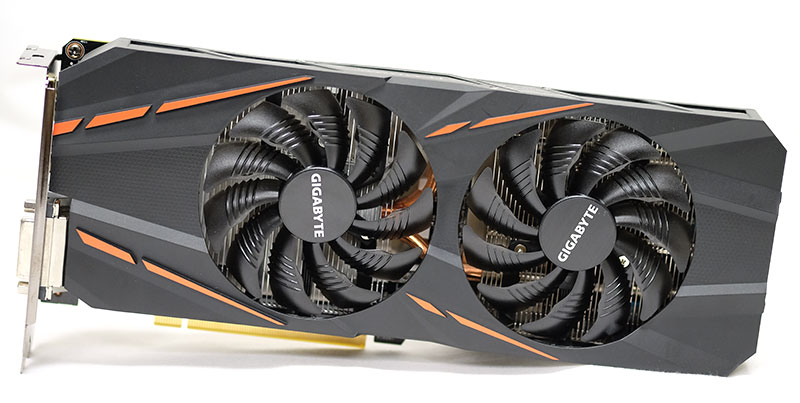 We actually like the look of the Gigabyte card the most. With a black shroud and bright orange accents, the card manages to ooze gamer cred while still being quite tasteful.

Compared to the WindForce 3X cooler on the Gigabyte GeForce GTX 1080 G1 Gaming, however, the WindForce 2X has scaled back on certain elements of the cooling apparatus. For instance, while the latter features three pure copper composite heatpipes, the dual-fan cooler has just two direct contact heatpipes (they’ve been flattened to maximize contact area) to draw heat away from the GPU.

When set to work at 100 percent, the fans on the Gigabyte card could really get quite loud (the pitch was also slightly more grating on the ears than the ASUS card). Still, we tested this in an open test bench, and the noise is likely to be mitigated (somewhat) once the card is installed in a case.

In typical Gigabyte fashion, there’s a fan stop LED indicator on the side that will light up if the semi-passive fans begin to idle under low loads. While informative for the uninformed, we’ve always thought this feature had little utility, and it actually detracts from the aesthetics of the card.

The Gigabyte logo beside the LED indicator is illuminated, as well, and you can customize the color of the LEDs and choose from a range of lighting effects. The lights are perhaps a little less impressive than the other cards that have LEDs built into the plastic of the shroud, but those who prefer a more subtle look may prefer Gigabyte’s approach.

The card uses a 6+1 phase power delivery system, the same as the ASUS card, which once again is plenty for the GeForce GTX 1060.

In addition, Gigabyte has swapped out the regular 6-pin PCIe connector for an 8-pin. This raises the power ceiling for the card, and should provide just that bit more of overclocking headroom.

Round the back, the display connectors are the same as on the MSI card, which to say the same as the reference Founders Edition model. Neither Gigabyte nor MSI thought it important enough to replace a DisplayPort connector with an HDMI one, and we can’t exactly fault them in this area. ASUS’ choice is more a value-added feature rather than a necessity, and we hardly think users will be worse off without it.

On the software front, Gigabyte’s Xtreme Engine utility has a plethora of advanced options for overclockers. Other than the ability to customize the LED lights, you can set things like the precise amount you want to overvolt by, target temperature and power limits, and even set GPU clock speeds for individual voltages.

We thought it a little strange that something as basic as the toggle for Eco, Gaming, and OC modes should be located under the Advanced OC tab, but it shouldn’t take you long to get used to the quirks of the interface. 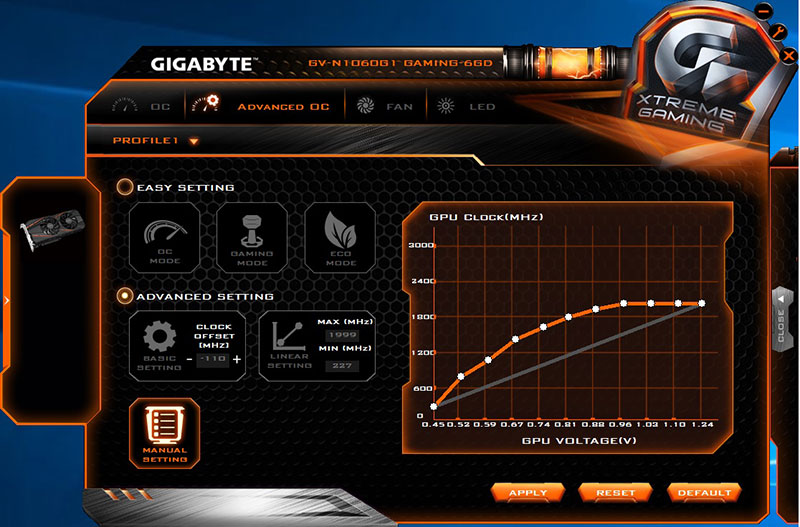 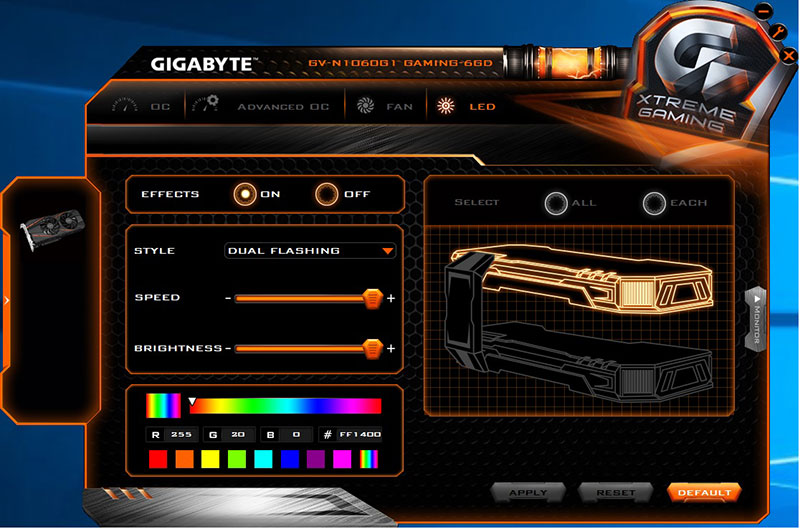