When we reviewed the Samsung SSD 850 Pro back in July last year, we called it a “game changer” because it is one of the most important and eagerly anticipated drives in quite some time. Despite the number of players in this market, truly great and important innovations in the SSD and NAND memory space are few and we are reaching a point where existing technologies in manufacturing are facing diminishing returns. Samsung’s new 3D V-NAND claims to be able to solve this problem and also improve performance and endurance, and judging from the results of the SSD 850 Pro and also the SSD 850 Evo, we have no reason to disbelieve that.

The Intel SSD 730 Series marks the company’s return to the high-end consumer SSD scene, but it falls flat. Performance was especially underwhelming for a drive that purports to cater to enthusiasts, and much of the blame can be directed at Intel’s puzzling decision to outfit the drive with 128Gbit NAND. which resulted in abysmal write performance since the controller’s potential cannot be realized. And while the Intel SSD 730 Series does promise higher endurance, it is also outdone by the Samsung SSD 850 Pro in this aspect. On the flip side, we did see some glimpses of what the drive was capable of on the enterprise-oriented "File Server" and "Web Server" workloads in Iometer. If only Intel had populated the drive with 64Gbit NAND.

The SanDisk Extreme Pro performed significantly better than the Intel SSD 730 and is one of the faster drives in the market right now, but it does suffer from some inconsistencies in certain workloads and scenarios. Thankfully, that is not enough to detract the fact that it is a very capable performer. SanDisk’s decision to back the Extreme Pro with 10-year long warranties should also be applauded, even if it comes across as a bit of a marketing ploy since endurance of SanDisk’s new NAND has not improved significantly. 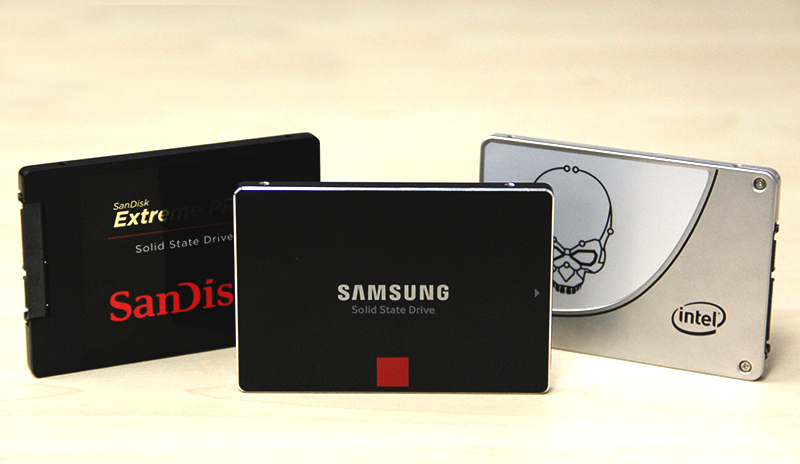 Taking on the Samsung SSD 850 Pro was always going to be a challenge, not least because of its stunning performance and consistency. And then there is its 10-year warranty and rated endurance of 150TB, which is the highest by far of any consumer SSD - the Intel SSD 730 Series comes in at 91TB, whereas the SanDisk Extreme Pro’s figure is 80TB. All things considered, the performance crown is still safely within Samsung’s hand.

The market for SSD is very tightly contested and considering what the drives offer, it is hard not to recommend the faster and higher endurance Samsung SSD 850 Pro over the Intel SSD 730 Series and SanDisk Extreme Pro. The Intel and SanDisk drives find themselves up against a very formidable opponent in this segment of the market. Samsung has been a dominating force in the consumer SSD scene for the past two or so years and they show no signs of letting up. The older SSD 840 Pro was a top drive and the SSD 850 Pro has surpassed it in every way.

If these prices are too much for you to stomach, there are other more affordable and worthy alternatives. The Plextor M6 Pro offers very competitive performance and is priced in a segment that has little competition other than the Samsung SSD 850 Evo. For bargain hunters, the old Samsung SSD 840 Evo, Crucial M550 and MX100 are the best sub-$200 SSDs around for a 250GB capacity drive.