#ThisHappened in the Philippines this year

#ThisHappened in the Philippines this year

The country’s trending moments became global conversations on Twitter, be it the National Elections (Top Moment of the Year), fan support for global phenomenon AlDub and TV show OTWOL (On the Wings of Love), Filipino boxing legend Manny Pacquiao came out victorious on both his retirement and comeback fights, and the devastation brought by Super Typhoon Lawin. Meanwhile, the Twitter community in The Philippines raised their voices when Filipino talents earned the spotlight at the Kid’s Choice Awards, K-pop boyband Bantan Boys held a concert in Manila, school cheers during the UAAP national competition, national pride for the homecoming of Miss Universe Pia Wurtzbach, and the controversial burial of former president Marcos.

The first live TV debates in 24 years among the Presidential and Vice-Presidential candidates drew millions of Filipinos to Twitter with #PilipinasDebates2016 earning the Top Hashtag of the Year in The Philippines. The global audience on Twitter was treated to repartees that were filled with both wit, humour, deep knowledge of the subject matter, or lack thereof.

With all these key moments, who would have thought that the Golden Tweet of The Philippines for 2016 would turn out to be about…a puppy! Coming from @NotebookMsgs, a Philippines-based motivational account, this photo Tweet was more than a reflection of Filipinos’ love for dogs. This sad, tired young canine may sum up the mood of millennials after the emotional roller coaster that was the National Elections, when Duterte won the official vote count on May 27th to become the next President.

Here’s a closer look at the #YearOnTwitter in 2016 for The Philippines:

Twitter is where Filipinos go to see what’s happening everywhere in the world right now. From breaking news and entertainment to sports and politics - from big events to everyday interests with all the live commentary that makes Twitter special. These are the most influential moments on Twitter - where Filipinos went first to ask questions, get answers or share ideas about the biggest conversations happening in The Philippines and the world throughout 2016. 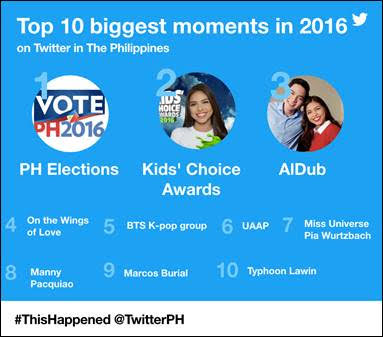 The first-ever #TwitterElection in The Philippines was the most talked about with over 35 million elections-related Tweets, and the conversations on Twitter kept flowing with reactions to President Duterte's actions and words through the year. Twitter worked closely with the COMELEC (@COMELEC) on #PiliPinas2016 to inspire Filipinos to engage and discuss their opinions via Tweets on important topics to shape their voting decision. On election day alone, more than four million election-related Tweets were recorded. In addition to 330,000 Tweets on Inauguration Day, Twitter introduced an exclusive emoji for the new president - #PresidentDuterte, the first time that Twitter created a special emoji for an elected leader of a nation anywhere in the world. And Filipinos sent over 280,000 Tweets using #SONA2016 responding to Duterte's first State of the Nation Address. No doubt that Twitter is the place to see and react to Duterte's every move while he is the President of The Philippines.

The 2016 Nickelodeon's Kids Choice Awards nominated four Filipino celebrities for the Favourite Pinoy Personality Award - Maine Mendoza (@mainedcm), Kathryn Bernardo (@bernardokath), Enrique Gil (@itsenriquegi), James Reid (@JayeHanash) - as well as Filipino basketball player Jeron Teng for the Favourite Asian Sports Star Award. On Twitter, fans battled it out to campaign for their favourite award nominee by sending millions of Tweets such as #VoteMaineFPP and #VoteKathrynFPP. In the end, Maine was crowned as the Favorite Pinoy Personality and Jeron won the regional sports star award, making it a double-win for The Philippines at KCA this year.

The AlDub love team (Maine Mendoza @mainedcm and Alden Richards (@aldenrichards02) from the ‘Kalyeserye’ segment of the popular noon-time TV show Eat Bulaga (@EatBulaga) and their fans continue to be a force on Twitter. AlDub amassed over 200 related hashtags lighting up key milestones throughout the year. The love team’s road to Twitter stardom continued as AlDub's Valentine’s day campaign #AlDubIsLove amassed over 4.1 million Tweets. In July, AlDub celebrated their #AlDub1stAnniversary with 6.6 million Tweets along with a customized Twitter emoji, the first created for a TV show in Southeast Asia. In appreciation of their fans' support, the couple had their first movie #AlDubImagineYouAndMe, which accumulated 7.8 million Tweets in its first week. When the couple finally tied the knot last October 22, fans sent over 8 million Tweets using the #AlDubWedding hashtag.

On The Wings Of Love

OTWOL (On the Wings of Love) is one of the top-rated teleseryes on Philippine television for 2016 and their popularity reflected in the deluge of conversations on Twitter. This hot love team pairs two of the most popular teens of this generation: Nadine Lustre (@hellobangsie) and James Reid (@JayeHanash) popularly known as #JaDine. OTWOL is the love story of the characters Clark and Leah who conquered immigration challenges in the US to be together. Filipinos got so hooked on the plot that they marked significant moments with hashtags such as #OTWOLArrival, #OTWOLMostKiligNight, #OTWOLTheAminanNight and #OTWOLTheLastFlight.

University of Athletic Association of The Philippines

#UAAP (University Athletic Association of The Philippines) is the most-awaited annual intercollegiate sports competition in The Philippines and millennials sent millions of Tweets to support their favourite athletes and teams. Top athletes from universities all over the country competed in a number of sports such as basketball, volleyball, and the heart-stopping cheerdancing not only to for the title but also for their Alma Mater's pride. As a special treat, fans of #UAAPCheerdance2016 cheered on Twitter for their best pep squad using the McDonald's UAAP cheerdance stickers, the first Promoted Stickers in Southeast Asia.

The homecoming of 2015 Miss Universe Pia Wurtzbach (@MissUniverse) to The Philippines in January saw a proud nation of Pinoys welcome her home on Twitter, where they expressed pride and adoration using #MissUMostBeautifulDay, #PiaTheRoadToTheCrown and #WelcomeHomePia hashtags. Generating over 430,000 Tweets for Homecoming Queen, Pia's fans also got a special session with her via the #AskMissUniverse Twitter Q&A party. In April, Queen Pia had the honor of passing on the crown to the new #BbPilipinas2016 Universe Maxine Medina (@maxinemedina), an event that amassed 340,000 Tweets as she took her final walk on stage and gave a very emotional, heartfelt farewell speech.

Manny Pacquiao (@mannypacquiao) had several momentous occasions this year that cemented his legacy as the "People's Champ". First his fans flocked to Twitter to support Pacquiao after winning his retirement fight with Timothy Bradley with over 380,000 Tweets for his #PacBradley fight on April 9th. Then PacMan's popularity grew even more after becoming the first Filipino professional boxer to be elected in the Philippine senate. Finally, unable to silence the call of the warrior in him, Pacquiao returned to the ring for his #PacVargas fight and beat Las Vegas-native Jessie Vargas, scoring an additional 280,000 Tweets on November 6th.

Emotions ran high when plans of transferring the body of ousted President Ferdinand Marcos to the Libingan ng Bayani (Heroes' Cemetery) were revealed and granted by the Supreme Court. The #MarcosBurial conversation reverberated throughout Twitter when the public was surprised by the sudden execution of the burial. Even Philippine Vice President Leni Robredo (@lenirobredo) expressed her defiance over the Supreme Court decision by releasing a statement on Twitter. Meanwhile, millennials actively participated in nationwide protests throughout the country and shared their stand on this national issue with over 500,000 Tweets for the #MarcosNotAHero conversation on Twitter.

Typhoon Lawin (International name: Haima) was the most powerful typhoon to hit The Philippines this year, resulting in billions' worth of damage to infrastructure, agriculture and households. Through the typhoon, Filipinos went on Twitter to wish each other safety as well as to spread updates about the typhoon, relief and rescue operations, the suspension of classes and work. Over 440,000 Tweets were sent and popular hashtags included #LawinPH, #Haima, #PrayForPH, #rescuePH, #reliefPH, and #walangpasok.

Hashtags are the anchors of any solid conversation; they enable users to discover what others are talking about for an issue they care about. A wide range of topics - from politics, entertainment, sports - dominated the popular Twitter hashtag trends in The Philippines this year showing the diversity of conversations that Filipinos are having every day on the world’s largest live communications platform. 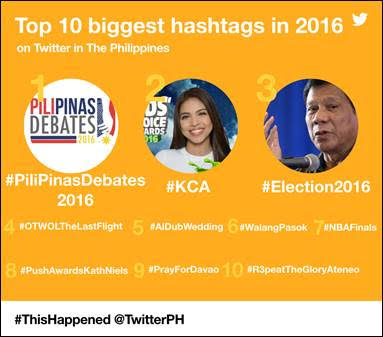 Filipino Twitter users are simply star struck. It is no wonder that the list of the Top 10 Most Followed Twitter accounts are dominated by entertainment celebrities, with the exception of a teen account for inspirational quotes (@ohteenquotes). Anne Curtis-Smith (@annecurtissmith) came up top with 8.44 million followers, with Angel Locsin (@143redangel) close behind in the second spot. Jose Marie Viceral (@vicegandako) came in third place and made the largest leap with an increase of 1.6 million followers since the start of the year.