Streaming video has changed the way we watch movies and TV shows. The living room TV used to be the place where everyone watched and played video games, but now that we have a smartphone, laptop, or tablet, anyone can consume anything, anywhere. So where does that leave the living room home theater? Is it doomed to being a relic of the early 21st century? Not entirely.

Why build a home theater?

Why bother putting together a home theater setup when you can just watch everything on your phone or laptop? The reason is because it’s just more fun to be immersed in whatever it is you’re watching, while you’re watching it. It’s the same reason why movie theaters are still around and the reason why IMAX is a popular premium movie-going experience: we all just want to “get lost” and get sucked in in what we’re watching, whether as a temporary escape or to experience it in a more visceral way.

The great thing about smartphones and tablets is that today’s TVs are more affordable and more capable: 30-inch flatscreen TVs that can connect to broadband or Wi-Fi is a fraction of what they used to cost half a decade ago. The same goes for home theater audio, a decent 5.1 system with an AV receiver is more budget-friendly than ever before.

A 5.5-inch smartphone screen may look incredibly sharp and lovely, but it’s very much a “personal” viewing experience instead of something to be shared - try putting your arm around a loved one while you’re streaming Netflix on an iPhone. It’s just not the same, the size of the screen when viewed at a distance contributes much to viewing experience. Most of the time, it’s just more enjoyable to watch videos on a larger screen than a tiny one.

Sound is another big factor that adds to the immersive experience of a home theater. A good surround sound system like the Pioneer Andrew Jones SP-PK52FS bundle sounds great and is priced within reach of a modest theater budget. It comes with a centre speaker, two floor standing front speakers, two rear speakers, and a subwoofer, giving you theater sound in a box. Being in the middle of a properly setup system just pulls you into what you’re watching or playing.

The home theater receiver is a crucial part of your set-up, especially if you’ll be using it for watching movies / shows, playing video games, and playing back music. The Pioneer VSX-531 is another solid and inexpensive option, allowing you to hook up your PS4 / Xbox one, your Chromecast / Apple TV, your laptop, and even your smartphone or tablet if you want to stream audio via Bluetooth. 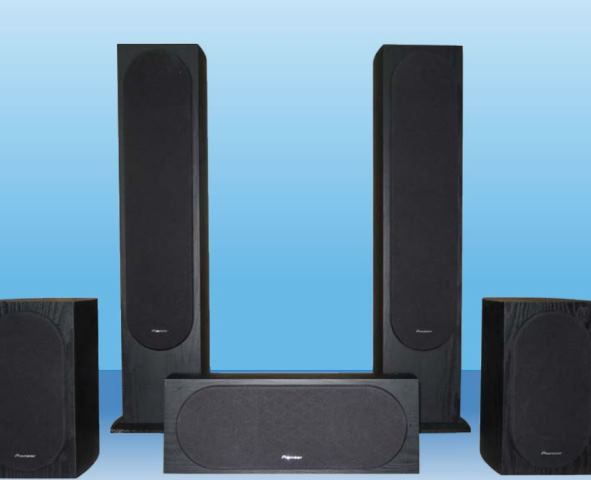 1. Watching shows on a big screen with full surround sound can’t be beat - Sure, watching Netflix on your iPhone with a pair of earbuds is convenient when you’re on the go, but it really can’t replace the experience of watching something on a big screen with a sound system specially designed for the task. Even the biggest, bassiest of headphones can’t compete with a basic subwoofer, like the Pioneer S-MS3SW, for roomshaking sound.

2. A group can’t watch a show on a phone screen - Having some friends over to binge watch a show or having a movie marathon just isn’t the same when you’re all squinting at a phone or tablet. Home theaters make video streaming a communal event, and something that’s fun for everyone instead of just whoever’s holding the phone closest to their face.

3. Leave work and distractions out of your viewing experience - When you kick back in the middle of your theater setup after a long day at work, you can focus on watching or listening to music without having to attend to pesky app alerts, e-mail notifications, and (god forbid) late night text messages from your boss. Having a dedicated space for consuming streaming videos and music makes it part of your “unwind ritual” and helps you to relax instead of having to juggle through apps and responding to messages if you were to watch it on a phone, tablet, or laptop. Just keep your smart devices on silent while you’re watching!

This article is brought to you by Pioneer.