Why you shouldn't miss next year's ESGS

Why you shouldn't miss next year's ESGS

The freezing halls of SMX Convention Center sheltered the biggest gaming event of the year: the Electronic Sports and Gaming Summit (ESGS). We fool you not, it was as worthy as the beach. If you happen to be a mix of an outgoing person and a gamer, and you were busy with your Nintendo DS riding a bus to Baguio, this article may hurt a bit for missing the chance to rub elbows with your fellow players. But having a flaming heart and being a true disciple of the  game, you might wanna know the reasons why you shouldn’t miss the next one! 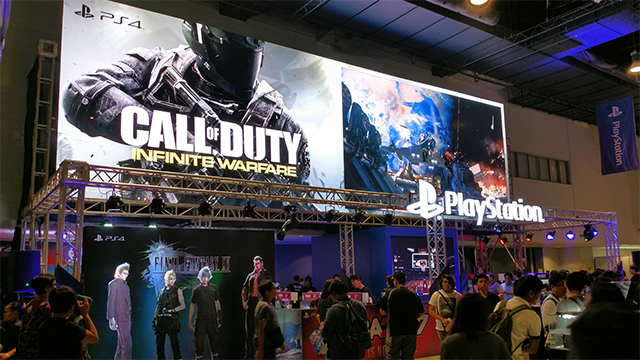 The ESGS 2016 organizers obviously planned to electrify the guests by igniting the fans in a lively manner: an experience booth planted by Sony PlayStation right after the front door. Upon entering the Hall 1 of SMX, Sony PlayStation offered comfortable seats and cozy entertainment sets to let the fans play NBA 2K16, Call of Duty: Infinite Warfare, and the highly-anticipated Final Fantasy XV – all for free. We tried to snitch a scoop of the latest installment in Final Fantasy and Call of Duty franchises, but Sony officials asked us to stop taking videos or pictures of the said video games. Set to be officially launched on November 4, 2016, the Call of Duty: Infinite Warfare is said to eat up 44GB-53GB of your PS4’s hard drive according to Charlie Intel’s report. Surely, this might force us to space out for the first-person shooter, but this should be all worth it. The recently moved in Ubisoft stood behind their giant Just Dance stage, tagged team with DataBlitz promoting the upcoming Ubisoft’s very own open world action-adventure Watch Dogs 2. The game follows the story of Marcus Holloway, a hacker who works with the hacking group DedSec to take down the city’s ctOS 2.0, an advanced surveillance system. Meanwhile, Samsung flaunted their curved monitors giving the fans a chance to feel the difference between an ordinary monitor to their curved one. Also, according to some reports, PC users who would purchase selected Samsung curved monitors and solid state drives will get a chance to redeem Watch Dogs 2 for free. The deal is now on the run and lasts until December 31, 2016. Aside from the hardware showcase, MSI held the Sudden Death Tournament featuring live Counter Strike: Global Offensive, League of Legends, and DotA 2 battles. The final bout witnessed a face-off between Panda Esports and Xtreme Gamerz in a best-of-three showdown with the former sweeping the latter. Video games won’t be “video games” if not for monitors. Coloring the floors of SMX Convention Center were AOC Gaming monitors channeling the high-def games, adding more texture to our 2016 ESGS experience. As time goes by, the used-to-be idiot boxes are becoming smarter and smarter than ever; and AOC, won't back out developing these amazing panels. Placed at the inner area of SMX Convention Center, Redfox and Acer Predator invited the guests to try out their devices ranging from CPU to gaming peripherals with wide variety of games playable. Loot-worthy stalls were also scattered at the center of the convention center with variety of choices ranging from toys, shirts, accessories, computer peripherals, and more. Other participants went the other way and focused more on selling souvenirs and merchandise instead. Along with a live demo of PC and PS4, HyperX perfumed the event with bargains and exclusive prizes in every purchase of their goods.  Joining the merchant club were Razer, Zotac, Plantronics, Mad Catz, and Gamdias to bring a side-dish option to this fun-filled event. Reason #8: Synergy88 Digital and the Future of Filipino Game Masters

Two weeks before ESGS 2016, we attended a celebration for the successful partnership of Microsoft and Synergy88 Digital, an all-Filipino team responsible for designing some of the in-game artifacts of Gears of War 4.  Of course, by that time, we were given a hint to expect more and we knew it’s a revelation at the ESGS 2016. At the ESGS 2016, a wide space not far from Sony PlayStation’s lair presented Barangay Basketball, a mobile phone game that features native elements of the Philippine’s all-time favorite sport.  It follows the story of Max – son of a former basketball legend trying to step out of his dad’s shadow and become a basketball star on his own. Teen stars Ysabel Ortega, Patrick Sugui, and veteran actor Joey Marquez lent their voices to bring life to the game’s characters.

Are these reasons enough to see you at the Electronic Sports and Gaming Summit next year?