Ivy Bridge For All

Although not as in-your-face as with their netbooks, all of ASUS' notebooks come pre-installed with handy software features like USB Charge +, Instant On (for 2-second resume from sleep), ASUS Vibe (free streaming music and games), and ASUS Smart Logon. You also get free 3GB of online storage space care of ASUS WebStorage. If you so desire, you can download the full set of ASUS utilities and extra software from their website.

Now all of these extra features are fine and dandy, but what we really want to know is how this bronze baby and its Ivy Bridge system handles the benchmarks. Before we start though, let's have a rundown of what the system consists of. For processing, the K45VM has an Intel Core i7-3610QM chip running at 2.3GHz (which can be overclocked to past 3.0GHz via Turbo Boost). Memory comes in 4GB size of the DDR3 variety running at 1600MHz. As for graphics, it features a tandem of the integrated an Intel HD 4000 GPU and a discrete NVIDIA GeForce GT 630M with 2GB VRAM. For comparison, we pit it against another mainstream Ivy Bridge notebook, the HP Pavilion dv6, which boasts very similar specifications. 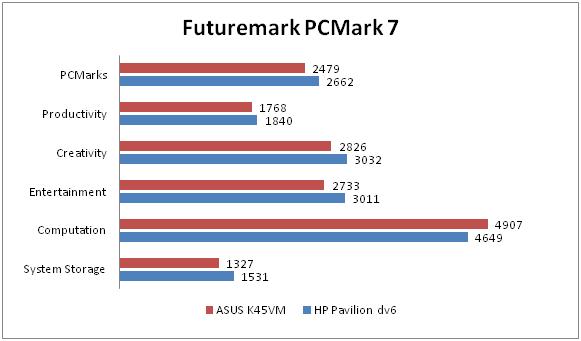 Judging from the results of the PCMark 7 benchmark, the K45VM is at a disadvantage to its HP counterpart, but only just. In all of the subtests and the overall score, the K45VM is no more than 300 points behind the Pavilion dv6, which is not that much, to be honest. It is safe to say that the ASUS successfully held its own and is at par with HP's own Ivy Bridge offering. Take note that the dv6 comes with a higher RAM count and is equipped with a faster discrete GPU.

As for battery life, our standard HD video loop test saw the K45VM go for 3 hours and 58 minutes, which is pretty much in the same ballpark as most mainstream notebooks, albeit a little over. If you really want to stretch it out, our BMark test, which had the screen at the lowest brightness and Internet connections turned off, had the notebook going for 5 hours and 16 minutes.

For a mainstream notebook, it's hard to get much better than this. Not only is the ASUS K45VM one of the first to serve up Ivy Bridge (Core i7 no less) in a middle-class system, but it also wraps the whole thing in a classy, brushed-metal package that is both easy on the eyes and easy to carry around. 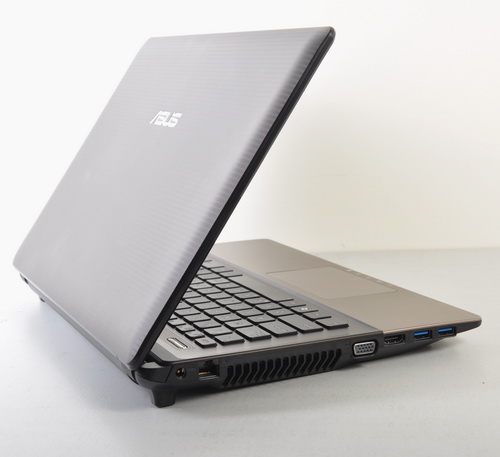 For a general-purpose mobile machine that put up some solid numbers in our benchmark tests, making it well worth considering if you're in the market for one. As of this writing, the price is yet to be announced, but judging from the previous K-Series models, it probably won't go over PhP 40,000.