Our routine test setup includes a desktop PC, the reviewed router, and a laptop to simulate a wireless home network. The desktop system takes on the role of a host machine, while the router acts as a gateway. And lastly, an external Wireless 802.11ac adapter attached to the notebook is used to fulfill the role of a wireless remote client. The router is locked down in N-only mode for the 2.4GHz band, and 802.11ac for the 5GHz band, mainly to prevent the use of varying 802.11 standards. Typically, a channel bandwidth of 40MHz is selected where applicable, while 80MHz is used for the 5GHz AC band.

We'll be using Netgear's A6200 802.11ac USB adapter for our throughput tests to reduce the number of variables involved. The Netgear A6200 USB adapter supports up to two spatial streams for a maximum data transfer rate of 867Mbps - the maximum for USB adapters currently. Hence, if your system has a more advanced wireless chipset that supports three spatial streams, you can expect even higher speeds.

To evaluate, we will be using a mix of synthetic benchmarks and real-world testing. The synthetic benchmark we are using is called LAN Speed Test. As for real-world testing, we will be measuring the routers’ speeds in transferring a 1GB zip file. We will do multiple tests at different distances to simulate use around a typical home. For the 5GHz band, we also measured how performance is affected if two clients are connected and uploading and downloading data at the same time. Here are the test distances we used and what they represent.

An important thing to note is that we will be phasing out 2.4GHz testing from our benchmarks. For one, 802.11ac is now being widely supported by most if not all mobile devices. If your device supports 802.11ac, it makes absolutely no sense to connect to the router via the slower and more congested 2.4GHz band. Speaking of congestion, our test environment currently has no less than 19 different 2.4GHz networks being broadcasted. The amount of noise and interference makes it very difficult for us to properly evaluate 2.4GHz performance. As such, we'll only be presenting performance from the 5GHz band. 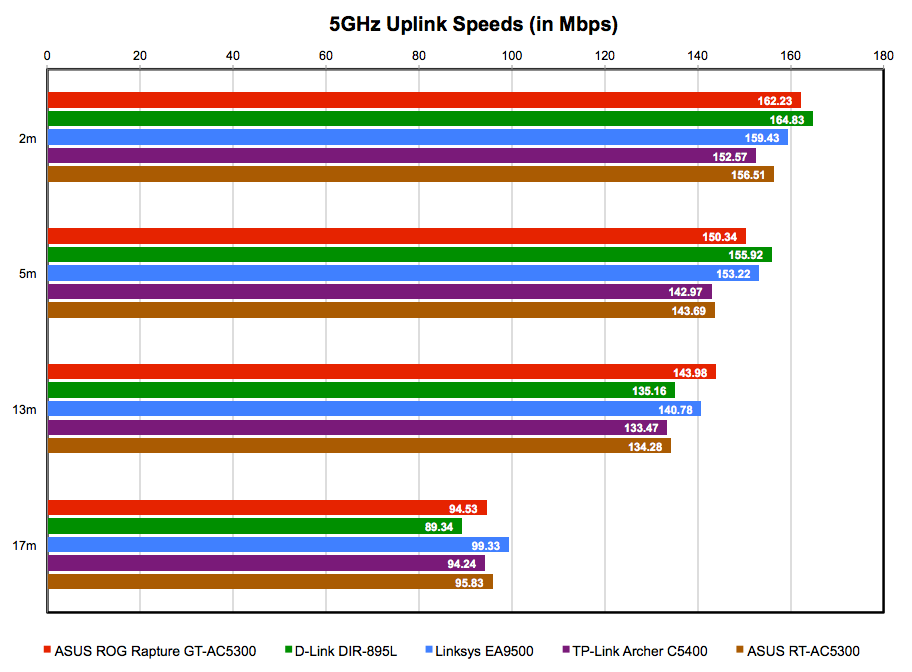 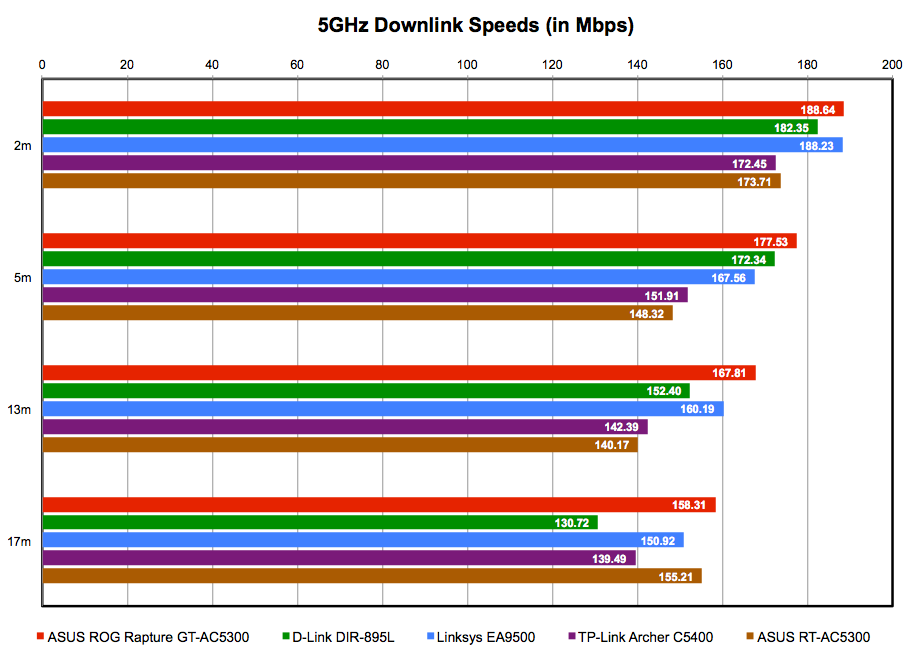 The ROG Rapture GT-AC5300’s performance in the file transfer tests were equally formidable. Its speeds were a good deal faster than the older RT-AC5300 and it was easily one of the fastest routers that we have tested. Its performance at the farther ranges of 13 and 17 meters were particularly impressive. 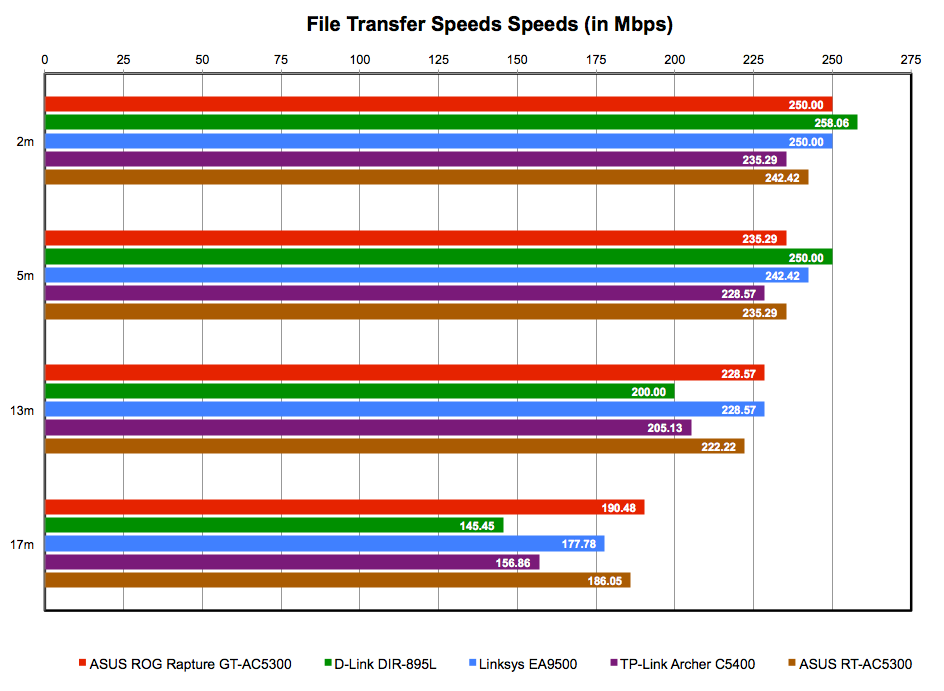 Finally, the ROG Rapture GT-AC5300 performed admirably in our performance load test where we downloaded data simultaneously using two notebooks from our host computer. We can see that it suffered very little performance penalty even with two devices connected and streaming data from the router at the same time. Unfortunately, the ROG Rapture GT-AC5300 wasn't the quickest here and lost out, albeit by only a small margin, to the D-Link DIR-895L and Linksys EA9500. 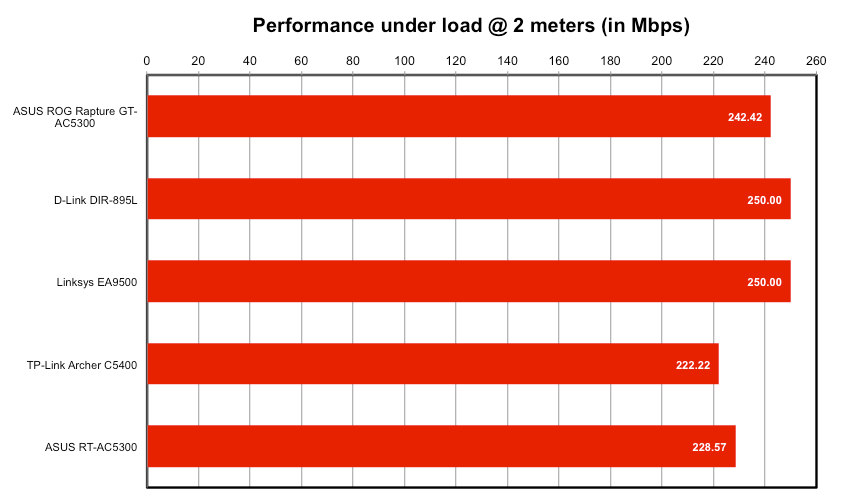 A dream router for gamers

The ASUS ROG Rapture GT-AC5300 lives up to its fearsome name by delivering outstanding results in our tests. Uplink and downlink performance was very strong in general, and its performance at farther ranges was impressive. All in all, the ROG Rapture GT-AC5300 lives up to its billing as ASUS’ new flagship router, and it is also one of the fastest routers we have ever tested.

Performance aside, the ROG Rapture GT-AC5300 also comes with loads of features and some are really quite handy. Game Profile, for example, makes it very easy to users to setup port forwarding settings for games. WiFi Radar, on the other hand, lets you monitor your Wi-Fi environment and pick the cleanest channels for your own Wi-Fi network. 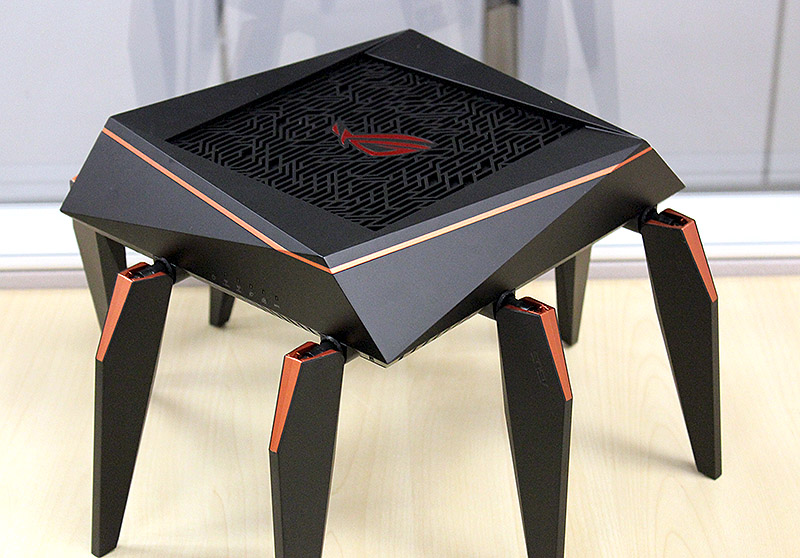 And then there’s a rich amount of connections that the ROG Rapture GT-AC5300 has. Eight Gigabit Ethernet ports should be the standard for flagship routers, but not only does the ROG Rapture GT-AC5300 have eight Gigabit Ethernet ports, it even has two dedicated ports that are optimized and have top priority over all others for gaming. And beyond that, it also has two ports that support link aggregation, allowing users to create a single super-fast 2Gbps connection that will be especially useful for hooking up to a high performance NAS system. Oh, it has two USB 3.0 ports too - handy for connecting to external storage devices.

Readers will probably be most interested to know how it compares against the Linksys EA9500. Both are great routers, but the ROG Rapture GT-AC5300 is a tad faster and offers more in terms of features. The Linksys EA9500, however, is no slouch and it has a much more refined user interface. For advanced users, our recommendation would be the ROG Rapture GT-AC5300, especially if you also have a high-end NAS system. For others who just want a fast tri-band wireless router, the Linksys EA9500 is perfect, but don't forget that there are more affordable options from the likes of D-Link and TP-Link too.