ASUS Zenbook UX21 – Could This Be Nirvana?

An Epitome Of An Ultrabook

Locally launched at a cozy event in Palawan earlier this month, the ASUS Zenbook UX21 captivates any onlooker’s senses with its elegant yet durable constitution. In its entirety, ASUS’ first foray into the Ultrabook fray is dressed up in an all-aluminium chassis, which lid cover flaunts a concentric circle-patterned design, radiating a halo-like effect. The smaller sibling of the 13.3 incher UX31, the UX21 has an 11.6-inch display. The former is powered by a 1.7GHz Intel Core i5-2557M chip, whereas the latter operates on a 1.6GHz Core i5-2467M processor.

Lifting up its razor-thin lid cover, the UX21 reveals its elegant design within. The ample, evenly-spaced chiclet-type keys are metallic and sturdy. Going well with it is a spacious touchpad that is comfy to use. The keyboard and the touchpad are both held by a metallic frame.

USB ports, along with other connectors, are concentrated on the thickest regions of the UX21’s sides. To achieve a very thin profle, this ASUS Ultrabook makes use of the reduced versions of VGA and HDMI. There is no Ethernet, but ASUS has bundled the UX21 with a USB LAN adapter. Sadly, this Ultrabook does not come with a card slot for storage expansion.

Underneath, the aluminium plate that covers the UX21’s innards are secured with ten Torx head screws. Within the UX21’s waif-like body, the Ultrabook hosts an undersized motherboard that occupies less than half of the inner chamber. The processor’s fan dispels heat through the air vent at the rear side. The fruition of the partnership between ASUS and ADATA, the UX21 employs a 128GB ADATA XM11 SSD module. This SSD integrates a SandForce 2281 controller which makes it operate at ultrafast speeds, aside from the fact that it is based on the SATA 6Gbps interface standard. The SSD controller used on the UX21 is similar to the one which Patriot has embraced for its Pyro and Wildfire SSDs. Although the XM11 module looks like a component that can be easily replaced or upgraded, the sticker notice on it clearly indicates that it shouldn’t be removed, especially if the Ultrabook is still under warranty. 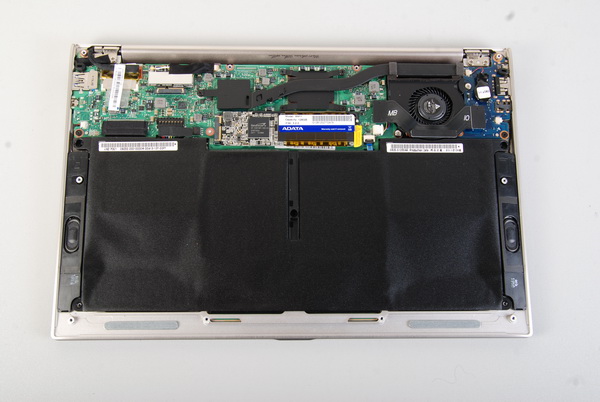 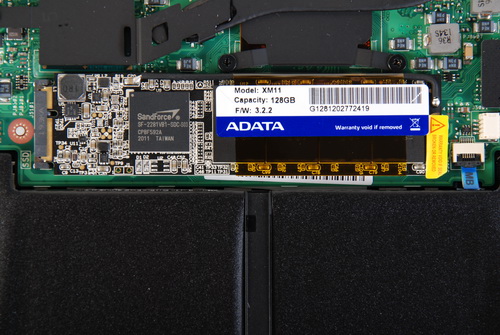 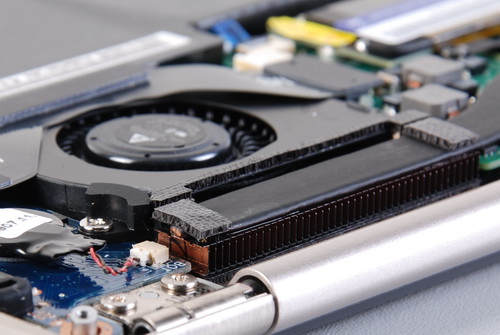 With the same Band & Olufsen’s ICEPower branding found on ASUS N series notebooks, the UX21 produces better audio quality than a regular laptop. “Bassy” musical pieces did not sound tinny, though do not expect them to be rendered as loud and profound as in the case of the N45SF, considering the UX21’s small speaker drivers and anorexic body.

Let us take a look at the software features of the UX21 on the succeeding page.