Hopes were raised among netbook fans when Acer announced that it would be including Google's Android as an alternative OS for its netbook range. No doubt, even we were stoked at the thought of being able to run Marketplace apps on a much more powerful platform (compared to a smartphone) and the chance to play with something different from your usual regular Windows. Unfortunately, these hopes were dashed when the unit, the Acer Aspire One D250, finally made its way to our labs. 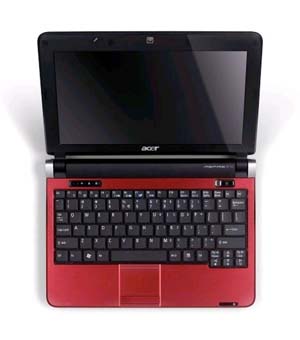 Dual booting isn't something new to the world of computing, but new to the scene is the idea of using an OS designed for smartphones as a primary boot OS. Android, as smartphone junkies know, is Google's very successful entry into the world of smartphone operating systems. As such, it's not really made for the wider and bigger screens of your normal netbook.

Acer's implementation of Android version 1.0 adapts it into an "instant on" OS now popular among notebook vendors, as it allows you to quickly surf the net and check your email in about 15 seconds.

Make no mistake, it's not designed to supplant the installed Windows 7 Starter as the primary OS. You won't have access to the Android Marketplace for new apps, nor will you have root access to install apps from your SD cards. This leaves the Android OS as bare as possible without losing the core functionality of allowing you to connect to the internet. If more functions are needed, you can boot into Windows 7 by clicking on the top left corner.

Since it already comes preloaded with Android, setting up the unit was a relatively simple affair once you boot into Windows 7. Simply click on the Acer Configuration Manager for Android and you'll be guided through a series of steps.

Once completed, the unit will then boot to Android first, and if no user input is detected in 20 seconds (configurable), the unit will boot to Windows instead. Also included in the manager are your usual update options though on further testing it didn't really update beyond version 1.0.

Generally speaking, treat this Acer netbook as a normal Windows netbook and you'll be fine. The Android capabilities, are as mentioned, good for a fast boot scenario, while one should stick to the normal Windows OS for usual productivity activities.

Acer has done nicely to add a twist to the usual drab netbook market with the addition of Android, but don't keep your hopes up for a miracle. You're probably better off holding your breath for the actual made-for-netbook OS, the Google Chrome OS, which should function better on a netbook than this Android.