Back in May, ASUS introduced in Computex Taipei 2011 its new Eee PC X101 netbook. The new member of the Eee PC line has been expected to be groundbreaking in terms of pricing as it is going to be the least expensive model that ASUS will offer. Carrying a declared worldwide price of USD 199, observers have been looking forward to seeing the X101 hit the local shores at less than PhP 10,000.

Recently, ASUS sent us the Eee PC X101H, which we deem a close relative of the X101, based on its naming convention and set of features. But unlike its colored sibling that we spotted in Computex, this one looks barer. The entirety of the netbook is mainly composed of white matte plastic, a matter which is no longer surprising for an anticipated low-priced netbook.

Thickness-wise, the X101H is slimmer than most of the other models in the Eee PC gang. The display is 10.1-inch LED-backlit LCD with a glass surface that is glossy. Likewise, the surrounding bezel is made of lustrous white plastic, in contrast to the matte surface of the netbook’s lid cover. The X101H employs a chiclet-type keyboard which generally feels firm and, if there was a flex, it is very minimal. On the other hand, using the touchpad and the click buttons was quite an onerous experience. There was a little sense of struggle when you navigate across MeeGo’s interface or browsing web pages on Chromium. Looking underneath, seen are the built-in stereo speakers and the sole removable cover reserved for the memory module. 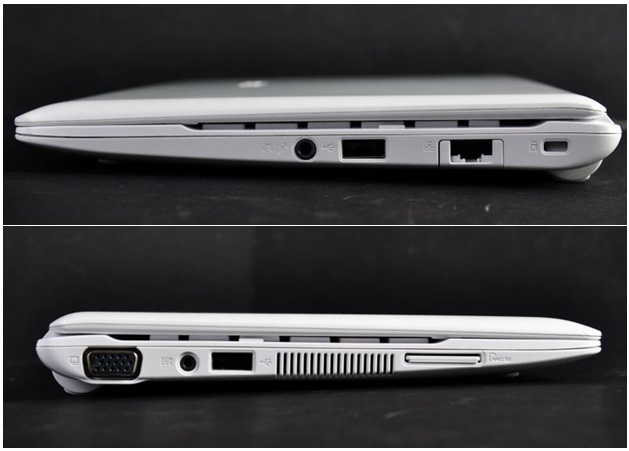 With the X101H, you’ll get a conventional set of a VGA connector, two USB 2.0 ports and a memory card slot. Some minor changes point toward the presence of a single 3.5mm audio jack, which works both as a line out and a microphone out, and the retractable Ethernet port. One of the first Eee PCs that we saw with the latter connector type was the Karim Rashid-inspired 1008P netbook back in the early part of 2010. Additionally, while checking out the connectors, we found the DC-in port quite loose but this does not affect the battery charging process in any case.

Our battery test revealed that the X101H can last up to three hours and twenty minutes. While this is considerably short in today’s netbook standards, do take note that the X101H uses only a three-cell battery. Hopefully, ASUS will offer it with an optional six-cell module, but of course, for a higher price mark. In our battery test, the netbook was left in idle mode with sleep and screensaver being disabled, its display was set to the dimmest level, and wireless connectivity options turned off.

MeeGo, in some respects, feels like a buffed-up version of ASUS ExpressGate. ASUS’ implementation of MeeGo on the X101H explicitly suggests that it is primarily meant for social networking and Internet browsing. Booting up the system, you’ll be welcomed with a console called MyZone on which you can customize and choose which apps should show up for instant access. On MyZone, you’ll instantly notice sub-consoles for Facebook and Twitter. Eight shortcuts occupy the space above MyZone, two of which are dedicated for viewing status updates and instant messaging. 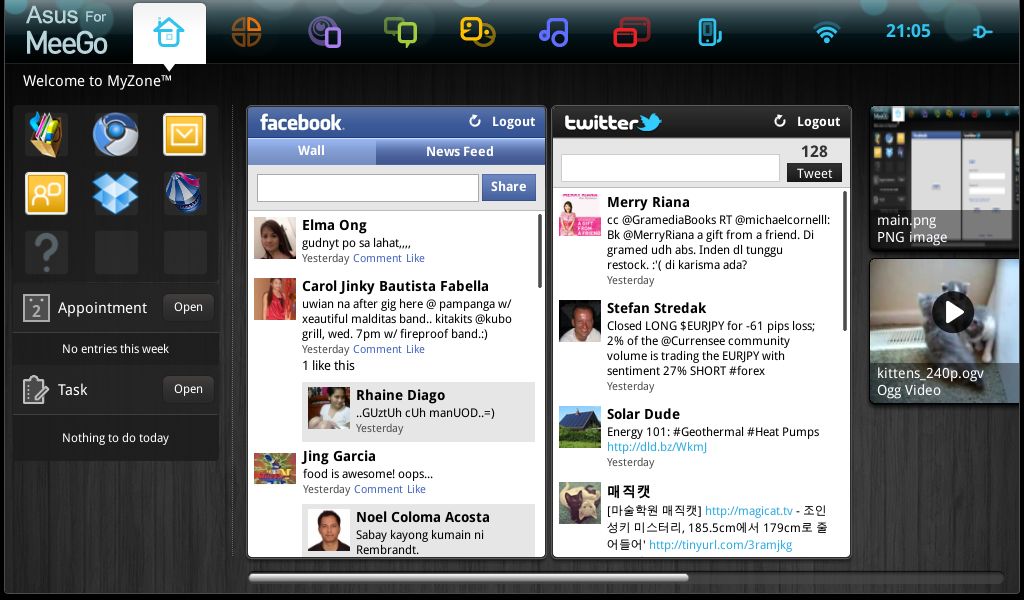 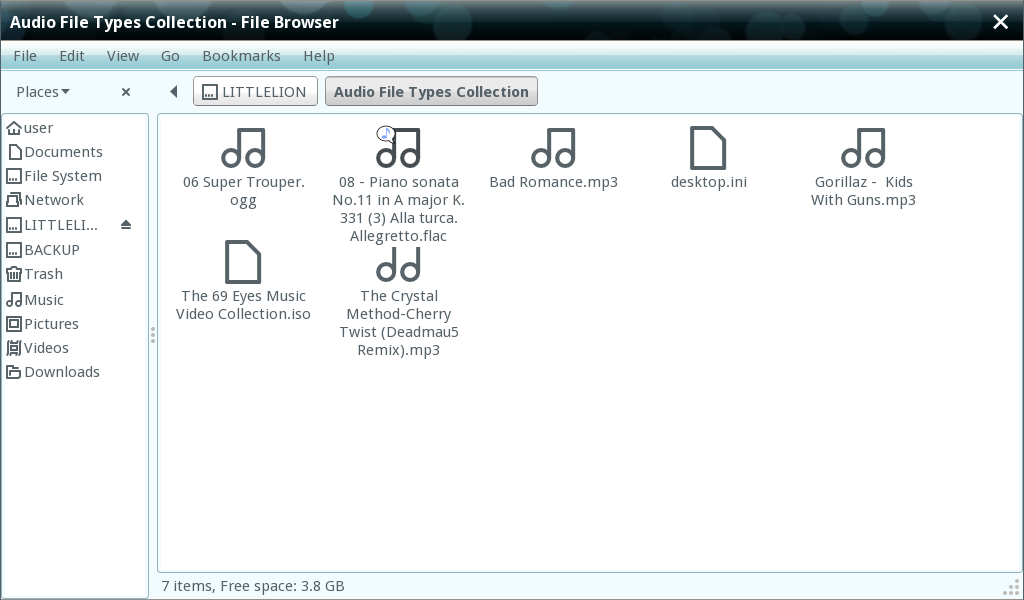 Given the small display resolution (1024 x 600), browsing on web pages using Chromium is a scrolling affair most of the time. Other notable default apps present on MeeGo include Dropbox, a cloud-based storage service, and Banshee, a media player. Although Banshee readily recognizes a variety of file formats like FLAC, JPG, MP3, OGG, OGV and PNG, a lot more are still unsupported. Common video file types such as AVI, MPG and MP4 are not viewable, unless you convert them into OGV or download the necessary codecs. We hope that ASUS will implement software tweaks on the X101H’s retail version to make it more multimedia-friendly. 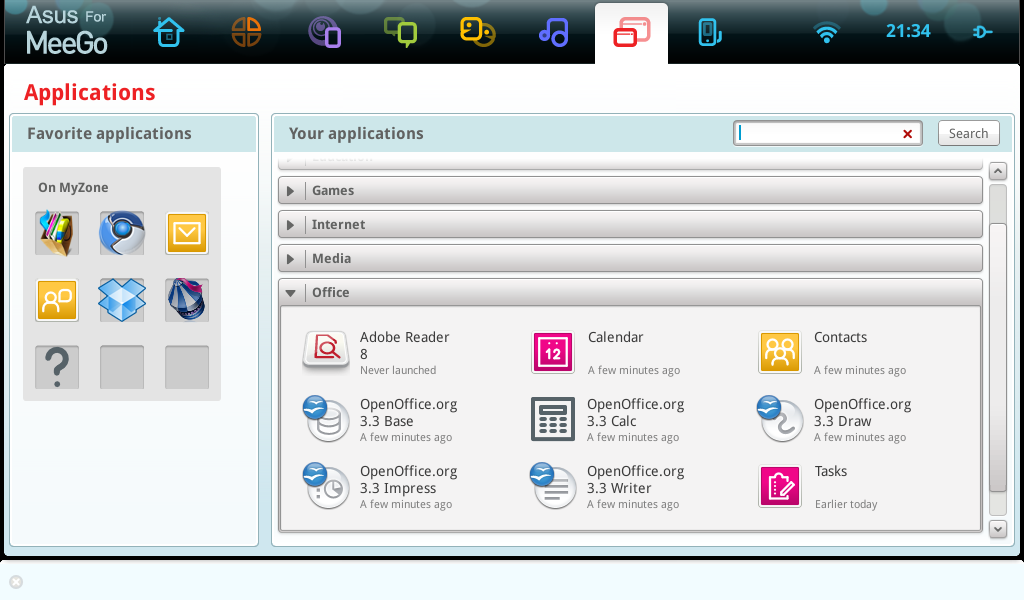 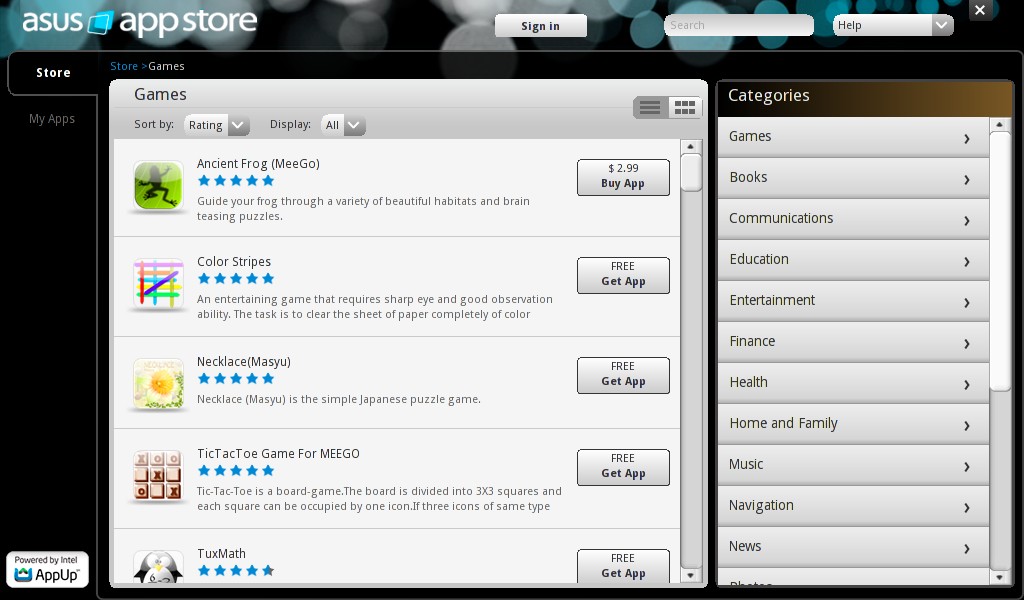 Applications are separately managed under a different console. Here, apps are divided into various categories according to their purpose. Since MeeGo is an open source environment, the X101H integrates OpenOffice.org tools for productivity as equivalent to Microsoft’s Office suite for Windows. ASUS’ app store hosts a lot of downloadable apps but these are still limited.

One of the key reasons the X101H, like its sibling the X101, is less pricey is because it runs on MeeGo. In our recent visit at NEO’s showrooms, we discovered that netbooks running on open source OS like Ubuntu are approximately PhP 4,000-cheaper than those that come with Windows. We deem that this is the same formula that ASUS has employed for the X101H. The Intel N435 CPU coupled with a 1GB DDR3 memory module is already inadequate for Windows 7, but for a MeeGo-powered device like the X101H, the combination is tolerable.

The use of MeeGo might turn out to be a turnoff for those who will encounter the OS for the very first time. It will be either due to the unfamiliarity with the OS or its straightforward simplicity, particularly for Windows-savvy users. For some reasons, we feel that consumers will buy the netbook, not because of MeeGo, but because of its hardware. Chances are, those who will purchase the netbook might eventually install Windows on it and seek a memory upgrade as well.

In the Philippines, ASUS is planning to launch the Eee PC X101H sometime in September. That said, there is no firm local price for this at present.