The Sanyo XACTI VPC-CS1 caught our attention when we first laid our eyes on its extremely slim profile and striking lipstick pink body. In fact, it feels more like a trendy flip phone than a camcorder. Despite its diminutive size, it is capable of recording the same Full HD videos at 1920 x 1080 pixels as older, high-end XACTI models and capture 3-megapixel stills (up to 8-megapixel with interpolation). Naturally, we took it for a short spin. 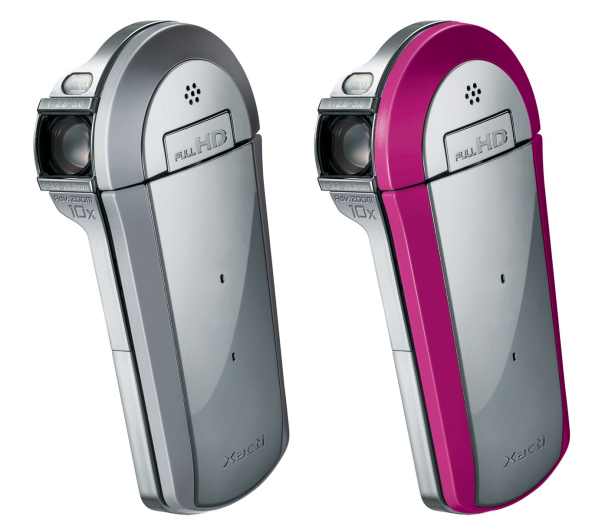 The VPC-CS1 is extremely slim and compact, and we kid you not when we say that it can be easily slipped into a regular-sized pocket. Unique as it looks, its ergonomic shape allows users to have a good grip on it while on the move. While camcorders are traditionally clothed in dull black or dark colors, the VPC-CS1goes in the opposite direction with its impossibly eye-catching pink and silver body; it is chic, fashionable and obviously targeted towards the fairer sex.

Menu controls are placed on the right next to the 2.7-inch screen, easily seen when you flip it open. Navigation is simple and self-explanatory - if you have used a compact camera before, you will find your way around in no time. The only real complaint we have here is that the buttons are a tat too tiny and flat for our liking, often leading to multiple, exasperating button presses.

On the other hand, shooting controls have been lined up at the top along the rounded edges, in the following order from closest to farthest: Video Recording, Zoom in/Zoom out, and Still Photo Capture. While the first two buttons have been placed strategically for easy shooting, we can't exactly say the same for the last one. Taking still photos requires a long press with more force, and the dedicated button makes it hard for us to shoot without any unnecessary hand movement. Notably, the power-on button has been separated from the rest of the control buttons, and is strangely placed near the hinge of the device. We found it rather inconvenient to press especially if one was on-the-go.

The VPC-CS1 also comes with a USB/AV port, a HDMI port and SDXC memory card slot, all neatly concealed in its compact body.

The device comes with both digital video and image stabilizer options. However, we didn't see a marked difference with these options enabled. You can even do simple edits on the device - for videos, you can cut or join clips; for photos, you have the options of reducing the dreaded red-eye effect and adjusting the contrast level. There are more advanced options like Scene Select, Focus Mode, Focus, Exposure Measure, and White Balance, but Sanyo has also provided the option to switch to a more spartan menu with just the basic controls for those who prefer to keep it simple.

We were pleasantly surprised by the quality of the video - the auto-focus works fast all across the three existing modes: Manual Focus, Super Macro and Auto. The videos appeared to be crisp and clear, and you can judge the quality for yourself here. However, its photo-taking abilities was less impressive. A couple of complaints here: the LED flash does not throw far enough, and photos exhibit low noise control under low lighting.

While we feel that the Sanyo Full-HD Dual Camera Xacti VPC-CS1 makes for a great travel camcorder, we doubt it will live up to the expectations of an average photography buff. This is understandable, since the primary function here is to record videos, and at this, it does well enough while offering portability. Photos are decidedly average, noisy and operates rather badly indoors in low lighting. However, if you are looking for a casual camera that can easily capture both photos and videos, the VPC-CS1 might be a decent choice.