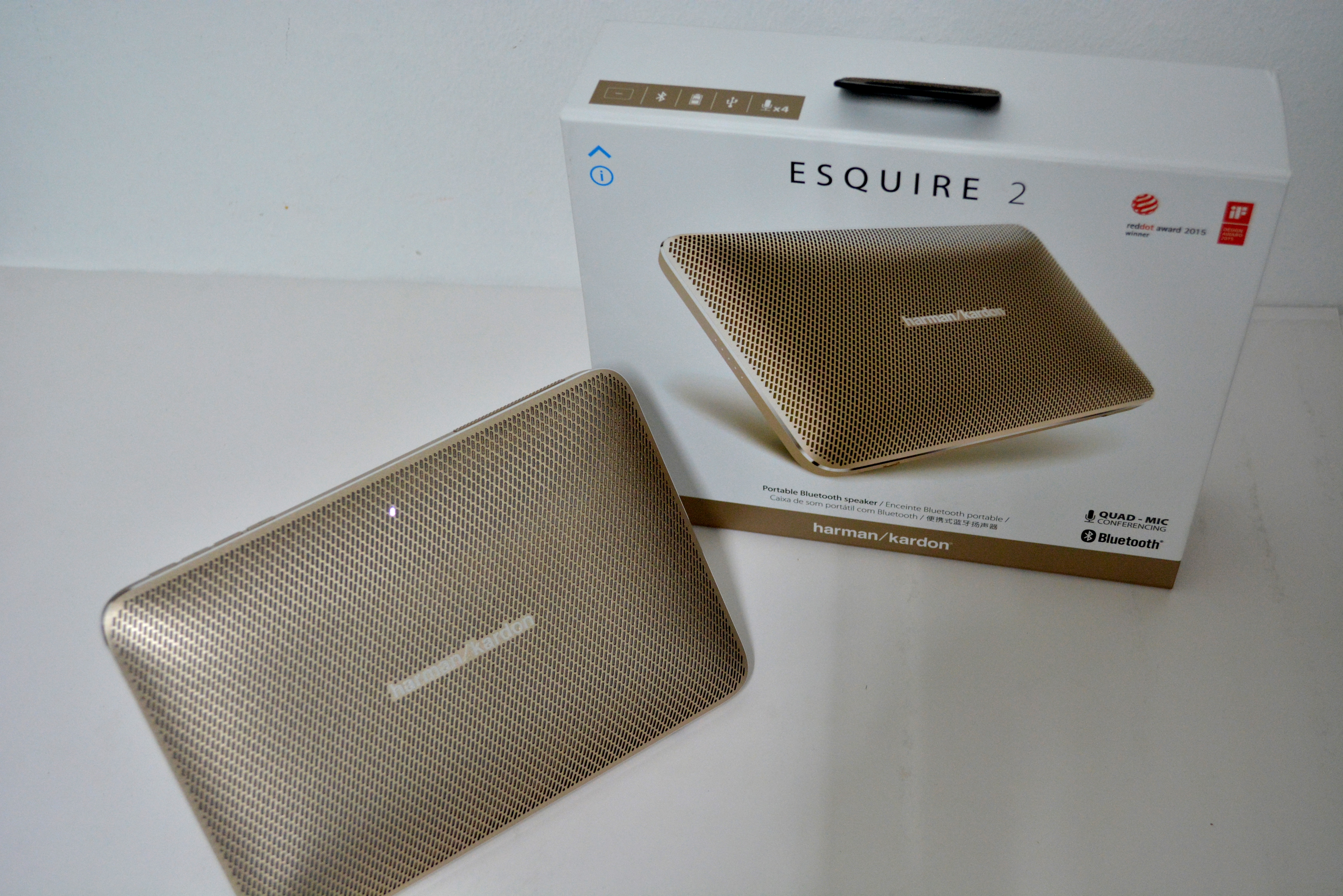 Christmas and New Year have just passed by and our music playlists have played a big role during these occasions. Christmas songs brighten the holiday vibe, but in order to enjoy them seamlessly, one must have a speaker set that can easily connect to a smart device and is portable. One of these speakers is the sleek Harman Kardon Esquire 2 which speaks elegance from its packaging to the point when it is pulled out of the box.

The Esquire 2 arrives in a handy, purse-like exterior that is mostly made of aluminum. It's face is covered by a grille carrying a silver ‘harman/kardon’ branding in the middle. 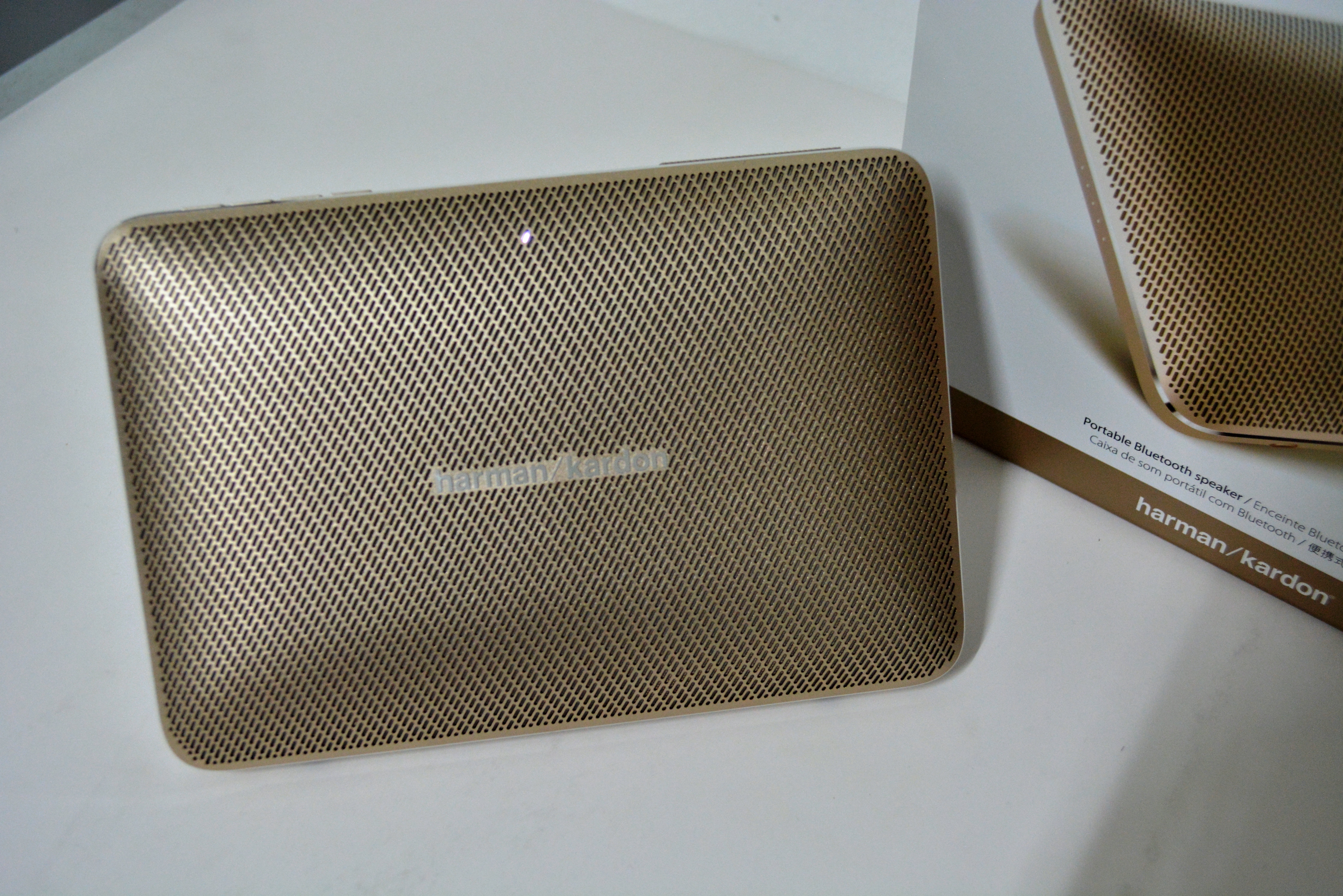 Sitting on the left side are five LED indicators for battery level. A single blinking LED light indicates low battery level, while a set of five white lit LEDs shows otherwise. To its right are the input and output port: the USB port for direct playback from an external storage device such as a USB flash drive or an external hard drive, 3.5mm jack for audio output, and a micro-USB port for battery charging. 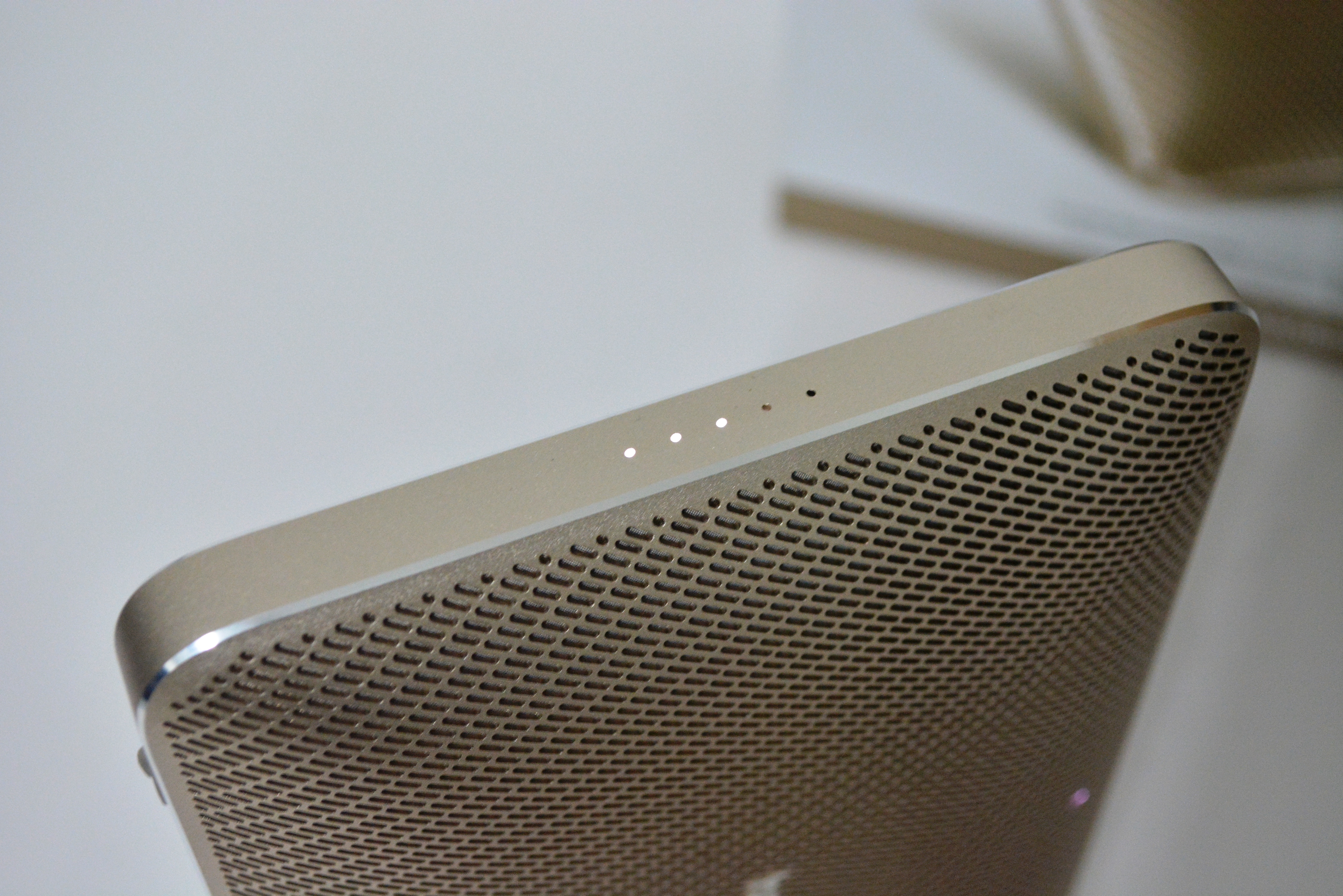 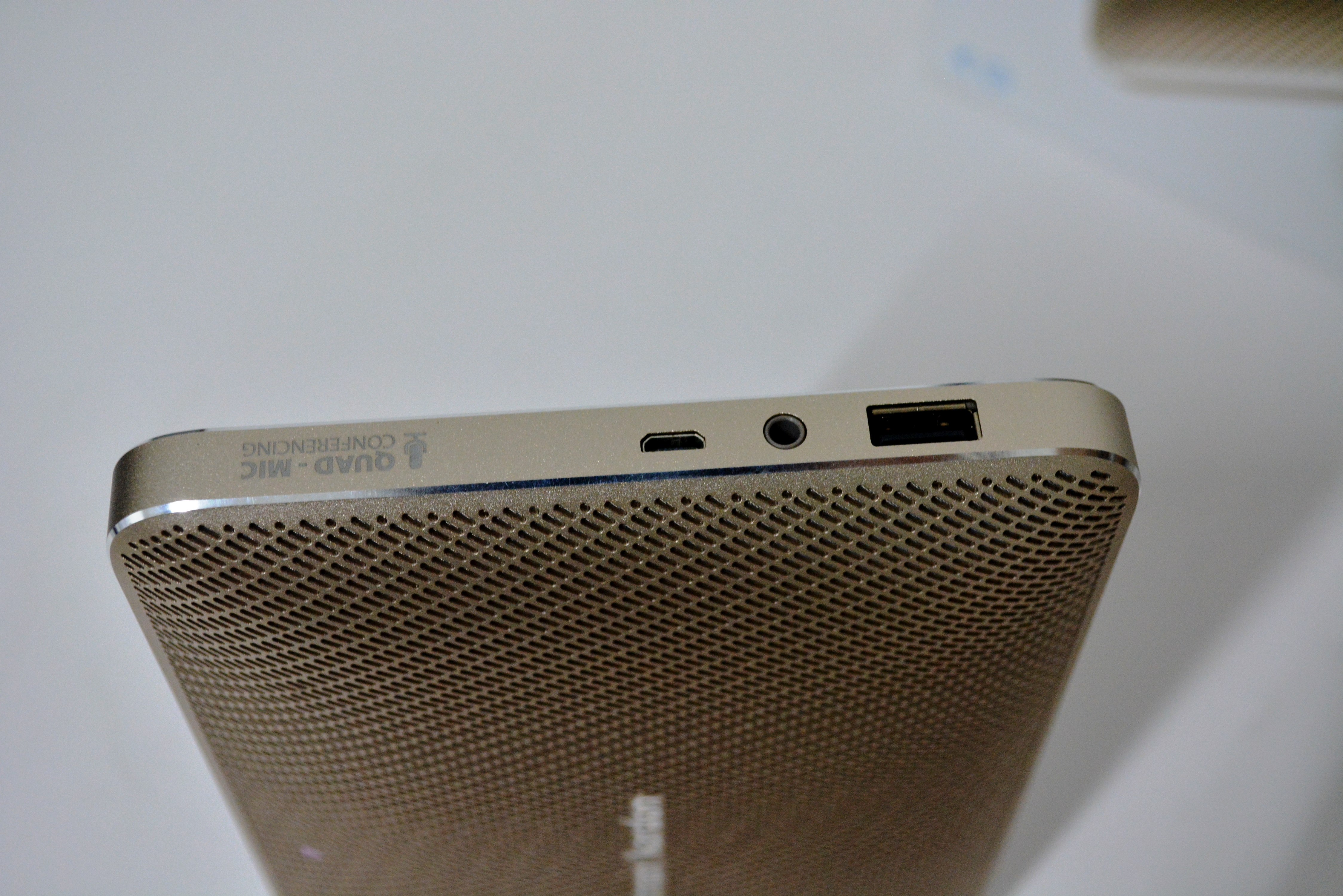 Residing on the top are all the buttons of the Esquire 2. From left to right on the picture shown below are the power button, Bluetooth switch, answer key, and mute button. Plus, there is a textured long bar for volume control. The bottom features two rubber feet to help the device stand on its place. 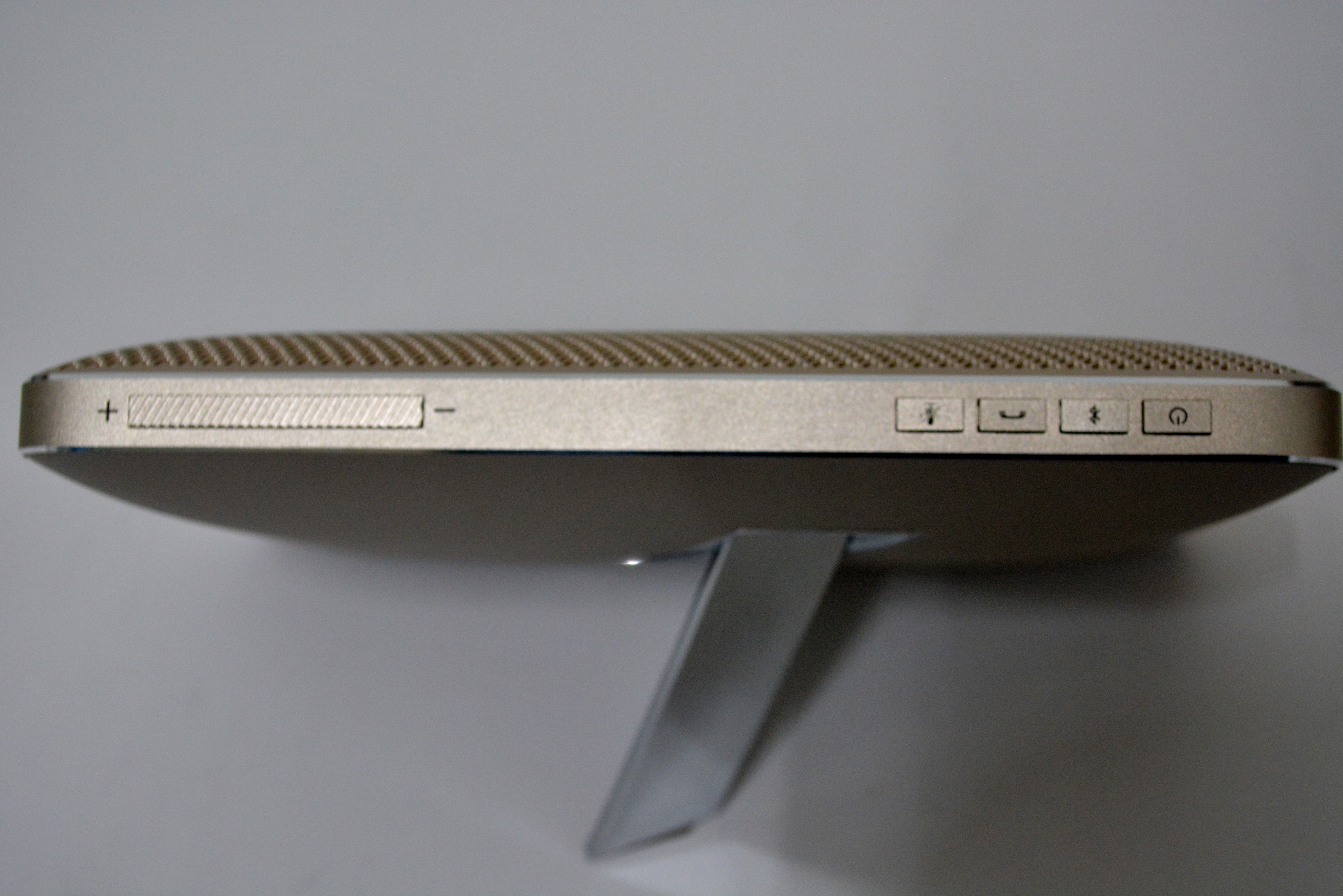 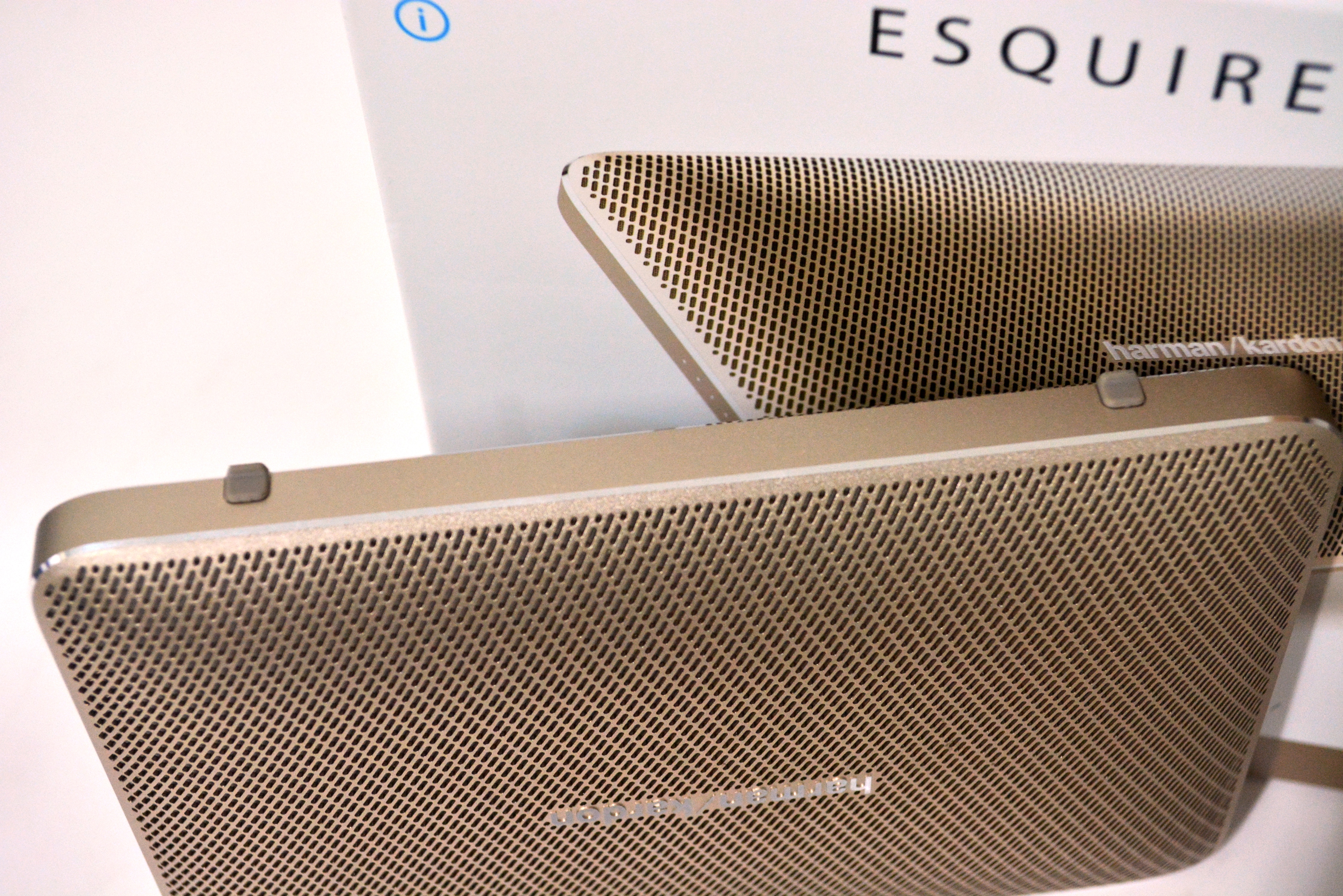 The back of the Esquire 2 shows a leathery finish and a shiny chrome flip-stand. The tip of the stand has a rubber strip similar to the feet of the device placed on the bottom to prevent it from slipping. Overall, the Esquire 2 looks like a picture frame placed on a table. 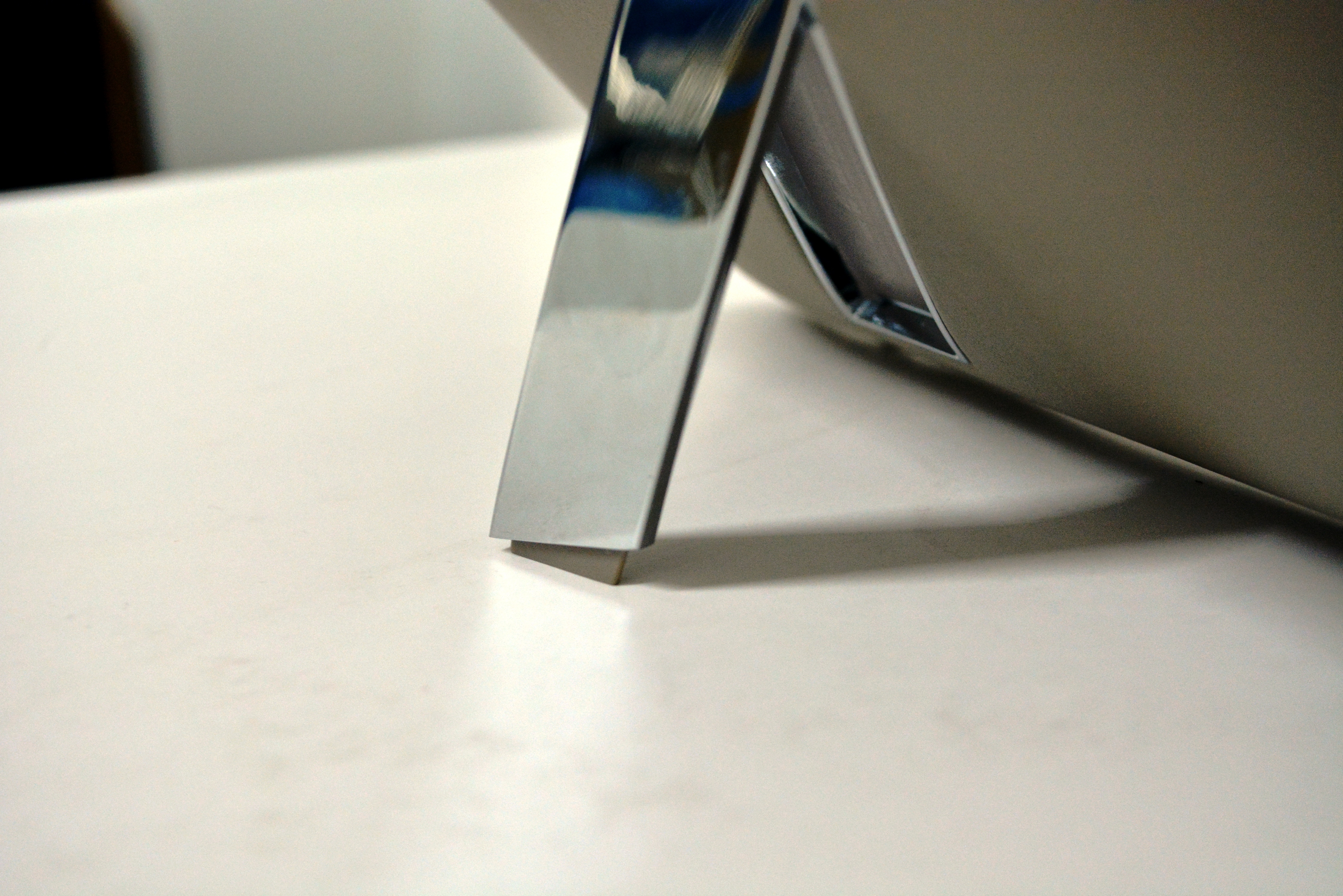 The Esquire 2 is a portable speaker that uses Bluetooth 4.1 standard for wireless connectivity to pair with a compatible music source. During our trial, we didn’t encounter any problems with connecting our smartphones. We just had to enable our Bluetooth and pair it with the Esquire 2. The device can manage up to two connections and take turns in control.

Another ‘plus’ feature of the Esquire 2 is its quad-mic configuration or its four microphones integrated into the speaker. This setup allows for making conference calls and better capture sound during hands-free calling. Our team tried this feature and there were no any trouble on both sides of the call in the couple of times we used it. 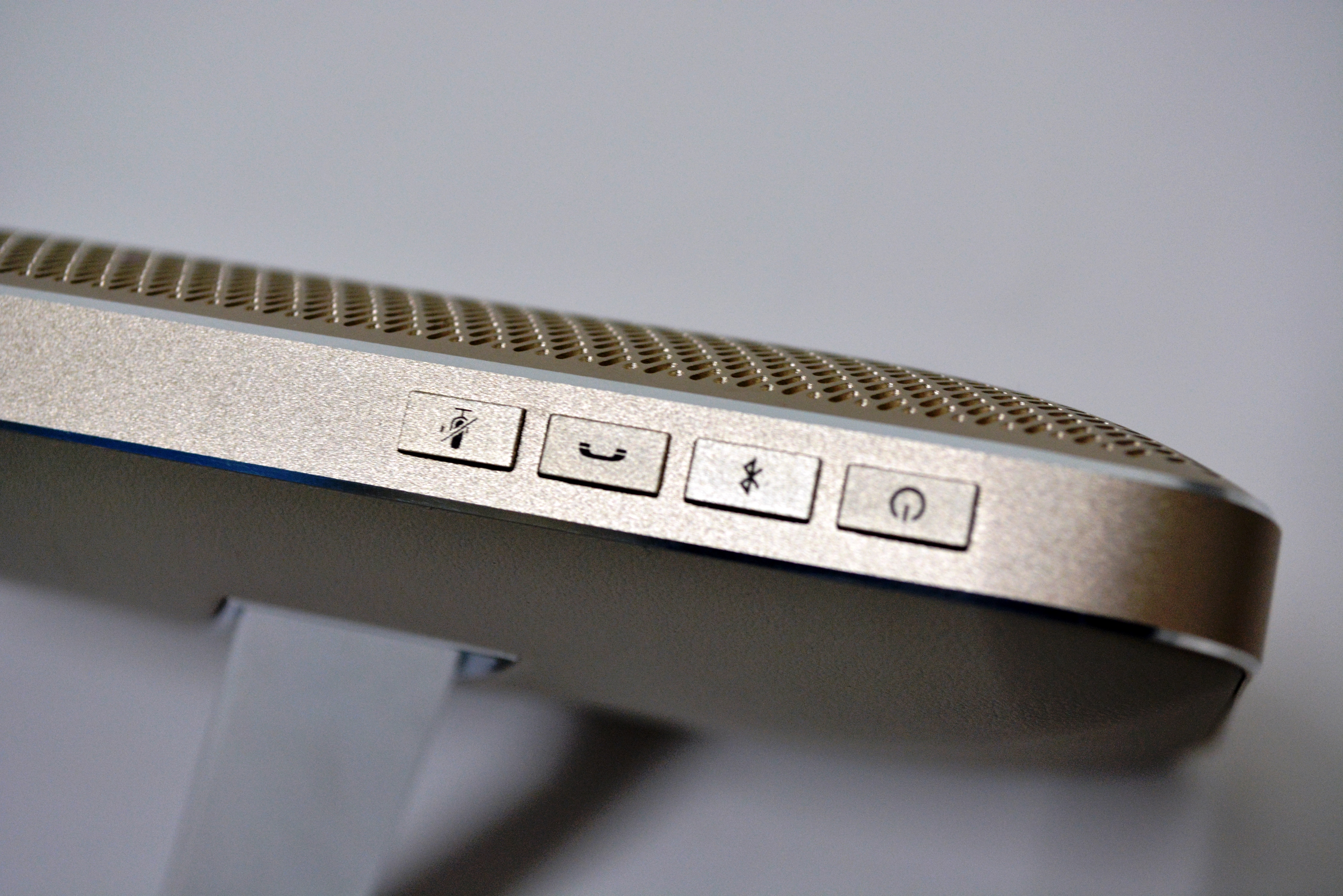 We tried the Esquire 2 right away when we received the unit in our office. With almost a week of using it, our we were amazed that it did not give us any disappointing performance. From lows to mids to highs, the speaker was able to deliver satisfactorily. The vocals were clear that even the small details of the song from the instrumentals were audible.

Unfortunately, the speaker wasn’t able to give a gratifying depth when it comes to bass. Taking into account the size of the speaker, the Esquire 2 gave a satisfying sound quality. The Esquire 2 was able to fill a medium-sized room without any sound distortion even when we cranked it up to the highest volume. 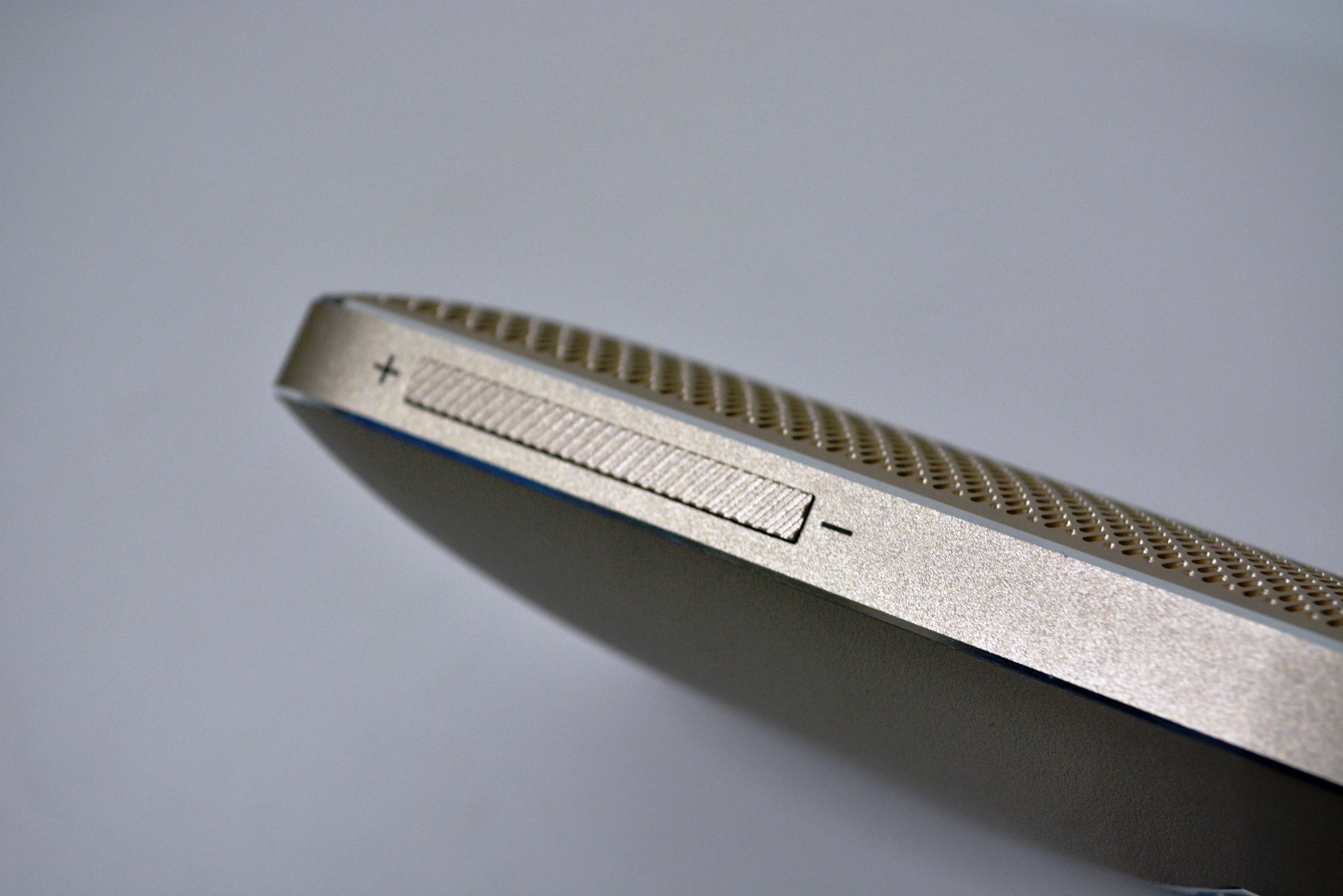 The Esquire 2 comes with a 3200mAh lithium polymer battery inside. Putting to the test its stamina, we made the fully-charged Esquire 2 continuously play music at the maximum level until the battery drained. The Esquire 2 was able to stay on up to 4.5 hours. Charging time took about 3.5 hours using its bundled charger upon purchase.

If you are looking for a portable Bluetooth speaker that is elegant and easy to carry around, then the Esquire 2 from Harman Kardon should be on your list. However, we deem that the capacity of its built-in battery need improvement. In the Philippines, the Harman Kardon Esquire 2 has a launch price of PhP 9,999. 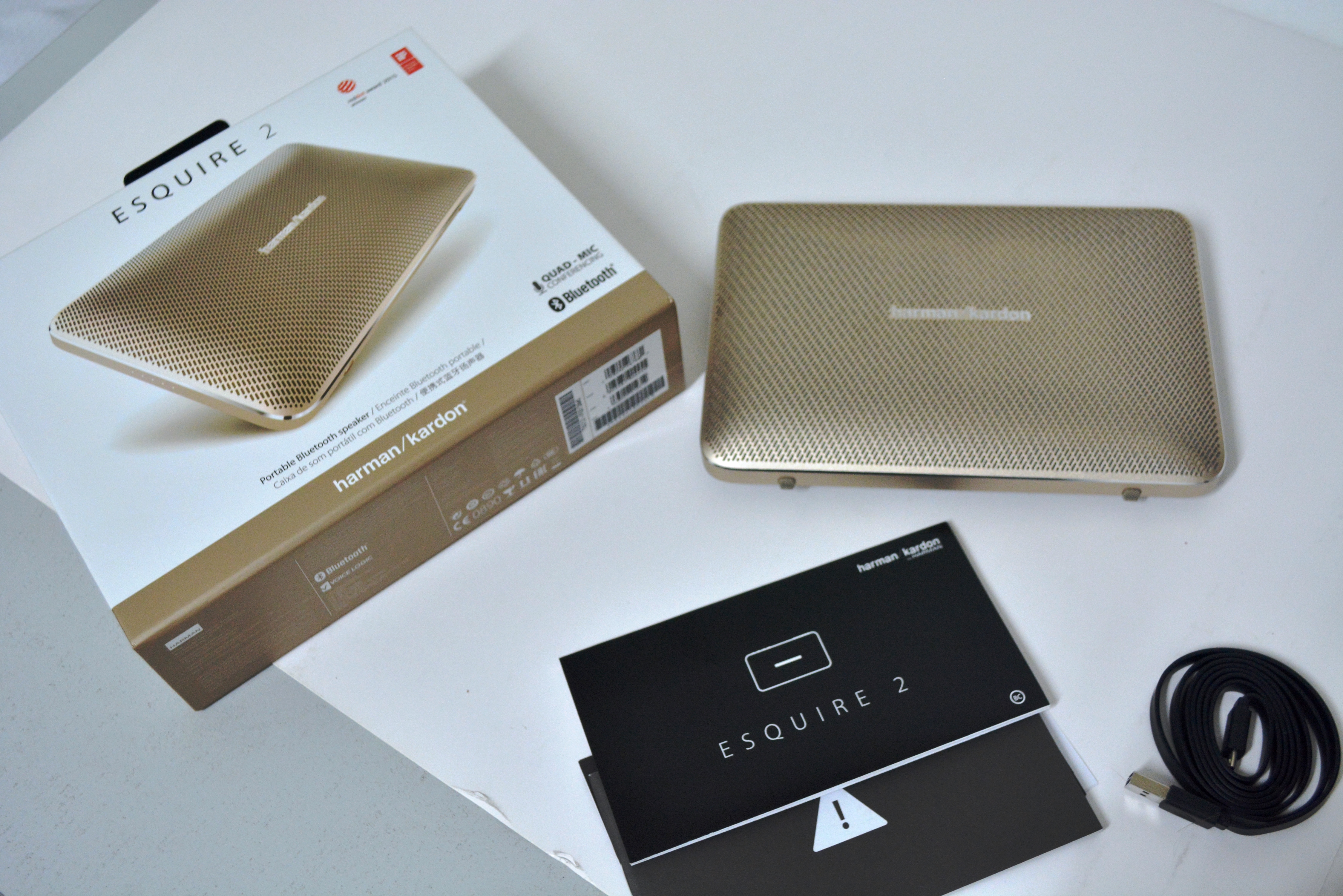 You can buy the Harman Kardon Esquire 2 at the following stores: