After a slew of Ultrabooks suspiciously resembling Apple’s MacBook Air, it’s refreshing to see one that looks a bit different, although... there is a certain similarity to another Apple product: 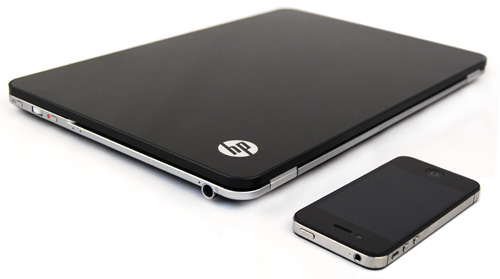 The HP Envy 14 Spectre generated lots of buzz at CES 2012, and for good reasons: it’s one of the first 14-inch Ultrabooks, it’s absolutely covered in current, flavor-of-the-month material, Corning’s damage-resistant Gorilla Glass, it incorporates an NFC receiver, and of course, it's incredibly sexy.

With a hefty S$1999 price tag, the Spectre is definitely in the ‘premium’ category. Most of its inflated price goes towards its design and engineering as its specs are actually quite ho-hum: Intel Core i5-2467M (1.6GHz) dual-core processor, integrated Intel HD 3000 graphics, and a 128GB SSD (exactly the same config as HP's other Ultrabook, the Folio 13, which is S$600 cheaper).

So what do you get for your money? Let’s start with its most striking feature, the Corning Gorilla Glass. HP has wrapped the Spectre in the stuff, using it on the lid, the screen and even the wrist rest area. While you’ll probably have to clean smudges off the lid every couple of minutes (if fingerprints bother you, this is not the notebook for you), the glossy, black glass gives the Spectre a clean, futuristic appearance and, contrary to common sense, the glass swaddling the Spectre actually makes it stronger, not more fragile.

Corning’s Gorilla glass has become really popular with tech gadgets recently for its its strength and damage resistance without the bulk and thickness associated with traditional glass if it were to withstand the forces that the Gorilla glass stands up against. To test it out we tried a bit of random vandalism with a set of keys and a medium sized screwdriver, but despite our best efforts, the Spectre remained remarkably scratch-free. We’re not saying you should throw rocks at the screen, but it definitely holds up better than other notebooks. 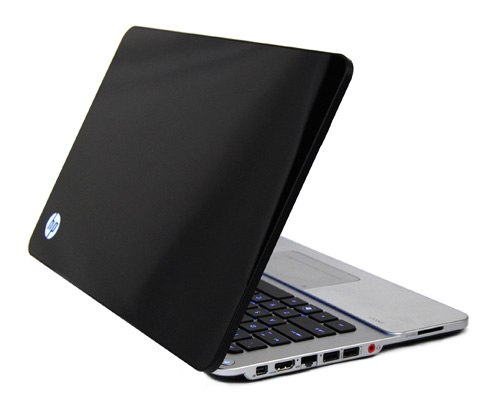