When HTC launched the J Butterfly in Japan last October, the rest of the world watched with envious eyes as the Japanese laid their hands on the new HTC flagship phone. As a Japan-specific model, it initally seemed that the J Butterfly would not make it anywhere else beyond Japan's shores.

Days later, leaked images of a US variant of the J Butterfly were posted online which sparked off speculation that the J Butterfly (or its variants) would eventually make it to major markets around the world. On 7th December 2012, HTC quietly launched the international variant, the Butterfly for the global market. Unlike its US and Japanese counterparts, the Butterfly does not come with 4G LTE capability. On the other hand, the Butterfly has a microSD card slot, which is absent on the other two variants.

The J Butterfly has proven to be a massive hit among the Japanese, and HTC had to ramp up shipments to the country to meet the strong demand. As a result, our enthusiasm for the Butterfly grew and after a seemingly "long" wait, the HTC Butterfly finally made it to our sunny shores.

We bet a lot of questions are on your mind. Is the HTC Butterfly a better phone than the One X+? How does it fare against the Samsung Galaxy S III? Should you wait for the rest of the 5-inch phones that were announced at CES 2013 to launch before making a decision? Well, you will find out shortly in our review. Before you start, here's a quick look at the specs of the HTC Butterfly: -

The Butterfly takes on a different design language with a plastic chassis instead of the signature polycarbonate unibody construction found in the One X/XL/X+. For its choice of material, we feel that polycarbonate could have been a better choice given its fine balance of durability, looks and weight. Nonetheless, the Butterfly is still a very well-built device.

It is obvious that some thorough consideration had gone into the design of the Butterfly so as to make it as ergonomic as possible. For example, the Butterfly inherits the unique design trait of its Windows Phone 8 (WP8) siblings, the WP8X and WP8S - a slightly tapered back. Coupled with a soft plastic feel, the contoured sides make the Butterfly feel extremely comfortable in our hands.

Another distinct design element is the metallic piece at the top centre of the device. While it serves no functional purpose, we feel that it is deliberately integrated into the design so as to differentiate the Butterfly from the sea of black or white slab-style devices. Both sides of the Butterfly sport perforated metal strips, which we initially mistook for the phone's speakers. Later, we found out that the perforated metal strips are inspired from the design of sports cars. Again, they enhance the overall aesthetics of the Butterfly, and nothing else.

If you are observant enough, you might have noticed something to the left of the camera lens on the back. HTC has added a second notification light (the first is found on the far right of speaker grille at the front) on the back of the Butterfly. Whether the Butterfly is placed face down or face up, you will still be alerted of any notifications.

While we're generally pleased with the refreshed design of the Butterfly, it is unfortunate that HTC ignored one crucial usability aspect of a big screen phone. As mentioned in our hands on with the Xperia Z, we appreciate the fact that Sony has placed the Power button on the right side of the device. This makes it very convenient to access the button as you don't need to stretch your finger or hand to reach the top.

For the Butterfly, the situation is made worse as the Power button is located at the top centre of the device. While it is still acceptable on 4.7-inch devices, it is not user friendly anymore once it hits the 5-inch display size. ASUS, LG and Samsung have figured this out on the PadFone2,  the Nexus 4, Galaxy S III, and the Galaxy Note II, and HTC needs to take note of this.

In case you are wondering why the micro-USB port, microSD and micro-SIM card slots are all covered, the Butterfly is rated for IPX-5 waterproof standard. The digit after the "IPX" refers to the degree of protection. A higher number means the device is better protected from water. According the link, the Butterfly is protected against low pressure water stream from any angle.

The HTC Butterfly is more than capable of holding its own when compared to the Sony Xperia Z in terms of design, feel and handling. Having handled both devices, the Butterfly reminds us of the iPhone 5 as it sports a longer frame, whereas the Xperia Z feels and looks wider. Usability wise, we had no problems slipping the Butterfly into our jeans pocket. It doesn't feel as overwhelming as the Samsung Galaxy Note II, but users with smaller hands may still find the Butterfly a tad challenging to use. 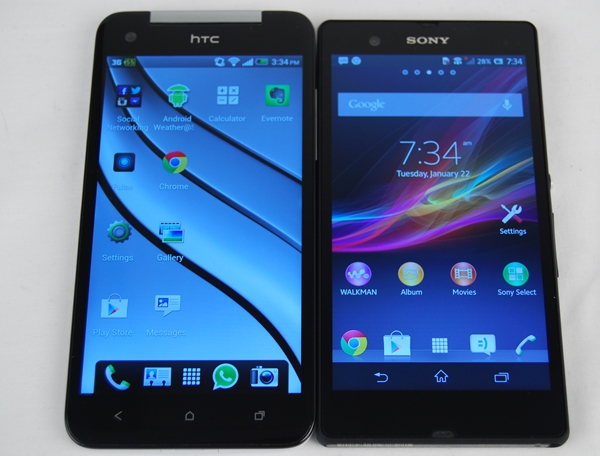 The Butterfly runs on Android 4.1.1 Jelly Bean and Sense 4+, which is a similar software package that we've seen on the One X+. The One X and One XL devices should have received the over-the-air update by now to be on the same page as the Butterfly.

Most of the features in Sense 4+ have been discussed in our review of the One X+. Here's a quick recap of the new features in Android 4.1 and Sense 4+:

There is an exclusive widget that is only found on the Butterfly - the App & Shortcut. According to a local HTC spokesperson, the widget is not a standard feature of Sense 4+ and just an element of the user interface on the Butterfly.

As the name suggests, the widget allows you to place four apps or shortcuts on a home screen panel for quicker access. You can fit up to four of this widget on a home screen. Unfortunately, you cannot resize or change its orientation.