As most avid readers of our site would known, the tidal wave of the Windows Phone 7 (WP7) OS has arrived, kicking off first with LG Optimus 7, and now the new HTC HD7 smartphone. HTC has had its fair share of Microsoft Window Mobile phones in its lineup from the HTC HD2, which garnered much attention for its large 4.3-inch screen, to the HTC Touch Diamond2. Unsurprisingly, HTC is one of the forerunners in a close partnership with Microsoft's Windows Mobile 7, and at the recent Microsoft Windows Phone launch on the 12th of October, they unveiled a total of three HTC WP7 smartphones including the subject of our review, the flagship HTC HD7.

For those still foreign to the Windows Phone 7 OS, here's a short recap on what's the user experience about. Users familiar with Windows Mobile 6.5 will find themselves working with a totally new interface comprising of live tiles, hubs and apps. While the former's primary area of concentration is on productivity, Windows Phone 7 has rather aggressively branched out into social aspects of mobile user experience, namely its close integration with Facebook and Xbox Live. 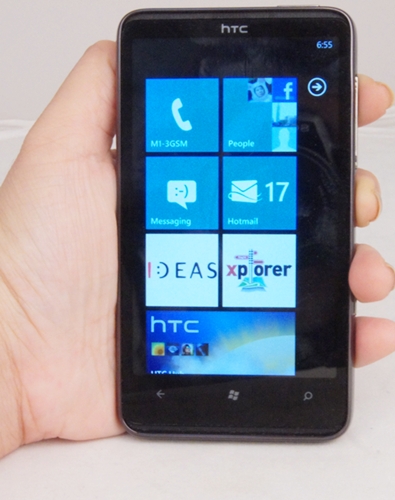 The HTC HD7 sports a huge 4.3-inch screen - the biggest one on the WP7 bandwagon so far - that sits nicely beside the existing family of 4.3-inch touch screen behemoths like the HTC HD2 and HTC Desire HD. That's not the only thing striking about the phone; the slim HD7 is built rather fashionably in the same vein as other HTC devices. The downside here is that the huge screen and its glossy sides are fingerprint magnets. The large screen size also means that the phone has rather large dimensions that it might not fit well in your pocket. On the upside, the phone feels sturdy with a rather heavy body.

Like the LG Optimus 7, the phone adheres to Microsoft's design guideline, such as sporting a 480 x 800 pixels resolution display as well as the three essential buttons on the face of the phone among others. However, the buttons aren't the physical type, but are touch-sensitive. While they are extremely responsive (even to light taps), they sometimes get in the way of navigation due to their proximity to the screen. The phone's other physical buttons don't fare well either. For example, the power button on the top is a thin and flat strip that is a nightmare to press. The experience is made worse since you have to constantly interact with it to unlock or lock your screen. The volume and camera buttons on the right profile are also equally flat and thin, but they are decidedly easier to press because of their more favorable positions.

We have encountered some bad experience with previous HTC phones with regards to removing battery covers, but we managed to easily snap it off the HD7. The bad thing is that the cover is made out of thin plastic and feels fragile, so do exercise caution and exert less force when opening it. 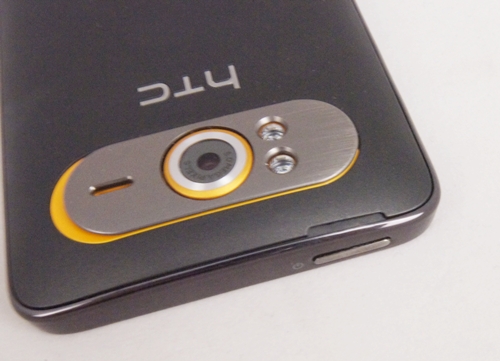 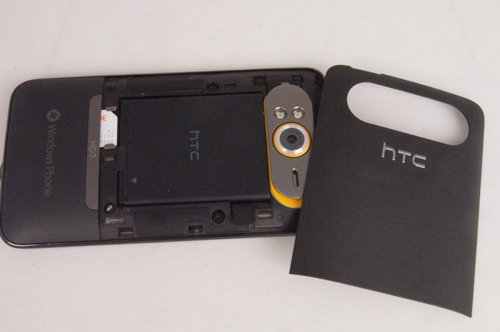 The obvious unique feature of the HD7 is that it comes with an aluminum kickstand that rests on top of the camera and dual LED flashes. The kickstand does not protect the lens, but works as a stand that can easily be propped for viewing photos or videos (think of it as a miniature photo frame). It feels sturdy and can be easily flipped out or snapped back without any cause for concern. 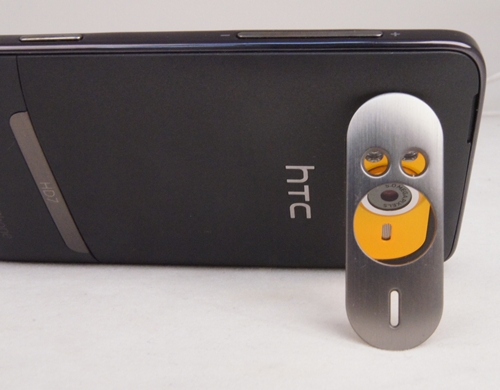