HTC One - The Chosen One

With respect to hardware, the HTC One has crammed the best technology currently available. It features a Qualcomm Snapdragon 600 APQ8064T chipset which pairs a 1.7GHz quad-core CPU with an Adreno 320 GPU along with 2GB of RAM. This piece of silicon is one of the best to be found on the market today (with the Qualcomm Snapdragon 800 only expected to be featured in commercial products from mid-2013) a fact that is supported by its usage in the upcoming LG Optimus G Pro and the ASUS PadFone Infinity. Needless to say, you can expect a lot of upcoming high-end smartphones to be based on the same chip.

To find out how the HTC One stands amongst its peers, we used the Quadrant test as a benchmark. The benchmark evaluates CPU, memory, I/O and 3D graphics of Android devices. In this comparison, we pit the device against the iPhone 5, HTC Butterfly, Sony Xperia Z and the LG Optimus G. 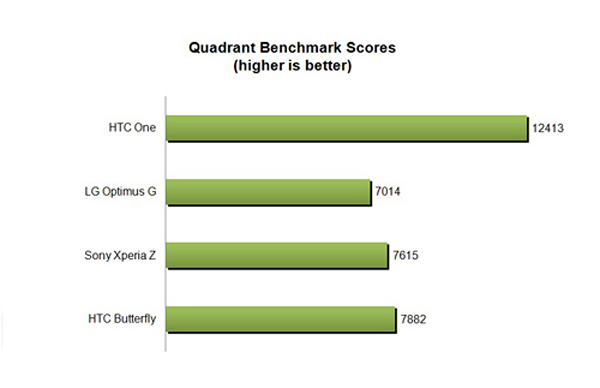 We expected the HTC One to perform well, but not this well. The HTC One’s Quadrant score of 12,413 dwarfs every mark set by the phones that came before it by a fair margin. When using the HTC One we were impressed with the snappy response and almost non-existent loading times. The processing prowess of the HTC One was exemplified by the quick operations on Google Chrome browser, which is notorious for being laggy and jerky on most phones. The Quadrant score only quantifies what we had already experienced with our usage, that the HTC One is a blazing fast beast.

When dealing with quad-core processors, the manner of utilization for each core is important. For low processing requirement tasks, a number of cores may actually be switched off completely to conserve energy. It seems HTC has configured the One’s core management system so as to deliver the best performance possible, but does it actually deliver that? The next section on battery life might shed some light on this. 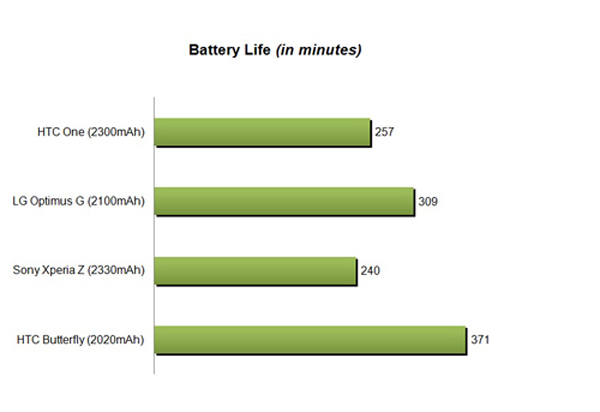 The HTC One’s battery lasted a grand total of 4 hours and 17 minutes. This is on the lower side, just like the 5-inch Sony Xperia Z. HTC’s 5-inch contender, the Butterfly, actually managed to go beyond 6 hours which brings the new HTC One’s battery performance into sharp relief. More damning is the fact that the HTC Butterfly only comes with a 2020mAh battery while the HTC One’s battery has a 2300mAh capacity. However it must be noted as well that the HTC One comes with a speedier 1.7GHz quad-core processor that probably saps more power. As seen in the previous section, the performance of the HTC One is off the charts and it is our guess that extra juice is required to meet the higher performance levels. Another aspect to consider are the background services running, such as the HTC BlinkFeed that's bound to sap up some resources to dent its battery stamina.

Our battery tests are quite strenuous and are used to help us establish a base line for comparison between the various smartphone offerings on the market. In actual usage scenario, the HTC One fares decently. The phone was able to easily last through our regular weekday schedule of calls, email, web-surfing and social media usage. However, if you throw in photography usage as well, the HTC One’s battery begins to show the strain. With a day of extensive shooting in the evening, the HTC One barely made it back home with juice in our pocket.

The HTC One sports a 4.7-inch display (4.65-inch to be exact) and is capable of rendering visuals in full HD, 1920 by 1080 pixels resolution. This gives the HTC One a pixel density of 468ppi which is higher than its 5-inch full HD competitors, such as the HTC Butterfly and the Sony Xperia Z, which only boast a pixel density of 433ppi. After viewing a variety of content, including text, it was easy to say that the HTC One’s display was one of the sharpest if not the sharpest we had ever witnessed.

The panel type for the HTC One is a Super LCD 3, which is an improvement over the older Super LCD 2 panels featured on the HTC One X. HTC’s decision to stick with LCD rather than switching to AMOLED is interesting (but is more likely a supply agreement problem than anything else). That aside, the HTC One’s display in our opinion gives a natural and balanced image. Blacks are also sufficiently rich and dark. Smartphones with AMOLED screens in comparison have better contrast ratios and hence deliver more eye-catching visuals. But the neutral tone produced by the Super LCD 3 is something AMOLED screens cannot replicate with proficiency.

For the HTC One, what we found lacking was the brightness of the screen. In direct sunlight, with brightness set to maximum, we experienced slight problems in viewing content on the display. AMOLED screens perform marginally better in such scenarios due to their more vibrant display. Initial usage of the HTC One led us to want more contrast and brightness, but as time progressed, the neutral colors of the display grew on us and we actually developed a preference for them.

HTC products have been sporting the Beats logo for a while now and boasting Beats Audio, but in our opinion, it hasn't been a game changer. The HTC One makes us reconsider that stance. First up, the new HTC flagship comes with the required hardware to be an audio powerhouse in the shape of dual front facing stereo speakers and built-in amplification. The audio system on the One is definitely capable of pumping out the volume. We could hear content being played on the phone when it was behind a closed door while we were in an adjacent room. The volume levels were easily on par with what you would get if you paired the HTC One with a small X-Mini speaker.

Secondly and more impressively in our opinion, the quality of sound was good. You could distinctly hear the three bands of audio frequencies, namely bass, mids and trebles. Furthermore, soundstage projected was very good seeing that it was coming from a smartphone. Lower frequencies sounded like they were being processed and boosted, indicating that the Beats codecs were earning their keep. Trebles were a bit shrill. But putting aside our audiophile preferences, the HTC BoomSound helps make the One the best sounding smartphone we have come across to-date. There's no competition in this segment as the One stands out in its own class.

HTC’s UltraPixel development deserves an in-depth look to ascertain its effectiveness, which we will be bringing you in the coming days. However, we did have the opportunity to quickly rifle through the camera and its various features. Firstly, due to the small megapixel count, the HTC One is able to snap photos at an exceedingly quick pace. There is virtually no delay between pressing the on-screen shutter button and capturing the shot. HTC has also added in built-in filters for you to "instagram" your images as soon as they have been recorded.

As explained earlier, the Zoe feature allows you to record a 3.6-second video and extra a total of 20 stills from it. While it sounds gimmicky on paper, in function, Zoe gives a good account of it. It is especially helpful for those who just want to point and shoot to capture the moment. The 3.6-second time window essentially works like the burst shooting mode on other cameras, except that you're actually recording a video in addition to capturing those additional images. After Zoe is done, you can select your favorite photograph from the lot and discard the rest, or even combine certain elements from various stills captured in that series to form what is called a sequence shot.

Stay tuned for a more detailed article coming shortly that compares its photo capturing capabilities against other competitive phones out in the market!