HTC One S - The One In The Middle

HTC One S - The One In The Middle

The HTC One S has been long delayed and is the last of its family to make its appearance in the Philippines ever since we first saw it at Mobile World Congress 2012 in Barcelona. To recap, it's part of the three smartphones in the One series that make up the flagship suite of mobile devices for HTC for 2012. We blame the delays on its troubled past - the chipping issues faced by its ceramic coating and the alleged Snapdragon S4 processor shortages, of which the One S is originally supposed to be shipped with.

Due to the shortage, the HTC One S sold in the Asia-Pacific region (as well as certain European markets) will be equipped with Qualcomm Snapdragon S3 dual-core processor. While its higher-end One X cousin is clearly made for tech trend chasers and the One V is made for users looking for an affordable smartphone, the One S sits in between both.  Let's take a quick look at the comparison chart: 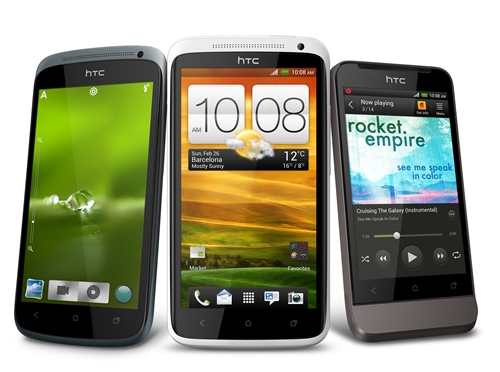 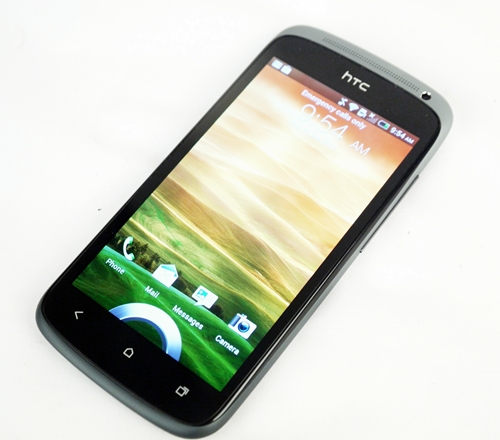 If you have been noticing HTC's recent handsets, the HTC One S will not really astound you. However, the One S, and the rest of the One series for that matter, are stunning to say the least. Unlike the Sony Xperia series, all three HTC One handsets have differentiating designs (but yet, share certain common traits to give them a feel of similarity), which help give each phone its individual flavor. Take for instance, the One S comes protected in an aluminium unibody casing and showcases a gradient shade of greyish-blue - quite different from the black or white HTC One X or the gun metal-flavored One V. Nonetheless, HTC gets props for ditching the usual monotonous black, plasticky look that most smartphones have.

To add on, the One S' aluminium casing has been processed through what HTC calls the Micro Arc Oxidation which allegedly makes the phone more sturdy and less impervious to knocks; however, we would still advise users to get a case for extra protection. 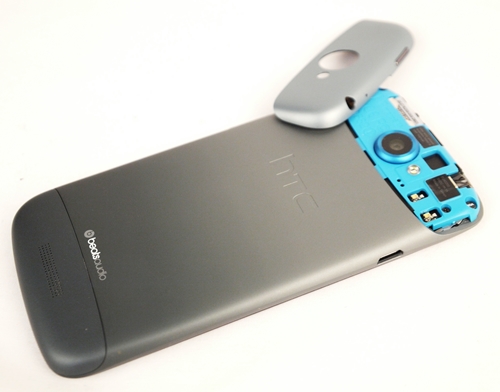 The HTC One S is also the thinnest of the three at 7.8mm, which gives it a very sleek and minimalist exterior despite housing a 4.3-inch screen. This makes it just a tad thicker than the Motorola Razr which boasts a 7.1mm thin profile. It is also significantly thinner and lighter than the Sensation XE, which comes with the same 4.3-inch screen form factor and screen resolution.

Like most Android 4.0 smartphones in the market, the HTC One V is retrofitted with three touch buttons (back, home, multitasking). Physical buttons are long strips that present good feedback and pose no problems with functionality despite its thinness. If you are concerned about fingerprint smudges, you don't have to worry here. Based on its existing portfolio of handsets, HTC has never taken too kindly to glossy covers, resulting in phones that are clad with matte surfaces. From our point of view, this is fantastic as it means less fingerprint smudges, a better grip, and a more presentable-looking device.

First and foremost, the HTC One S comes with Android 4.0 and HTC Sense 4.0 user interface, which puts the software experience pretty much identical to the One X than the One V (the latter runs on a lite UI version called Sense 4.0a). We are not going into details here but If you want a better look at what both offer, do take a look at our Android 4.0 Basics article and our recent HTC One X review (which is also where we discussed of the HTC Sense 4.0 UI).

Like the HTC One X and V, users of the HTC One S can get 25GB of Dropbox space free for two years when they sign on to their account on the phone. Do take note that you can also increase your Dropbox storage space by sending referrals to your friends, which will net you an extra 500MB per successful referral. This will come in handy for users of the One S as it comes with 16GB of on board storage and no SD card expansion capability. While 16GB is plenty for the average user, most still prefer to have the option of relying on the microSD expansion for extra space to store their media and so forth. Thankfully, with the free 25B Dropbox space and free cloud services like Google Drive, users don't have to worry so much about maxing out their handphones' memory space.

The HTC One S comes with a dual-core Snapdragon S3 processor clocked at 1.7GHz alongside 1GB of RAM. As usual, we subject the review unit to the Quadrant benchmark, which can be found on Google Play. To gauge how it performs against the competition, we matched its scores against similar devices using double-core processors such as the Sony Xperia S, HTC Sensation XE and Motorola Razr. 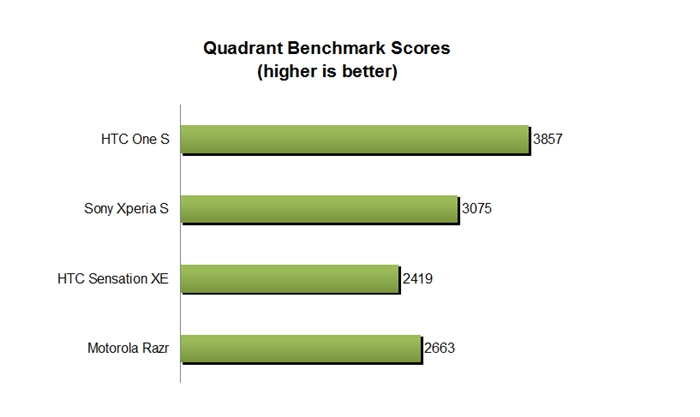 As depicted in the chart above, the HTC One S fared excellently against its competitors, gaining a pretty wide margin over all the other smartphones in the comparison, the Sony Xperia S, Motorola Razr and HTC Sensation XE. We attribute this to better optimization due to its Sense 4.0 UI, a Snapdragon S3 processor clocked at a speedy 1.7GHz and the Android 4.0 OS. Its clear victory over the HTC Sensation XE will probably be a deciding factor for those looking for a HTC device with similar hardware options - and of course, its edge also extends to an out-of-the-box Android 4.0 OS with the HTC Sense 4.0 UI.

As a point of reference, the HTC One X scored a high of 4025 points while the HTC One V achieving a score of 2001, which puts the HTC One S squarely in the middle where it belongs.

Apart from benchmarking results, in actual usage, the HTC One S ran smoothly and had no problems rendering web pages or running graphic-intensive apps. Performance was positive on the whole and lag-free due to a competent mixture of the dual-core processor and 1GB of RAM. In short, general performance and responsiveness is good like the rest of the One series and the benchmarks only add to its favor.

The HTC One S arms itself with a 8-megapixel camera with a backside illuminated sensor and a front-facing 1.3-megapixel camera. Images looked relatively sharp, though noise levels could have been improved. Colors are slightly on the green side of things and are slightly whitewashed; otherwise, the One S performed pretty well in this department. 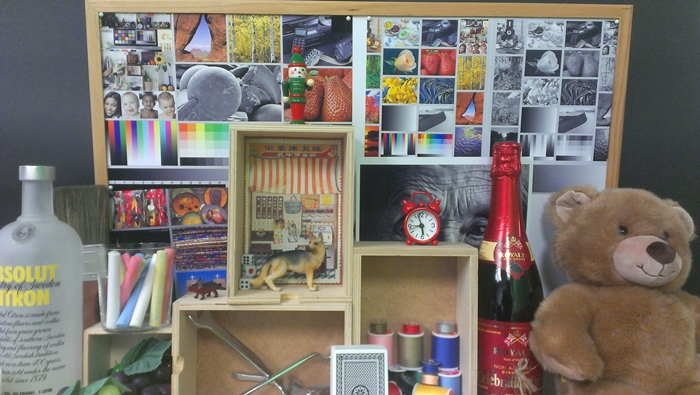 The HTC One S comes with a 4.3-inch qHD (540 x 960 pixels) Super AMOLED display, ditching the usual S-LCD technology that is usually found on their phones. That's a good addition of course as the screen comes with richer contrasts, crisp details, good viewing angles under sunlight and most importantly, deeper blacks.

Using the same 480 x 800-pixel resolution video that we use across all our mobile device battery tests, we set the same test parameters which includes having the video looped under the following conditions: 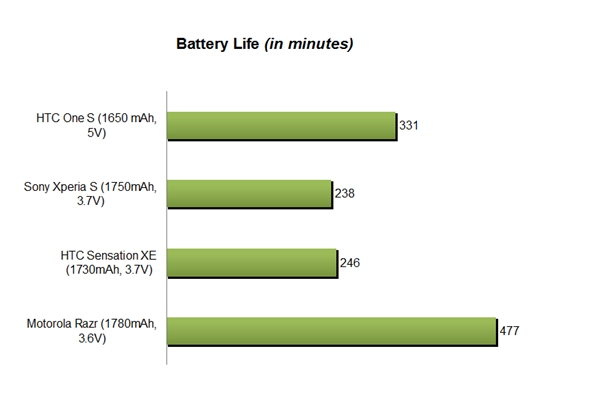 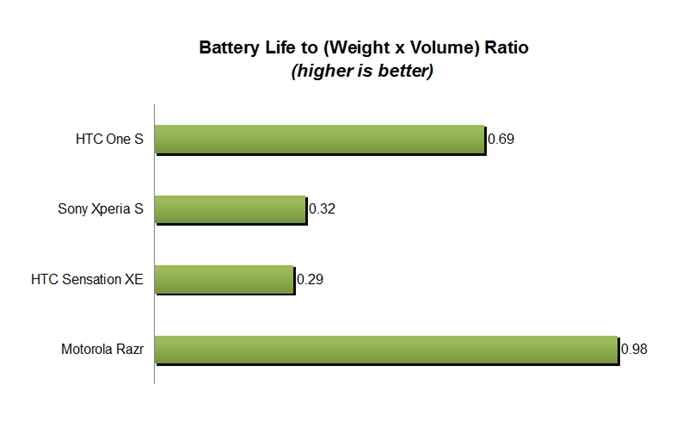 HTC phones have traditionally underperformed in our battery tests and it is pretty much the case here for the HTC One S. Nonetheless, compared to its LCD/S-LCD toting counterparts, the Sony Xperia S and the HTC Sensation XE, it does marginally better, outlasting them by about 100 more minutes. Compared to the Motorola Razr however, it falters behind by about 140 minutes in our strenuous test. The results are likewise replicated in the portability index (battery to volume ratio); while the HTC One S is thin and light in all things considered, the Motorola Razr comes with a thinner profile and a slightly heavier body which still puts it in first place. The wide margin over its HTC sibling, the HTC Sensation XE, can be attributed to several factors: its SUPER AMOLED-equipped screen which is more power-optimized, smaller and lighter body, the power-saving Android 4.0 and the HTC Sense 4.0 UI.

Once again, as a point of reference, the HTC One X lasted a total of 360 minutes with the HTC One V achieving a duration of 342 minutes. We would have expected its performance to on par with One V's but of course, there are several factors to consider. Firstly, the One V comes with a much smaller screen size of 3.7-inch screen with a 480 x 800 pixels resolution. On the other hand, despite HTC One X's larger 4.7-inch Super LCD 2 display with 720 x 1280 pixels resolution, the device also features a larger battery capacity of 1800mAh and a power-saving quad-core Tegra 3 processor.

To give you a real-world gauge, we observed that the phone could last almost a whole day on a single charge, with emails and Twitter feeds pushed constantly to it. Other activities included occasional web surfing and phone calls.

We have mentioned time and time again: HTC has had a record of making phones that are fashionable and sleek-looking, and the company has certainly outdone itself with the HTC One S. Its slim metal unibody with anodized finish has been extremely well-crafted and it's no exaggeration to say that it is one of the best-looking phones out there. To add on, it comes with a 4.3-inch qHD Super AMOLED touch screen and well-rounded performance, despite operating on a rather outdated dual-core S3 Snapdragon chipset. Its camera capabilities might not be the best of the 8-megapixel devices available in the market, but it is rather decent to say the least, with space for improvements.

Of course, the device is not without its Achilles' heel(s). Battery performance could have been better, while its non-expandable memory might be a point of contention for some even with its cloud storage option. However, we would say the main factor that might sway opinions to favor its competition is undoubtedly in its price point. The HTC One S sells at PhP 23,950, which is certainly less expensive than the HTC One X (PhP 32,990) and the Samsung Galaxy S III (PhP 32,990), all of which come with better hardware and capabilities. The other 4.3-inch contenders listed in the review have the following prices: Sony Xperia S (PhP 24,400), HTC Sensation XE (PhP 31,500) and Motorola Razr (PhP 29,999). The One S is also available bundled with the Monster Beats Solo headset which logically puts an additional cost on top of the handset's actual price.

Those who are not in a hurry to get a phone and are looking specifically for phones with similar specs also have the option of waiting up for the Xperia devices that are coming up later in Q3 or the Motorola Razr Maxx coming end-June. There's also the recently-released, affordable LG Optimus L7 (PhP 15,990) to consider, if you don't mind the downsized specs (at the very least, it still comes with a 4.3-inch screen and Android 4.0) or the older Samsung Galaxy S II to fall on.