HTC One X - Return of the Champ

The HTC One X is powered by NVIDIA's Tegra 3 quad-core processor and 1GB RAM, the former having a slightly higher clock speed of 1.5GHz compared to the 1.3GHz of the ASUS Transformer Pad Prime. Along with the Samsung Galaxy Nexus, the HTC One X joins the league of smartphones preloaded with Android 4.0, with a little icing on the top in the form of HTC Sense 4.0.

As usual, we'll be performing the Quadrant benchmark. For now, with the One X being the only quad-core phone available in the market, we matched it up against the more recent Android smartphones. The competitors are the Samsung Galaxy Nexus, Motorola Atrix 2 and Sony Xperia S - all utilizing a dual-core processor. The benchmark should provide you with an idea of the performance difference between the latest quad-core processor versus the previous generation of dual-core processors from Qualcomm and Texas Instruments. The NVIDIA Tegra 3 quad-core processor showcased its prowess in the Quadrant benchmark by propelling the HTC One X ahead of the competition by a huge lead. Taking into account that the competing phones run on dual-core processors, it is not surprising to see the One X leaving them in its wake. The Sony Xperia S had a commendable showing, thanks to its 1.5GHz dual-core processor, the fastest among its dual-core peers.

Synthetic benchmarks aside, the One X's refined Sense UI and Tegra 3 quad-core processor did its job judiciously under the hood. Lags and system freezes were noticeably absent on the One X. Web browsing experience was evidently improved with near-perfect pinch-to-zoom responsiveness and the quick drawing of web pages.

One of the most hyped about multimedia features of the HTC One X is its rear camera. Its imaging features include an 8-megapixel camera, HTC ImageChip, a 28mm wide angle lens with f/2.0 aperture, backside-illuminated sensor, and a LED Smart Flash that adjusts the brightness according to the proximity of the subject.

The One X also boasts ImageSense, which has a number of features to enhance the functionality of the camera. For example, HTC places the photo and video modes on the same interface, thus saving you the hassle of switching between the two modes. The quick start up time of the camera (0.7 seconds) is also significantly faster than the Apple iPhone 4S, and even Engadget claims that the Galaxy Nexus is no match for the speed of the HTC One X. 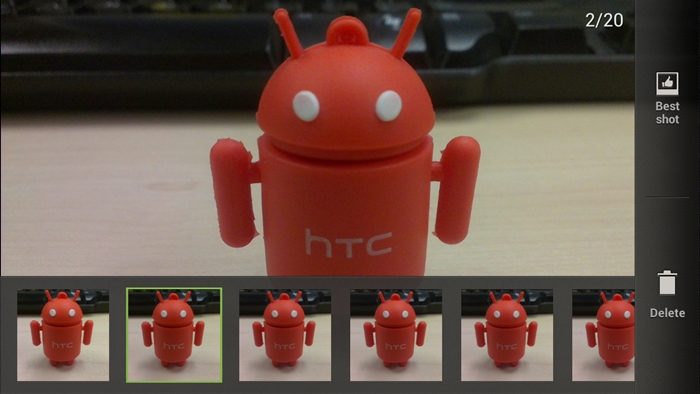 HTC surprised us once again with the excellent image quality of the One X - there is good color reproduction and minimal noise levels. The camera also managed to capture plenty of details.

While AMOLED generally delivers more vibrant - albeit over-saturated - colors, Super LCD 2 tends to give more natural colors. At a resolution of 1,280 x 720 pixels, the display of the HTC One X is really impressive and can hold its own against its AMOLED-equipped competitors. Text and graphics looked great on the display; words appeared to be floating near the surface of the screen, an illusion we attributed to the curved sides of the 4.7-inch display.

Unfortunately, we encountered two issues with the display while reviewing the One X. First, there are user reports of screen distortion at the top left corner and bottom section. Second, when we set the display to full brightness and browsed through Google Play, we noticed the screen was flickering at certain portions near the center. We were unable to replicate the same issue with other apps. It could be an app issue, or a refresh rate issue, or a combination of both.

When we reached out to HTC Singapore for comments, the company acknowledged the display problems, and said that it is working to fix them in the next software update. However, no time frame is provided as to when the software update will be ready.

*Update: HTC issued the over-the-air (OTA) update 1.28 on 23 April. According to HTC Singapore, the OTA update will address the display distortion issues and stabilize HTC Sense. Improvements to battery life and camera functions are included as well. So far, we have not encountered any display issues on our unit after installing the update.

It's a pity that the HTC One X comes with no memory card slot; this means that you have to make do with the 32GB of onboard memory. For those who need more than 32GB, the partnership with Dropbox may come as a blessing. Users of the One series of phones will get 23GB (excluding the 2GB storage space when you sign up for Dropbox) for two years. After two years, you can no longer upload files to the 23GB of storage space. Alternatively, you can increase your Dropbox storage space by sending referrals to your friends, which will net you 500MB per successful referral. Leveraging NVIDIA's Tegra 3 "4-Plus-1" quad-core architecture, the HTC One X managed an acceptable uptime of 5 hours and 42 minutes, a decent showing for a phone of its caliber. For those who are unfamiliar with the "4-Plus-1" quad-core architecture, the Tegra 3 in fact has five cores: four CPU cores to handle the processor-intensive tasks such as gaming, and a fifth battery saver core (also known as the "companion" core) that manages low-power tasks such as email processing and standby mode. This unique architecture enables the HTC One X to deliver high performance and great battery life at the same time.

The Motorola Atrix 2 only managed to edge out the One X due to its smaller 4.3-inch display and 1GHz dual-core processor which consume less power. As the One X is the lightest among the four phones, measuring a mere 8.9mm thin and has the second best battery life, it fared quite well in our Portability Index too.

The new Apple iPad is not the only device with a heat issue. Apparently, we encountered a similar problem on the HTC One X. When playing games or watching videos over an extended period of time, the area below the camera module at the back felt a little too warm for our liking. Some users also commented that the display feels warm during video streaming.

With so many Android smartphones to choose from, what exactly does one need to be the one phone that people want to buy?

The HTC One X has one of the most elegant designs we've seen so far and maintains an excellent build quality. Its slim profile also makes it easy to slip in and out of our pockets. Sense 4.0 is at its best in years, and HTC certainly deserves some praise for streamlining and refining the Sense UI to work in tandem with Android 4.0.

We like the 4.7-inch Super LCD 2 display on the HTC One X for its accurate colors and good viewing angles. It certainly can stand shoulder to shoulder with the iPhone's Retina Display and Samsung's AMOLED-touting Galaxy devices.

Though quad-core processors may be overkill for most smartphones today, we appreciate that HTC future-proofs the One X against potential competition such as the Samsung Galaxy S III. Moreover, the Tegra 3 quad-core processor in the One X delivers better performance and longer battery life than some of its dual-core competitors.

Traditionally one of the weakest areas of HTC devices, the superb camera performance of the HTC One X is something that deserves another mention. HTC has taken a more integrated approach in improving the imaging performance across the One series, and the end result is telling.

The shift to a non-removable battery and removal of the memory card slot may be deal breakers for some, but these are inevitable to achieve the sleek design of the One X. The free 25GB (inclusive of the standard 2GB given to all users) of bundled Dropbox space may ease the concerns of power users who require more than the 32GB of onboard storage.

However, we are not saying that the HTC One X is flawless. The numerous reports of display distortion and buggy Facebook for HTC Sense are issues you don't expect from a flagship model. Some demerit points are in order, even though HTC has plans to roll out software updates to address these issues.

Priced at S$898, the HTC One X is highly recommended for consumers who are holding onto phones running on single-core devices. You can't go wrong with the HTC One X if you want the best Android smartphone in the market at the moment. The Samsung Galaxy Nexus is an attractive alternative if you dislike customized UIs, but the One X has more than enough plus points for you to make it the right one for you. 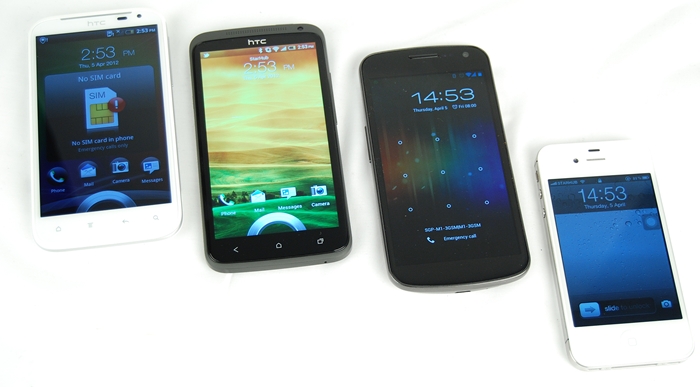