Lenovo's ThinkPad series has always appealed to business users for its associated features such as security, reliability and build quality. Adding to these properties, you can't deny that its matte black finish further sealed the ThinkPad's image. However that stereotyping is about to change with the brand new ThinkPad Edge line-up with its contemporary look and flashy colors, but still keeping the qualities that the ThinkPad line is fabled for.

Aimed mostly at Small Medium Businesses (SMBs), the notebooks are the first ThinkPad machines to be powered by AMD's platform, though this Edge 13 notebook comes in both Intel and AMD flavors. Besides the internal hardware and the glossy exterior, the contours of the notebook have also been tweaked to a silver-gray hue, and are actually rounded at the corners with no edges. That's some irony going by the notebook's name.

As for the notebook interior, Lenovo too has made some changes, such as incorporating a chiclet style keyboard, which makes the Edge 13 the first ThinkPad notebook to sport one. 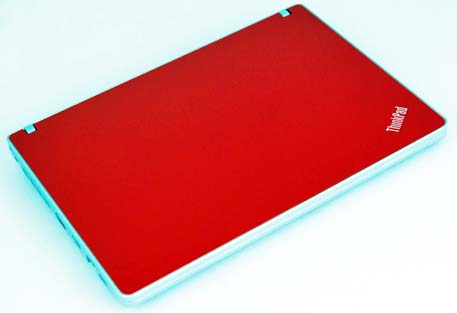