Furthering its gaming line of products, MSI is bringing out new motherboards that are based on the new Intel Z97 chipset and the Z97 Gaming 7 board is one of those. We managed to get a hold of a sample of this board and we’re here to look at what it brings to the table. 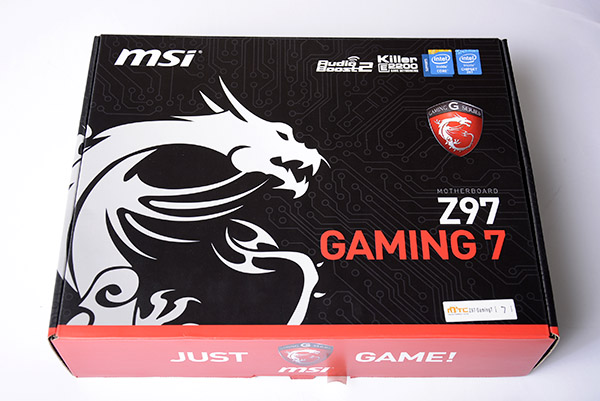 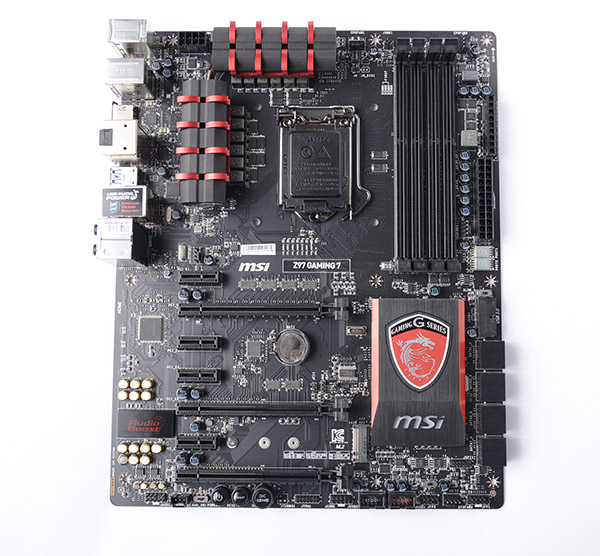 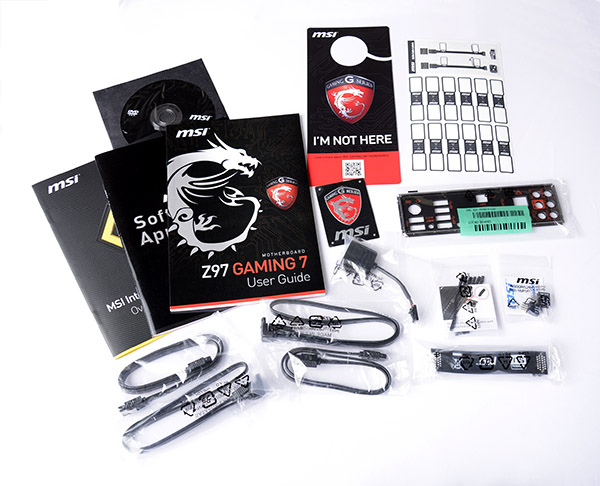 The MSI Z97 Gaming 7 follows the standard ATX form factor and uses the black with red accents color scheme of MSI’s Gaming series. The PCB also now comes in matte black instead of brown, which many didn’t like. 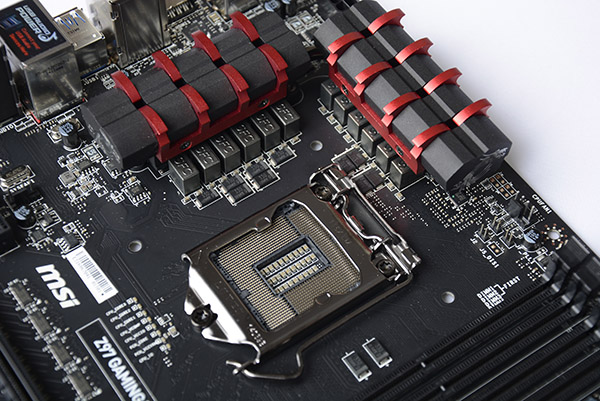 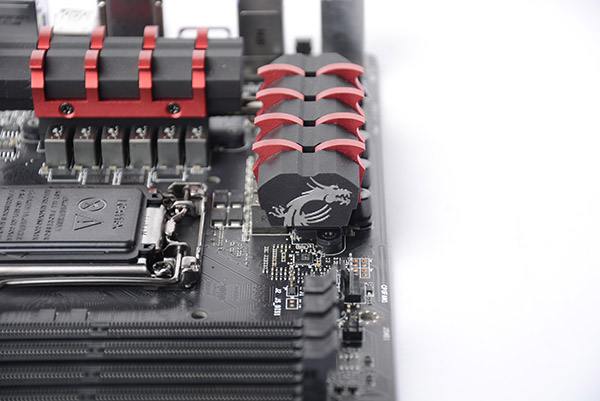 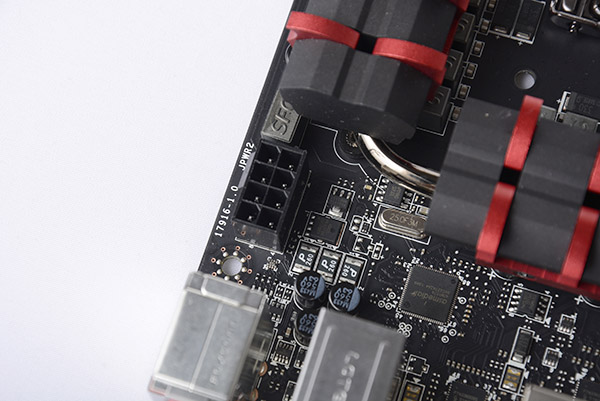 As mentioned, it features Intel’s Z97 chipset and uses an LGA1150 socket, which supports current 4th generation Core processors, the upcoming 4th generation refresh, and the soon to come 5th generation Core processors. Notable differences of the previous Z87 chipset to the new Z97 chipset is the Intel Rapid Storage technology for PCIe-based storage, Intel device protection with Boot Guard technology, and support for the M.2 and SATA Express technologies. Fourteen USB ports (up to 6x USB 3.0), six SATA ports (up to 6Gbps), and 16 lanes of PCIe 3.0 are still included in the Z97 chipset.

Like the previous Gaming series motherboards from MSI, the Z97 Gaming 7 also comes with Military Class IV components. These include the Hi-C CAPs, Super Ferrite Chokes, and Dark CAPs to make sure that the board runs more stable when under load. 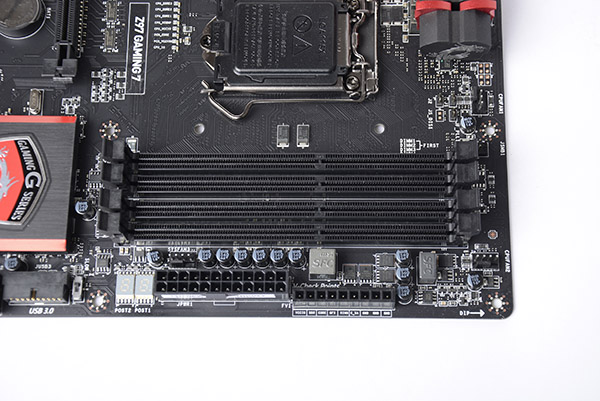 On the right of the CPU socket are four black DIMM slots, which use the dual-latch locking mechanism. These slots support overclocked memory modules rated up to 3300MHz and up to 32GB capacity.

Moving on to the board's rear I/O ports, it features eight USB 3.0 ports, two from the Z97 chipset, four from the ASMedia ASM7041 chipset, and another two from the ASMedia ASM1042 chipset, and two USB 2.0 (red). The red USB ports combined with the PS/2 combo port are MSI's Gaming Device Ports, which the company touts to deliver the best connectivity to gaming peripherals due to its higher polling rate. The black button between the Gaming Device Ports and four USB 3.0 ports is the Clear CMOS switch.

When it comes to display connectivity, it has two HDMI ports and a lone DisplayPort. These ports support resolutions of up to 4K but runs at only 24Hz, 2560 x 1600 pixel resolution and below at 60Hz. The red LAN port is powered by a Killer E2205 Gigabit LAN controller. Do note that the accompanying Killer Network Manager is only supported on Windows 7 and 8 operating systems for now. For audio, there's an optical S/PDIF OUT connector and six OFC audio jacks.

In terms of expansion slots, the board has three PCIe 3.0 x16 slots and four PCIe 2.0 x1 slots. The three x16 slots operate on x16, x8/x8, or x8/x4/x4 depending on how they are populated. Another note here is that only the top most x16 slot is electrically-capable of running on x16 mode.

In between the second and third x16 slot is the M.2 socket, which is capable of providing up to 10Gbps transfer rate. This slot not only supports drives that use the M.2 socket, but also the optional M.2 to SATA Express card that MSI sells separately. The M.2 port supports M.2 SATA and M.2 PCIe modules. 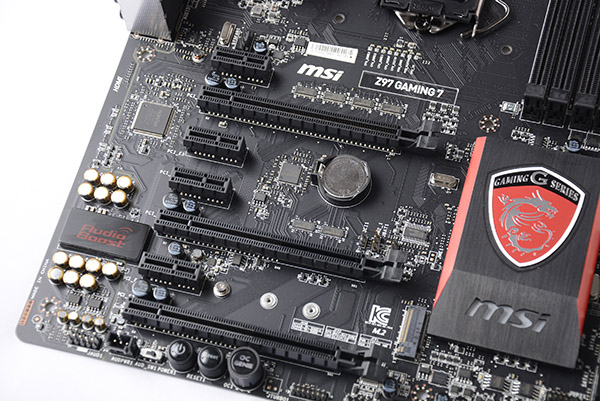 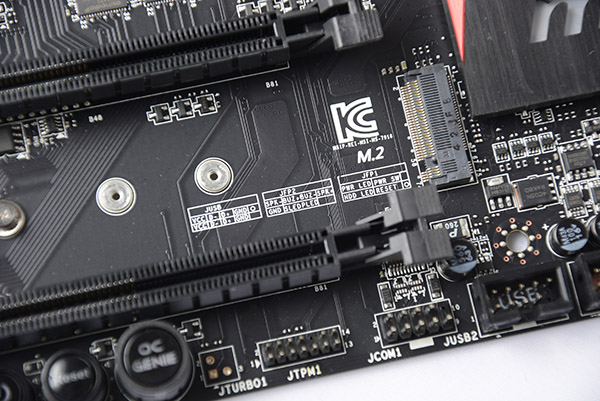 When it comes to storage, users have the option of filling out eight SATA 6Gbps ports. Six of which are controlled by the Z97 chipset and the other two are managed by the onboard ASMedia ASM1061 chipset. The fifth and sixth SATA port will be disabled if you have an M.2 device installed. These SATA ports support RAID 0, RAID1, RAID 5 and RAID 10, and also Intel's Smart Response, Rapid Start, and Smart Connect technologies.

As of late, audio has become a focus for motherboard manufacturers. MSI's Z97 Gaming 7 board employs the Audio Boost 2 technology, which combines an isolated audio PCB, improved onboard components such as capacitors and amplifiers, and Creative's Sound Blaster Cinema 2, to bring in a better overall audio experience. To bring things further, MSI has implemented an audio switch that users can toggle to activate Direct Audio Power. This option allows the usage of a dedicated power source via a Molex connector to pump up onboard audio.

Also there are two dedicated USB ports on the rear I/O port that provides a constant 5V signal thanks to MSI's USB Audio Power technology. This is a great addition for those using high-quality USB DACs since these devices are ensured to run to their fullest thanks to the stable 5V signal. 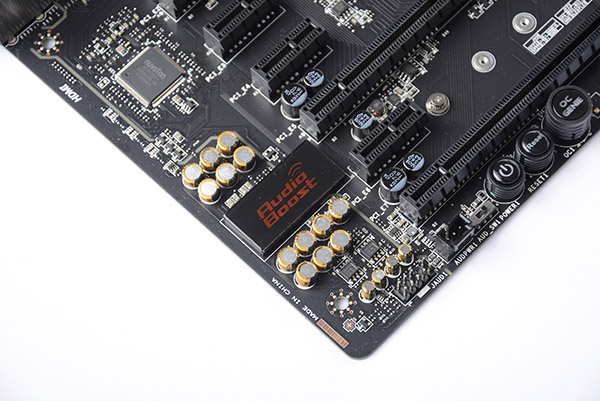 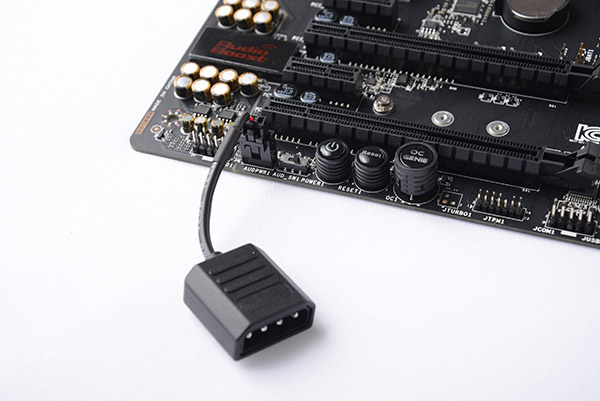 Now that we've covered most of the Z97 Gaming 7's feature and layout, there are still quite a few more things that we've noticed while doing a thorough inspection of the board. There are quite a few onboard switches, such as the BIOS, LN2, Power, Reset, and the OCGenie 4. 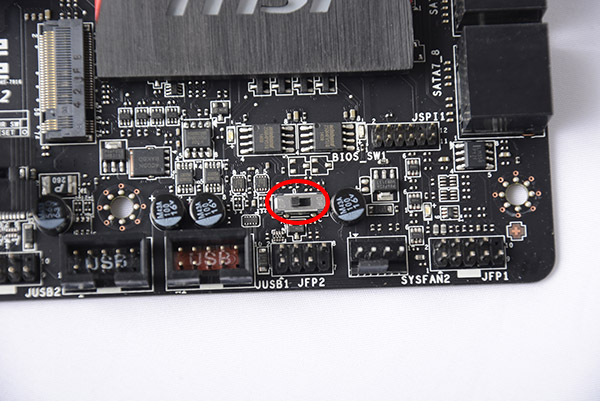 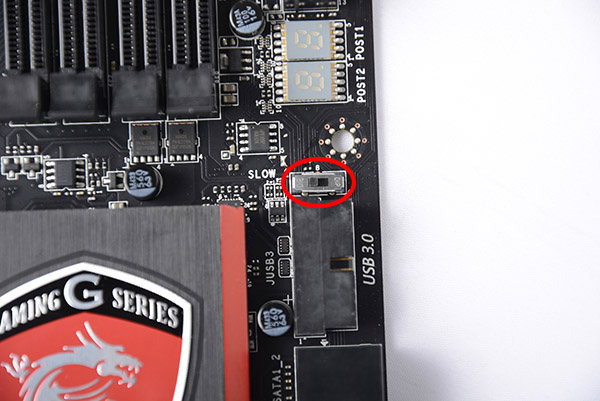 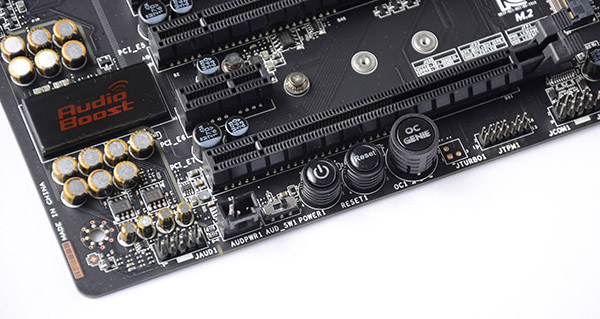 The BIOS switch enables users to switch from the main BIOS to the backup BIOS, perfect for those pesky situations where you encounter an error during a BIOS flash. The LN2 switch is there to remedy the cold boot bug when using LN2 cooling for extreme overclocking. Lastly, the OC Genie 4 button is a quick overclocking fix for those who would want to get more out of their unlocked processor but does not wish to dive into the BIOS and spend a ton of time to manually overclock. Do note that this method usually isn't the most efficient way to overclock so you might use this as a starting point to find your most stable overclock. 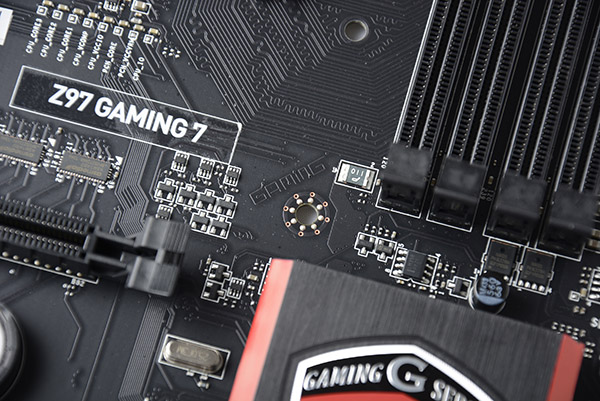