The MSI Z97 XPower AC is the highest end board from the company's Overclocking series. With its yellow on black color scheme, it's undeniable the Z97 XPower AC board will grab your attention on first looks. We first laid eyes on this impressive looking board back in early May, prior to the official launch and availability of Intel Z97 boards when MSI held a media event to showcase their full slew of 9-series motherboards.

The board bears some resemblance to its Z87 predecessor, the MSI Z87 XPower; however as we delve into its detailed specifications, there are a number of enhancements that set the current board apart. For a start, the Z97 board comes in the E-ATX form factor, which is slightly smaller than the XL-ATX form factor of the Z87 XPower, but nonetheless still larger than your average ATX board. 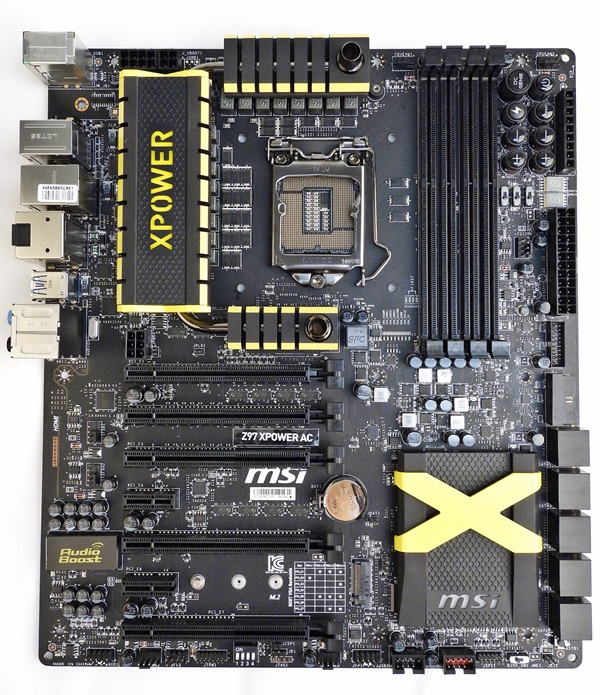 The heatsinks, in the vicinity of the LGA1150 CPU socket, have built-in liquid cooling blocks, and feature options for flexible tubing mounts. The heatsinks don't have a smooth finish like the MSI Z87 MPower Max as they have cross-sectional cuts that expose the MSI Superpipe, which is an 8mm, nickel-coated heatpipe connecting the three separate heatsinks. The pipe also allows the coolant liquid of an attached liquid cooling kit to provide additional cooling to the heatsinks. 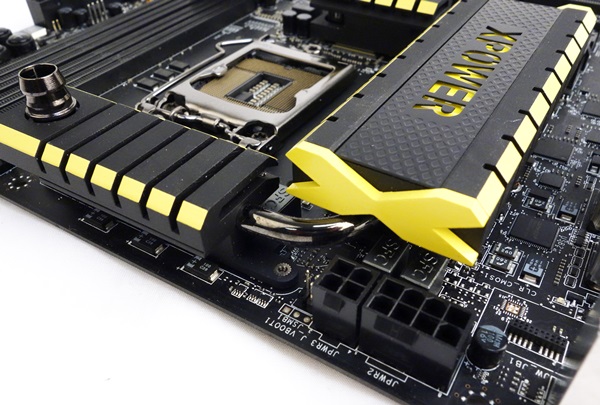 Located directly behind super ferrite chokes (SFC), the first two sections of the heatsinks provide cooling to the VRMs, especially the upgraded DrMOS MOSFETs. In front of the SFCs, we can see two clusters of the Hi-c capacitors (Hi-C Cap). Collectively, they make up the Military Class IV VRM of the board that drive the 16-phase power delivery system of the CPU and memory modules. 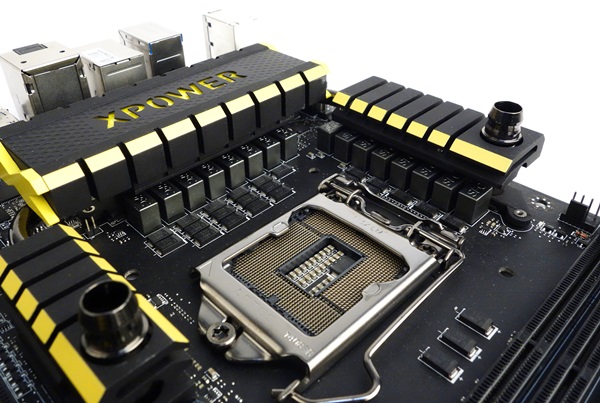 In this case, the third heatsink below the CPU socket, near the first PCIe Gen 3.0 x16 slot, indicates the presence of a PLX PEX8747 switching chip underneath. This chip takes in the 16 PCIe lanes from the PCIe 3.0 controller of a compatible Intel Core CPU, and serves out a total equivalent of 32 PCIe lanes. As a result, the Z97 XPower AC is able to support 4-way multi-GPU configurations for both NVIDIA and AMD graphics cards. In total, there are five PCIe Gen 3.0 x16 slots, and there is only one that bypasses the PLX chip for direct connection to the PCIe 3.0 controller of the CPU. This slot, second from the 6-pin ATX power connector, is used exclusively if only one graphics card is installed; however, this slot isn’t available for multi-GPU setups. The rest of the expansion slots consist of a pair of PCIe 2.0 x1 slots. 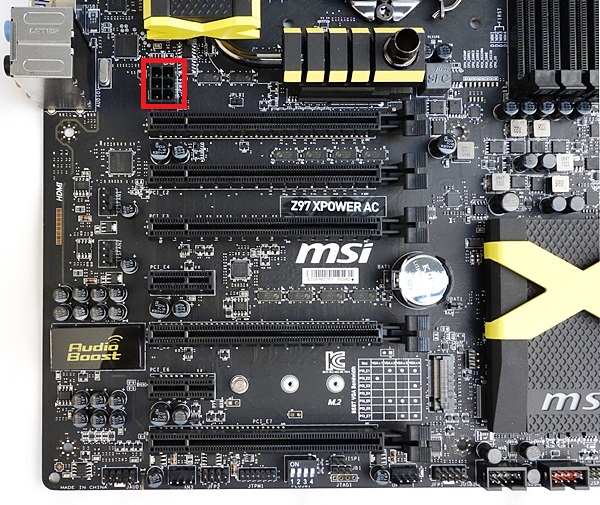 The M.2 interface is located between the last two PCIe x 16 slots and it is flexible to support both M.2 SATA 6Gbps and M.2 PCIe interface modules. In addition, it can fit three different sizes of these modules to fit most solutions. The board doesn’t offer any SATA Express connectors as they don't see the point in providing widespread support for it right now. However, MSI offers an optional M.2 to SATA Express converter card. 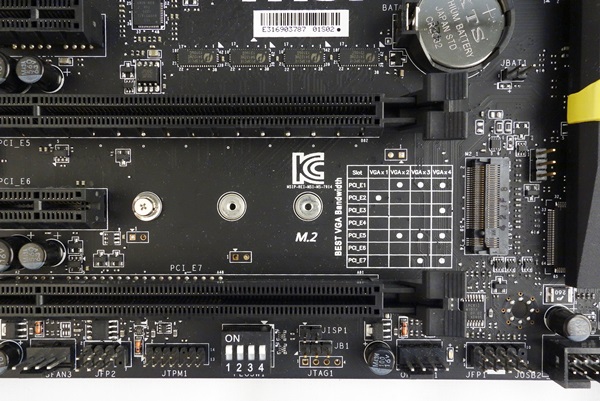 At the bottom of the board, we see the first few headers that consists of a front panel audio connector, a three-pin system fan connector, and a system panel one. Next to it is the TPM header that is located right next to the PCIe CeaseFire switch that is a DIP switch that controls the operation of expansion cards, usually graphics cards, on the corresponding PCI Gen 3.0 x16 slots. After this PCIe CeaseFire switch, there is a fan header, followed by another system panel connector. There are two USB expansion headers; one is of USB 2.0 standard, while the other supports USB 3.0.  Also at the bottom, near the right corner of the board, there is a Multi-BIOS switch that toggles between two sets of BIOSes. The Go2BIOS button is located in the right corner that allows you to boot to the BIOS utility without the need for any keyboard inputs. This button is useful as the keyboard is disabled during POST when the "MSI Fast Boot" feature is enabled. 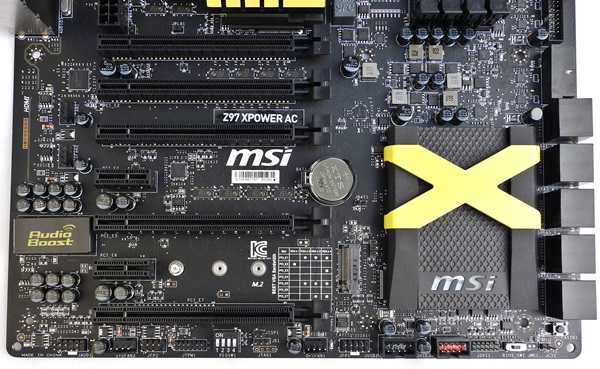 In terms of SATA 6Gbps connectors, there are a total of 10 such connectors, but you can't tell them apart from first appearances. This is because (from the right) six of them are connected to the Intel Z97 PCH; while the other four are linked to the ASMedia ASM1061 chipset. To the right of the SATA connectors, there is a  USB 3.0 expansion header.

As we move along this edge of the board, we see the collection of OC Essential buttons and DIP switches. They allow you to overclock the board on the fly. 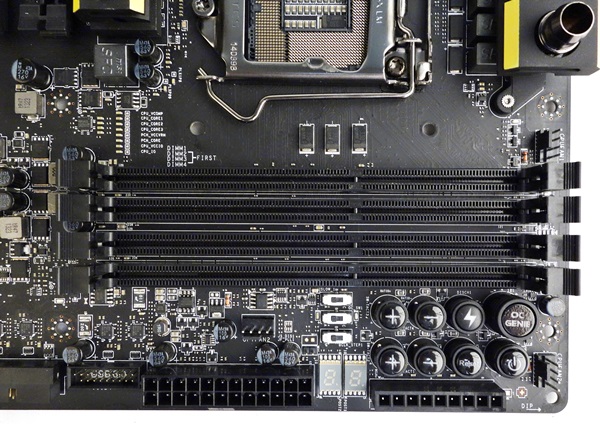 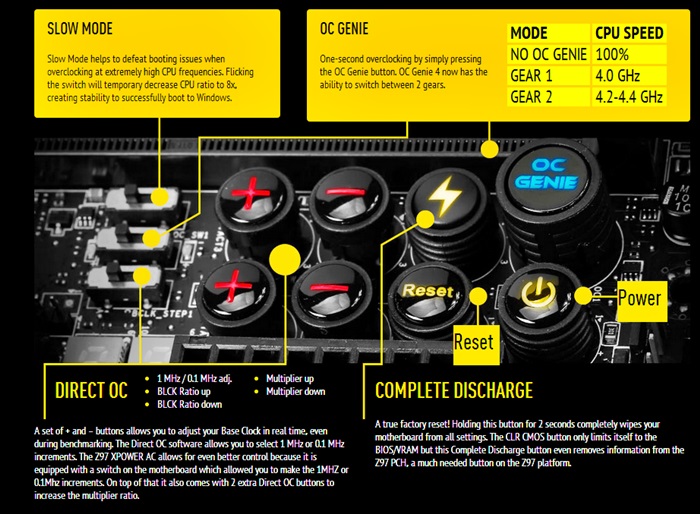 There is a set voltage measurement points that have been upgraded to V-Checkpoints 2, and they are located just after the onboard OC Essential buttons. They feature two extra ground connectors, and according to the company, this will allow overclockers to use up to three multi-meters at the same time. 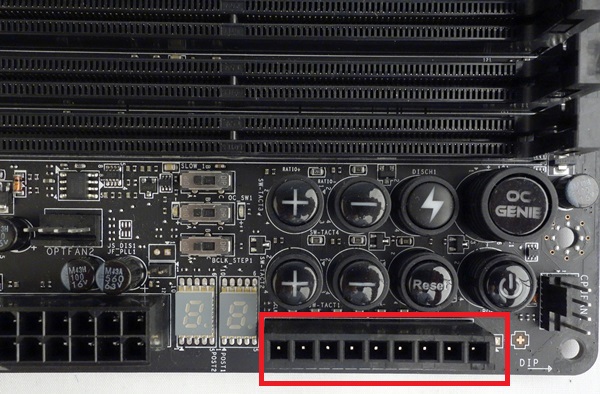 On one side of the DIMM slots, the PCB real estate is crammed with the OC Essential features; however, on the other side, MSI claims to have freed up more space around the CPU socket due to the design of the VRM heatsinks, as well as the incorporation of Military Class IV components. Besides allowing for large CPU coolers, the extra clearance also helps to accommodate insulation for the CPU during extreme overclocking situations when LN2 is utilized. 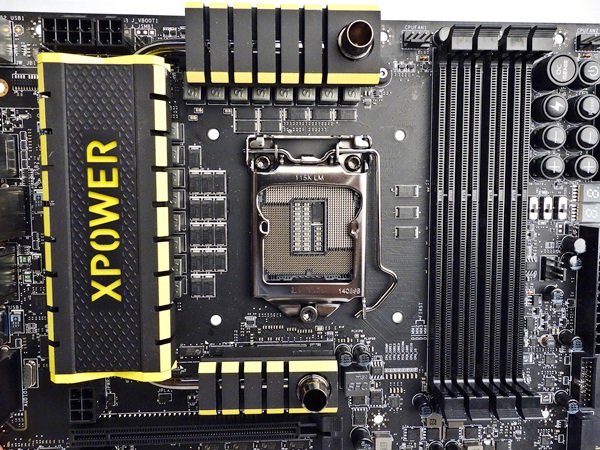 The rear I/O panel of the board consists of eight USB 3.0 ports (in blue), and a pair of USB 2.0 ones that are located below the PS/2 keyboard and mouse combo port. There is a clear CMOS button next to the stack of four USB 3.0 ports. In terms of video connectivity options, there is a DisplayPort port and a HDMI port. The S/PDIF digital audio out connector sits above the HDMI port, while at the end of the I/O panel, you'll see the standard group of six analog audio jacks.

With the bundled Intel dual-band wireless-AC 7260 module installed, the system is able to support up to 802.11ac and Bluetooth v4.0 connectivity. The pair of antennae extend the range of the module; however,  they aren't weighed down so they need to be secured with a sticky tape to prevent them from shifting around. 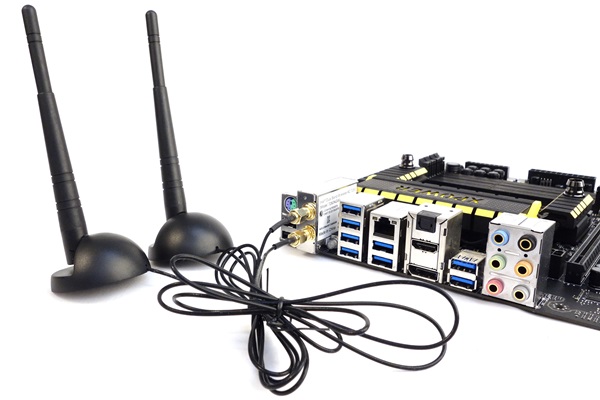 To stay true to its overclocking roots, the board comes bundled with a delid die guard that protects the LGA1150 CPU when its integrated heat spreader has been removed. Specifically, the die guard protects the CPU die. The die guard also allows for the smooth mounting of a cooling solution for the delidded processor. 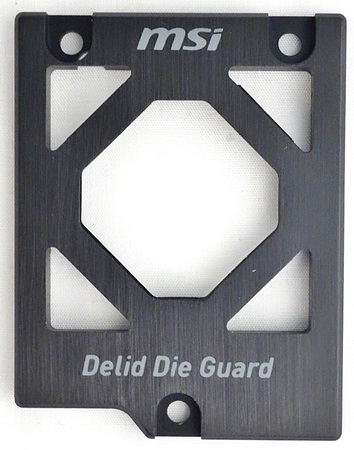 Last of all, the board comes with a cooling fan kit that allows you to mount a cooling fan. In some promotions, the 120mm Sharkoon Shark blade cooling fan is offered free with the purchase of the Z97 XPower AC. While keeping your gear cool is always a good thing, but in the context of extreme overclocking, we question its effectiveness. Perhaps the overclocker can use it to keep his cool instead? In any case, the cooling fan can also be mounted within your casing, so it's still a useful accessory. 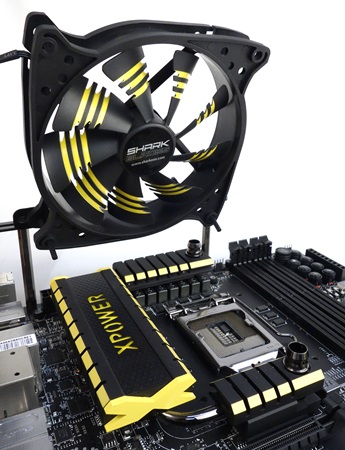 Finally, to round things up, the board comes with the Guard Pro technology that purports to guard against ESD, EMI, short circuits, and humidity. Each I/O port of the board has an integrated dual-ESD circuit that protects it from electrical damage when plugging and removing devices. The onboard audio is driven by the Audio Boost technology that features an EMI-shielded Realtek ALC1150 codec, with a 600-ohm headphone amplifier. According to MSI, its overclocking series boards have had their PCBs upgraded with more layers, up to a total of 8. This allows for better optimization of the board’s power and signal traces for overclocking. At the same time, the extra layers offer protection against the high humidity of the tropics, as well as electrostatic discharge that may fry the board’s components. 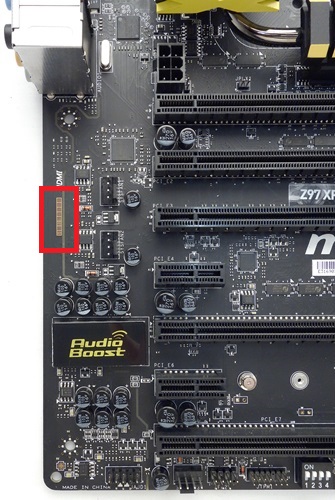 In conclusion, the designers of this overclocking-centric board have included additional features and unique add-ons that attempt to differentiate it from the rest of the competition. The optional SATA Express converter and its support for Intel WiDi technology are feasible and well thought out add-ons to future-proof the board too.

On a related note, you might also be interested to check out what took place at Computex 2014 and the MSI Z97 MPower Max motherboard as they attempted to set new overclocking records with Intel's latest "Devil's Canyon" processor.