All decked out in black and red

The Gigabyte Z97X-Gaming G1 WIFI-BK is notable because it comes with a certification that states the board has undergone a 168-hour long system testing that is normally reserved for servers running high availability applications. Therefore, only Gigabyte boards that have passed this grueling test will be awarded this certification and be considered a member of the Black Edition family. Paper qualifications aside, let us take a quick look at this board besides its alleged outstanding reliability. At first glance, the full ATX board sports a red-on-black color scheme with an ‘eye’ logo emblazoned in white on the board’s Intel Z97 PCH heatsink. According to Hunter Lee of Gigabyte, the eye logo is supposed to represent the red glow of a human (most likely superhuman) eye, signifying power waiting to be unleashed! 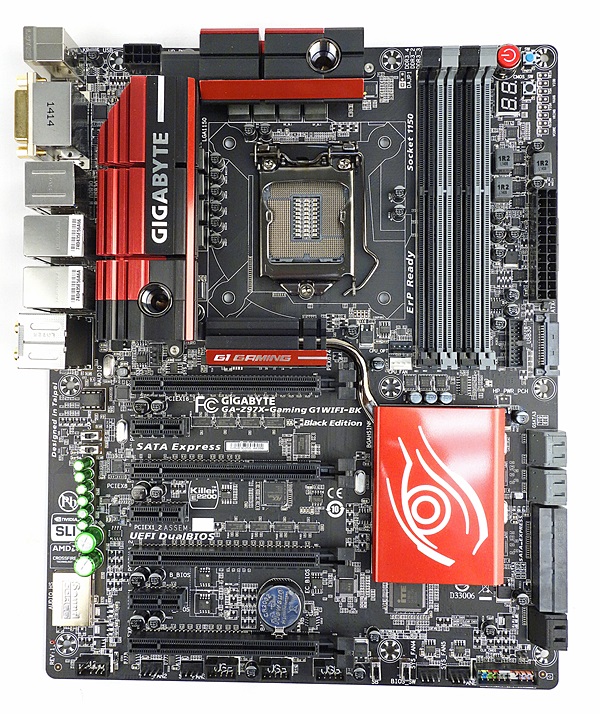 Like the MSI Z97 XPower AC, the Gigabyte board's three-section heatsinks, in the vicinity of the LGA1150 CPU socket, is connected by a heatpipe. The heatpipe even extends to the Intel Z97 PCH heatsink; we assume this is for heat dissipation. The pair of heatsinks, which sit on top the MOSFETs, have built-in water blocks, and they feature G1/4 fittings in order to accommodate standard liquid cooling kits on the market. These two heatsinks are large and thick, most likely to accommodate the water blocks; however, we fear that they may extend a little too far into the clearance between them and the CPU socket. This may make installing a custom CPU air cooler tricky. 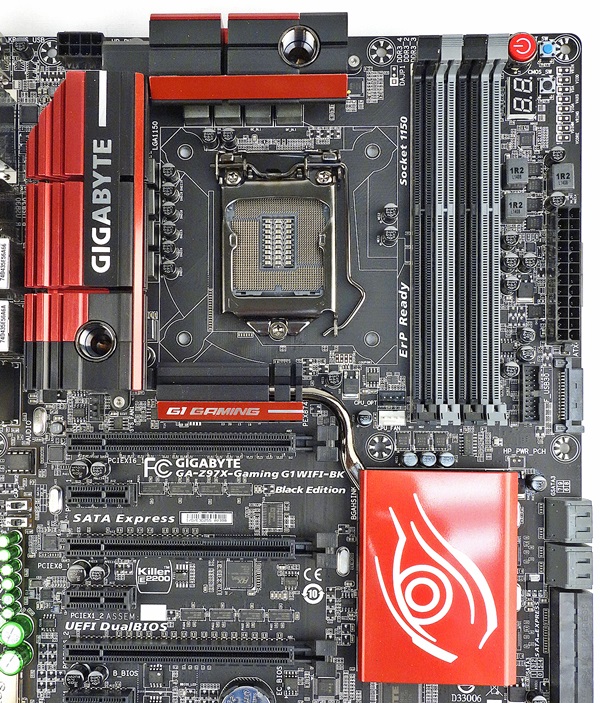 In front of the VRM heatsinks, we see a row of 10K capacitors, and behind them are the chokes. Collectively, the VRM components drive an 8-phase power delivery system to the CPU and memory modules. 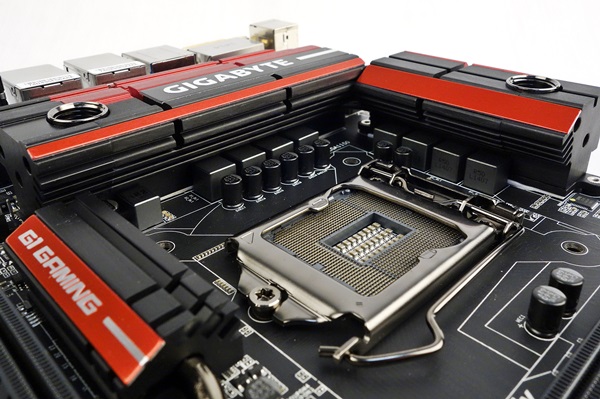 The third and smaller heatsink around the CPU socket cools the PLX PEX8747 PCIe switching chip. This switch takes in a total 16 PCIe lanes from the PCIe 3.0 controller of a compatible Intel Core CPU, and serves out a total equivalent of 32 PCIe lanes. In total, there are five PCIe Gen 3.0 x16 slots; however, none of them bypasses the PLX chip for a direct connection to the PCIe 3.0 controller of the CPU. The top PCIe Gen 3.0 x16 slot operates at x16 mode when only one PCIe Gen 3.0-compilant graphics card is installed. If the second slot is occupied in a two-card setup, the 16 original PCIe lanes would be evenly "fanned out" between the two occupied PEG slots; with each slot allocated the bandwidth of 16 lanes. In a 3-way setup, the PCIe lanes would be allocated in this manner, x16/x8/x8. If all four PEG slots are occupied, the final lane configuration would be x8/x8/x8/x8. Therefore, the board is able to support both 4-way arrangements of NVIDIA SLI and AMD CrossFireX graphics cards. 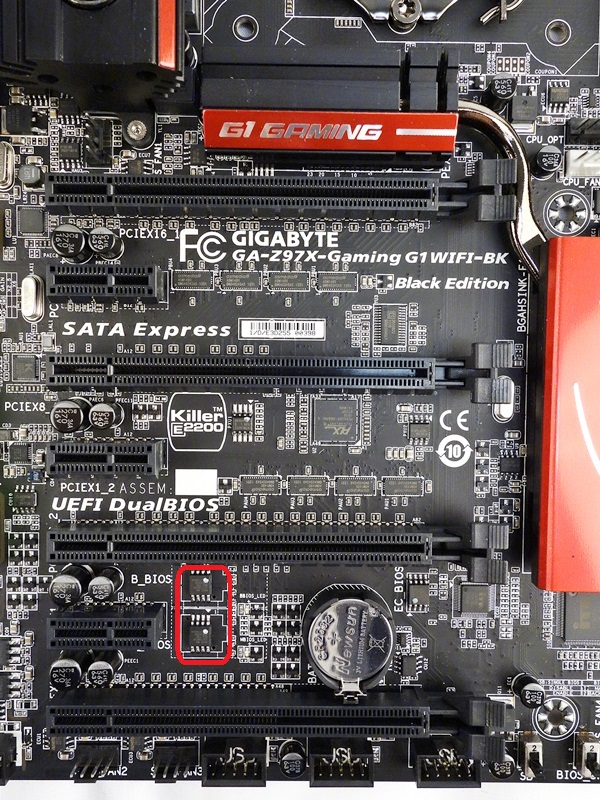 There isn't a M.2 interface and where the mounting screws of M.2 devices are supposed to be, we see a pair of BIOS chips that support the board's DualBIOS feature. Other than for backup purposes, it's also ideal for overclockers and power users to store one BIOS for normal usage, while the other is a staging platform for their overclocking and system tweaking efforts. The switch to toggle between BIOSes is located at the board's bottom edge, which we will take a closer look later.

Besides positioning the board as a gaming-centric component, the company has also enhanced its audio capabilities. The onboard Creative Sound Core 3D chip is backed by the Sound Blaster SBX Pro Studio software suite that has an extensive list of audio playback options. In addition, Gigabyte has included its T.I. Burr-Brown OPA2134A amp that can be swapped out according to the needs of the discerning audiophile/gamer. This amp is located above the row of green Nichion high-end audio capacitors. In between those capacitors and the T.I. Burr-Brown OPA2134A amp, are a pair of gain-boost switches. Altogether, the components mentioned in this paragraph make up the AMP-UP audio technology.  It is also marketed as the "G1 Audio", which is in-line with the gaming pedigree of this motherboard series. Some or most of these features have been present in the G1 series of Gigabyte motherboards from late last year. 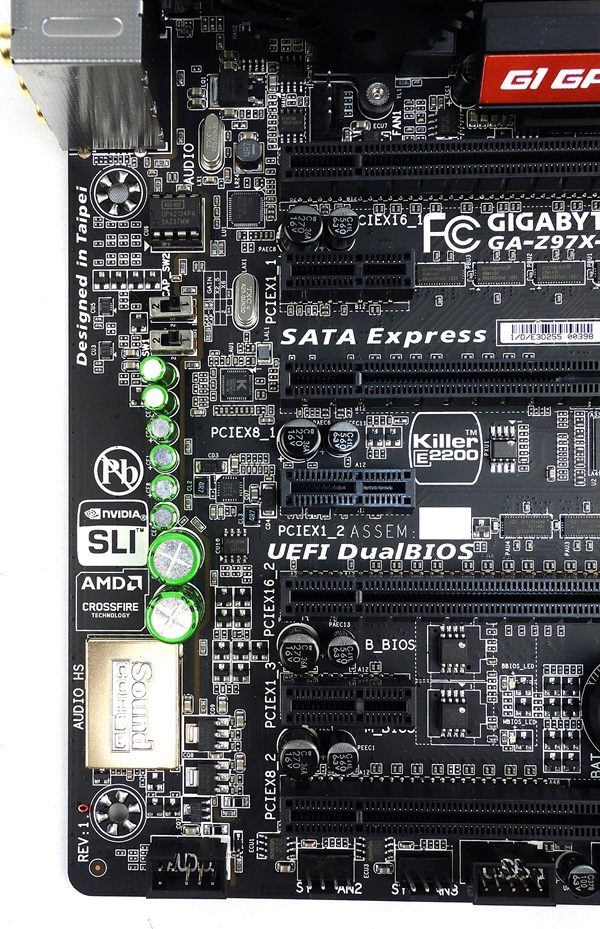 Moving on to the bottom of the board, we see, from left, a front panel audio header, two system fans headers, followed by three USB headers. Next, there are two BIOS switches; the first, the Single BIOS (SB) switch is used to toggle between single and dual BIOS modes, while the other is used to toggle between the two sets of BIOSes. There is another pair of system fan connectors next to the switches, and the front panel header is at the right most. 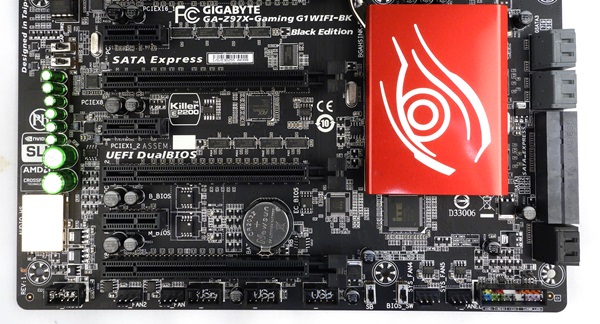 Moving along this edge of the board, there is a PCIe power connector, located next to the 24-pin ATX main power connector. This provides additional juice for stable operations, especially in the event of a multi-GPU configuration. In the vicinity of the DIMM slots, there are three buttons available for power, reset and clear CMOS functions, and a DEBUG LED segment. Near the group of buttons is a row of voltage measurement points to provide readings for a variety of CPU and memory voltages. 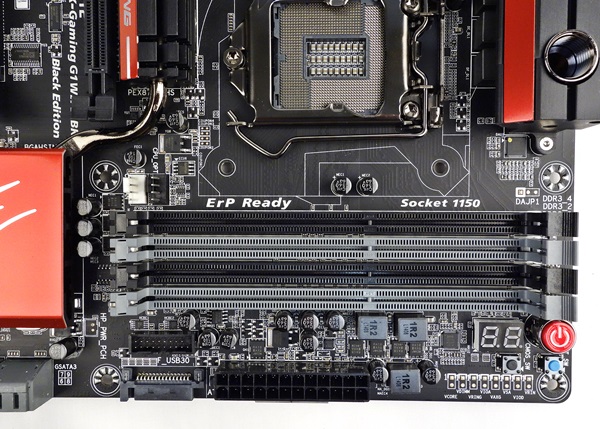 The rear I/O ports consists of a total of six USB 3.0 ports and two USB 2.0 ports (rated for low noise power delivery that are ideal to use with USB DACs) that sit atop a PS/2 keyboard and mouse combo port. Although there are two Gigabit LAN ports, the NIC teaming feature isn't supported. The video connectivity ports consists of a DVI-D port, a DisplayPort port, and a HDMI port, while the audio ports consist of five analog audio jacks with an optical S/PDIF port.

Unlike the ASUS Z97-Deluxe (NFC & WLC) motherboard, the Gigabyte board only bundled a wireless module that supports up to 802.11ac Wi-Fi and Bluetooth v4.0 connectivity. The module fits into a spare PCIe 2.0 x1 slot and has a single antenna to extend its range. The company has wisely upgraded its software utility suite, the Gigabyte App Center, to include EasyTune and Cloud Station platform. The EasyTune application allows you to set the system's performance levels using a number of presets. At the same time, it will also enable a power user to adjust system settings in the Windows environment. The Cloud Station platform provides you a number of customized applications to control the system using your mobile devices. It also has a personal cloud utility that allows you to share files and other resources. Currently, only iOS and Android devices are supported by Cloud Station. 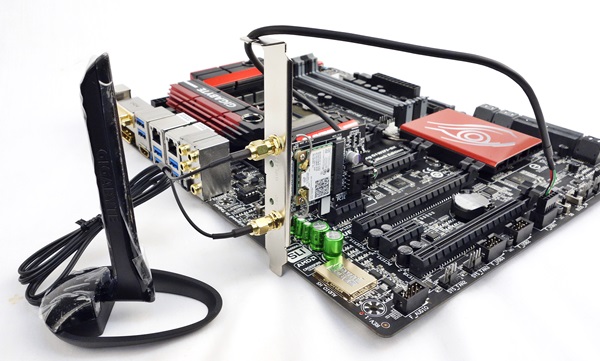 As far as we can see, the main selling point of the Gigabyte GA-Z97X-Gaming G1 WIFI-BK is its server-grade reliability that is backed by its rigorous burn-in testing. Priced at PhP 18,600, the board is rather expensive, in comparison with the similarly specced ASUS Z97-Deluxe board, and all its glorious accessories. Though some may argue about its support for liquid cooling options, a more robust Creative-powered audio solution and other esoteric features like its gold-plated AV ports and replaceable op-amp, it's still an expensive board. Would it's focused nature actually make it a better board than ASUS? We'll find out in a performance comparison article soon.