The Galaxy S5 is armed with a Qualcomm Snapdragon 801 processor, clocked at 2.5GHz, putting in on par with HTC's One M8, and slightly faster than Sony's Xperia Z2, which has a lower 2.3GHz clockspeed. The new processor uses an improved 28nm HPm process, which not only offers better CPU performance, but also better power efficiency.

We will be comparing the Galaxy S5 against the Snapdragon 801-powered HTC One M8 and Sony Xperia Z2, as well as the older Snapdragon 800-powered Samsung Galaxy S4 with LTE+ and LG G2.

SunSpider Javascript helps measure the browsing performance of a device when processing Javascript. It not only takes into consideration the underlying hardware performance, but also assesses how optimized a particular platform is at delivering a high-speed web browsing experience. The S5 scored incredibly well in this test, which is slightly suspicious, given Samsung's past history of cheating on benchmarks. Nevertheless, the S5 did deliver a smooth and responsive browsing experience and we can find no fault with it here.

Quadrant evaluates a device's CPU, memory, I/O and 3D graphics performances. The S5 performed well here, showing a 30% improvement on the old Galaxy S4 with LTE+. It also beat the slower Xperia Z2 but surprisingly was not able to keep up with the HTC One M8, despite having the same processor and RAM.

For an in-depth understanding of 3DMark for Android, do head over to our article, "3DMark - Android Device GPU Performance Review." In a nutshell, 3DMark consists of three test sections:

Once again, the S5 was outperformed by the HTC One M8, and was only slightly better than the Z2 this time. It did however show significant improvement over the Galaxy S4 with LTE+.

The Galaxy S5 is armed with a 16MP rear camera with a 1/2.6-inch sensor and an f/2.2 aperture lens. While that may not sound as impressive as some other smartphone cameras out there, like the 20.7MP Xperia Z2 or the 41MP Nokia Lumia 1020, what is impressive about the S5's camera is that it comes with phase detection autofocus. Most smartphone cameras, as well as many compact point-and-shoots, use contrast detection autofocus, which works by measuring the contrast between nearby pixels, and adjusts the camera lens until this contrast is maximized. It's okay if you're shooting a scene with clearly defined edges but it can be pretty terrible if there's not a lot of contrast (or light) to begin with.

In our tests, autofocus on the S5 wasn't always perfect, and it sometimes opted to focus on objects in the background until we selected the correct focal point, but it was generally accurate and also very fast, even in low-light situations.

Like the Xperia Z2 and the HTC One M8, the S5 camera also includes a faux bokeh mode, which will artfully blur the background of a photo for a shallow depth of field photo effect. Samsung's Selective Focus seems to have a few more restraints than either the Z2 or HTC One M8, and the mode warns you that the subject in focus should be less than 50cm away, while the background should be at least three times the distance. Once you've done the math, you can set up your shot, by pressing the selective focus button at the top of the camera app. Like the Z2, the S5 will then take two shots at different focal lengths.

Unfortunately, we had trouble getting Selective Focus to work and, even when stringently following the suggested guidelines. More often than not, we were greeted with the message "Picture Saved but unable to apply Focus Contrast effect". We're not sure if its because the camera has trouble focusing on the subject or if the background didn't have enough depth, but it was a persistent problem, no matter what subject and environment we tried. Regardless of whether Selective Focus works or not, it also always took a while for the image to be processed.

When it does work however, it looks rather good, and there's none of the obvious outlining that plagued the Z2's Background Defocus mode. You can edit your selective focus shots further, choosing either Near Focus, Far Focus, or Pan Focus where everything will be on focus. Unfortunately, you don't get a slider of sorts to self adjust the balance between near and far focus points, so you'll have to be content with either of those three focus options. 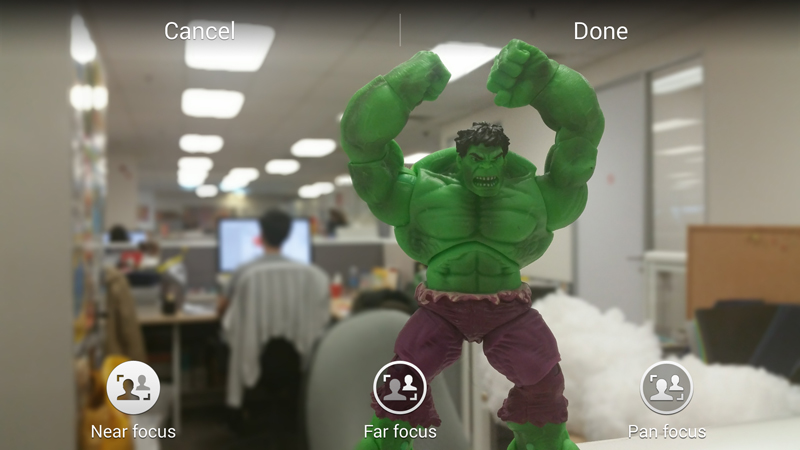 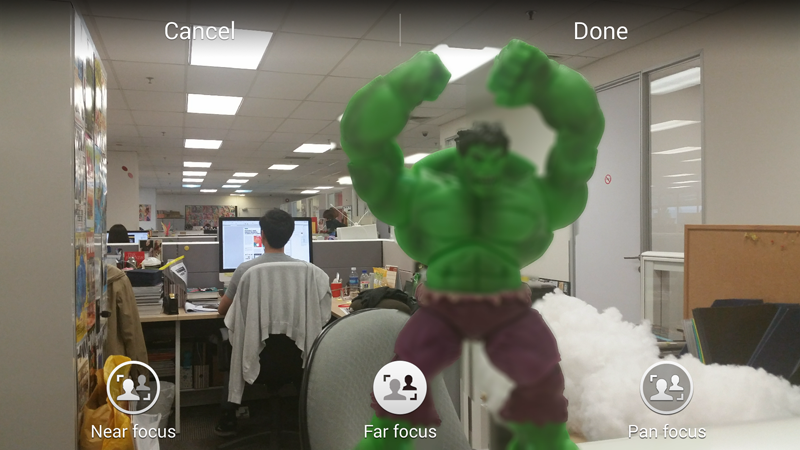 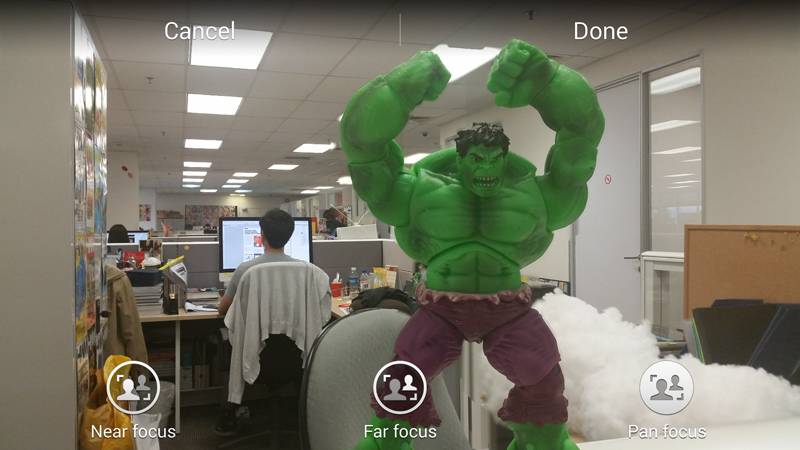 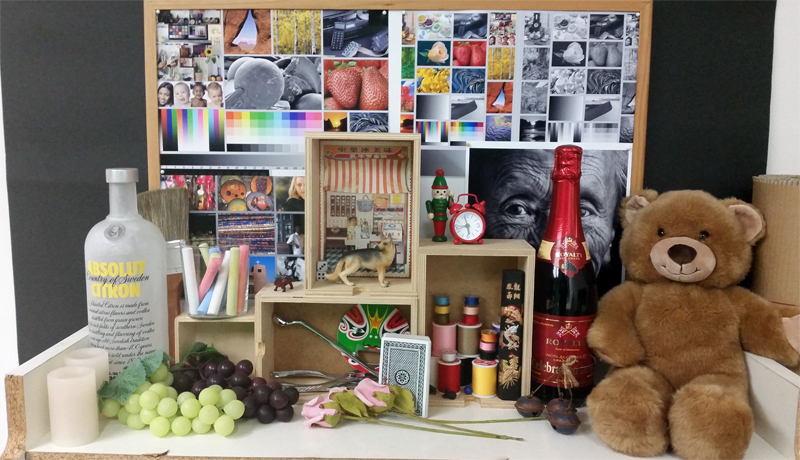 The S5 is armed with a slightly higher capacity battery than its predecessor, at 2800mAh. In our video looping test, it did very well, lasting eight hours and 36 minutes, although this still fell short of the record set by the Galaxy S4 with LTE+. Part of the reason for the S5's excellent battery life may be due to Samsung's partnership with Lucid Logic, a company that specializes in battery life optimization through software. The company offers a variety of battery saving technologies including WebXtend, NavXtend and GameXtend, all of which are packaged into the S5.

We measure the portability of a device by calculating its battery life to (weight x volume) ratio. Thanks to its lightweight plastic build and long battery life, the S5 scored well here, losing only to the Galaxy S4 with LTE+. 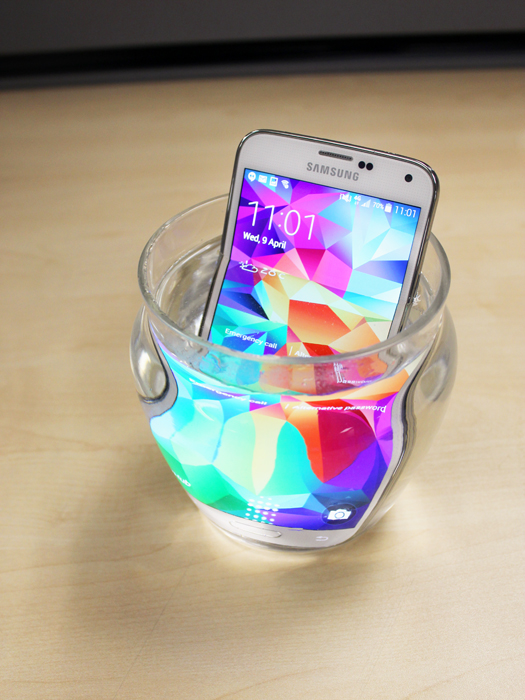 The recent flurry of flagship smartphone releases - which includes the HTC One M8, the Sony Xperia Z2, and now the Samsung Galaxy S5 - has certainly felt like an incremental evolution rather than a complete overhaul. Out of the three phones, Samsung probably offers the most new features, adding an IP67 dust and water resistant build, fingerprint scanner, heart rate sensor and phase detection autofocus. But while we appreciate Samsung's efforts to go 'back to basics' and improve core functionality, we do feel that the implementation of all four of these features was perhaps not as good as it could have been, which might somewhat spoil the user experience. As such, if you're a Galaxy S4 user, it might be prudent to wait for the next Galaxy flagship, which will undoubtedly sport improved versions of each. Having said that, personal preferences and tolerances vary among users and it's best to give the Galaxy S5 a trial before making your decision.

Samsung's design, which was already looking a bit stale a year ago, is now looking very long in the tooth, and with competitors like HTC and Sony building sleek and stylish metal and glass smartphones, it's hard not to scoff when Samsung pushes the plastic S5 as a "modern glam design". It's definitely time for Samsung to try something new, after all it's not like it can't design beautiful products without copying someone; just take a look at the Series 9 notebook.

All things considered, the S5 still offers excellent battery life, and decent overall performance, and for users who found the Galaxy Note 3 a bit too large for their liking, the S5 should fit the bill. Still, we can't help but wonder about the rumored premium Galaxy smartphone, which supposedly boasts an all-metal build and a QHD (2560 x 1440 pixels) resolution display. Samsung is certainly not shy about releasing multiple variants of the same phone, so it wouldn't be entirely surprising if an S5 Premium was on the way. It's an intriguing possibility, and if the rumors are true, it might be worth waiting for.