Running under the hood of the Samsung Galaxy Tab 2 (10.1) is a Texas Instrument OMAP 4430 dual-core 1GHz chipset supported by 1GB RAM. We were expecting to see an Exynos chipset powering the 10.1-inch slate since the Galaxy Tab 7.7 and Galaxy Tab 7.0 Plus are sporting Exynos dual-core processors.

Samsung's own Exynos processors are considered one of the top mobile processors in the market and we cannot help but feel disappointed that it is absent in the company's flagship 10.1-inch tablet. Nevertheless, we will pit the Galaxy Tab 2 (10.1) against similar tablets such as its predecessor and the Motorola Xoom 2.

The following benchmarks were used for raw performance evaluation: 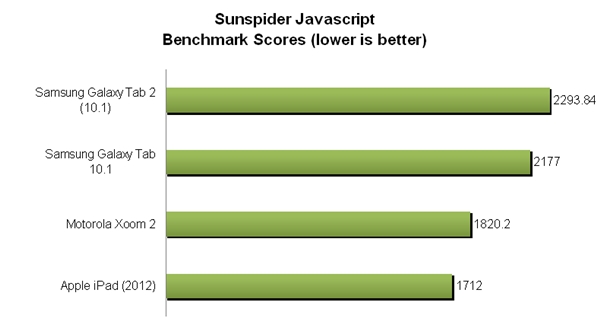 As you can see, the Galaxy Tab 2 (10.1) exhibited somewhat less than comparable performance as it struggled to keep up with the other 10.1-inch tablets in the benchmarks. It's strange that despite running on the same processor, the Motorola Xoom 2 outclassed the Samsung slate in all benchmarks. Besides acknowledging the fact that the Xoom 2 has a higher clock speed of 1.2GHz, we believe Motorola optimized the processor to run more efficiently with the Android OS.

Number crunching aside, the actual real-world usage performance of the Galaxy Tab 2 (10.1) is below average for an Android 4.0 tablet. While sideway navigation seemed effortless and swift, we couldn't say the same for opening apps, accessing the app launcher and jumping between apps. At times, we experienced noticeable pauses and lags. This is not entirely unexpected since similar issues can be found across Android devices with customized Android interfaces. Still, it would have been better if this issue was resolved in the latest crop of tablets.

It seems that the Galaxy Tab 7.7 is the only Samsung slate in the tablet lineup to receive some AMOLED love as the Galaxy Tab 2 (10.1) is equipped with a 10.1-inch PLS TFT display. While the display is quite decent with good viewing angles and color reproduction, it lacks the vibrancy and brightness of AMOLED displays.The display also sees no bump in resolution and stays at 1280 x 800 pixels resolution, which translates to a pixel density of 149ppi. This is a far cry from the Apple iPad (2012)'s Retina display which boasts 264ppi pixel density.

The two speakers flanking the side of the 10.1-inch display are actually quite good. The audio output is quite loud and doesn't sound shallow compared to the other tablets, and is definitely audible enough for watching videos in an enclosed area.

If you are looking beyond Samsung's 7-inch tablets for telephony functions, you may want to consider the Galaxy Tab 2 (10.1) as it comes with voice call capability. However, do take note that there is no earpiece, hence you have to turn on the loudspeaker or pair the tablet with a headset.

The imaging department appears to receive no attention from the Samsung's engineering team as it still houses a 3-megapixel rear camera. On closer inspection of the specs sheet, one will realize it's actually a downgrade as the camera module is fixed focus, not the autofocus one we've seen in the first Galaxy Tab 10.1. In addition, the front facing camera is downsized to VGA resolution from 2-megapixel initially. This may be a cause of concern for users who do engage in video chats often on their tablets. 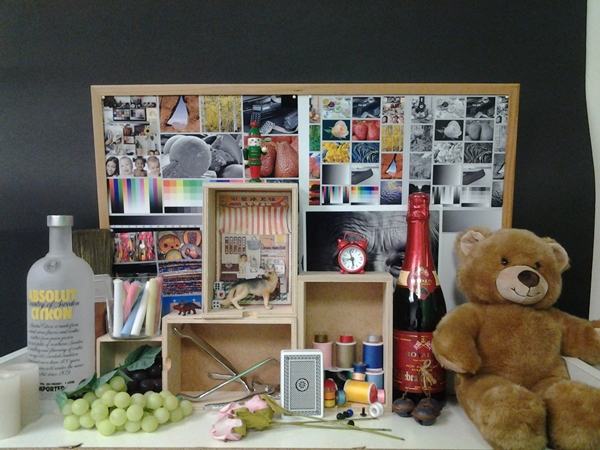 The last benchmark is the battery performance section, where we evaluate the Samsung Galaxy Tab 2 (10.1) through our standard battery test which includes: Based on the results above, you can see that the Samsung Galaxy Tab 2 (10.1) has an improved battery mileage of 6 hours and 14 minutes, which is about half an hour more than the first Galaxy Tab 10.1. In case you are wondering why the Apple iPad (2012) has a lower battery uptime, you can check out our detailed explanation in our review here. Due to its bulkier form factor, the Galaxy Tab 2 (10.1) stumbled a step behind its predecessor in our Portability Index in spite of its better battery life.

Aside from our benchmark-based battery testing, the Galaxy Tab 2 (10.1) was able to last us close to a day and a half with occasional web surfing, checking social feeds and replying emails in our actual field usage. As our battery benchmark test simulates fairly stressful usage conditions, we believe it is able to last much longer under normal day-to-day usage conditions. After all, actual battery mileage will vary under different usage conditions.

To be frank, we find the Samsung Galaxy Tab 2 (10.1) to be an oddball. Tipped as the successor, it does not offer any convincing performance improvements over the first Galaxy Tab 10.1 other than the battery mileage. It looked as though Samsung introduced this tablet half heartedly into the market when competitors are already leaps and bounds ahead of it. The Samsung Galaxy Tab 2 (10.1) could have been more compelling if the company opted for an AMOLED display, a better processor and minimize the occasional sluggish performance. On a positive note, the build quality is commendable for a tablet chassis made up of plastic and is portable enough for daily usage.