Flash in your pocket 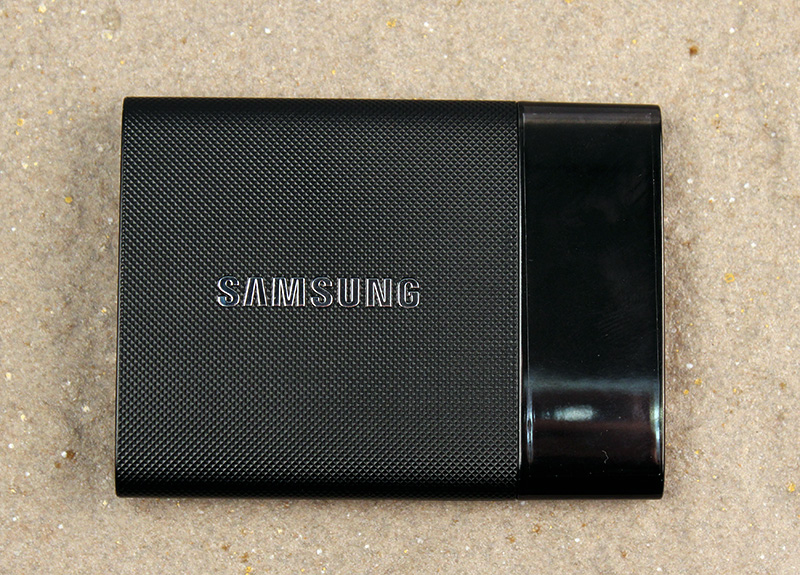 Samsung is one of the biggest manufacturers of SSDs and NAND memory. Most recently, the company made headlines for being the first to release SSDs using new 3D V-NAND. We wrote about 3D V-NAND extensively in our review of Samsung SSD 850 Pro - the first SSD to use 3D V-NAND - so if you are scratching your head about 3D V-NAND, you might want to read that first.

But to put it very briefly, 3D V-NAND stacks memory cells on top of each other in order to overcome the problem of squeezing cells closer and closer together, as is the case with existing 2D planar architecture and technology. Samsung then followed up the SSD 850 Pro with the SSD 850 Evo late last year, which uses 3D TLC (Triple Level Cell) NAND. We wrote about TLC NAND in great detail during our review of the older SSD 840 Evo, but again to be put it briefly, TLC NAND increases memory density but at the cost of performance and endurance. However, TLC NAND is much more cost effective and affordable, which makes it good for mainstream consumer applications. 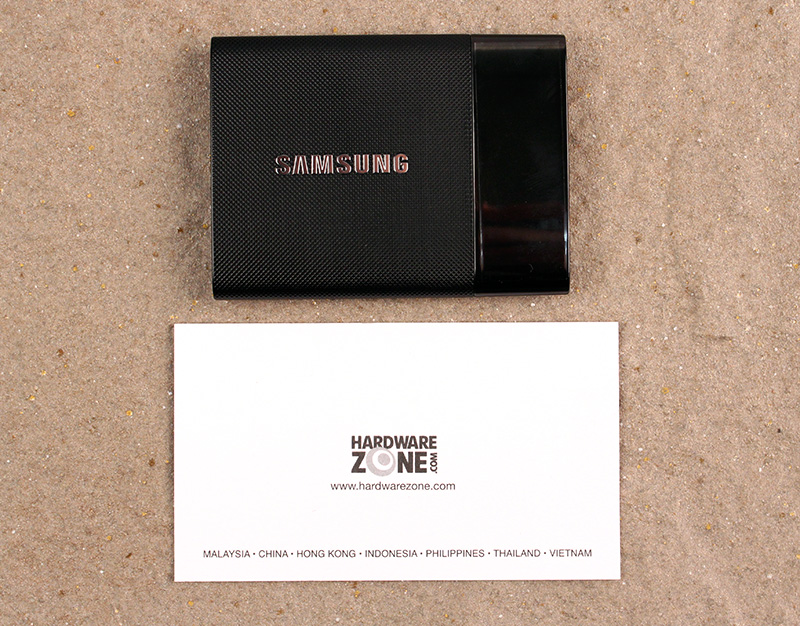 This brings us neatly to Samsung’s new portable external hard disk, the Portable SSD T1. It’s a portable SSD that comes in an extremely compact form factor that is smaller than name cards and credit cards, and measures just 9mm thick. It is featherlight too, weighing just 30g or so. It is attractively styled too, featuring a mix of textured and smooth surfaces. Unfortunately, the supplied USB ribbon cable is clumsy and makes the Portable SSD T1 less portable than it would have been. An integrated retractable USB connector would have been a much more elegant solution.

Inside, users will find a drive that closely related to the SSD 850 Evo. As a result, the Portable SSD T1 uses the same MGX controller and features technology like TurboWrite. TurboWrite dedicates a small portion of its TLC NAND to work as an SLC write buffer. This helps boost its write performance to make up for the shortcoming of TLC NAND, which typically suffers from inferior write performance. Judging from our past experience with the SSD 850 Evo and SSD 840 Evo, TurboWrite does significantly boost write speeds, so we can't wait to see what kind of effect it will have on the Portable SSD T1's performance. 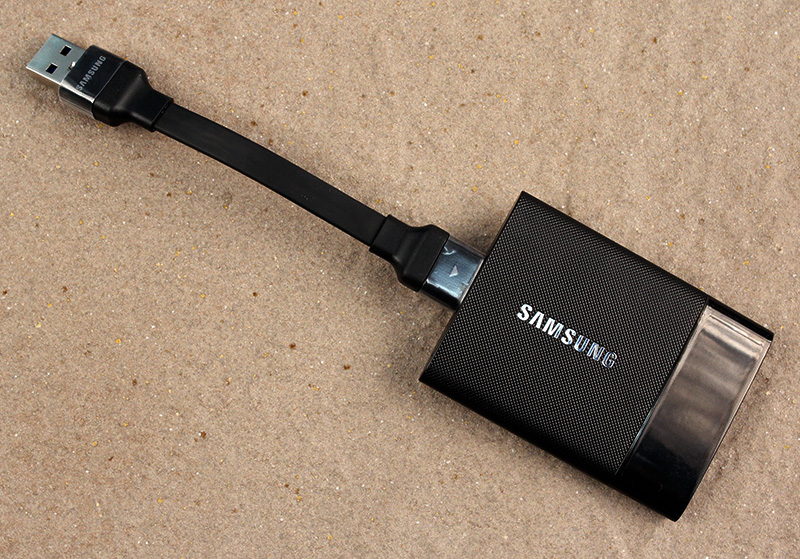 The Samsung Portable SSD T1 uses a SATA to USB bridge for USB 3.0 functionality. USB 3.0 offers a maximum data transfer rate of 5Gbps or 625MB/s, slightly lower than that of SATA 6Gbps, so we are expecting performance to suffer a bit, especially after factoring overheads, when compared to the SSD 850 Evo. But even so, it should still be miles faster than any other mechanical portable external hard disk drive.

The Portable SSD T1 also supports UASP (USB Attached SCSI) protocol, which is a often overlooked standard aimed at improving USB 3.0 performance by transferring data and commands in separate "pipes" and executing multiple commands in parallel. So if you have a compatible system (most modern systems running Windows 8 and Mac OS X 10.8 and above should support UASP), one can expect better performance.

If any of the above is not met, the UASP mode will not be enabled in the drive. That said, the benefits are only appreciable in random reads (that's where commands and data gets queued) and it varies quite greatly because so much of its performance potential is dependent on firmware and drivers, so there's no need to get overly worried or flustered if your system doesn't support UASP or you cannot get UASP to work. 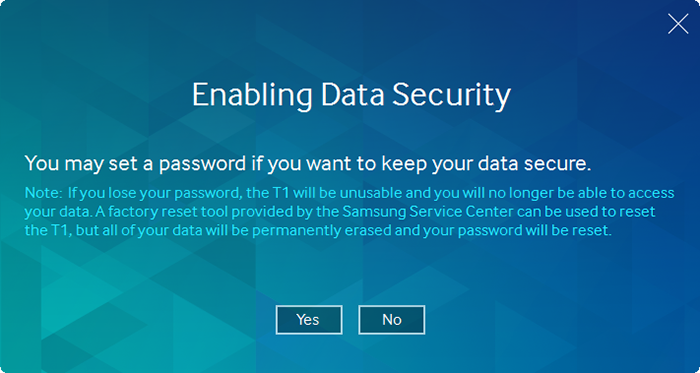 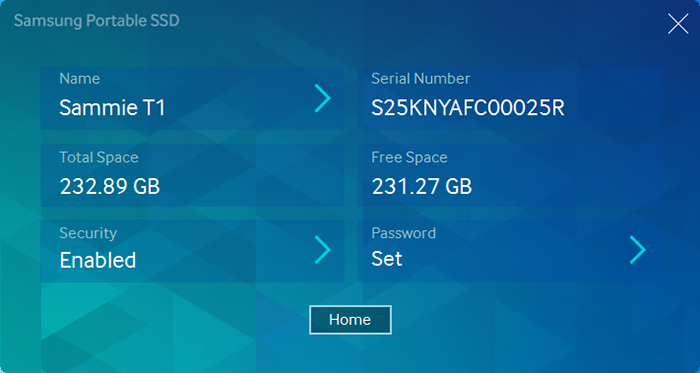 The Samsung Portable SSD T1 is PC and Mac compatible, although Mac users will have to download a SCSI ATA Transition driver for the drive to work. Upon attaching the drive, a 128MB partition will launch itself with two setup files for Windows and Mac machines. Run it and you will be prompted to input a password to secure the drive. You will be prompted for this password in future whenever you attach the drive. Without it, you will not be able to access your files and the drive will not work. It's worth noting that the password cannot be reset. If you forget your password, you will have to bring the drive in to the service center where they will have to reset your drive. It goes without saying that doing so would also mean losing all data on the drive. It sounds a bit drastic, but it is a price that we will gladly pay for utmost security.

The Samsung Portable SSD T1 will be tested using our regular storage benchmarking testbed which has the following specifications:

To test the drive, we will be putting it through some of our usual storage benchmarks. We will also compare it against other portable external hard disk drives we have reviewed. The most interesting match up here is arguably against the Transcend ESD200, which is a portable SSD just like the Samsung Portable SSD T1. The full list of benchmarks and drives tested are as follows: