Seagate Wireless Plus (1TB) - The Successor to GoFlex Satellite

In a nutshell, the Seagate Wireless Plus is a mobile wireless media streamer. It has 1TB of capacity and you can use it to store just about anything for sharing - movies, music, photos or documents. It then broadcasts a Wi-Fi signal so that surrounding devices with Wi-Fi capability can access the content that’s stored on it. This is a good means of expanding storage on devices with limited options, such as iPhones and iPads, which don’t have expandable memory card slots. 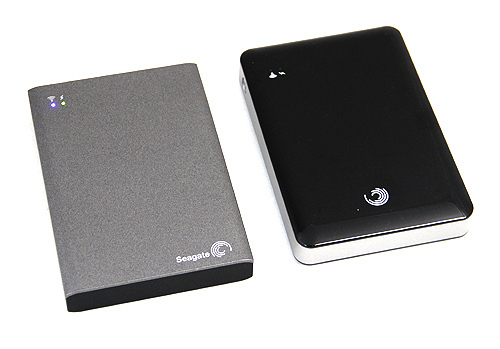 Elsewhere, the new Wireless Plus also comes with Seagate’s unique interchangeable interface adapters or USM (Universal Storage Module). This means that you can swap out the default USB 3.0 adapter for optional Thunderbolt and FireWire adapters (sold separately). For the PC-DIY folks, you might also want to note that without the adapter, it can hook up to a system directly via SATA data and power cables.

Under the hood, the Wireless Plus now has double the capacity of the old GoFlex Satellite with 1TB of storage. Seagate also claims a 10-hour battery life on a single charge, which is double that of the GoFlex Satellite. Otherwise, the two drives are similar in that they both support Apple AirPlay, and DLNA streaming to compatible gaming consoles, media players and Smart TVs. Speaking of Smart TVs, Seagate says that they are working on an app that will let Wireless Plus stream directly to Samsung Smart TVs.

The drive can be accessed via the new Seagate Media app (available on iOS and Android) or through the respective device's web browser. But before beginning to stream content, it is advisable to do some basic setup first. The first thing you would want to do is to set a password to restrict unauthorized access to the drive. Next, the Wireless Plus drive can act as a Wi-Fi bridge, so it is best to pair the drive up with an existing Wi-Fi connection first so that you can still retain Internet connectivity whilst connected to the Wireless Plus. The Seagate Wireless Plus supports Wireless 802.11 b/g/n standards, so you shouldn't have problems pairing it with older notebooks, tablets or smartphones.

You can add content to the drive using the USB 3.0 adapter and transfers speeds are what you’d expect from a USB 3.0 drive. It took us 18.4 seconds to transfer a 1.7GB movie from our storage testbed to the Wireless Plus, one of the quicker timings we’ve recorded in our labs.