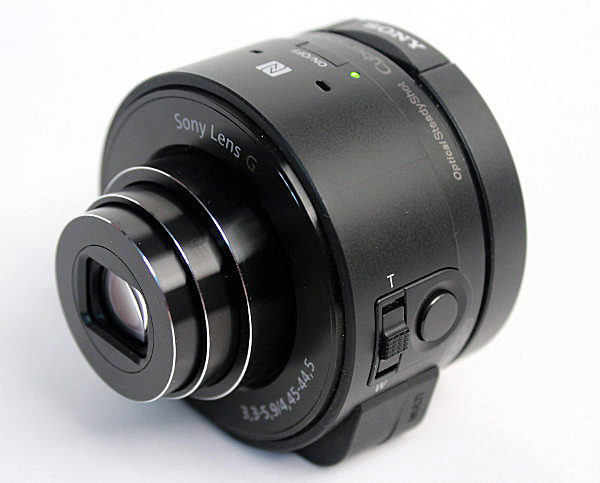 Editor's note: Parts of this review are from our initial hands-on article where we talked about design, software, and handling. If you're looking for our verdict, feel free to jump to page 2.

With digital compact camera sales dropping due to the rise of smartphone photography, compact camera manufacturers have been trying to come up with a solution to this issue. It appears Sony aims to tackle this issue with its new line of Cyber-shot cameras, the Cyber-shot DSC-QX10 and QX100. These odd-looking gadgets may look like lens attachments, they are actually cameras in their own right.

The QX10 for example, features a /2.3-inch-type, 18.2-megapixel Exmor R CMOS sensor with a Sony G lens that’s capable of 10x optical zoom. While compact cameras are meant to be used separately from your smartphones, the QX10 and QX100 are designed to be used together with your phone. With a larger sensor as well as the ability to zoom optically, will the QX10 and QX100 tempt those who are unsatisfied with the quality of their smartphone pictures?

We will be reviewing the QX10 and as you’d have guessed by now, the smartphone is used as the camera’s LCD monitor, with the only physical controls and buttons on the QX10 being the power button, zoom rocker and shutter release button. To control the camera, a mobile app is needed. This app is called PlayMemories Mobile, and it’s available on both the Google Play Store and Apple App Store. On Android, after installing, fire up the app, select the SSID, and input the password - both of which are printed on the cover of the instruction manual and under the battery compartment cover.

When this is done, the camera will be connected to your smartphone over Wi-Fi. In fact, if your phone is NFC-enabled, the process is much simpler - touch your NFC-enabled phone against the N mark on the camera for a couple of seconds until the PlayMemories Mobile app launches will pair up the devices.

For iOS, connecting both devices requires a few more steps. In a nutshell, you’ve to go to the Wi-Fi section in the Settings app to select the SSID and enter the password. You then return to the home screen and launch the PlayMemories Mobile app. 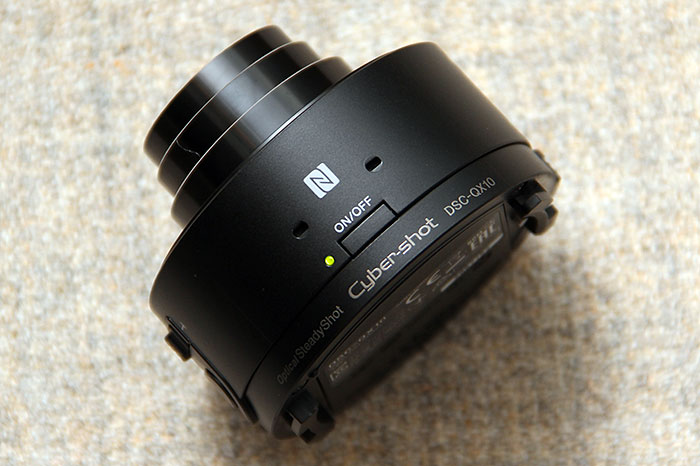 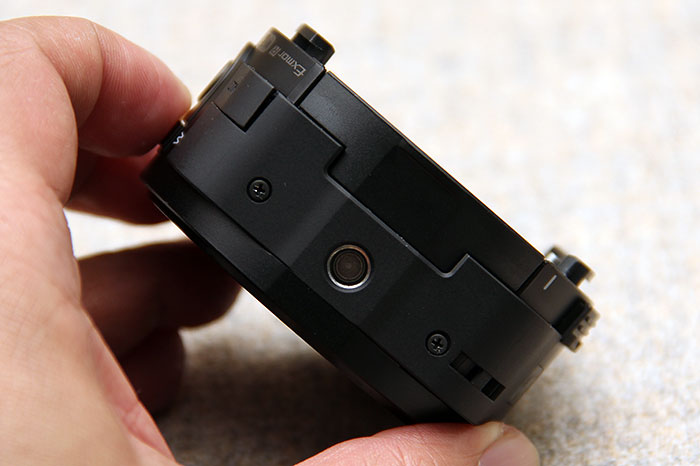 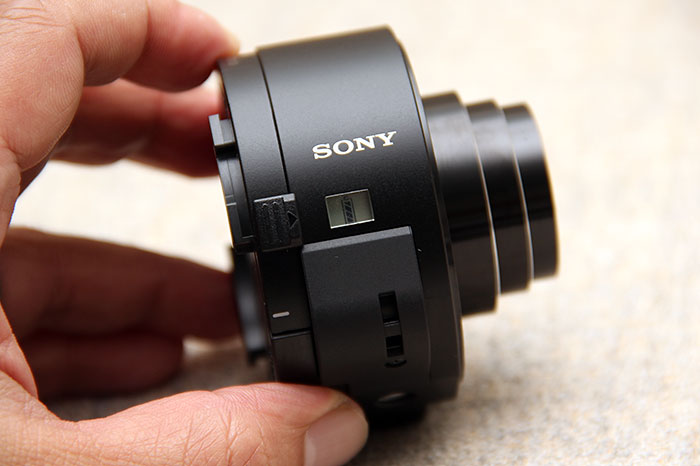 Once you have connected your smartphone to the QX10, you can start shooting with the QX10. The good thing about the QX10 is that it does not need to be attached to your smartphone, the camera itself can be placed elsewhere for creative shots or self-portraits (or selfies as they’re commonly known as). Its flat base means you can rest it somewhere for long exposures. And the QX10 also comes with a tripod socket on its bottom, so you can mount it on a tripod if you need a steadier shot. And while the built-in flash units found in compact cameras may not be something to boast about, at least you have the option when you need a bit more light. Unfortunately, the QX10 does not come with flash, and there’s no way to use the flash found on the smartphone we were using to control the QX10. 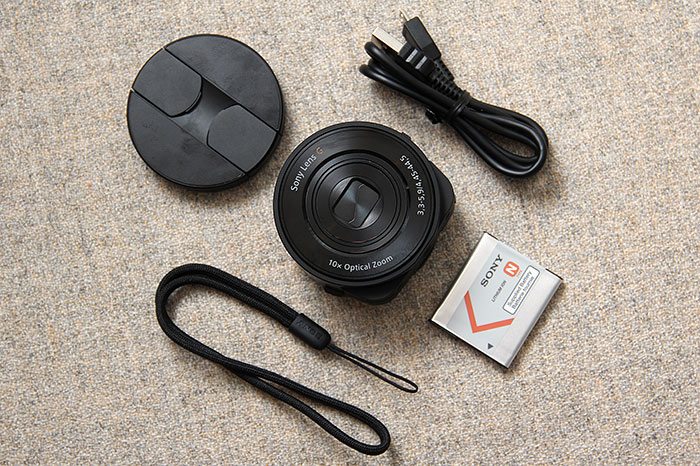 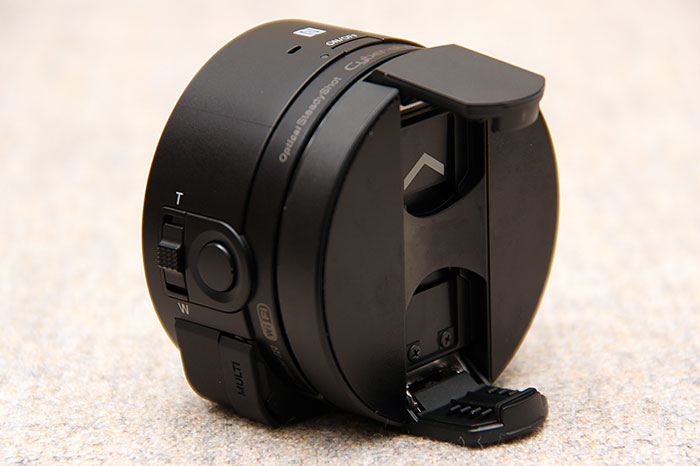 Even though the QX10 does not come with an LCD monitor, it still requires power to run and that’s where its internal 3.6V, 630mAh (2.3Wh) lithium-ion battery comes into the picture. The QX10 is charged with a micro-USB-to-USB cable, with a charge supposed to last 220 shots according to CIPA standards. Speaking of its charging cable, the QX10 does not come with an AC adapter, so you will have to buy one from Sony if you want to charge it via a power outlet. Opening the plastic battery compartment cover will also reveals the tiny memory card slot: either a microSD card (including microSDXC) or a Memory Stick Micro (M2) card can be used.

Despite being a version 1 device, the QX10 actually works quite well. The PlayMemories Mobile app’s (we tested the Android version) shooting interface resembles very much like a digital camera’s (duh!). You can use the onscreen buttons to zoom in and out and release the shutter, or if you prefer, you can use the physical controls that are on the camera. For focusing, just tap on the subject on the screen. During our testing, this was a hit-and-miss affair: often, some areas in the frame will not have the green in-focus indication. You can also half-press the shutter button on the camera to focus, but the focus point doesn’t show on the screen.

Pressing the icon on the top left brings up a popup menu where you can choose other photo shooting modes. By default, it’s set to Intelligent Auto, but there are also Superior Auto, and Program Auto. Superior Auto raises the ISO limit from 3,200 to 12,800, and while Program Auto caps this back to ISO 1,600, it gives you additional adjustments for EV (–2 to +2), and white balance (seven of them, including auto white balance). The QX10 is a point-and-shoot at heart, and this means that most of the work will be done by the camera. While this may seem ideal for the casual shooter, the more discerning shutterbug may lament the inability to even adjust ISO sensitivities.

Hitting the play button on the top right opens the Gallery app to view your photos; hitting the mode button on the bottom right allows you to select movie shooting mode. The icon on the bottom left is the settings button. You can turn on self-timer (2 or 10 seconds), change image resolution (the lowest is 5MP for a 4:3 image, or 2MP for a 16:9 image), change the size of review image, format the memory card, copy photos over from the connected device, and more. By default, the original 18MP photos are saved in the memory card on the camera, only 2MP photos are transmitted for image review. You can choose whether or not to save these review images. For movies, they’re recorded on the card, but are not automatically transferred to the phone.