While users might prefer a bigger screen for their mobile entertainment needs, the Ray isn’t all that disadvantageous for multimedia purposes. Like the Arc and the new Mini series, the mobile device is packed with the Mobile Bravia Engine to enhance its display. Because of its high 854 x 480-pixel screen, images and videos appeared extremely crisp and sharp. With its 3.3-inch display, you can expect a high pixels-per-inch density on the Ray, bringing sharper and finer details to your images and videos. Coupled with a reasonable 1GHz processor and 512MB of RAM, the phone ran speedily without any incident, even while running several apps and games in the background. 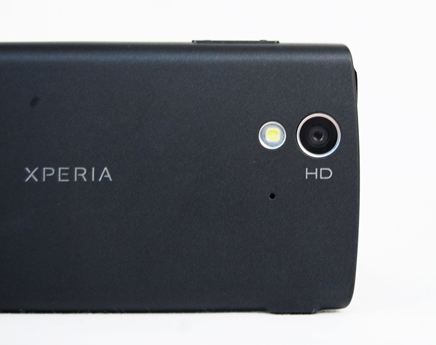 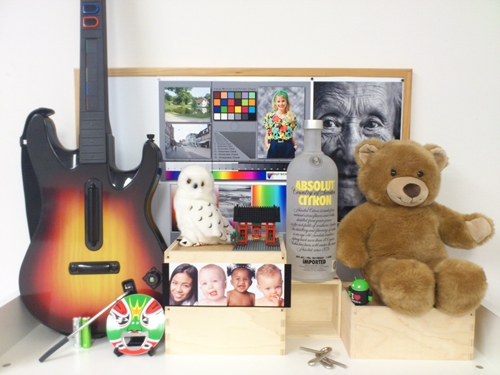 Like its bigger cousin, the Xperia Arc, the Xperia Ray comes with an 8.1-megapixel (using a backlit Exmor R sensor) camera with autofocus. We were impressed the imaging experience - auto-focus was extremely speedy; colors were accurate and nicely-saturated. We noticed our night shots have relatively high levels of noise, but it isn’t a big deterrent from a purchase. The main drawback here is that in a bid to keep the phone as minimalist as possible, there's no physical camera shortcut button.

Our final performance benchmark is our regular battery test. This consists of comparing the smartphone to a select group of devices chosen based on their similarities across battery capacities, display sizes, resolutions and processing power. Our testing methodology involves testing a video with a 480 x 800 pixels resolution looping under the following conditions:

We have decided to compare the phone based on primarily two sets of attributes: processing power and screen size. The first group includes devices that come with similar screen proportions to check on the Ray's performance with a smaller screen. The Ray is also compared against its bigger cousin once more, with the same dual-core smartphones lined up to see if the single-core device has a distinct advantage over the faster devices in battery mileage. The devices in question include the BlackBerry Torch 9810, BlackBerry Bold 9900, HTC Sensation, Samsung Galaxy S II and Sony Ericsson Xperia Arc. 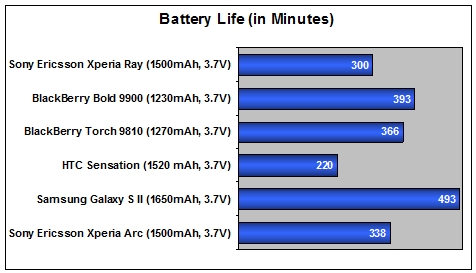 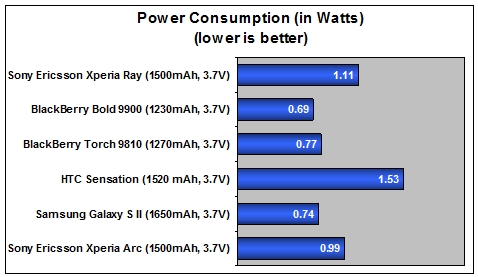 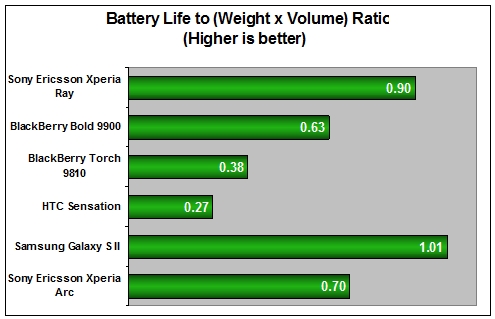 Compared to the two BlackBerry handsets, the Xperia Ray's battery life seemed to fare relatively worse. Out of the lot, the BlackBerry Torch's screen size of 3.2 inches is the closest to Ray's 3.3 inches. While it's unfair to compare them based on screen size alone (and not to consider other factors like operating systems, pixel count and additional screen enhancements like Mobile Bravia Engine), the numbers give a rough gauge of what consumers should expect in terms of battery life from phones with smaller touchscreens. We wouldn't say that the Xperia Ray fared badly here, but we were definitely expecting better results.

We were relatively disappointed when it came down to comparing the Xperia Ray's battery life to the Arc's. Since both phones house similar hardware and identical battery capacities, we were expecting the Ray to outlast its bigger cousin due to its smaller screen. But the Ray didn't and fell short of meeting the Arc's result of 338 minutes in our tests. Due to the phone's slim dimensions and lightweight body (it is the lightest of the bunch at 100g), it scores quite well in our portability index, landing in second place just below the Samsung Galaxy S II. Its small and compact build compensate for its average battery performance, so this is evidently where its strengths are.

All in all, the Xperia Ray straddles the middle ground in terms of battery life; it isn't fantastic but neither is it terrible. Notably, while rationing the phone for normal day-to-day operations, the phone could last for at least a full day.